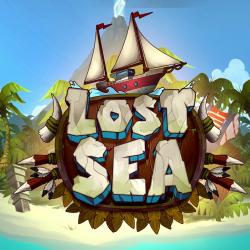 Single player
Local Multiplayer
Online Multiplayer
Co-operative
In Lost Sea, the threat of permadeath looms over a daring escape from the mysterious Bermuda Triangle. Is its mobile-like structure fun enough to be a decent console experience?

There's no place like home; and home is exactly where the player seeks to go in this title as they traverse various deadly reefs with diverse biomes. Stuck in the Bermuda Triangle, the player must explore islands to find ancient tablets which allow their ship to progress towards the exit portal. Countless enemies teem the islands, as do numerous other adventurers who can be recruited as companions, all tied together by the threat of permadeath and a loss of progression upon defeat.

Combat here is simple; the primary weapon is a machete, and others can be found in various chests along the journey. A top-down style of gameplay reminiscent of many mobile games, allows for simple third-person combat with no frills. The various islands contain hidden stone tablets which control how far the player is able to move on the map; each tablet is inscribed by a number which determines how many islands the player can travel to in order to get to the exit at the end of the chain. Companions with various skills can be enlisted as they are found on the islands, however they mostly can't travel with you to the next island. This makes their use very situational, with most abilities helping the player get around obstacles or find extra loot on the island. Various player upgrades can be purchased with the loot collected from killing enemies. 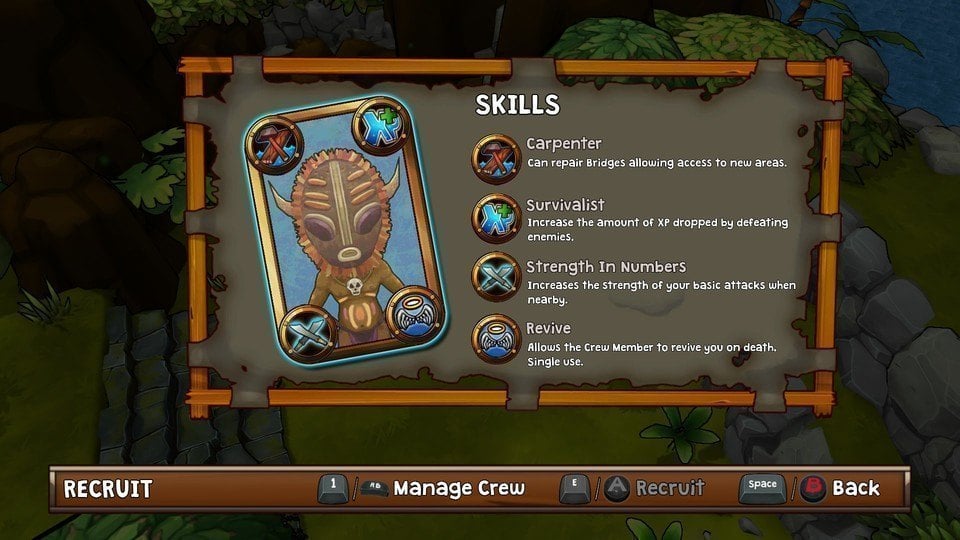 Here's the kicker: if the player is defeated in combat, they are forced to start again all the way at the beginning of their journey without any upgrades or companions with them. Certain small bonuses can be gained based on items collected from the now-defunct previous world. I experienced a lot of frustration with this system, as the combat is so simple that cheap hits can force you to forego all progress. A warp function can be used to fast travel to previously discovered worlds at the start, but this puts you at a major handicap due to a lack of upgrades and equipment. Unfortunately the permadeath system makes this feel more like a mobile game than anything else, considering that spending 2 hours without making any progress isn't something that most console games encourage. It makes the game fun to jump into for a short period of time but excruciating to play any longer.

It's especially hard to group this title into a specific genre. It lies somewhat in the vein of a hack-n-slash action-adventure, however the permadeath adds a roguelike element as well. No specific type of gamer would enjoy this title more than another, making it a pretty fun experience for everyone. Though permadeath creates unneeded stress and frustration, its map mechanics are unique and almost board game-like, and the combat and exploration is relaxing and fun. It's a great game to play for a bit just to pass the time, as it doesn't take much to jump in and have some fun navigating the randomly-generated islands. The small amount of boss battles bring something new to the table each time, and I really enjoyed them.

Lost Sea is presented fantastically in all areas. Its cel-shaded art style looks amazing despite the small team of devs behind the game. Tons of different biomes are seen throughout the course of the title, and all have a wonderful aesthetic that makes the game fun to just look at and get lost in. 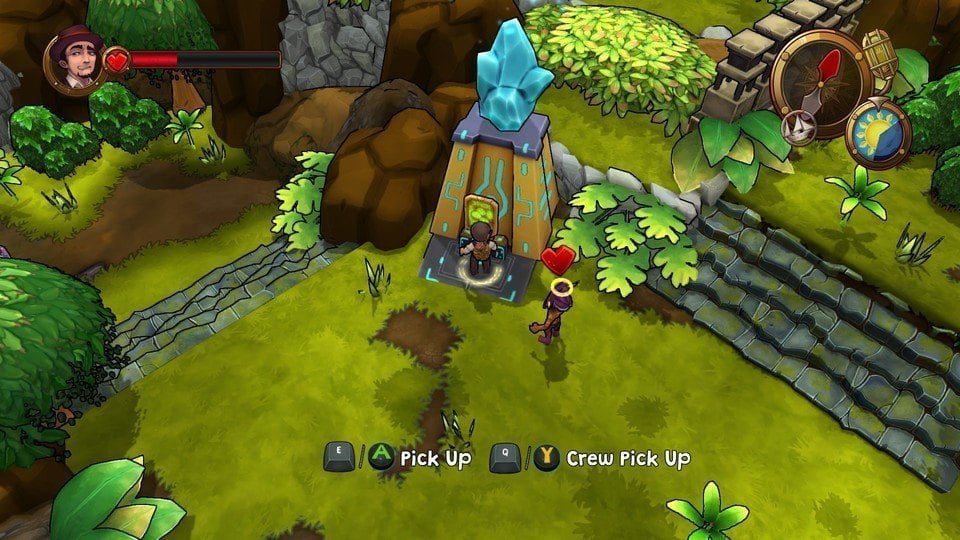 The music is fittingly unbelievable; though the soundtrack is not particularly long, each piece is wonderfully orchestrated and perfectly matches the atmosphere of each biome. Though the story is not complex, it's definitely not the focus of title. The mysterious atmosphere of the Bermuda Triangle provides a nice background on which to display stunning visuals and popping music; in both areas, the devs knocked it out of the park.

What We Liked ...
What We Didn't Like ...
7
Gameplay
Unique mechanics would make this title a must-buy on mobile devices, but on a console the frustration created by its roguelike elements proves overwhelming.
8
Presentation
Music and visuals both stick to a style which is vibrant and colorful at all times, perfectly matching the environment of every area.
7
Lasting Appeal
The game is fun in short bursts, but it is not terribly long and the player gets punished for playing for long periods of time.
7.5
out of 10

Lost Sea is a unique title that provides a new, casual experience that holds its own on consoles. Though it is not suitable for long play times, it's a great game to kick back and relax with. The colorful world and unique mechanics leave the player with a sense of satisfaction-- until they die and all of that slips away in an instant.
Reactions: Ericzander, FrozenIndignatio, Chary and 1 other person
Share:
Facebook Twitter Reddit Pinterest Tumblr WhatsApp Email Share Link
It's worth noting that is the same developer as Rainbow Moon, a pretty good SRPG with a sequel due soon called Rainbow Skies.
Reactions: endoverend
I have played games like this in my phone itself.
I think a game for PS4 ,Xbox One should have more graphics.
I think the story will be interesting.