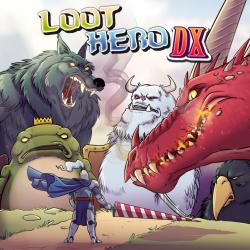 Slaying a dragon isn't cheap. Luckily there's plenty of funds in Loot Hero DX, but should you and your wallet run towards or away from this indie?

​
Gimme the Loot!
An ancient and evil dragon has ravaged the kingdom and dark creatures now roam the land in its wake. You assume the role of the titular Loot Hero and venture forth to get that sweet loot and slay the dragon. And that's it for the story. It's a pretty simple but it doesn't really need much more than that, since it is a pretty simple game in all aspects itself. 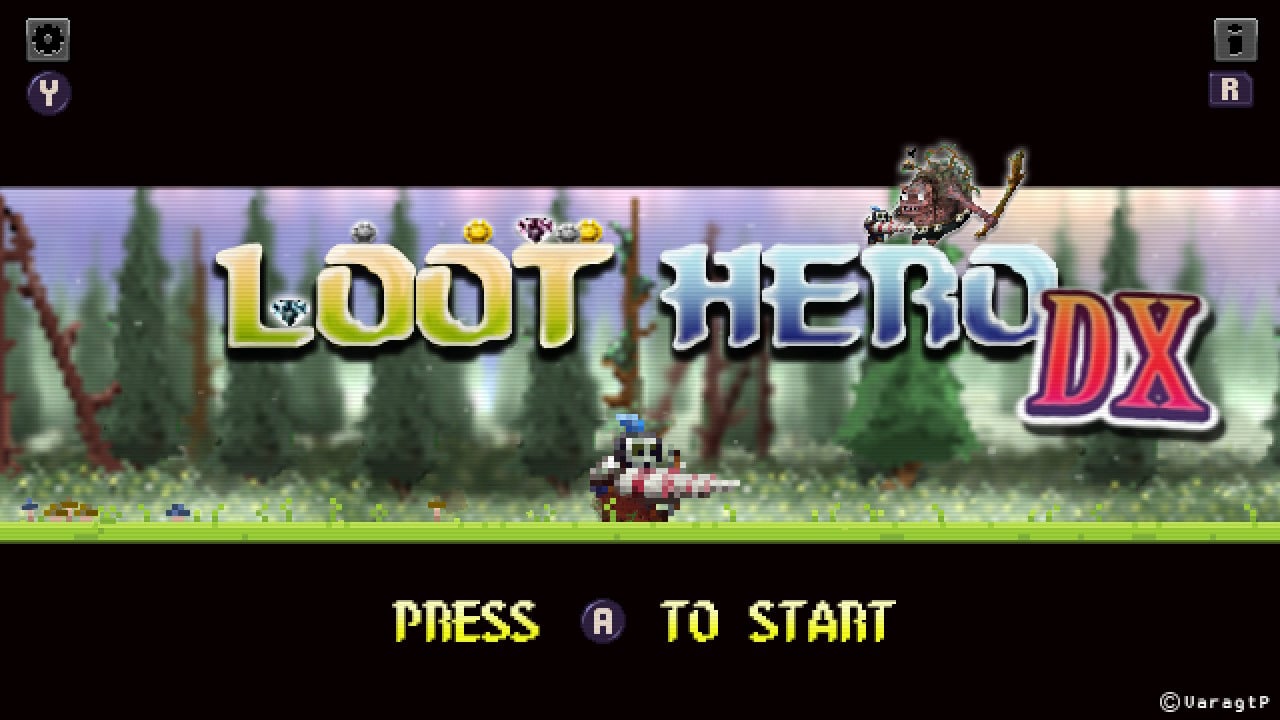 ​
The gameplay in Loot Hero DX is as simple as the story is. You move and plough straight into enemies, dealing and taking damage at the same time until you smash into the stage boss and achieve victory. Enemies grant loot and experience points needed to level up, though levelling up isn't the only way to increase your four stats. In each of the nine stages, there are six buildings between each section of enemies standing before the boss, where you can both heal damage and can spend that loot acquired on stat increases. You can choose between Attack, Critical, Defense, and Speed, with each subsequent upgrade costing more loot. You can't just run from the left to the right and expect to win, not without running back and forth to grind for exp and loot. If your health is depleted, you lose some loot and go back to the last building you passed. Once you do clear a stage, you can move on to the next and do that grind loop all over again. It's a little mindless but it's fast paced enough that it doesn't become outright repetitive, at least not initially. It takes more or less 30 minutes to clear the first 9 levels and once you have slayed the dragon, you are greeted with a couple of messages. The first being that you may choose any of the nine stages, which now have tougher enemies and greater exp/loot rewards. The second is that you have rescued a miner, who will work the Mines for you, even when you aren't playing the game. This is a nice way to acquire loot and gathers at a steady pace, so it's worth checking every now and again.

Unfortunately, this is the part of the game that lost me. Once you beat the last stage you can replay any of the previous stages, and slaying the dragon unlocks another miner and further increases the difficulty. There are no new stages, more enemies, or elements to gameplay. You just do that grind loop again and again. It does a decent enough job not being tedious right away but after an hour or so later, it becomes a chore. It's a bit of a bummer because it's a pretty solid little indie, but it just doesn't do enough to keep you engaged. While the first couple of playthroughs have some challenge, once you get the hang of stat increasing, enemies are little more than speed bumps slowing you down, even with the increase to the damage the deal and take. The other increase is the amount of experience needed to level up, which naturally goes up but doesn't seem to do so proportionally to what enemies are giving out, which requires more tedious grinding. I was hopeful that perhaps there would be additional stages with new enemy types, granted all enemies behave the same; They just stand there; bosses too. It's not awful, but the enemies in the first stage are the same as those in the fifth and last stages, just different stats and sprites. After two hours and several cycles later, I realised this was about it. It started pretty enjoyable for how simple it is but eventually became tiresome and dull. 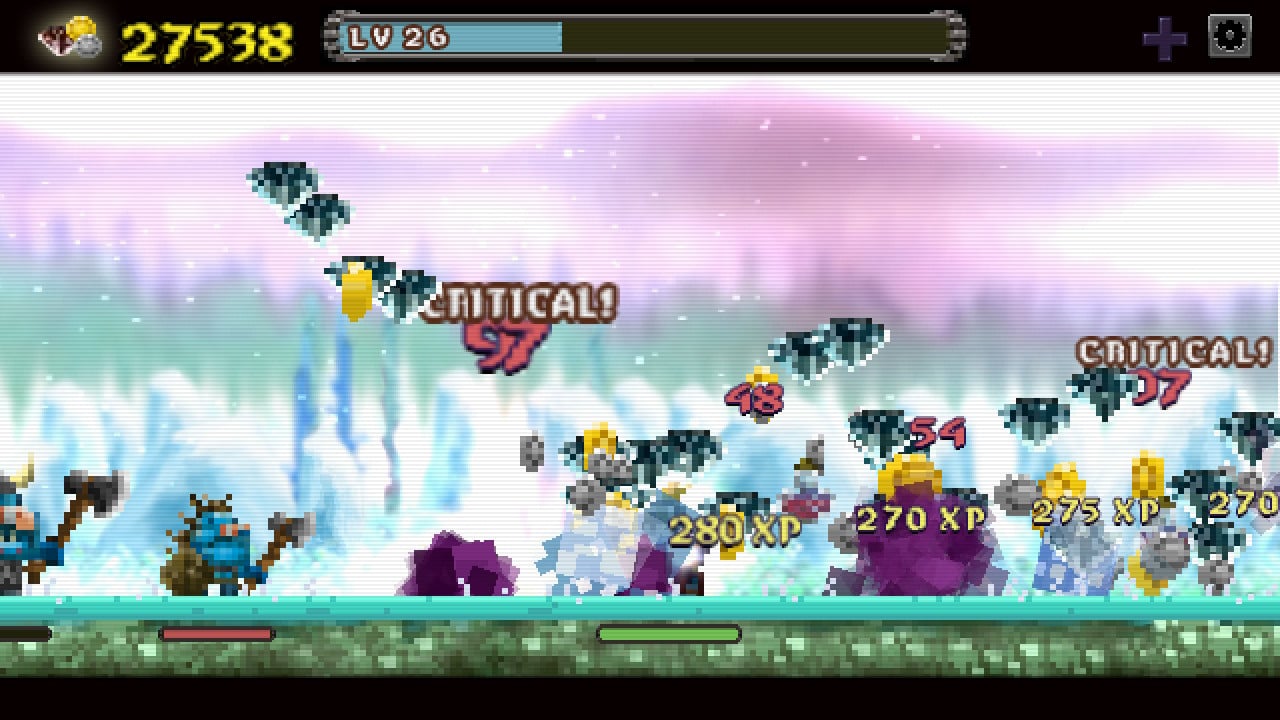 ​
Apart from the stages, you spend a fair amount of time on the main menu, which is pretty easy to navigate. You have your stages and The Mine, but there is also is a bestiary and feats. Feats serve as achievements in-game, as well. The feats range from challenges as small as 'clear a stage' or 'purchase one of each upgrade' to ones that feel more like chores, such as defeating 10,000 enemies or reach level 100. It's a nice touch but apart from knowing you did them, they don't offer any reward or incentive, which I feel is a missed opportunity to add a little something extra, be it more loot or even some cosmetics, to a basic game. The bestiary is somewhat of a joke in all honesty. It is divided by stage and displays the name, sprite, and number defeated across two pages. The part that I found a joke was that you have it filled within the first playthrough and it makes it feel unnecessary. But it serves its purpose, as unnecessary as it feels, so it works. There are a couple of small bugs as well. One is a menu bug I hadn't even noticed until maybe three hours in. Once you clear the first stage, it will say "Goblin" just above the stage preview. This is where the enemy names are displayed on the bestiary and will continue to display the name of whatever you close it on. It's so small I had missed it for a while but once I did see it, I couldn't stop noticing it. The second is when your speed reaches a certain point, you can run past bosses and run off screen. There doesn't seem to be an end, as I ran for five minutes beyond the edge of the screen and it took me the same amount of time to run all the way back to the boss. Neither are terrible nor game breaking, but they do remove a bit of the polish Loot Hero DX otherwise has.

On the topic of polish, I found the sprite and pixel work in Loot Hero DX to be pretty good. When not zooming through stages thanks to godlike speed, you can see the smaller details. The Ruins, Land of the Minotaur, features crumbling and moss covered pillars in the foreground and background, or the Bamboo Forest, dense with infinitely tall and swaying bamboo. The player looks like the typical knight, with a shield, helmet, and lance. As you upgrade your Attack and Defense stats, your lance and shield changes into a drill and a larger or spiked variant, respectively. Each map features its own enemy designs such as zombies, rat and bird men and werewolves. There are mounted and larger variants as well. They look good and are easy to identify what they are, with reactions to when you crash into them. I think a nice touch would have had them attack once you get into a range, as they just stand there and take the hits. Though over time they get lost in a blur of loot, damage and your speed as you fly into them. The music is okay, with a few tracks that really stand out above the rest. But, like most things here, it is lost in the repetitive nature of the game. You stop listening to, or at least noticing, it as you grind through. 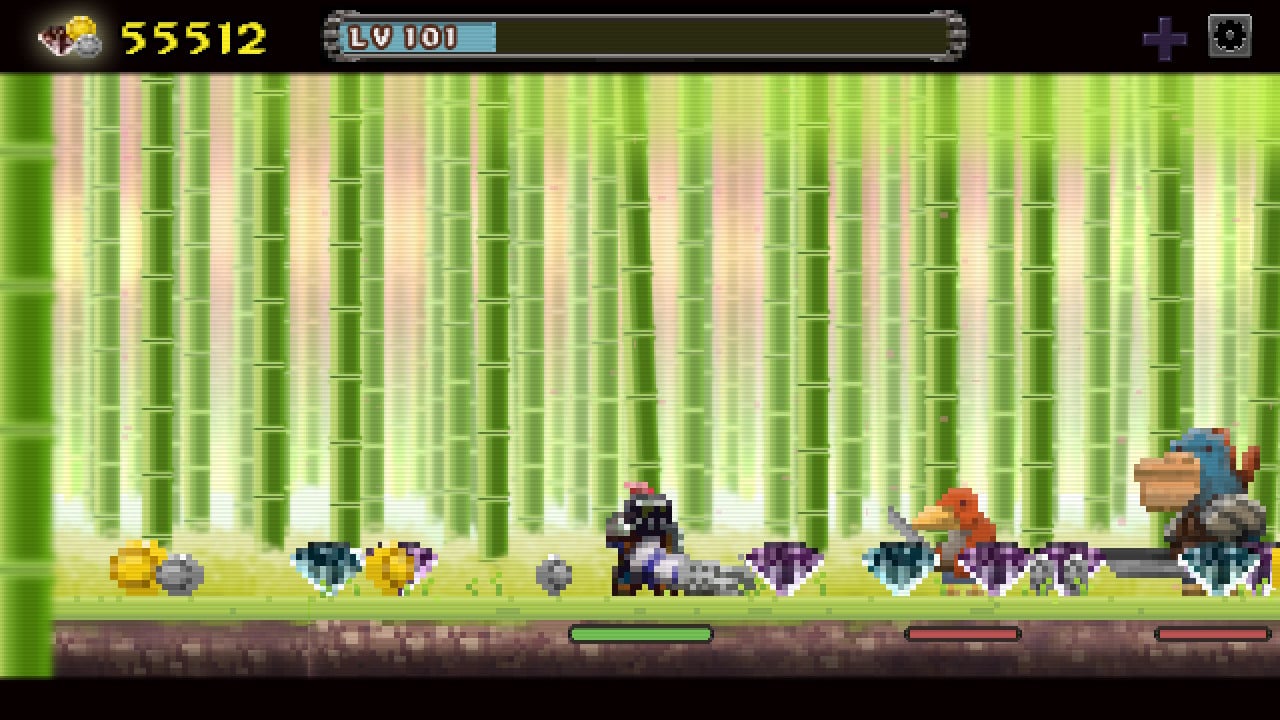 ​
It's Hard to "Slay"
It only takes 20-25 minutes, give or take, to slay the dragon and get your first victory in Loot Hero DX. It took me the better part of five to six hours to reach level 100 and complete all the feats. I played a few more cycles but sadly there isn't much else this game has to offer, and I can't really recommend picking it up. It's a simple, budget priced indie and it works, so if it caught your interest, check it out. If you run past Loot Hero DX, don't worry if you keep on running.
Verdict
Scott_pilgrim and AmandaRose like this.
Like this review