Tiny and slim, is the G915 TKL the perfect size, or did Logitech shave off just a bit too much?

Surprisingly, yes, there still were keyboard styles out there that GBAtemp hasn't covered yet. This time around, our odyssey in typing devices delivers to us the Logitech G915, in all its low-profile glory. Previously, Logitech released the standard G915, with a number pad, but this revision sees the extraneous keys cut in favor of a smaller form factor. Are slim keyboard switches here to stay? If they are, then it might be purely down to how good the G915 is.

The TKL flavor of the G915 is striking, in either its white or black color scheme. I'd even say it looks better than its larger counterpart, as the smaller size looks sharper and cleaner on a desk. It looks more spaceship-futuristic than hardcore-gamer in terms of aesthetic, especially with the clean, easy to read font on the keycaps; it's subtle, but elegant and stands out. The brushed aluminum top plate is shiny and eye-catching, without being glossy enough to catch fingerprints. As far as appearances go, Logitech has done quite well with the G915 TKL.

So, it looks cool, but not obnoxiously so, but how does it perform? Just like their line of gaming mice, the G915 uses Logitech's Lightspeed technology to connect to a dongle in order to be used wirelessly with pretty much no discernable lag. Lightspeed itself is impressive as always, but if you want to connect the keyboard to other devices, you can easily do so, either by USB or Bluetooth. The small size of the G915, combined with the range and speed of the wireless connection make this a a near-perfect keyboard for media centers or for PCs that are connected to large screens, far away from where you're sitting. It's both comfortable and easy to sync up, and light enough to keep on your lap/lap desk without noticing the weight of it. 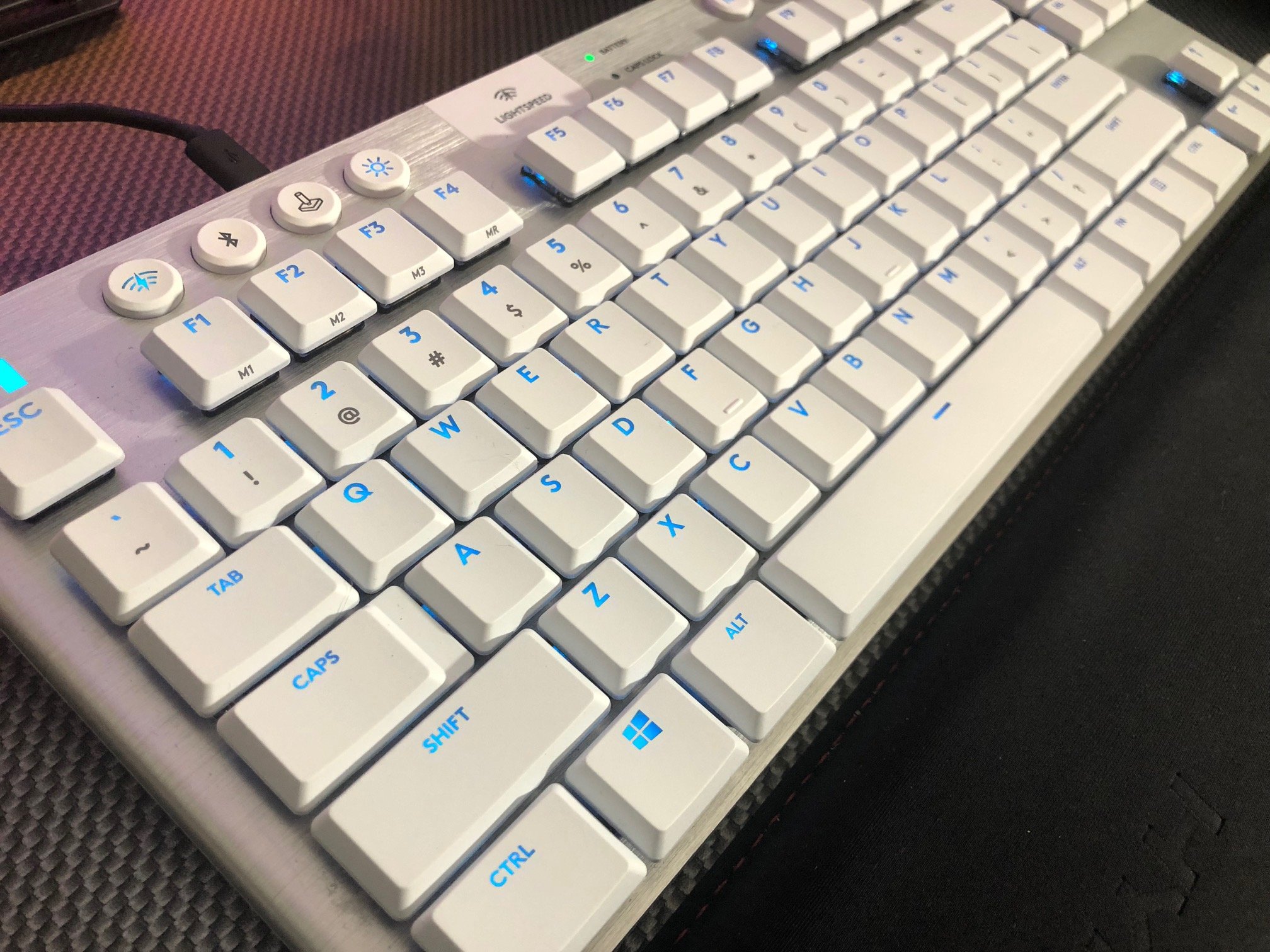 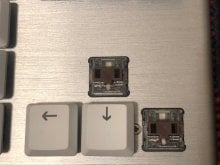 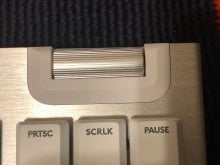 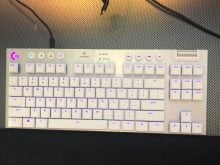 The biggest selling feature however, is easily the low-profile keyswitches. Where traditional switches will usually actuate at somewhere around 2mm or more, the unique GL switches in the G915 actuate at 1.5mm, enough to make a drastic difference in both how you type and how you play games. Imagine if an Apple wireless keyboard and a regular gaming keyboard had a baby; that's pretty much exactly what the GL switches feel like to press. Logitech offers the keyboard in all three of the major colors: Brown, Red, and Blue, or in Logitech's own terminology, GL Tactile, Linear, and Clicky. This kind of low-profile switch is almost distractingly different to type on at first, and it'll almost certainly require a bit of adjusting until you feel comfortable using it. But once you do, you might never want to switch back.

As the GL switches require less force and have a shorter travel distance, you'll be able to hit keys much faster than you would be able to on any other kind of keyboard. Muscle memory led me to hitting the keys with far too much force initially, but after getting used to it, it was far less taxing on my wrists and more comfortable overall to play games with the G915. You learn to make more precise, faster movements, thanks to the super-quick actuation of the switches. Any games that require repeated presses of keys in a short amount of time will benefit from being played on this keyboard.

In addition, the shorter height of the keyboard means your wrists won't be at as steep of an angle when you're typing. This is especially important to those who don't have wrist-rests, though you really should have one regardless if you spend extended periods of time at your computer. Again, it will take a little time to fully appreciate the low-profile nature of the G915, but once you do, it almost feels worth it. If you're far down the keyboard rabbit hole, it is worth mentioning that even when using the GL tactile switches--since there's way less travel distance between the key and the board--they'll never have the same typerwriter-like feedback of regular mechanical switches. Should that be something you specifically value about mech keyboards, you may never enjoy how typing feels on the G915. 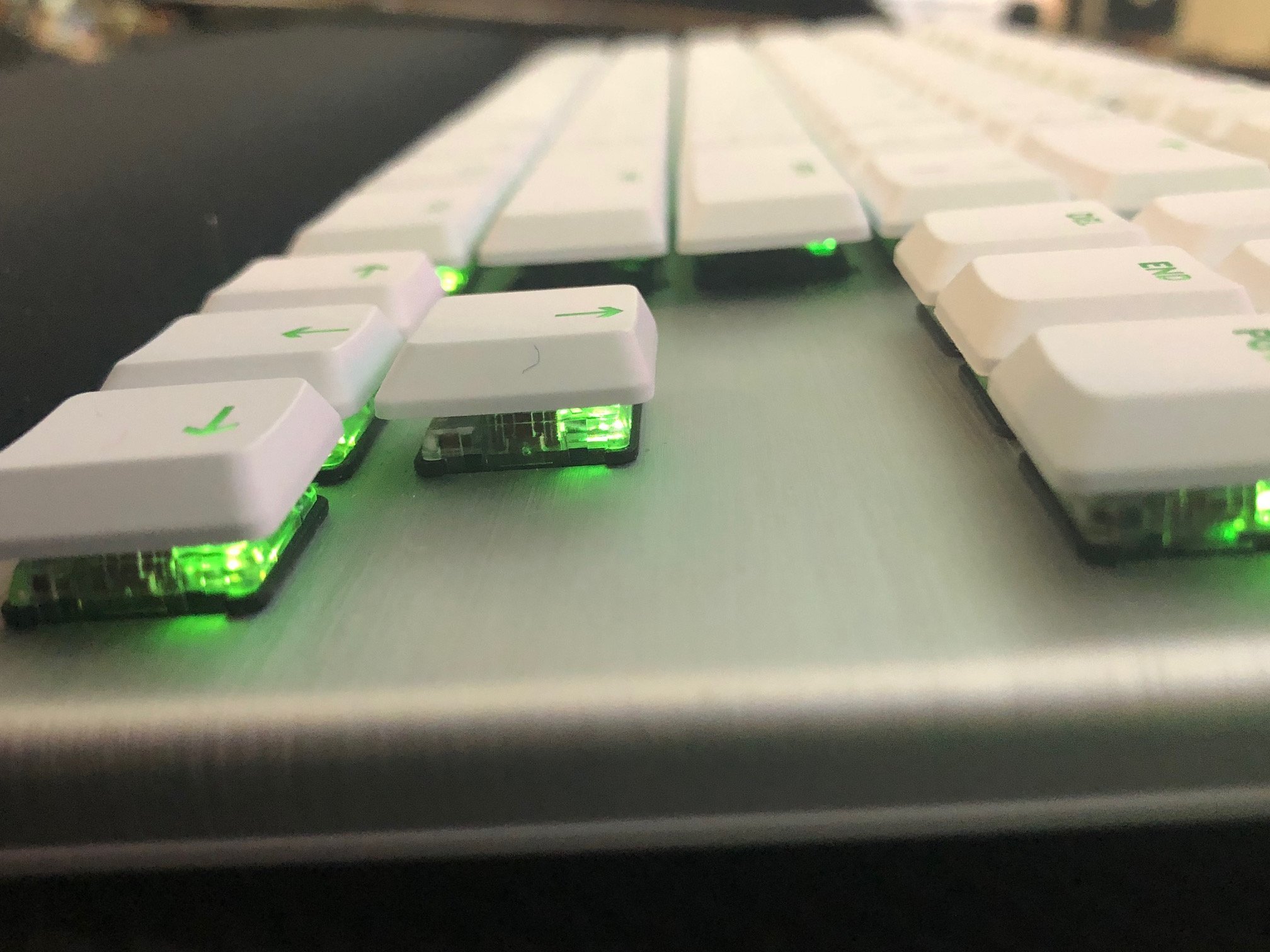 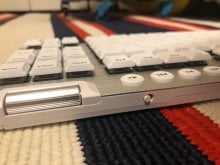 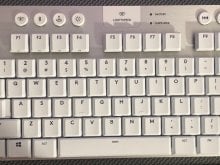 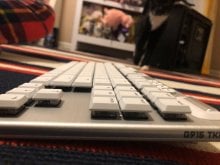 Disappointingly, the keycaps are not as high quality as the rest of the keyboard. They're great at letting the RGBs flow, but outside of that, they're almost irredeemably bad. First of all, they're matte, which means the keycaps will look great for all of ten seconds, until you so much as tap the enter key. This is a problem especially prevalent with the white keycaps; they're both going to be a little slick thanks to finger oils after a while, but a single molecule of Cheeto dust or dirt will stain the keycaps and pretty much stay there, forever visible. Add to the fact that the keycaps feel on the cheap side, with their overly-thin plastic, and it doesn't feel indicative of a product that costs over $200. Since these are low-profile keycaps, you can't really go out of your way to replace them easily, either, so you're stuck with the ones the keyboard comes with, at least until low-profile caps become mainstream.

The Logitech G915 is a fantastic keyboard, but it's also one that you'll need to take two important considerations into account: do you prefer or would you enjoy being able to press keys with lesser force and travel, and is the $229.99 price tag something you'd want to pay for a nice keyboard. If you said yes to both, then congratulations, you'll love the G915. For those that might not want to shell out that much money, there aren't too many competitors out there offering something comparable, so you might be best off waiting for a sale or price drop.