Logitech's G903 wireless mouse has just received a refresh. bringing with it a new sensor, lowered latency, and a cutting-edge wireless charging mousepad. Thanks to careful engineering, this might just be the best wireless mouse on the market.

When it comes to brand names for PC and gaming hardware, Logitech is definitely up there, having established a long and varied history of manufacturing tons of different accessories, ranging from headphones, to keyboards, and most especially, mice. Earlier this year, Logitech announced that they would be updating their older line of gaming mice with their HERO sensor, which would mean better accuracy and longer battery life. Today, we'll be looking at that newly released Logitech G903 gaming mouse, which originally made its way to store shelves in 2016 as the G900 to widespread acclaim, shortly followed up by the slightly improved G903 a year later. There's no doubt that many love the G903, but with these new additions, has an already good mouse become even greater?

Arriving in a sleek box, the Logitech G903 mouse comes packaged with a few interesting bits and pieces. You, of course, get the mouse itself, plus two extra side buttons, a small weight, a wireless receiver, and a charging cable. By default, the side buttons are already present on the left side of the mouse, as is standard, but with the G903, you can swap the placement over to the right side, as the mouse has modular buttons for those that use their left hands. I'm not ambidextrous in the slightest, nor can I ever imagine holding a mouse in my left hand, but this is a great option for those that can make use of it. Everything else is typical and pretty much speaks for itself; the wireless receiver is a tiny USB dongle, the cord is micro USB, and the weight clocks in at 10 grams. 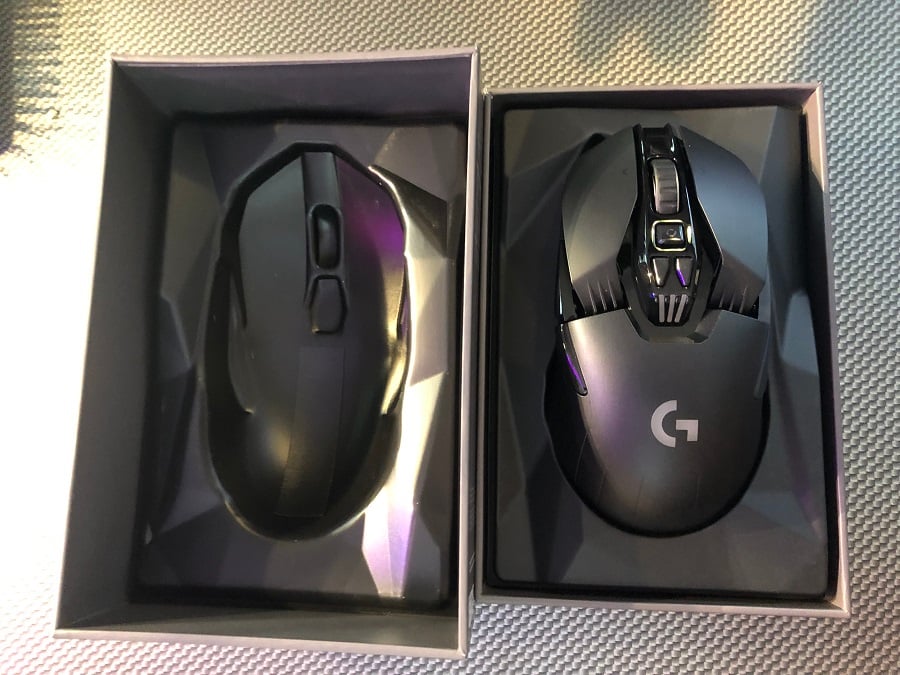 Logitech already did a great job the first time around, in terms of design. The G903 remains unchanged in terms of appearance, and still rocks that sharp, futuristic look. Since this is a gaming mouse, everyone's favorite--RGB--is in full view through a G symbol, representing Logitech's Gaming division, as well as three slits just below the scroll wheel, which light up to show your current battery level. If, for whatever reason, you hate fun and lights, you can turn both sources of RGBs completely off. Alternatively, if you own other Logitech G products, you can sync up their lights through the G HUB software, so that all your hardware is blinking together in harmony.

Upon first glance at the G903, I was curious as to whether or not the mouse would be comfortable. The left and right buttons flare out at the top, and come down to tuck underneath the back of the mouse. It makes for a very stylish look, but the edges looked uncomfortably sharp. Luckily, its appearance does not affect the ergonomics, as the G903 feels great to use; I found a claw grip to be the most comfortable way to hold the mouse, almost pinching the center with my ring finger and thumb, as my pointer and middle finger laid across the top buttons.

Nestled underneath the mouse is a key component: the interchangeable discs. You have the choice between taking the 10g weight and inserting it into the slot, or putting in a "Powerplay" compatible disc, which allows the mouse to be charged wirelessly. It's a shame that these two occupy the same space, and that you have to choose between the extra weight or one of the G903's biggest features. At 110g, this mouse is the perfect weight for my preferences, so the choice to use wireless charging was an easy one. Once you place the G903 atop the Powerplay Mousepad, you won't ever have to plug your mouse in, or worry about scrounging up some AA batteries. The mousepad even doubles as a wireless receiver, so you can just sync the mouse to its mousepad, and not even need the dongle. It's a seamless setup, and it removes one of the biggest issues that wireless mice face. 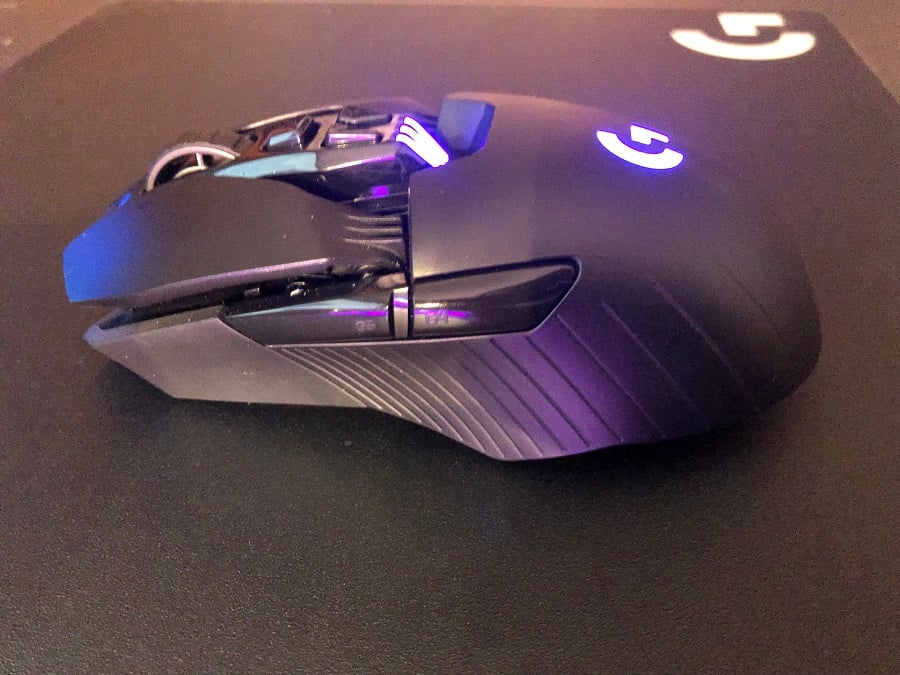 Another thing that tends to plague wireless peripherals is latency. When comparing wired and wireless mice, a majority of the time, you're going to notice a slight bit of input lag. Even the slightest delay can become an annoyance, regardless if you're trying to make a precise headshot in a game, or just wanting to move your cursor around your desktop. That's why it's so impressive that Logitech has managed to make the G903 near indistinguishable from using a wired mouse. You are given the ability to use the mouse wired, thanks to the micro USB port in the front, but when in wireless mode, the mouse is still incredibly responsive. After having used wired gaming mice for years, I noticed no major differences in latency while playing first-person games like Minecraft, Dying Light, or Borderlands 2. Everything about this mouse is steller; gliding across surfaces feels lovely, and coupled with the high polling rate of 1000 Hz and DPI that can range from 100 all the way up to 16,000, all your mouse movements will look as smooth as silk.

This responsiveness and ridiculous DPI range are thanks to Logitech having outfitted the G903 with their HERO--High Efficiency Rating Optical--sensors. With the HERO, the new versions of Logitech's G903, G703, and G502 all have some of the best battery life and accuracy when it comes to wireless mice. Before, the previous edition of the G903 could last for about 30 hours on a single charge, but now, the G903 can max out at a whopping 180 hours. Even if you want to keep the RGBs on, you'll still get around 140 hours of usage before needing to plug it in. It's an amazing achievement, and really shows that the G903 is in the top of its class.

But, as great as the battery life in this mouse is, the G903 is at its best when paired with the previously mentioned Powerplay mousepad. Sold as a separate purchase, Logitech's technology lets you simply use the mouse and mousepad together, while never having to worry about battery life again. Considering that one of the biggest draws of the G903 is its impressive battery, it's just a tad amusing to see it rendered completely irrelevant by the mousepad. Purchasing the Powerplay will give you the base charging station, and two coverings, soft and hardbacked, to use as mousepads. It's not recommended, but if you have a favorite mousepad, you can put it on top of the charging mechanism and use your mousepad with the added boon of wireless charginig, so long as it isn't made out of metal. After having used the G903 and Powerplay for a month straight, I've never run into any connectivity or wireless charging issues; this setup has been entirely flawless from start to finish. The annoyance of using a wired mouse and having to bother with its cable or the irksome need to constantly charge a wireless mouse has been replaced by joy and marveling at how fun and nice the G903 is.

I would be remiss to not touch upon G HUB, Logitech's software program for keeping your accessories under control. Having been at this for a much longer time than most other companies, Logitech actually has managed to make a software that won't make you rip your hair out over trying to change your settings. There's a wide variety of different options and presets to apply to the G903, such as DPI and toggling it on the fly, macros, RGBs, and sensitivity. All of the buttons can be customized and set to different functions, which will delight any who make use of shortcuts. 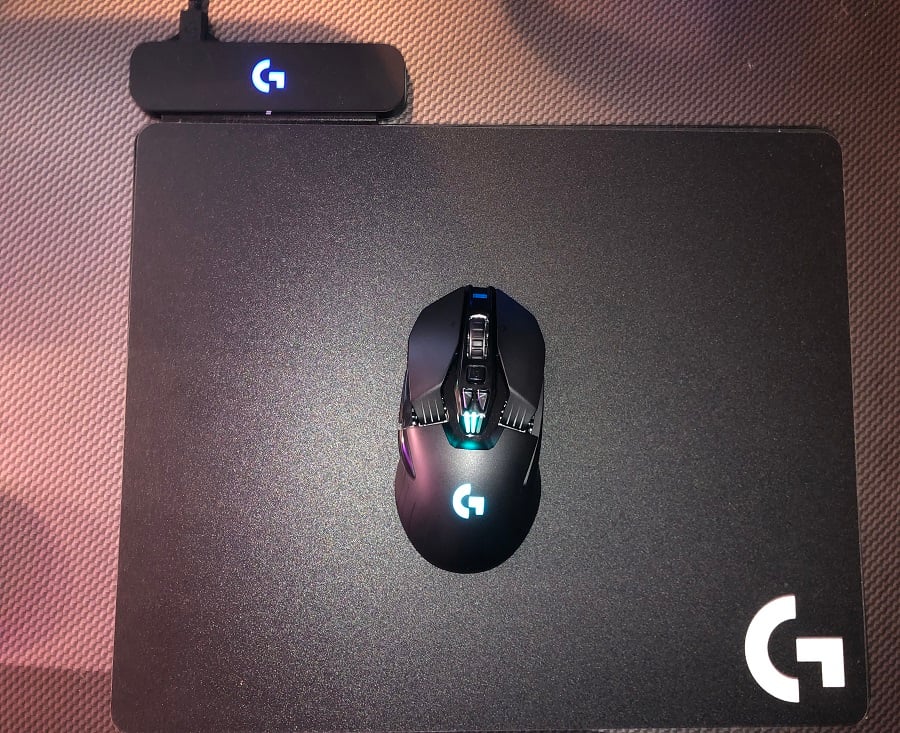 Now, if you're interested in how much this mouse will set you back, financially, the G903 comes in at a stunning $149.99. Whether or not that cost is warranted is up to you, but when compared against similar competing wireless gaming mice, Logitech's offering has the better performance all around, so you'll have to pay a premium for that technology. Add to the fact that the Powerplay mousepad is another $99.99 on top of the cost of the mouse, and you might find that despite the novelty and ease of never having to charge your wireless mouse, that the price is on the daunting side. Logitech even offers some fantastic wired gaming mice at far below that price point, which might turn out more appealing to certain types of gamers. Personally, I've come to absolutely love using this combo; I get the freedom of a wireless mouse, with the latency of a wired mouse, all while never having to bother with constantly plugging it in. The price is hard to swallow, but in return, you get absolute luxury. 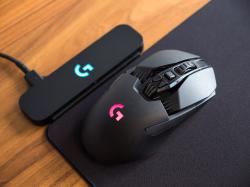