In the world of gaming headsets, there are hundreds of options to choose from. Logitech's latest creation isn't your average everyday headset, though; this is a product "for pros".

Audio, and by extension, headphones, are a large part of your gaming experience, whether you're blasting that catchy battle theme, or listening closely for what direction your enemy's footsteps are coming from. Communication is another important factor, for when you want to casually chat with your friends while gaming, or need to tell your teammates something important. This is especially true when it comes to "pro" gamers and e-sports competitors, who tend to use the best gaming equipment out there. That's why Logitech has just launched a new headset, marketed towards the professional gaming crowd: the Logitech G Pro X Headset.

The newly-announced Pro X is a collaboration effort between Logitech and Blue Microphones, with the latter being the reputable creator of the popular Yeti and Snowball microphones. Logitech recently acquired Blue, making this headset the first product to result from the two companies working together. Logitech has been known to be a reliable hardware manufacturer, whether it be mice, keyboards, and especially headsets, but in a world where you have dozens upon dozens of options when it comes to headsets, you're going to want an amazing one. Does Logitech manage that, or do they need to go back to the drawing--er, sound board?

For myself personally, headset microphones tend to be an embarrassment; they'll either pick up on every noise I make as I breathe, or I'll sound as if I'm trying to talk in a room that's simultaneously underwater and in a wind tunnel. I can't count the number of times that I've randomly cut out, had people audibly cringe at my low-quality audio, or told me that they could hear my air conditioning roaring in the background, through my headset microphone. Add that to the fact that for whatever reason, gaming headsets tend to be ridiculously bulky, and either far too wide, or far too heavy to be even remotely comfortable. That's why I eventually gave up on using a headset, and moved onto using a Yeti + normal pair of headphones. This was part of the reason why I was a little dubious at first, when the Logitech G Pro X headset happened to wind up on my doorstep. 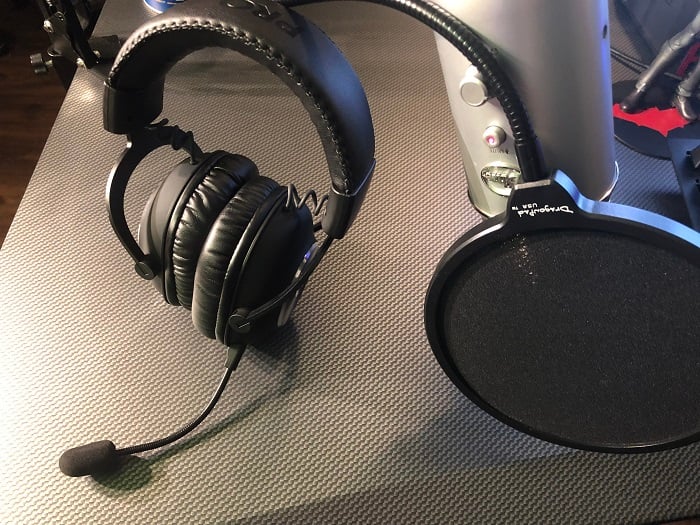 On the front of the box, you've got a nice, minimalistic design, with Logitech's symbol at the bottom and the words "Pro X" subtly going up the side. Immediately, the "Blue Vo!ce" logo got my attention, and I was instantly curious as to how the microphone would sound on the Pro X. That's the real standout of the package, as the specs for the rest of the headset seem to be fairly standard; the headphones use a 50mm driver, they have a range of 20Hz to 20kHz, and there's support for DTS 2.0 surround sound.

You get quite a few accessories to go with the headset, including replacement earcups made from a softer cloth material. a USB sound card, a splitter cable, two different lengths of aux cables, and the detachable mic, all packed within a soft carrying bag. It's a lovely addition to have two different lengths of cord, one with a longer range, meant for console use, and a shorter one that's meant to plug into your PC. The extra earcups are an especially nice touch, as you can swap them out, depending on your preference for faux-leather or velour cloth.

Pulling the G Pro X out of the box reveals that the headset is relatively understated, in terms of appearance. There's not much flair or excessive branding; just a nice, simple black pair of headphones, with a touch of silver on the outside of the earcups. A coiled cord can be seen hanging down from both sides of the headband, which, when coupled with the large earcups and thick, padded headband, serve to remind me of those retro old-school studio headphones. The Pro X isn't trying too hard to impress or stand out, but still has its own stylized look without having to resort to the industry-typical in-your-face "gamer" look.

Between the two earcups, there are a few minor differences apart from just how they feel when you're wearing them. The velour ones are softer and rest a bit lighter on my ears, but to compensate, they don't trap in as much of the sound as the faux-leather ones do. It's nice to have a choice between the two, and to have a backup pair of earcups, since they're usually the first thing to wear out on a pair of headphones, though, you're likely best off using the default leatherette, as the surround sound seems to come through a bit better when there's more of a seal between the headset and your ears. 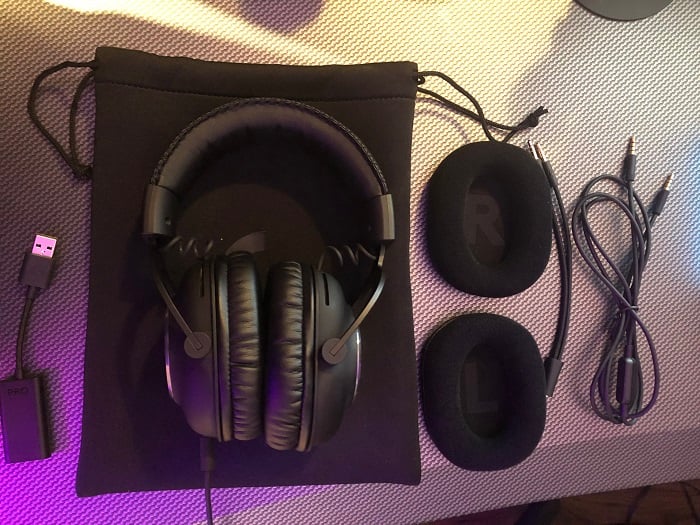 As someone who tends to be picky, when it comes to headphone comfort, I was pleased to find that the Pro X rest very comfortably on my head. At 320g, they feel a little hefty when in your hands, but once you're wearing them, the memory foam earcups and headband provide a very cushioned experience. Solid stitchwork can be seen across the top edges of the headband, which traces down to the rigid aluminum framework and matte plastic finish of the outer earcups. The Pro X is strong and durable enough to take some wear and tear, but plush and soft enough to be a delight to wear for hours on end.

A lot of headphone makers seem to believe in the concept of cranking up the default bass level and claiming that their product is perfect for gaming. Fortunately, that's not the case, here. Rather than having a bass-heavy sound, the Pro X is more balanced, managing to output clear and crisp audio, while still having the capabilities to give a good bass-y sound when you need it. Just as any good pair of headphones should, the Pro X excelled when I tasked it with playing a playlist of different songs, all from various genres of video game soundtracks. This was also my first time trying out 7.1 surround sound on a headset, and I was left impressed by how useful directional audio could be. In The Division 2, I could hear just exactly where some enemies were sneaking around, while in Dying Light, the growls of zombies echoed and bounced around, really adding to the uneasy feeling of being in a room full of deadly shuffling monsters. Firing a weapon sounded so much more satisfying when surround sound was on and in full force, and I enjoyed every immersive minute of it.

Going back to the topic of esports and pro gamers, you, too, can hear exactly what certain popular game streamers do when they play, by using their personal audio settings. The Logitech software comes with some presets from TSM Myth, London Spitfire, and G2 shox. You can also customize and save individual profiles for your entire game library, letting you have full control of your audio, to perfectly tailor each game to your preference.

By using the 3.5mm aux cables, you can connect the headset to the wide range of devices that support it. To get the most out of the G Pro X, however, you'll want to plug it in to the USB sound card (DAC), and use it on your computer. Doing so lets you use the 7.1 surround sound feature, and when paired with the Logitech G Hub software, the special Blue Vo!ce microphone editing suite as well. While some may balk at having to use external software for their hardware, G Hub is one of the most robust programs out there when it comes to tweaking your headset settings, offering tons of different presets and editing options to allow you to customize your audio down to every minute detail. 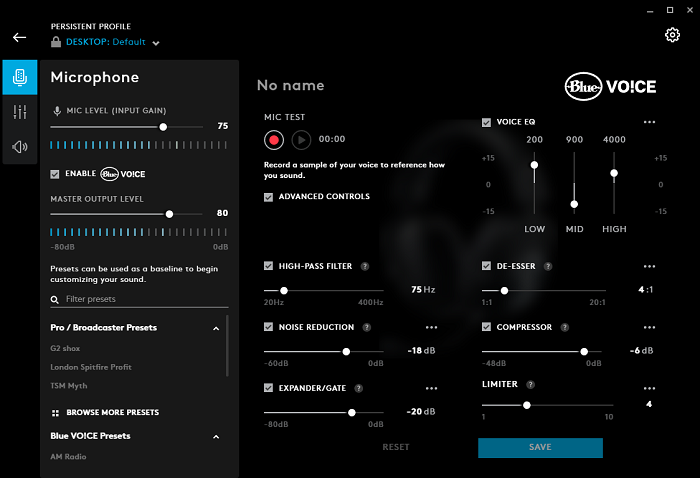 The Pro X's microphone is passable on its own, but once you click the "enable Blue Vo!ce" button, everything changes. Suddenly, the audio quality sounds much cleaner; there's less background distortion, and it's almost like you're using an entirely different microphone. Enabling the aforementioned setting also gives you the ability to change a whole host of variables, such as your EQ, high-pass filter, how much noise reduction you want, a voice compressor, limiter, and expander; for those that feel overwhelmed by all those audiophile terms, hovering over each heading gives you a little description on what exactly everything means. Logitech did a fantastic job by having all these options available to users, and making it all easy to use. There's even a setting to record your voice and have it play back to you, so that you don't have to waste time and go through the trouble of using other applications to record and listen to yourself. Logitech has also provided a handful of presets (Broadcaster, AM/FM Radio, and more) that you can switch between, to see which suits your voice best. The final bit of icing on the cake is that you don't even need to have G Hub running in the background to get these effects, once you've set them up, as you can sync your profile to the DAC and have it handle all your audio processing.

Most higher-end headsets tend to come with a large price tag--Steelseries, Audio Technica. and HyperX all have semi-comparable products, but they're just a little bit over the $149.99 mark. The Logitech G Pro X comes in at $129.99--a little bit cheaper than the competition--which is a fair price for the headset. Not only that, but the Pro X has access to the fancy Blue microphone software, which means you'll sound leagues better than other headset users when you're chatting it up online. If you have a standalone condenser microphone, this is not poised to fully replace it, but if you need an all-in-one headset that has great audio for playing games, and a high-quality microphone for being able to talk with friends and teammates, the Pro X is nothing short of impressive.