Rather than being yet another gaming mouse with holes, fancy lighting effects and weight adjustment features, the Lexip Pu94 offers features that you won’t find in any other mouse: it merges 2 joysticks within its body. Is it “yet another mouse” with a marketing gimmick or does it offer true innovation?

As far as gaming mice go, I haven’t come across truly innovative ones lately. I’ve tested wireless ones, one with a built-in fan to keep sweaty palms cool and even rather plain ones. These weren’t particularly striking, save for the Zephyr with its built-in fan, but it didn’t add much to gaming functionality. 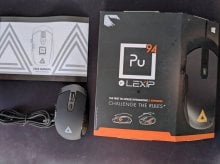 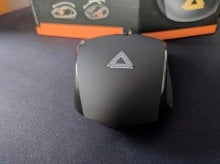 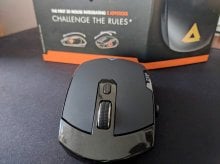 Coming from a French company, it’s concept is rather unique. It packs not one but two joysticks within its body. The first one is rather obvious, located at the thumb area. The second one is concealed within the body, which rotates 360° along the two axes of an internal pivot (forward/backward and left/right).

But it doesn’t end there with the Pu94 as each of its 6 buttons (2 side thumb buttons, 2 mouse clicks, 1 clickable scroll wheel and 1 backlit button behind the scroll wheel; each with Omron switches) are fully customisable via the Lexip Control Panel app. The latter is a must-have to unleash the full potential of this mouse. Unfortunately, the app is only officially available for Windows, so if you’re on another OS, you might need to go through additional hoops. There’s also a slight learning curve to using the software but once you get the hang of it, you’ll get to better appreciate what the Pu94 has to offer. 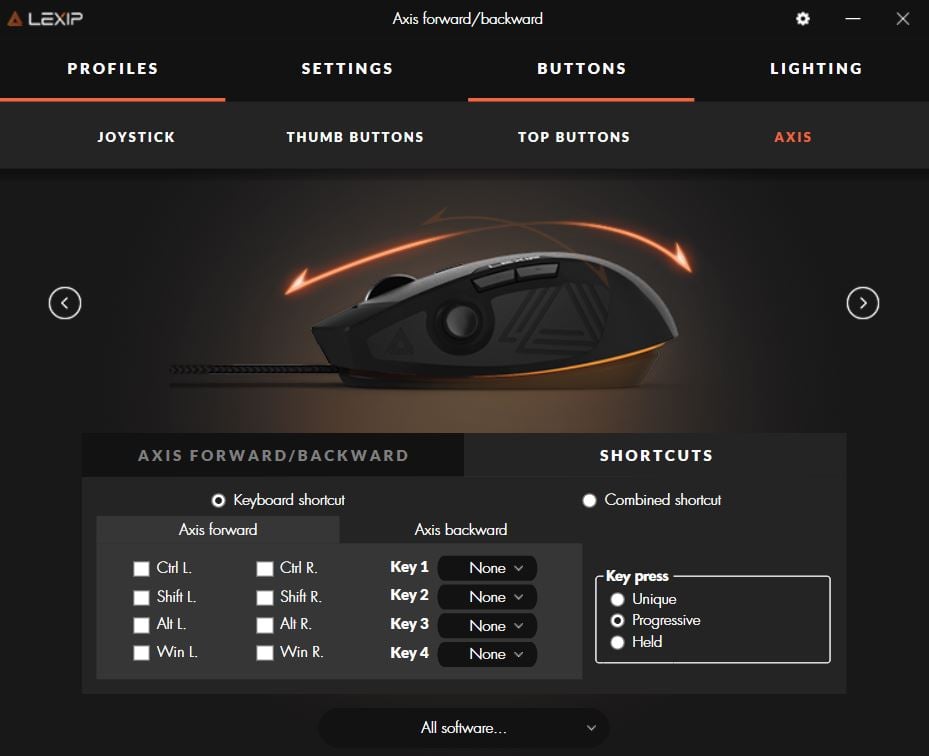 The app allows you to adjust DPI settings (the Pu94’s ADNS-9800 sensor works up to max speeds/accelerations of 150 IPS/30g and its sensitivity can be adjusted up to 12000 DPI), adjust dead zones, customise RGB lighting and effects and also create/import profiles so as to configure program-specific macros. In addition to fully remapping those six buttons with virtually any keyboard keys, the thumb joystick and the internal joystick can be remapped and their sensitivity changed.

Yes, the thumb joystick isn’t just to move characters around in-game but you can map each of the “arrows” (up/down/left/right) to a key or combination of keys. For instance, you can use it to scroll through your weapons in FPS games or place objects in building games. Using the second joystick within the shell is a no-brainer for flight simulators like Star Wars: Squadrons or even games with a hover mechanic like Disintegration’s gravcycle. And sure enough, after binding the axis and other keys, the Lexip Pu94 felt like a mini HOTAS (or flight stick). The mouse is responsive to actions and tilting the mouse to tilt in-game gives a positively satisfying feeling, bordering the surreal. I found that for racing games like Project CARS it also added a layer of fun to the gameplay. In fact, for some titles such as Ghostrunner you can play almost completely one-handed with this mouse; control the camera with the mouse as you regularly would, move with the thumb joystick and map the second joystick and other buttons for major actions. 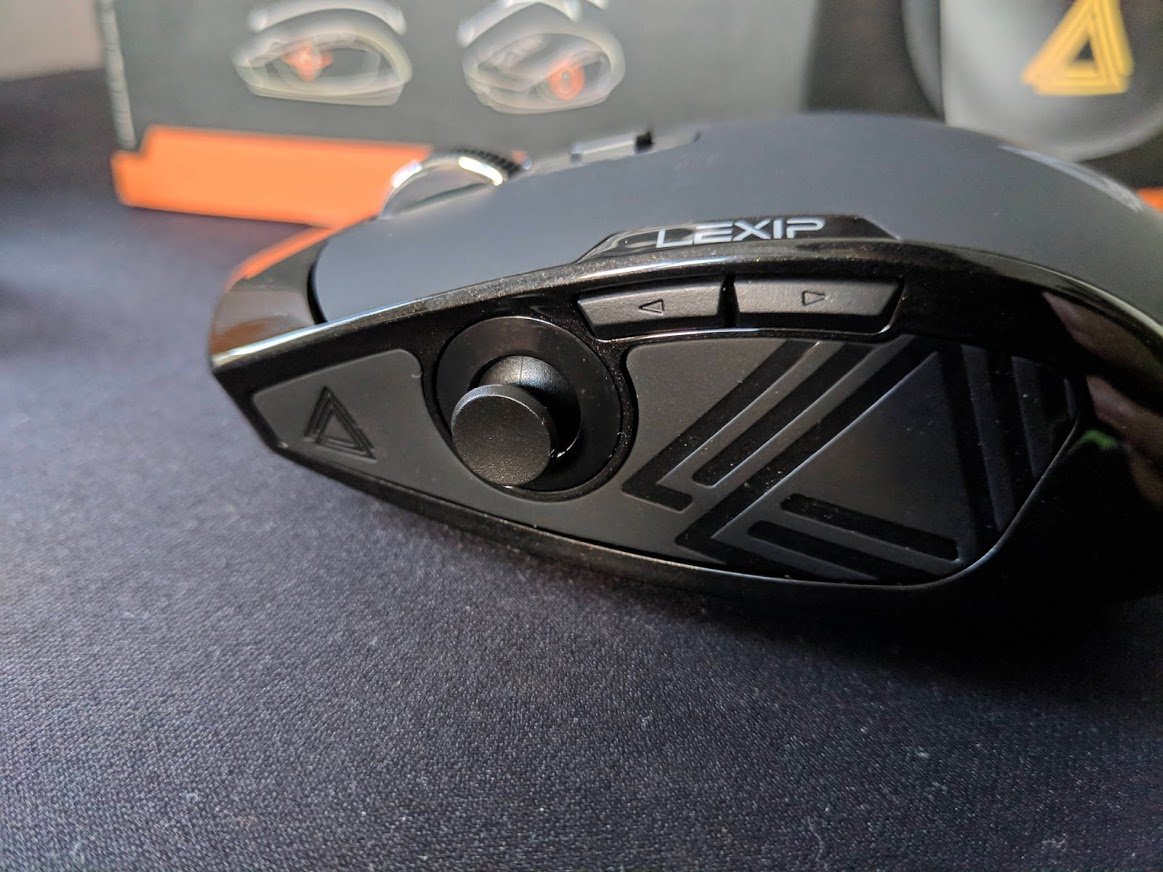 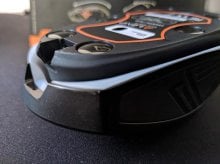 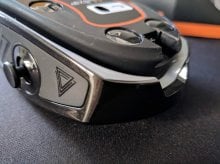 However, to get the most out of this mouse, I found that binding and creating profiles for individual games is best but this requires quite some dedication to set up. Moreover, there isn’t any on-board memory with the Pu94, meaning that you must have the companion app open whenever you play a game whose profile you’ve created. If you need to switch games, you’ll likely also have to switch profiles (unless both games use similar key bindings). Additionally, if you are swapping between laptops/PCs, you’ll need the app on both devices as well and load up the appropriate profile (or re-create it).

It might sound minor but when you’re used to some bindings within the mouse, you’ll come to expect to use it across any device you use. For example, I’ve assigned scrolling on Chrome to the forward/backward axis of the internal joystick and expected to scroll across web pages when I swapped to using the Pu94 on my Surface Pro 3 but alas, I learnt that I had to download the app and bind the keys again to use this feature again. An on-board memory with the ability to toggle between profiles on whichever device the mouse is plugged in would have been very welcome here. Even a peripheral like the Azeron Classic, which shares similar features to the Pu94 but is more DIY-y, has such a feature which really should have been a must-have in the Pu94.

Speaking of the Azeron Classic, combining it with the Lexip Pu94 seems like a winning pair with their range of keybinding options and the ergonomic aspect of those devices. Indeed, I found the Lexip Pu94 to fit nicely in my hand, with the grips around the thumb area helping me keep control over the device. The rubberised finish on the top and nice heft to the device give it a rather premium feel. 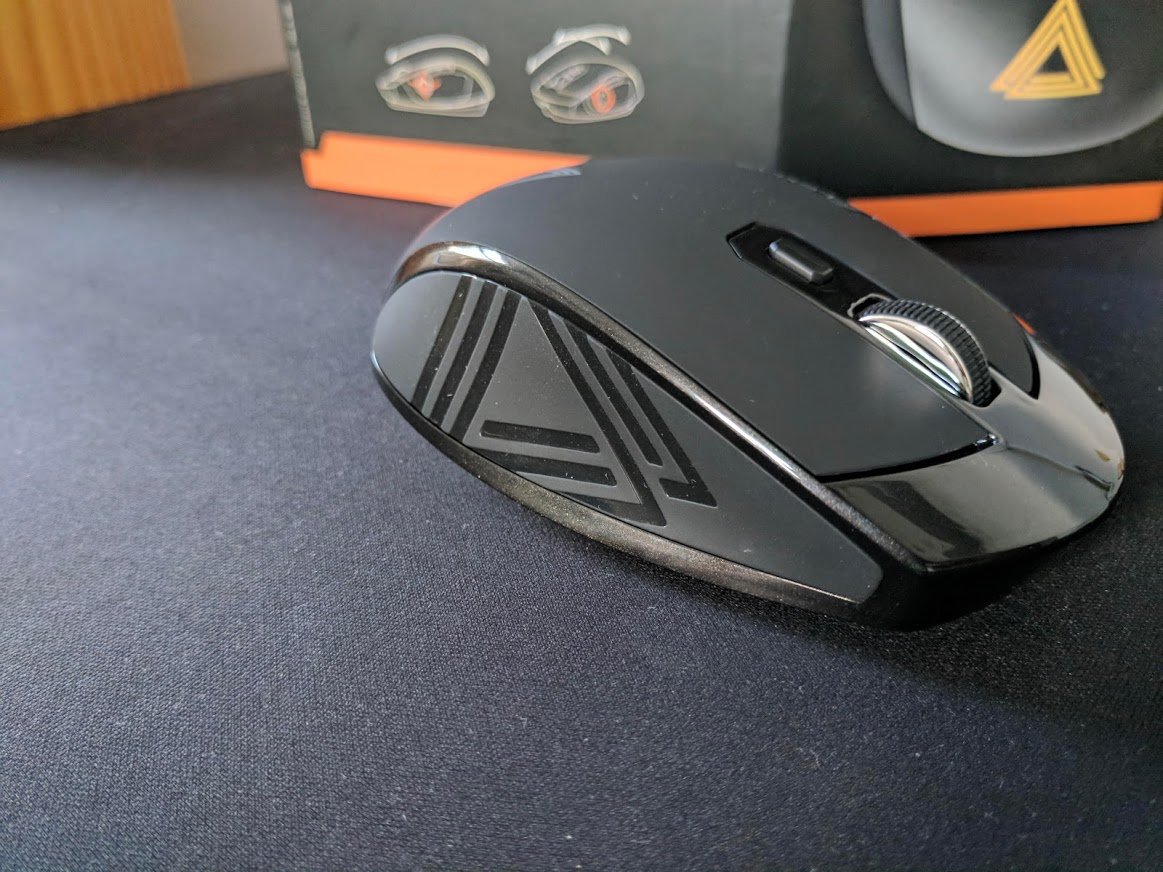 Initially, I thought that the thumb stick would get in the way of my regular use of the mouse but that was not the case. To use the thumb stick in-game, I found that I have to shift my palm’s positioning slightly; but nothing that makes the experience uncomfortable. The other two thumb buttons are also easily reachable, as is the button just under the scroll wheel. One would think the latter to adjust DPI settings, and it can indeed be mapped to perform this function, but only via the companion app. If you plug the mouse to another PC, you’ll be stuck with only one DPI setting until you download the app. This again attests to the lack of an on-board memory.

As for the second joystick, it needs some getting used to initially; at least I had to because I’m not totally used to titling my mouse. I thought I would accidentally press on the back axis all the time with the weight of my palm but this isn’t the case as this concealed joystick needs some extra effort to trigger an action. Moreover, the Lexip Control Panel allows the user to control its intensity.

I always find it ingenious how Lexip seamlessly integrated a 360° internal pivot within a mouse without making the device excessively large or heavy. I also liked that they included a detachable USB cord for easy storage or even replacement.

A personal gripe I’ve had with the look is that I wish the designers went more aggressive with the overall design as they already went all-in with the integration of 2 joysticks within the Pu94. If you cut the thumb stick out, the design is rather generic. At least, a thumb rest plate on the left side could have been included.

What I did appreciate was the subtle RGB lighting effects. These are visible on the logo, top button, and bottom shell. They aren’t so obnoxiously “gamer” and I particularly like the “warm” reflection that the lighting effect from the bottom shell produces on my mouse pad.

These RGB effects can also be adjusted via the Lexip Control Panel, allowing you to change colors, display two colors or have a rainbow effect. But, you might have guessed it, all these are only available in-app and even to switch the lights off you’ll need to have recourse to the software. Even without an on-board memory, a switch to toggle off the RGB would have been expected. 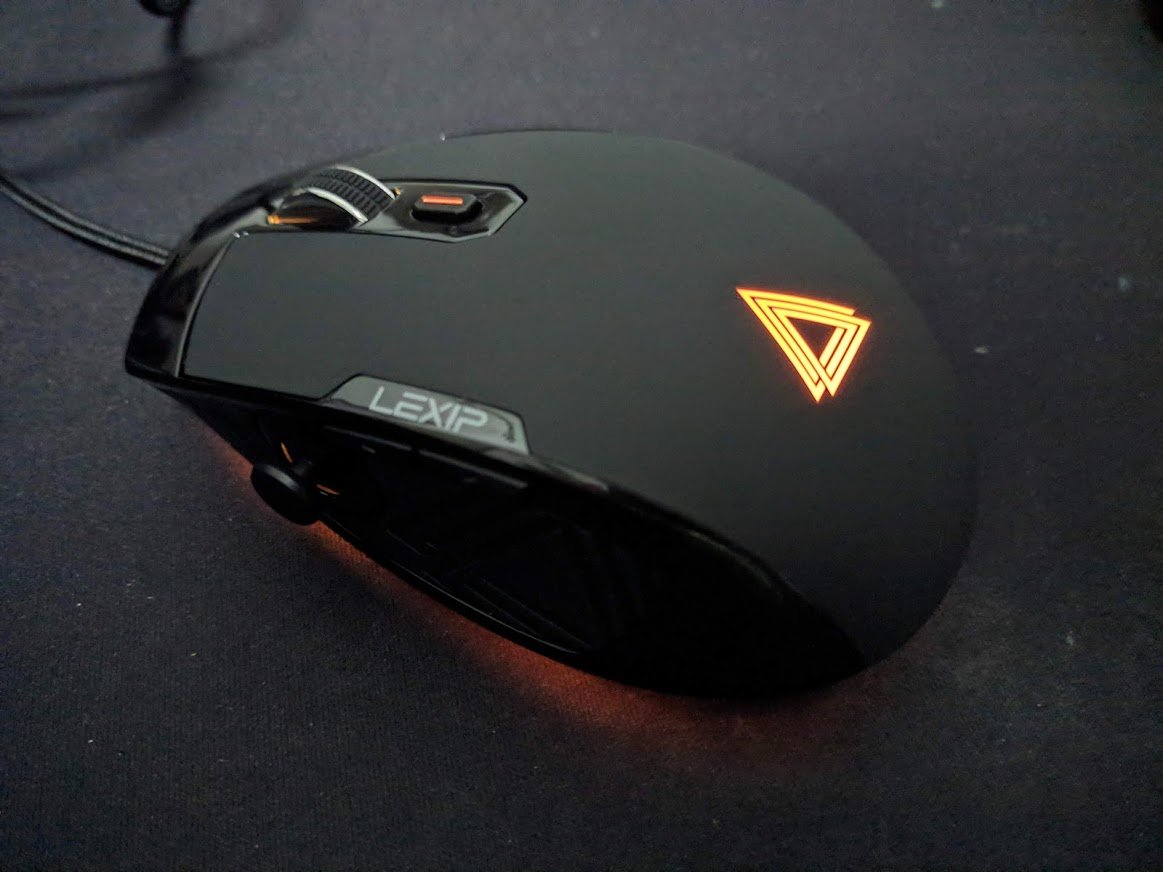 Another touted feature of the Pu94 is the “ceramic glide feet” which are 6 circular ceramic pads on the underside. They are said to help reduce friction on all surfaces and I found them to be fine for the most part, nothing really extraordinary. That said, it’s supposed to be more durable which is believable compared to rubber or plastic pads commonly used. 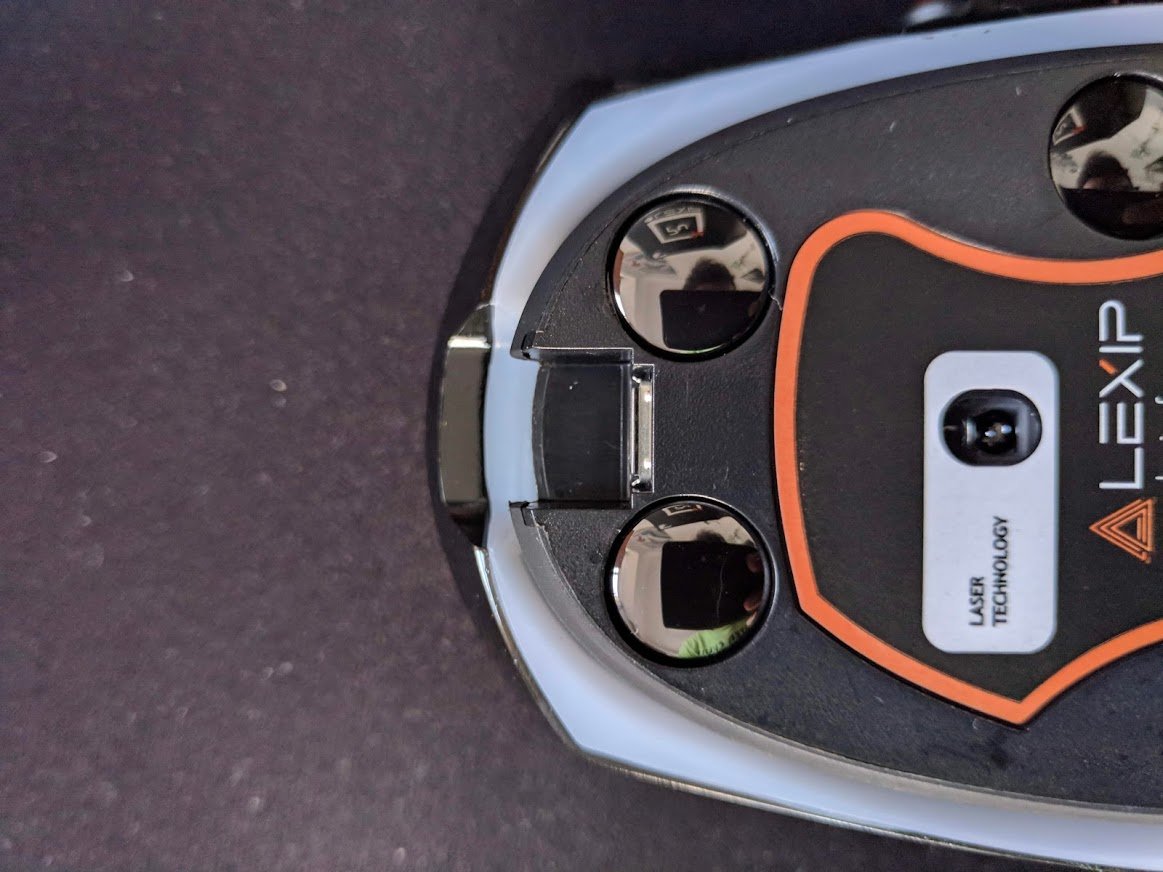 Of note, the Lexip Pu94 isn’t just made for gaming. It is also adapted to use with other softwares such as Adobe After Effects, Unity and AutoCAD, with pre-made profiles available on Lexip’s official page. One might think that only 6 keys won’t provide much additional use for a mouse but considering the two joysticks which each double as 4 keys, that’s a total of 14 keys. Additionally, all keys and joysticks can be bound to combinations of keys rather than only one. The abundance of buttons and customization options it offers allows users to offload a considerable amount of keyboard work onto the mouse. I personally prefer its remappable joysticks over a mouse with dozens of tiny keys which aren’t intuitive to use and tiny to reach. The tilt and rotate joystick pair and the easily accessible keys make for a more simplified and intuitive use.

After a successful crowdfunding campaign, the Pu94 started to ship last year. While I notice some complaints that the companion software didn’t work properly or the device itself had issues with missed inputs, I did not come across such issues with my unit. Maybe those were faulty units or a software update addressed those concerns. What I did come across is some issues mapping keys for certain games. I first came across this when playing Ghostrunner as I couldn’t map the thumb joystick to move. So what I found to work was to download a pre-configured profile for an FPS game on Lexip's official website (I used Ghost Recon Breakpoint) and it worked. I only had to remap other keys but this workaround allowed me to play the game using almost only the mouse and barely touching my keyboard. It’s not ideal and shows room for improvements but hopefully this gets fixed in a software update.

While there are some missing features and an adjustment period, I am very satisfied with what the Lexip Pu94 has to offer. I’ve used it as a daily driver and swapped to gaming with it seamlessly. For some games it was geared towards such as flight sim, it really helps elevate the gaming experience. Considering its unique features, customizability and versatility, the MSRP of $80 is well worth it.

To come back to my initial query, from my experience, the Lexip Pu94 certainly isn’t just “another gaming mouse” and it’s far from a marketing gimmick too. Its ingenious approach to integrate two joysticks in one mouse while allowing full customisation of all its keys and joysticks attest to true innovation. 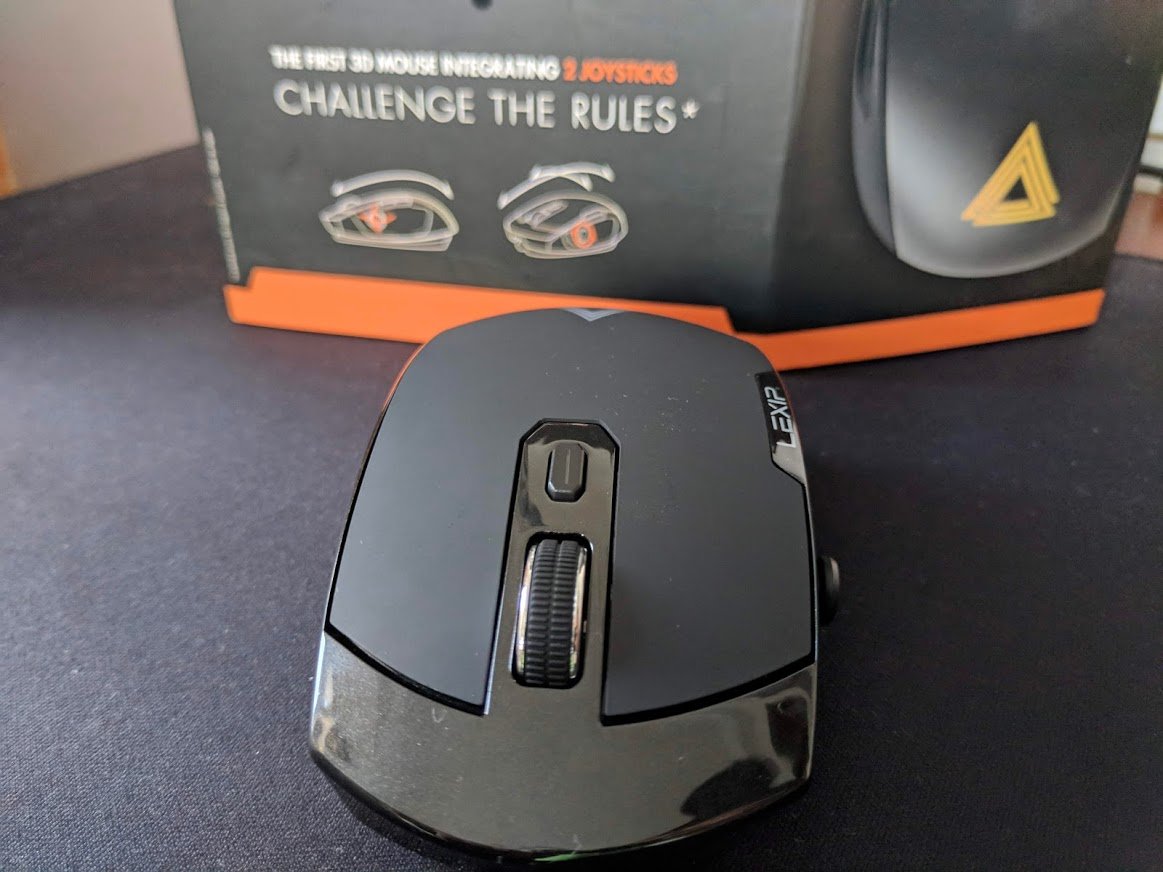 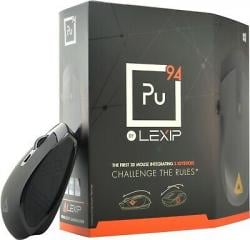