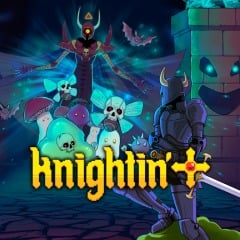 Love Zelda, love dungeons, bring it.
Some say the best bit of Zelda is the puzzle-filled dungeons. Knightin'+ agrees and ditches open worlds for pure dungeon-play!

Imagine absolutely hating the open world aspects of the Zelda series, but wanting to build a game that pays some serious homage to its dungeons and devious puzzles. Knightin'+ follows Sir Lootalot in a tongue-in-cheek romp across a variety of familiarly themed multi-story dungeons, with the aim to power yourself up and loot the living heck out of every chest you can find. Currently retailing at just £4.99 on PSN and other digital platforms, this title is extremely unassuming, with its vaguely '90s looking artwork and Shovel Knight-inspired 8/16-bit aesthetic you wonder just how deep this title could possibly be.

Set across an NES-looking overworld map, four unique dungeons lure you in with promises of loot and upgraded weaponry. They range from Abandoned Ruins, Ancient Pyramid, Deserted Temple and the Dark Tower. Each of these hold a number of upgrades, loot chests and puzzles to solve to further your adventure. The overwhelming issue here is that each of these playgrounds of peril is extremely similar in look and feel. The only major differences are the enemies within and the colour of the stonework. Sometimes I simply couldn't figure out where I was, where I had been or where to go next, thanks in part to the minuscule map at the top of the screen, but also due to the confusingly similar layout of many of the rooms and floors. That "minimap" is a complete and utter waste of space. It takes up roughly 3" diagonally on my 60" 4K display, and genuinely caused me to have to strain to see it at times, as the pixel art within it is even tinier and it really takes a lot to decipher your location and what rooms have what features. For what it's worth and to save you burning your retinas: if a room has a purple smudge it's for warp points, blue edges mean there's a save point, and a yellow muddle of pixels indicates a handy shop. "The more you know!" 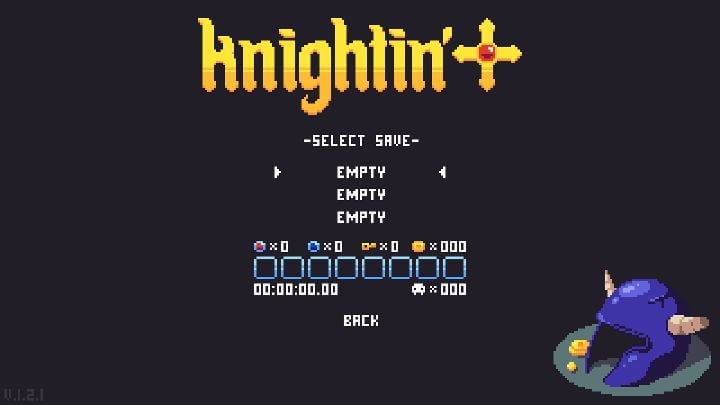 Apart from the obvious lock-ins to escape and figure-out-the-teleporter-pattern conundrums, Knightin'+ only really contains two main types of puzzle: one where you illuminate switches on the floor, and one where you slide rocks around to unlock your loot. The former scatters cunning little clues left carved into the level's flooring, offering shimmering indications of which switches needs activating and in which constellation. The devious slide puzzles, known as Sokoban, see you pushing a rock onto a glowing chevron, and once all are in place you unlock a chest or a route to a new area in the dungeon. However, these puzzles are infuriatingly simple to look at and incredibly taxing to tackle. One of these actually caused me such great agony that I chose to turn the console off and come back to it later. Ironically, when I returned, refreshed and reinvigorated, it simply opened a chest with some gold in rather than help me solve the rest of the labyrinth or gain some incredible new item or power. Items include a ghost amulet to reduce immediate hit damage, a shield, a shield upgrade that allows you to reflect projectiles, and upgradeable magic meter and health bar.

Movement and combat within the environment are exceptionally straightforward, only needing the stick to navigate, square to slash, circle to fire magic, and X to open doors. After a few levels, you stumble upon upgrades for your gear to incorporate things like a charged up sword attack, a charging running slash, and eventually, a flame trail for that running slash that deals more damage should an enemy stray into it. Though the combat is functional, it often feels like your sword is a tiny dagger, with no reach or radius of attack. You often have to get so close to an enemy to swipe at them that you get hit from another direction by a different hazard or foe while focussing on bluntly stoving in the skull of the one at hand. The variety of enemies is a little stunted too, with some that offer little to no challenge and others that have unique abilities and traits that are actually genius. One Ribena berry-looking enemy, for example, walks around as bold as brass, ignorant of your mission, replicating itself repeatedly. This may not seem amazing, but add into the mix several four-way neon green laser beams that block your path and frazzle you, spinning flailing circular saw discs, pitch darkness (where you need to illuminate several lamps with the magic wand before the first one you lit goes out), and homing enemies with longer swords than yourself, and you have got yourself an infestation of the bulbous purple guys. I honestly couldn't fend off the 30 or so that spawned on my screen and I quickly got overwhelmed and completely destroyed by their nonchalant marching. Honestly, it was a crazy situation that I had never witnessed in a game like this before, it was pure adrenaline trying to clobber them all to smithereens, which was actually a slowly-building moment of frantic, smothering fun. 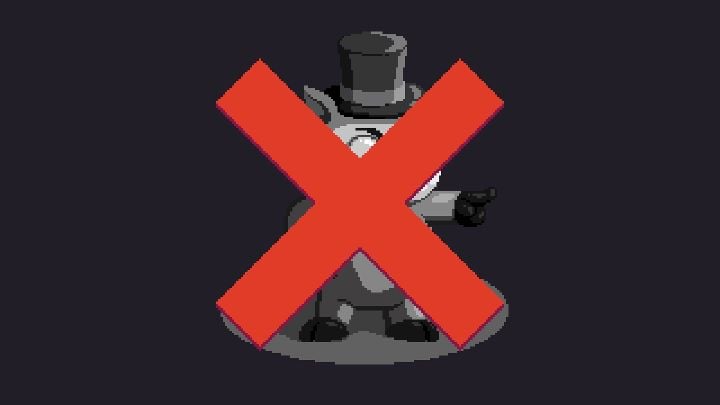 Defeating the bosses is challenging, but once you have learned the patterns and spots on screen where they cannot touch you, it's a relatively simple affair to go through the motions and hit them several times in the same pre-discovered fashion. The boss battles seem a little unfair at first, with the bosses hammering you to oblivion with barely any effort on their behalf, but they're cleverly formulated to fill the screen and attack broadly across the entire space, forcing you to think on your feet and use everything at your disposal to solve the rhythm and thwart them. The bosses include a range of adversaries, each with a unique theme, but they're all glaringly familiar. The first boss, "Qaug - Almost a dragon," reminded me of the Chuchu Slimes in Zelda or Wart from Super Mario Bros. 2. The second boss, "Gosura - The Unfinished Titan," seems to be a throwback to Mario 64's Eyerok or Super Mario Odyssey's Knucklotec. The third boss, "Merwin - The Master of Mucus," is like a steampunk version of the pigs from Angry Birds if they were a bullet hell boss. The fourth and final is "Eelick - The Generic Dark Lord," who is a Ganondorf-style teleporting knight, and "Final Form - Quite predictable" seems to be just a "hit one in three to trigger an astonishingly unfair amount of bolts of lightning to have to try to avoid"-style of boss.

Once everything is done and dusted you get to evaluate your quest and, if you so choose, you can go back and find every chest, every power, every room in every dungeon, and then it's finally 100% over. As a budget title, it is excellent, as it sticks to its guns and doesn't muddy itself up with a convoluted story, or a fluffy runaround outside before you can even find the dungeon - it's focussed dungeon crawling. Though it doesn't encompass pitfalls, water hazards or jumping, this game manages to ensure that its simplified mechanics work well and amazingly provides compelling fun throughout the measly four stages. If each were slightly more distinctive in design, I know that this title would be a heck of a lot more playable, and massively more memorable of an experience. The fact that the two types of puzzles are repetitive, the dungeons all look the same, and the bosses kick your ass several times before you even realise how to kill them makes this game mediocre at best, even though it's clearly short and sweet with a £5 pricetag. Having said that, the SFX and chiptunes were quite varied and actually pretty decent, which is a hugely redeeming feature. At least you get some awesome retro-inspired tracks to keep your head rocking all the way through the brain-scratchingly annoying Sokoban puzzles. If you're a fan of just exploring the vaults and catacombs and want a coffee-time brain teaser of a challenge, then this game is ideal.