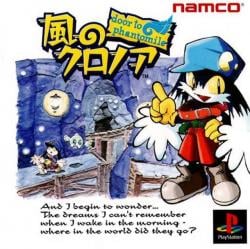 Reviewed on Lakka for the Raspberry Pi 4. I also used the JPN box art because it looks better, but the NA one is just fine.
Before I get to the review proper, I want to say that this probably isn’t the most objective review. The Klonoa franchise is one of, if not might favorite, and this game is one of my favorites of all time. I’m clearly biased and I will not deny that. Now, onto the review. Kaze no Klonoa: Door to Phantomile, or simply Klonoa: Door to Phantomile outside of Japan (I will refer to it as DTP in this review), is a 2.5D platformer, developed and produced by Namco. For the unaware, 2.5D is a subgenre of games, ones that are technically 2D but utilize 3D space for various things. In that regard, DTP is one of the best in the subgenre at utilizing it’s full potential, but we’ll get to that later. DTP was met with mostly positive reception. IGN gave the game an 8/10, proclaiming “The problematic 2 1/2 dimensional platformer is perfected in this cute well-designed game.”. Gamespot agreed, giving the game a 9.2, with a label of superb. Is Klonoa DTP still this good? Let’s take a look.

Klonoa: Door to Phantomile begins with a cutscene, that just shows off, well, something. Then one of the best title screens, just happens.

Then you navigate the file creation menu, and it is an event. I think that’s one of the best things about this game; everything an event. A rock falling is an event, knocking over crates is sometimes an event, the “wahoo” that Klonoa spouts out makes double jumping an event. Anyways, onto the game itself.

The story starts off with a cutscene, and the beginning of it is hard to describe in words, watch it for yourself. Later in the cutscene, it shows the titular Klonoa exploring a forest and finding a ring, and then attempting to pull out a ring, and eventually succeeds. Then a strange blue ball, Huepow, comes out of the ring. Klonoa and Huepow then go out and play, but then a strange dark cloud sucks them up and Klonoa wakes up, showing this as a dream. You really have to watch it for yourself to understand.

Then the game switches from FMV to normal graphics and it shows a ship crashing into the side of a mountain, and the player’s sent off to the game itself. I won’t go over every plot detail like this, but I think you’ve already been able to grasp that this game places more emphasis on story than most games. There are also a number of twists and really emotional moments in the story that always keep the viewer engaged.

Anyways, onward. After clearing the first two stages, the player will encounter Gadius and Joka, who will be the game’s main antagonists for the rest of the plot. He spouts some dumb shit about some “Song of Rebirth” that becomes important later down the game. I also want to point out how threatening Gadius is even though he doesn’t appear that often, and it’s all because of the voice. Seriously, this dude’s got bass. On the topic of voices, I feel that’s it’s in order to talk about this game’s voices. Instead of using a real language and suffering the consequences of shitting localization (looking at you Megaman 8), the devs instead decided to make a fictional language called Phantomilian. Despite what you might think, the acting is surprisingly convincing. The acting lines up with the text pacing of the text boxes and the characters are quite dynamic and lifelike. You can tell what a character is thinking and feeling by their voice, which is quite impressive. Anyways, the game’s unique voice acting really helps the plot’s more emotional moments.

Damn, I’ve gone off topic. Gadius finds a singer named the “Songstress Lephise” and states that the world doesn’t need rebirth, so he kidnaps her. So after the player deals with a boss, Klonoa and Huepoe find a Moon Pendant, and decide to take it to Klonoa’s grandpa, his only caretaker and family, for help. Grandpa informs the duo that it is the crest of the Moon Kingdom, which is where the legendary Songstress Lephise resigns. Klonoa is then informed to go visit Granny in the Forlock Forest. And now I’ll get into the spoiler section. This might sound early, but this game has lots a things that I really don’t want to spoil.

Okay, for some reason this video won't embed, so I'll just leave the link here: https://www.youtube.com/watch?time_continue=2&v=Sr3EDCD_ut8&feature=emb_logo

Klonoa, unaware of where to go next, then runs into Pamela, a side character introduced earlier in the game, who can now fly somehow (don’t ask questions), and then flies up to the Sun Kingdom. Nothing of importance happens until the end of this part. Klonoa runs into to Gadius, who reveals his plans and motivations to Klonoa. Gadius has been rejected by the world and wants to take revenge on the world by awakening the nightmare monster thing Nahatomb. He then disappears and Klonoa finishes off Joka. The tower the two are on raises and summons the Moon Kingdom.

Klonoa rides Pamela up to the Moon Kingdom. Once Klonoa gets up, he and Huepow speak for a minute, and Huepow seems to be hiding something, like he’s ashamed. The theme to the stage, Untamed Heart, helps further this feeling. Just listen to it.

At the end of the stage, residents of the Moon Kingdom greet Huepow, who is revealed to be the prince of the Moon Kingdom. Things don’t seem to add up, but Klonoa doesn’t care. He and Huepow are such good friends that he helps him anyway. Klonoa and Huepow then raced after Gadius, and beat him up. Despite that, he had already summoned Nahatomb. Many of the side characters then joined Klonoa and Huepow to help fight Nahatomb. The gang finish off Nahatomb and go back home.

The game ends with a cutscene between Klonoa and Huepow, showing them on the side of the cliff. Klonoa asks Huepow if he’ll return to the Moon Kingdom, but he holds it off. Huepow seemingly doesn’t even want to look Klonoa in the eye, showing us that something’s off. Huepow then tells Klonoa that he doesn’t come from Phantomile, but is instead a Dream Traveller, who travels to different dreams to restore balance, and Huepow summoned him to save Phantomile, and gave him fake memories to ensure Klonoa’s loyalty. As Klonoa is being told that his life is a lie, he rejects it. He doesn’t believe it. But Huepow ensures him that’s true, and that he must leave Phantomile. The cutscene then becomes an FMV, showing the Songstress Lephise singing the Song of Rebirth to restore the world to its original self, and now that his job is done, Klonoa is sucked away from the world, and the player is left crying for the next hour. I’ll say that this is the absolute most emotional scene I’ve ever experienced in a video game. Watch it now.

Okay, done with the story, now on with the rest of the game. So Klonoa’s main way of attacking enemies is using his Wind Ring, which Huepow powers. Klonoa’s Wind Ring shoots a bullet with a very short range, and is used to pick up enemies. With an enemy grabbed, Klonoa can either throw it or use it to double jump. While this might sound very simple, Klonoa can also interact with the background by pushing Up or Down on the D-Pad. The game does an amazing job at fleshing out it’s simple mechanics, always finding new ways to test the controls and mechanics. The game also has various enemy types and bosses to keep the mechanics fresh.

Another one of this game’s best assets is the use of the camera. It is often very dynamic and cinematic, but never hinders gameplay. The cinematic camerawork helps keep the game varied throughout, and keeps your eyes glued to the screen.

While these very simple mechanics might sound like they would make the game terribly repetitive and boring, the game’s short length keeps that from happening. While that might sound like a criticism, I’ve never had the mindset that dollar signs should equal time played. And the game also has a fair bit of replayability.

This game has two main side quests; the captured Phantomillians and the 150 Stones. In each stage, there are 6 bubbles containing Phantomillians that have been captured by Gadius. These can be hidden in various places and ways, which keeps looking for them interesting. Finding all the Phantomillians will unlock one final bonus level titled “Balue’s Tower”. You can also go out and collect all 150 Dream Stones in each stage. Dream Stones are basically Klonoa’s equivalent to coins, and there are 150 Dream Stones per stage. Unfortunately, the only things this unlocks is a blue Dream Stone icon on the world map.

Visually, this is one of the best on the system. The art direction was supposed to reflect a dream motif, and they did a fantastic job. I’m not one to critique the game visuals technically, but I looks great. The game uses sprites instead of models for characters, most enemies, collectables, and more. The game uses a similar technique to M&L: Paper Jam to disguise sprites to look more like models, and it’s surprisingly convincing.

The soundtrack is also one of my favourites. I lack expertise in the field of music, so I really can’t provide a better critique on the music that’s more complicated than “it makes me ears feel good”, but this music definitely makes my ears feel good. Here’s some favourites:


While my limited talk about gameplay might make this game seem shallow, it really isn’t. The level design keeps the great controls interesting, and the camerawork, engaging plot, great visuals and amazing OST keep me interested from beginning to end. There really isn't much negative to talk about. Klonoa: Door to Phantomile is tons of fun throughout and is a masterclass in almost every aspect. This game is one of my favourites of all time, and I know that I'll keep coming back to it time and time again. This is one of my favourites for a reason. This is a really easy recommendation. You can buy this game off PSN for the PSP, Vita and PS3 for just somewhere around $6. Getting a PS1 physical copy cost a butt-fuck-ton, so for physical buyers I'd recommend the Nintendo Wii remake, which I'll cover another time. If your getting the Wii version, though, make sure to go into the options menu on the title screen and change the voice option over to Phantomillian.

Now that we have done, squeal time bitch. Please tune in next time for my glorified love letter to Klonoa 2: Lunatea's Veil.
Verdict
raxadian and Stealphie like this.
Like this review