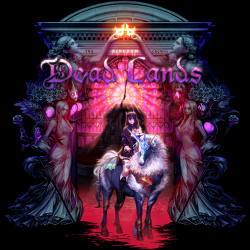 Single player
Local Multiplayer
Online Multiplayer
Co-operative
Kingdom Two Crowns has been out for almost a year and a half now, and many have already fallen in love with the minimalist strategy game. Recently, the game got a free update that added Dead Lands, a new kingdom setting that crosses the world of Kingdom with fellow indie darling Bloodstained: Ritual of the Night. How well does this crossover work, and what does Bloodstained bring to Kingdom?

Before we get too into the updated content, I’ll quickly recap the basic concept of the original Kingdom Two Crowns: you take on the role of a monarch, operating entirely atop your mount. Your goal is to build your kingdom, recruiting peasants to take on the different roles in your settlement, upgrading your settlement’s defences, and ultimately expanding your kingdom. Every night, mysterious creatures called the Greed come out to steal your tools and money, which is why upgrading your defences is crucial. If the Greed takes all of your money, the next thing you’ll lose is your crown; no crown, no monarch. You must protect your kingdom and its resources from the Greed at all costs. 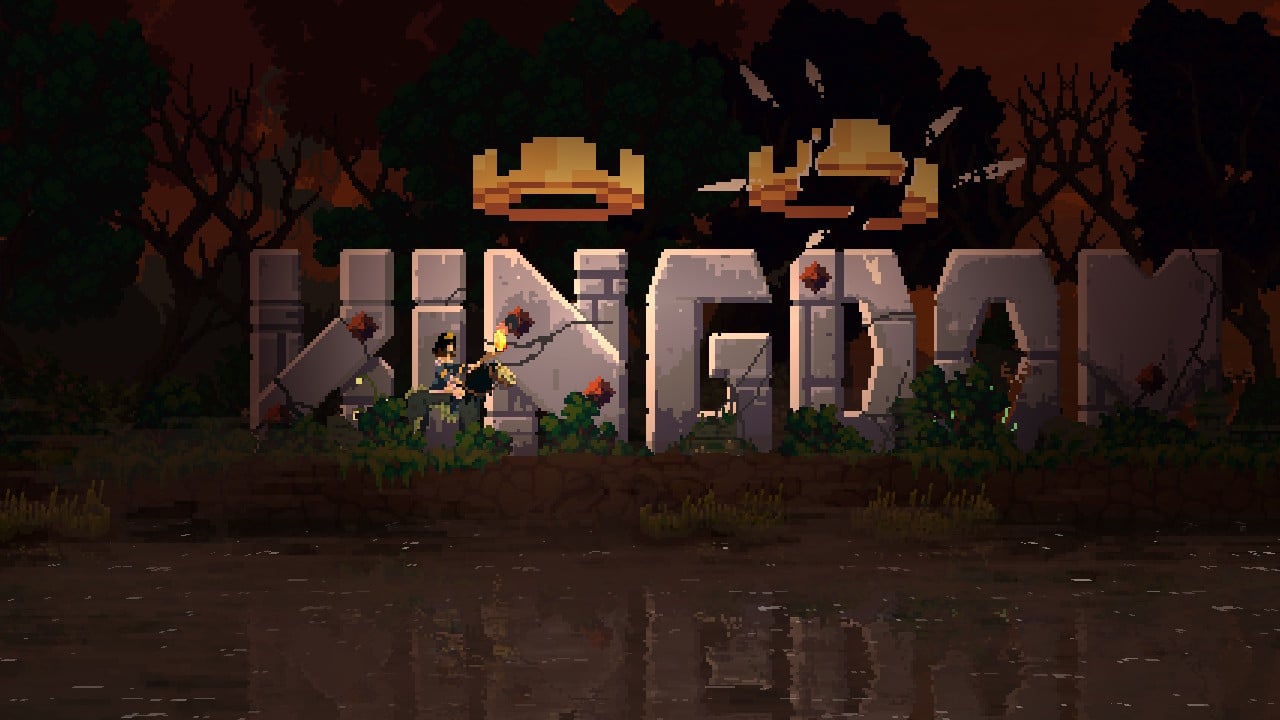 Now, at its core, Dead Lands is essentially the same game here. Not a ton has been changed, but there are a couple of major differences between this update and the base game. The first change is the atmosphere. The new Dead Lands setting takes direct inspiration from Bloodstained: Ritual of the Night, and it definitely does not disappoint. The new setting is distinctly gothic and dark, complemented beautifully by the signature red and purple color scheme of Bloodstained.  Even during the day, you rarely ever see sunlight in your kingdom. Whether because of the rain, cloud cover, or fog, your world is almost always deprived of sunlight. Thankfully, this doesn’t change when the Greed comes out to cause havoc. But it does keep the gothic aesthetic tied together and at the center of the new setting.

The second, and in my mind most significant, change is the ability to switch monarchs as you play. In the base game, the only character customization you had was at the start of the game, where as the game loaded you were able to switch the sex and outfit of your monarch. Once in game, the only way to change your monarch's look was to die or start over. Dead Lands removes this customization entirely, in favor of a new system. There are four playable monarchs throughout the course of the game, all directly from Bloodstained: Ritual of the Night. You start as Miriam, but as you play you unlock and gain access to Zangetsu, Gebel, and Alfred. Each character has a special ability entirely unique to them, that’ll help you defend your kingdom: Miriam can use her whip to create ice that will freeze the Greed in their tracks, Gebel can transform into a bat faster than any mount in the game, Alfred can create a spectral clone of himself that draws the Greed’s attention, and Zangetsu can increase the troops’ battle proficiency and speed with a rallying cry. I really like these abilities, and found that it helped to strategize which monarch you use. Finally, each character is rendered perfectly in the simplistic pixelated style Kingdom is known for. They’re all distinct enough to recognize who is who at a moment’s notice, while matching Kingdom’s style without flaw.

The original Kingdom Two Crowns didn’t have much for a story, and Dead Lands isn’t any different. The focus is still entirely on gameplay, and the story is still the beautifully simple “build, expand, defend.” This did surprise me a bit, given how story-centric Ritual of the Night is. I honestly expected there to be more of a story because of the crossover, but the game works just fine without any central story to push it forward.

Gameplay is simple but effective. You spend the entire game controlling your monarch from atop their mount. As a monarch, all you can do is fund the upgrades and projects needed to build your kingdom. You do this by paying coins and gems. As mentioned earlier, you recruit new citizens by literally paying them a coin. The citizens then make their way to your encampment, pick up whatever tool is available, and get to work on whatever needs to be done. There are hunters, builders, guards, farmers, and more. As monarch, each day you can collect extra coins from your citizens, as long as they survive the night, which you then use to help fund more builds and upgrades. It’s a bit slow, but it requires a lot of strategy, and making sure you focus your resources in the areas where they’ll be most effective.

There is one thing I’ll complain about with this gameplay. Beyond the initial short tutorial at the beginning of the game, you’re given next to no direction on what to do, or what the different things you’re paying for will do until the money is spent, and it’s actually been built. Now I’m not someone who needs his hand held while playing a game like this, and there are enough clues as you begin building new stations to get the general idea of what it’ll be for, and if you’ll need a citizen to man it. But a short description of each new station built would go a long way, in my mind, to help newer players get an idea of what they’re funding, especially with the importance the game puts on smart resource management.

What We Liked ...
What We Didn't Like ...
7
Gameplay
The gameplay is simple enough to pick up quickly. It's addictive, and keeps you wanting to expand your kingdom.
7
Presentation
The minimalist graphics and sound that Kingdom is known for is in full force here. The new setting is the perfect compliment for Bloodstained's characters, who fit in here with no issue.
8
Lasting Appeal
There's always plenty to do, from rebuilding after a Greed attack to expanding your kingdom and building its defenses.
7.5
out of 10

Dead Lands does a great job combining these two franchises. At the core, this is still Kingdom Two Crowns, but the additions improve upon the base game and bring an update that both Kingdom and Bloodstained fans can be happy with.
Reactions: UltraDolphinRevolution, Torina, Ericzander and 1 other person
Share:
Facebook Twitter Reddit Pinterest Tumblr WhatsApp Email Share Link
Damn. Curse of the moon had really decent pixel art. Strike that, it had actual pixel art, like a real nes game. But this? Another bunch of pixels lazily put together in an ugly manner.
Reactions: Vorde
This game looks like up my alley. Thanks for the review.
Reactions: Ericzander and RyRyIV
For a very long time already I've been wondering WHY doesn't ignore settings apply to reviews and blog posts comments. I hope it can be fixed. In any case, I am just bringing this up in case it was forgotten. @shaunj66
Reactions: Ericzander

sarkwalvein said:
For a very long time already I've been wondering WHY doesn't ignore settings apply to reviews and blog posts comments. I hope it can be fixed. In any case, I am just bringing this up in case it was forgotten. @shaunj66
Click to expand...

But then you'll miss out on one of the three guarantees in life.
1. Death
2. Taxes
3. Reploid ignoring the content of a GBAtemp review and instead, as you said "dropping all kind of incendiary baits, just seeking some attention to fight boredom."
Reactions: Silent_Gunner, RyRyIV, Zach9o9 and 1 other person
As a RTS maniac, I have an eye on this game for quite some time now.
I think you gave me the little push I needed to dive in, thanks !

Seriously, thanks to you I may finally play something else than Kane's Wrath or Halo Wars
Reactions: RyRyIV and Ericzander

Torina said:
As a RTS maniac, I have an eye on this game for quite some time now.
I think you gave me the little push I needed to dive in, thanks !

Seriously, thanks to you I may finally play something else than Kane's Wrath or Halo Wars
Click to expand...

Awesome! I'm not super huge on RTS's and I still enjoyed the game. So I'd imagine someone who loves that game type will feel right at home here!
Reactions: Torina

RyRyIV said:
Awesome! I'm not super huge on RTS's and I still enjoyed the game. So I'd imagine someone who loves that game type will feel right at home here!
Click to expand...

If you have other gems like this one, don't be afraid to share.
What are your favorite strategy games ?

sarkwalvein said:
For a very long time already I've been wondering WHY doesn't ignore settings apply to reviews and blog posts comments. I hope it can be fixed. In any case, I am just bringing this up in case it was forgotten. @shaunj66
Click to expand...

I personally ignore the man. Nothing kills a troll like not feeding them, right, @Nobody_Important4u!?

@ KenniesNewName: I wouldn't walk naked in a church but their might be shouting if a priest tries to do anything to me 7 minutes ago
Chat 2