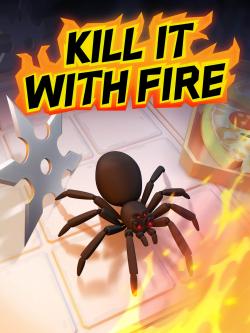 Single player
Local Multiplayer
Online Multiplayer
Co-operative
A game focused entirely on decimating the population of spiders in your home and beyond? Sounds like a dream come true for any arachnophobe! Let’s take a look and see if Kill It with Fire is spider-killing fun, or if it deserves to be squashed.

It’s a common trope; you’re enjoying the day, minding your own business, when out of nowhere a spider rears its ugly head. The immediate reaction is “well, time to burn down the house.” It’s a feeling I’m sure most have experienced at least once, though one that most hopefully don’t act upon. If you've ever felt this way, then Casey Donnellan Games has the game for you in the ultimate arachnophobic power trip Kill It with Fire, a game light on story but heavy on fun as you launch a full-scale campaign of war against the eight-legged, web-spinning menace in an effort to protect your entire town. 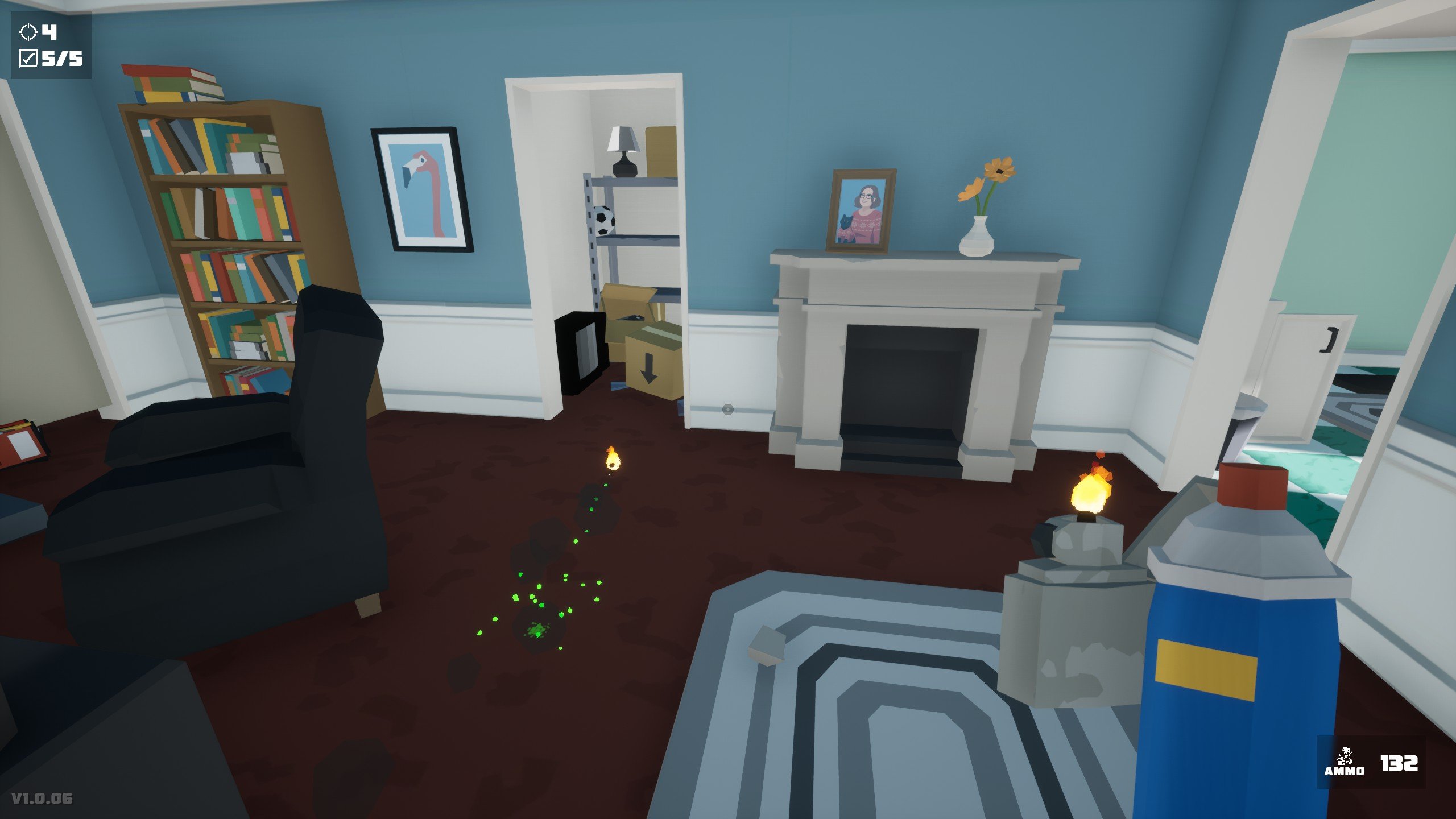 The main attraction of the game is, obviously, killing spiders. But the amount of options you have to do so is a bit absurd in the best way, and the means are left almost entirely up to your imagination. Your weapons start normal enough, beginning with a clipboard that doubles as your task display. You soon graduate to the game's namesake with a lighter and hairspray combo, and from there all sanity goes out the window. As you advance through the levels, you quickly gain access to a variety of firearms, C-4 explosives, molotov cocktails, and even a rocket launcher, among other options, ranging from mundane to insane. You can even pick up level specific objects to temporarily expand your arsenal, such as a flower vase, video game controller, or even a pizza missing a single slice. The variety of weapons and means to kill spiders also takes its toll on the environment, with houses trashed and environments totally destroyed along the way, adding to the insanity of an already out-there premise in the best way. 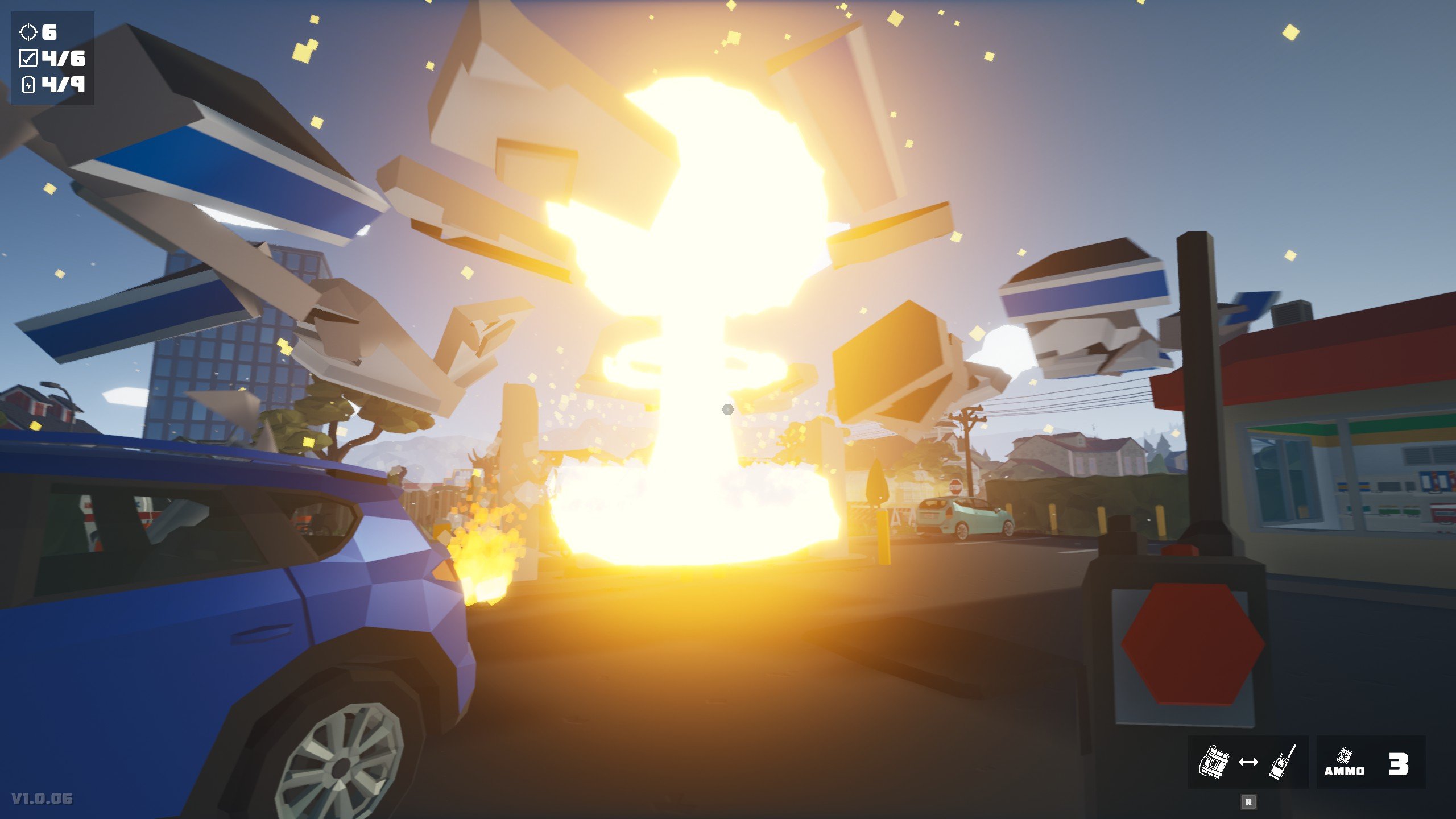 Different spiders have different abilities, and some are harder to kill than others. As an example, some spawn mini-spiders upon death, some shoot webs in your face, and some explode on impact. These differences do help to balance the difficulty, or lack thereof, which comes from there not being an in-game health system. This means the spiders can’t actually do anything to fight back as you violate the Geneva convention in your mission to destroy them and their families. Perhaps the lack of a health system is a commentary on how most spiders are completely harmless, and usually just as afraid of you as you are of them. Or maybe it’s just meant to play into the fantasy of it all, allowing you to obliterate spiders left and right, in any way you want, feeling like a vengeful god of death and destruction in the process. Either way, it’s damn fun. Despite how easy most of the game ended up feeling, I found myself caught up in the power fantasy of leading a campaign of torment against the miniature monstrosities, and enjoying every single outrageous second of it. Never in my life have I had the desire to shoot a spider, but now I have to stop myself from reaching for a gun whenever I see one in my house.

Beyond simply killing spiders, each level has a list of objectives to complete. Technically speaking, the only requirement to advance through, and leave, each level is to kill a set amount of spiders. But as you advance through the levels, you pick up more objectives to complete. Most of the objectives amount to killing a set amount of the new type of spiders in that level, or using a unique method of killing spiders such as throwing a book at one, or using a single shotgun blast to kill multiple spiders at once. Other objectives have nothing to do with spiders at all, like breaking all of the dishes in a kitchen or setting fire to every computer in an office building. The objectives add some variety to the spider killing, and allow you to collect more powerful and ridiculous weapons as you complete them, as well as other character upgrades to make yourself a more effective spider-killing machine. Complete every objective in a level, and you gain access to the arachno-gauntlet: timed challenges accessed through a boombox in each level that task you with killing a number of spiders under specific circumstances, like shooting a set amount without reloading your gun, using only fire, or using a different type of weapon for each kill. Completing an arachno-gauntlet gives no immediate reward, but does pay off in the post-game epilogue level where you can only open doors based on how many of these challenges you’ve completed. Every level is filled with enough to keep you entertained through its entirety, though its entirety sadly isn’t all that long.

This brings me to my chief complaint with the game. It’s just too short. It took me a mere three hours to reach the main ending, and that’s even with having explored levels to complete most of the objectives and arachno-gauntlets along the way. To the game's credit, there is a secret ending in the epilogue level that you’re able to reach should you go through and complete every arachno-gauntlet, but even that won’t add a whole lot extra to your playtime. On top of that, as I replayed levels I noticed a lot of spiders ended up spawning in the same spot, which took a bit out of it for me on the replay I had to do when my save data ended up, somehow, getting deleted. Don’t get me wrong, it was still fun to play through a second time, but the lack of RNG in some of the spider placements made my second time through slightly less fun, as I sped through the levels much quicker while knowing how best to complete the objectives, and where my eight-legged prey was. All of that said, the game does an amazing job packing as much fun into the short timespan as possible, making every second count.

The art style is another thing I really like here. Everything has a distinct “cartoony” feel that matches the absurdity of the premise very perfectly. The cel-shaded graphics help accomplish this and give the game some nice uniformity across all levels, items, and spiders. Every set piece, spider and item is made up of simple shapes in a way that further compliments the aesthetic, giving a really nice minimalistic charm to the whole game. Now, granted, it’s not the most original art design in the world. In fact, most players will likely notice similarities between the artistic style of Kill It with Fire and another popular tinyBuild published game, Hello Neighbor. This isn't a knock against the game, just an admission that though I’m a fan of the art style here, it’s really nothing new.

The sound design varies as you play through the game. On the main menu while selecting your upgrades and level, you’re given a very fun and upbeat spy-like theme. In the actual game, the majority is silent and filled with the ambient sound effects of hidden spiders, emphasizing their omnipresent nature in the game. Once you do uncover a spider in need of a swift kick in the thorax, the music quickly kicks in, in the form of an erratic melody of strings that sounds straight out of a horror movie. The arachno-gauntlets, meanwhile, offer a rush of rock music that sounds like it’s straight out of Doom as you rip and tear through the spider slaughtering challenges. It’s all pretty simple, but it really just works well and adds to the joke of the game when the music is just as varied and insane as the weapons you use to hunt the bugs.

And that, really, is the core of this game; it’s a joke, in the best possible way. It’s chaos incarnate, encouraging total rampant destruction as you eliminate some of the creepiest bugs on the planet. Never would it be realistic or reasonable to meet a spider in real life with this type of response. But if you’re an arachnophobe like me who’s gone on full scale manhunts to eliminate a single spider in your living room, Kill It with Fire offers a cathartic release against these arthropodal abominations in an amazing way. It might not be challenging, and it might end too quickly, but the game takes advantage of every single second it has, and fills it with fun the whole way through.

Kill It With Fire - Trailer

What We Liked ...
What We Didn't Like ...
8
Gameplay
With a wide variety of weapons, each more obnoxious than the last, it's hard not to have fun while wiping spiders off the face of the earth. It's admittedly a bit too easy, but the point of the game isn't the challenge, it's the power trip.
9
Presentation
Kill It with Fire is a tight package, with visuals and sound that match the wild ride that it is perfectly.
6
Lasting Appeal
Despite just how fun the game is, it really can't be ignored just how short it is. The objectives and arachno-gauntlets inspire exploration and experimentation in the levels, but the game doesn't offer much reason to come back once you've seen everything it has to offer.
9
out of 10

At the end of the day, Kill It with Fire knows exactly what it wants to be, and succeeds at it in the best way. It’s an arachnophobic power fantasy that’s just pure, unfiltered fun the whole way through, even if the ride isn’t as long as I’d like it to be.
Reactions: Ericzander, Stealphie, Pokemon_Tea_Sea_Jee and 3 others
Share:
Facebook Twitter Reddit Pinterest Tumblr WhatsApp Email Share Link
This looks damned good!

VR games are always short and sweet.
Reactions: Darth Meteos and RyRyIV
But I don't think you asked the most important question...

Silent_Gunner said:
But I don't think you asked the most important question...

Honestly, I wish. If he did, this would be a 10/10
Reactions: Silent_Gunner
Heh, I was looking at this game a few days ago. Glad to see it's good. Also thinking about trying "Hotel R'n'R", both look entertaining for a few hours at least. These 2 games seem pretty similar in their ideas.

Thanks for the review! Will check this game out soon. Though I've been craving some Alien:Isolation VR recently so I'll probably end up playing that after an hour of this game.

Edit: Could have sworn this game was for VR.. now that I look at the page again there is no mention. I'm going insane!!
Reactions: RyRyIV
SUCH A MEME INDIE GAME scored 9? as same as Zelda BOTW ?! WTbloodyF?

Well now that’s just silly, I wouldn’t score this indie game the same as what the site gave BOTW.

BOTW just scored 7? wow, just WOW
He must hate Zelda so much, my salute to reviewer.

Silent_Gunner said:
But I don't think you asked the most important question...

@ Dark_Phoras: I'm midway through Prey, second watch. I also started another movie that I won't say to avoid... 4 minutes ago
Chat 1