Single player
Local Multiplayer
Online Multiplayer
Co-operative
Ember Lab’s debut title, Kena: Bridge of Spirits, is out now. With its Pixar-meets-Zelda aesthetics, is it as good as it looks?

On her journey looking for the Sacred Mountain Shrine, Kena comes across a cryptic Spirit with a horned mask with no apparent good intention. But it doesn’t matter for Kena is a Spirit Guide who has to help such trapped spirits move on to their ultimate resting place.

While the horned mask spirit eludes her, it is not the only spirit that Kena will come across as she ventures forth in her quest. The latter will prove to be an eventful one where our protagonist will come across a colorful cast of characters, explore a dense forest and help clear the corruption plaguing the environs while unraveling the secret behind those happenings. 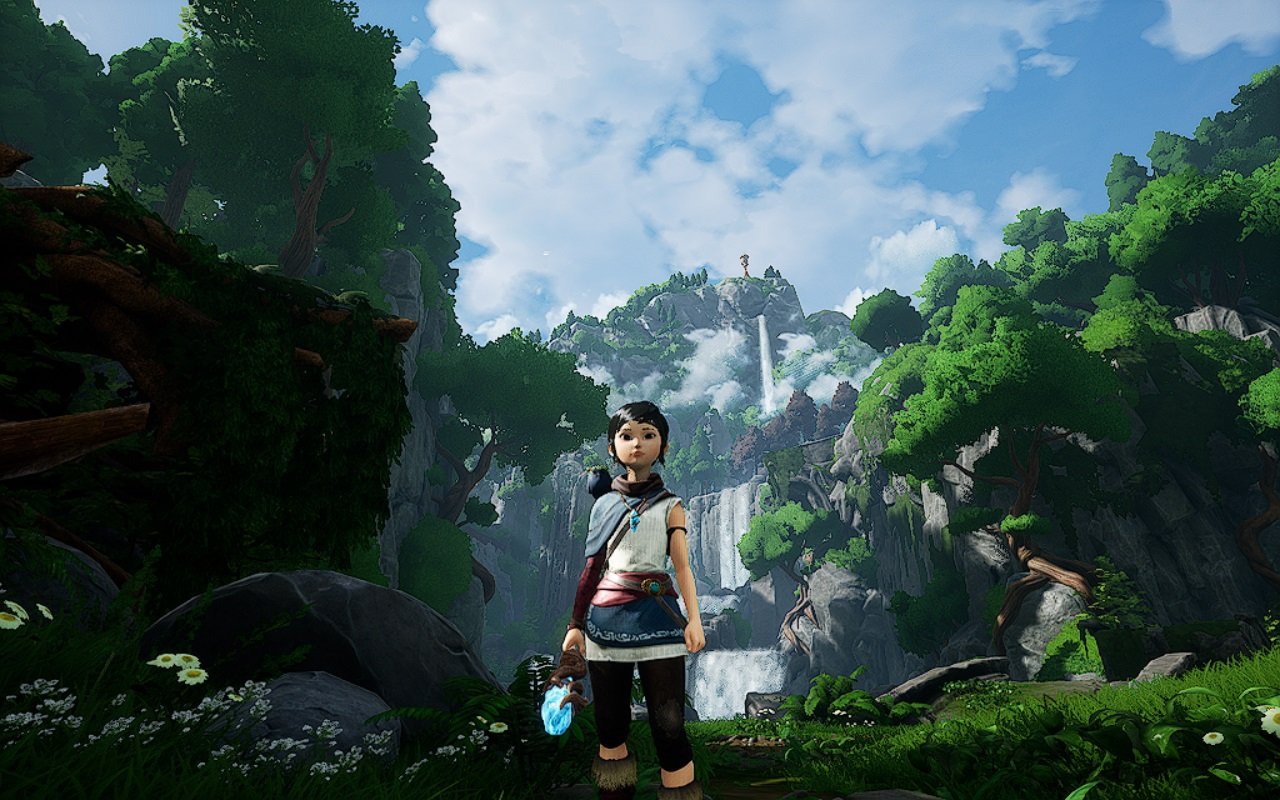 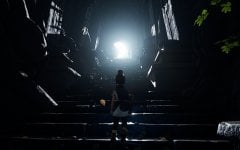 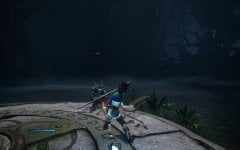 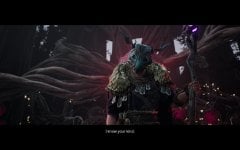 Kena: Bridge of Spirits looked charming from the get-go and it didn’t disappoint throughout my gameplay. You will control Kena as she treads across a forest lush with diverse foliage, jumps from ledge to ledge across perilous cliffs, strolls by abandoned buildings, swims in clear rivers dotted with pebbles and crosses shoddy wooden bridges. With its gorgeous environment coupled with graceful animations, Ember Lab’s debut title is a feast for the eyes. It shows that they were the team behind the short Majora's Mask fan film (which I would urge you to take a look at here if you haven’t already). Incidentally, masks play a key role in Bridge of Spirits’ plot and lore as with them, Kena can catch snippets of a spirit’s past. 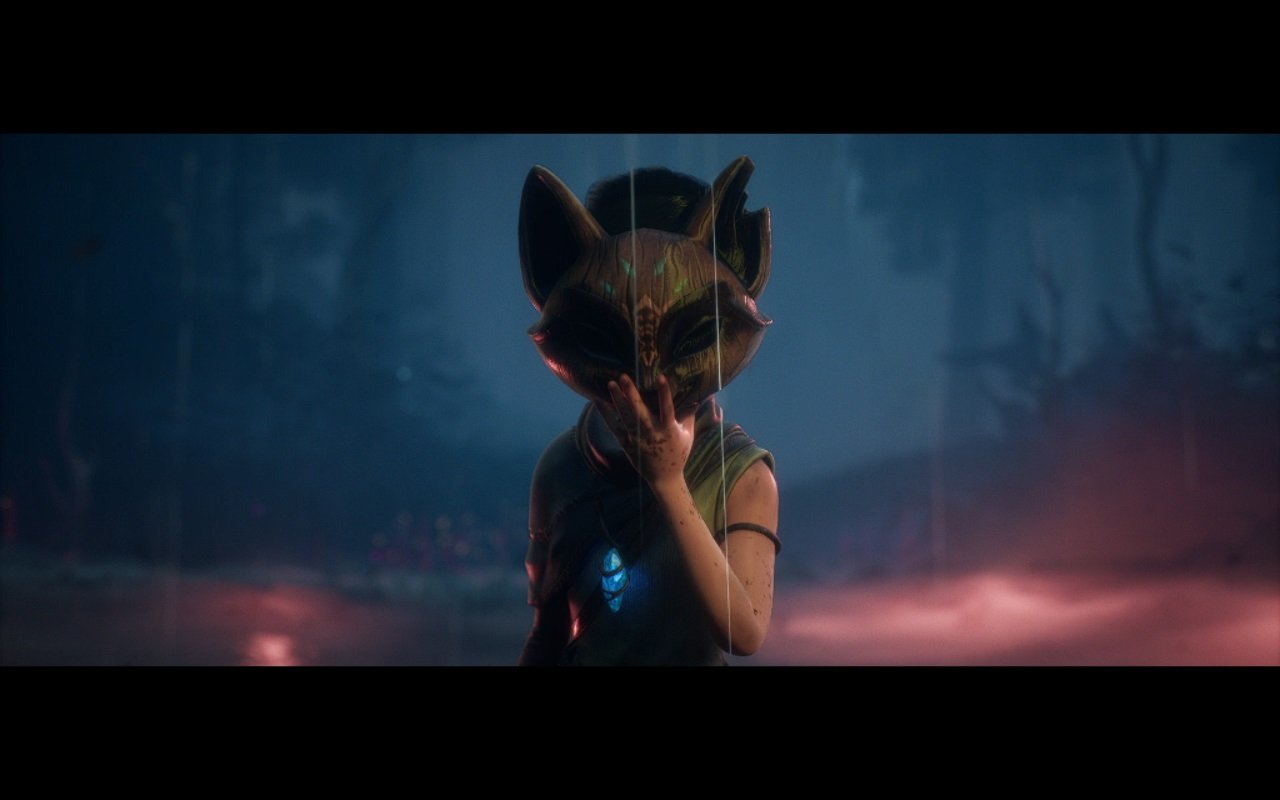 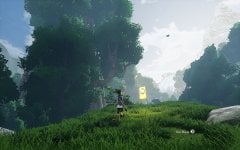 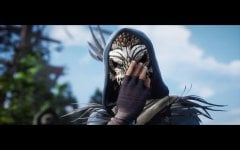 Of course, just focusing on the aesthetics won’t make the cut as a video game since the gameplay will need to weigh in as well. On this front, Bridge of Spirits fares fairly well, although it does feel wanting in certain aspects. This title’s gameplay is a mix of exploration, platforming, puzzle solving and a good chunk of fast-paced combat.

Assisting you in combat and exploration are the little, cutesy creatures called Rot that follow Kena around. They can help you move objects, immobilize enemies, restore health, and even cleanse poisoned flora. You can also upgrade/unlock their abilities by spending Karma points obtained by defeating enemies or cleaning corruption. By exploring your surroundings, you will get to find more Rots to join you and the more you find, the more actions they will be able to perform. 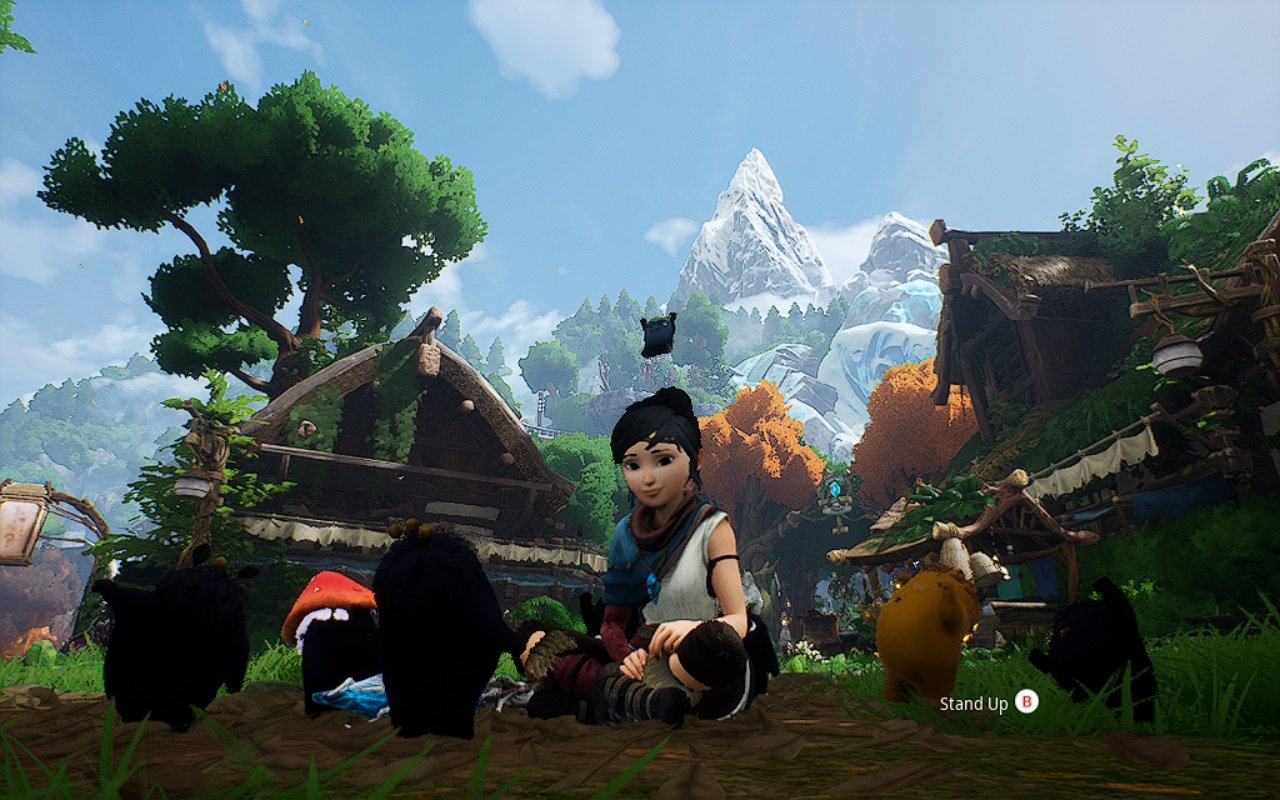 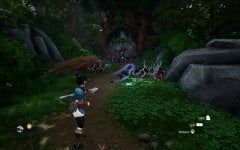 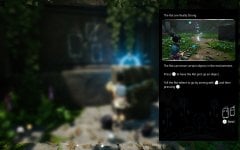 Combat sequences often rely too much on the set template of getting you to come across  a poisoned area of the forest, defeat nearby enemies, clear the corruption and proceed forward. This progression mechanic, while not uncommon in games, isn’t totally masked in Bridge of Spirits. But while this does work, it feels like the developers are playing it safe, to the point of bordering the gameplay to the verge of feeling mundane.

Moreover, even if you are free to choose your attack style during combat, your offense options are limited. You can switch between light, heavy and ranged attacks, with more abilities unlocking only later on. But the latter could easily have been made available from the get-go. You can also unlock a few new skills but these require karma points and are mostly slight variations and improvements of the base attacks. To give the skill tree due credit though, it nudges you to complete extra tasks and explore a bit more in order to gather karma points. 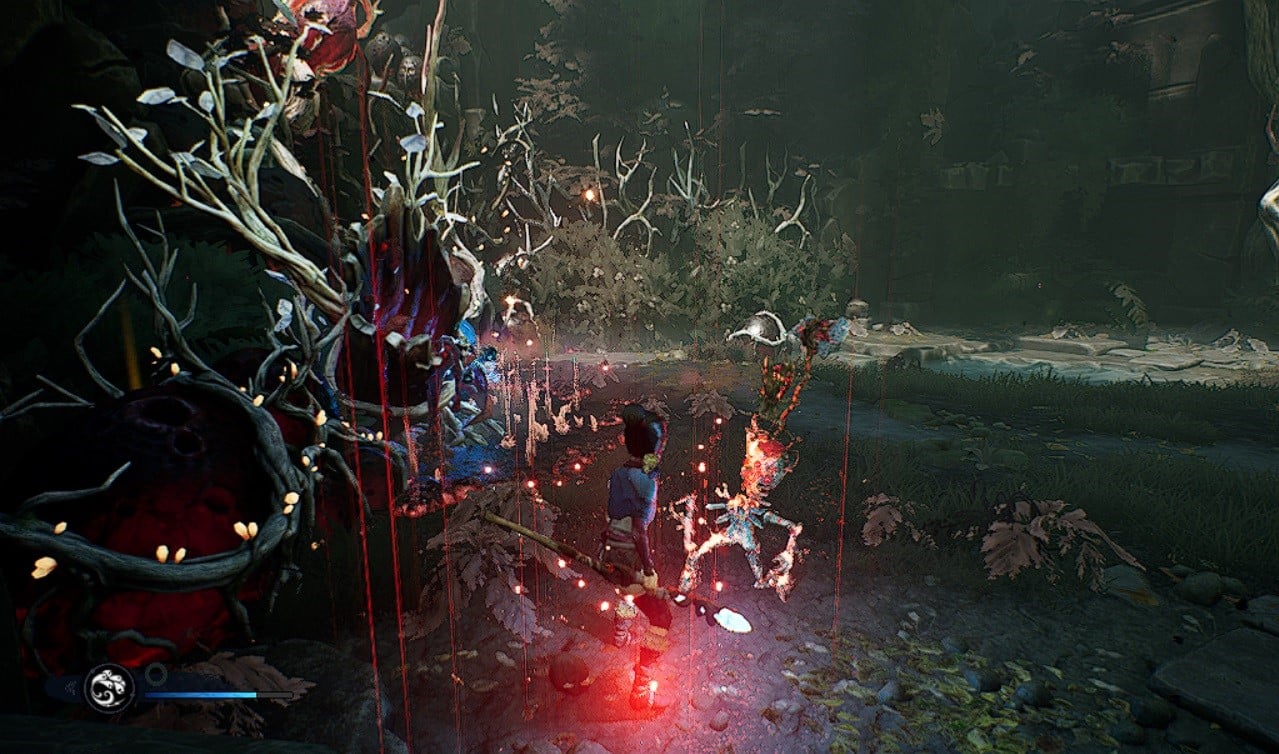 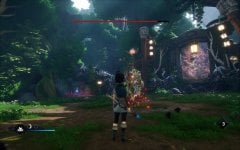 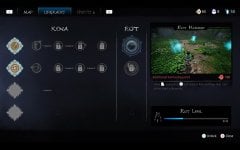 As for exploration, it is mostly linear with some level of freedom of exploration enabling you to explore around, find hidden items and even tackle some mission objectives non-linearly. But it is not open world in the same sense as Breath of the Wild (which it will inevitably draw comparisons to) as you cannot access everywhere or climb anything that meets the eye. But that’s not necessarily a bad thing as it helps to focus on the story and gameplay with less bloat.

But even with the exploration’s linear aspect, Bridge of Spirits tested my patience more than once. This is because the need to scrutinize the surroundings and peel your eyes for clues to advance, which are sometimes not very evident. In addition, prompts to use Rots in order to advance and even in combat can be challenging since they often require you to position Kena at a specific spot/look from a specific angle in order for the prompt to be seen. 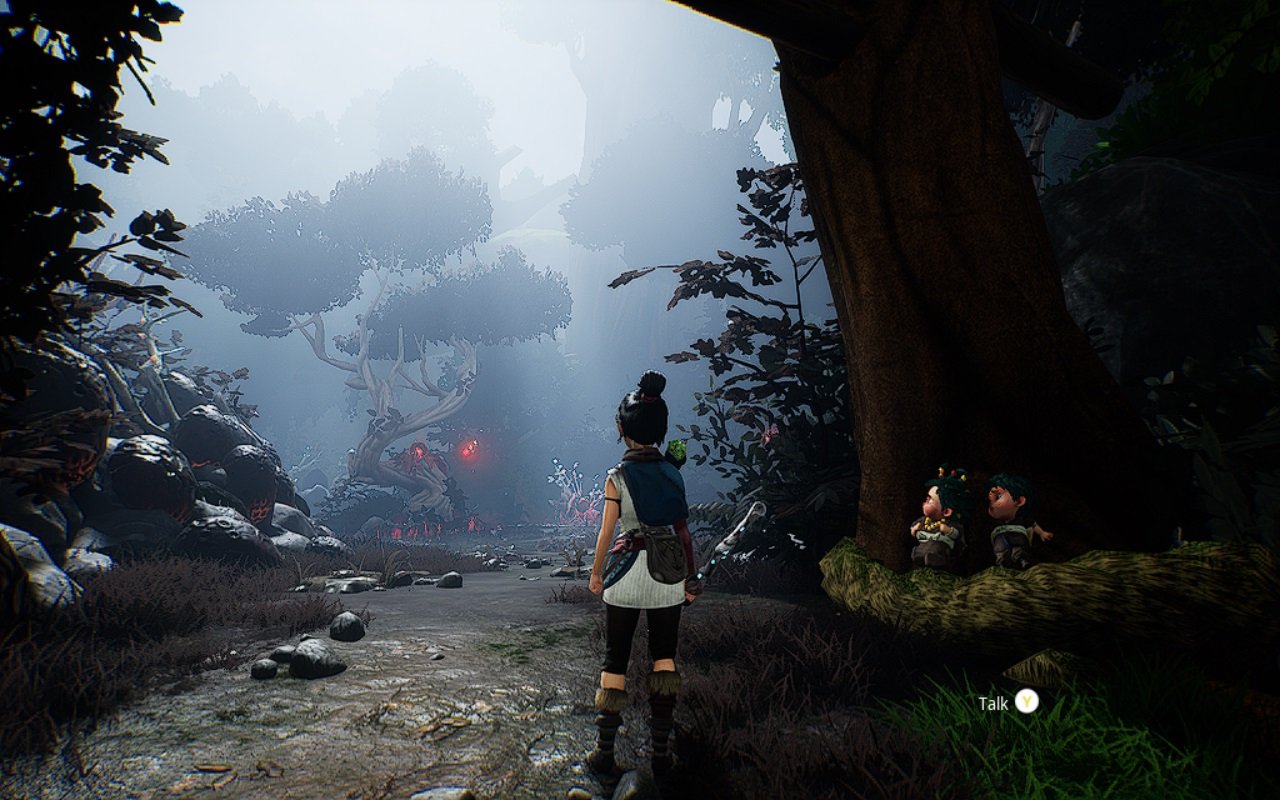 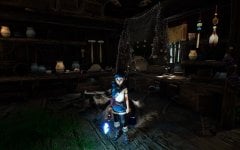 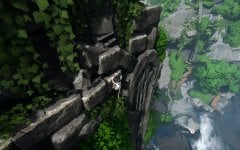 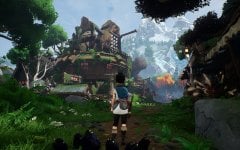 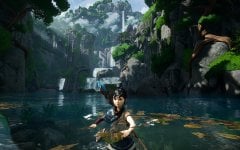 Regarding the story, Kena: Bridge of Spirits delivers an original and touching one that revolves around themes of the past, grief and resilience. However, Kena’s own backstory isn’t as fleshed out as the Spirits she helps guide to the afterlife or the colorful NPCs she comes across. In this sense, the player might not be able to fully relate to the protagonist. 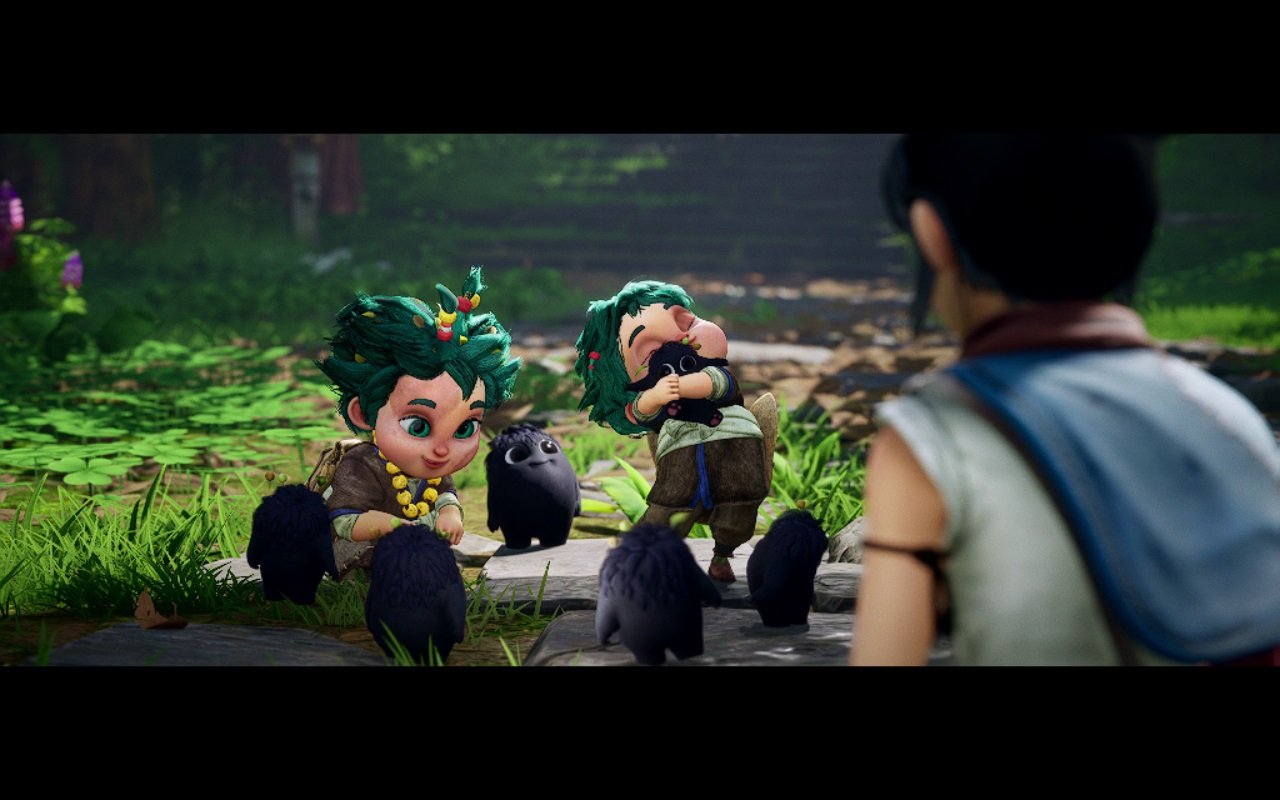 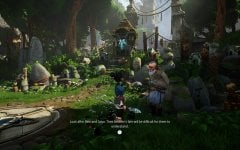 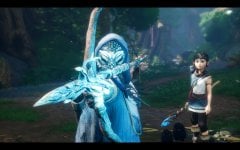 Overall, even if some aspects of Kena: Bridge of Spirits’ plot and gameplay could use some more polishing and you are still limited to a dense forest as the main location, the game still delivers a unique experience thanks to its beautiful visuals and original setting. The Rot mechanic, although feeling wonky at times, is interesting in that it is an integral part of combat and exploration. But as Ember Lab's first title, the developers are definitely off to a good start. And if you need one reason to indulge in Kena's fantasy world, it definitely has to do with taking in the gorgeous aesthetics.

What We Liked ...
What We Didn't Like ...
7
Gameplay
The template aspect of the progression mechanic, the limited combat approaches and some pesky meticulous requirements restrict Bridge of Spirits’ gameplay from feeling great.
8
Presentation
If you need a reason to play Kena: Bridge of Spirits, it will no doubt be for its gorgeous visuals and animations which deliver a visual delight cover to cover.
8
Lasting Appeal
Even if some aspects of the gameplay and plot could use some more fleshing out, Kena: Bridge of Spirits’ gorgeous visuals and approachable 9h-ish of play time will get you to stick to it.
7.8
out of 10

As Ember Lab’s debut title, Kena: Bridge of Spirits delivers a visually-striking experience and decent enough gameplay that warrants a closer look at what the developers come up with next.
Reactions: HitchensRIP, Ishzark, the_randomizer and 5 others
Share:
Facebook Twitter Reddit Pinterest Tumblr WhatsApp Email Share Link
How come these heroines never experience premenstrual cycle as a survival obstacle in video games? Likewise, when will men in video games give birth?
Reactions: Deleted member 568587
Patches seem to be often released for this game. Not that it is buggy, but I'll wait for combat update they promised, I'm sure it'll make the game more enjoyable to play
cant be anyworse than biomutant, oh my lord that game was trash and repetative

XDel said:
How come these heroines never experience premenstrual cycle as a survival obstacle in video games? Likewise, when will men in video games give birth?
Click to expand...

One of the stupidest comments I've read on this site. Bravo
Reactions: Naendow, Bauti, JonJaded and 12 others

XDel said:
How come these heroines never experience premenstrual cycle as a survival obstacle in video games? Likewise, when will men in video games give birth?
Click to expand...

Well I mean you hardly ever see people take a shit in video games. Link never takes a shit. That stuff would be unessecsary to include in a video game

Why don't we see Women with Breast Cancer in these games. Imagine the emotional drama of a women with breast cancer
One thing I want to point out that this game looks stunning on Ultra settings on PC than the ones shared in this review which I believe isn't maxed out.
Wow, I loved Majora’s Mask: A Terrible Fate, I never would have thought that they could use their exceptional animating skills to create a game, I will look into it soon…

SG854 said:
Well I mean you hardly ever see people take a shit in video games. Link never takes a shit. That stuff would be unessecsary to include in a video game

No More Heroes does it. Kind of. It's your save point.

SG854 said:
Well I mean you hardly ever see people take a shit in video games. Link never takes a shit. That stuff would be unessecsary to include in a video game

@ Julie_Pilgrim: youre not going to change that synth? 54 minutes ago
Chat 0