Single player
Local Multiplayer
Online Multiplayer
Co-operative
Embark on a humor filled adventure across multiple planets as you thwart the actions of evil pirates determined to rule everyone with the aid of alien scientists.

Ask a retro gamer about their fondest gaming memories and they are sure to mention at least one point-n-click adventure game. These games reside among a genre of video games designed to challenge puzzle solving abilities throughout relatively short stories and repetitive gameplay. What made these games so enjoyable was their creative use of humor, whimsical backdrops, and an intense sense of exploration. After achieving a level of popularity, these games began to fall into obscurity as the game industry shifted towards console gaming. At the time, the idea of controlling a point-n-click adventure with a d-pad and buttons probably seemed less than ideal. It took the touch screen [of cell phones and tablets] to provide a common alternative to mouse-driven software, eventually helping to rekindle the point-n-click genre. Thanks in part to Android mini-consoles, such as the OUYA, the reverse is also happening; touch screen driven games and applications are being coded with controller support in mind. This fresh developmental movement has helped to bring more point-n-click adventures back to TV screens, Kaptain Brawe: A Brawe New World being one such game.

Try to recall a game in which you were forced to click your way through dialogue trees. Perhaps you searched endlessly for which two objects could be combined into the next puzzle-solving element. All the while your character remains lost in a world of pre-rendered backgrounds and pop-up messages stating that object you just clicked on has no useful effect. If you have ever experienced a video game with these elements then you may have enjoyed a point-n-click adventure game. If you are still unsure what type of game Kaptain Brawe is, then take a moment to read about the likes of Monkey Island, Full Throttle, or Leisure Suit Larry. You will hopefully come to understand that games such as these are explorative in nature, often strongly GUI driven, and provide an intense level of puzzle solving through the combination of found objects across quirky, humorous, or fun storylines. 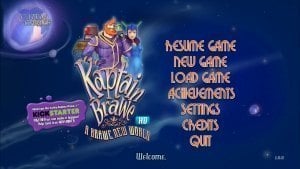 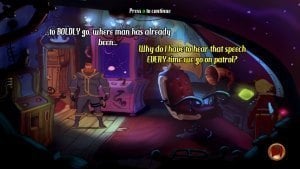 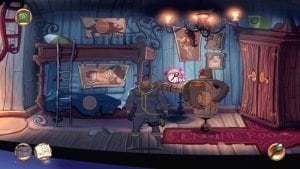 Our hero, Kaptain Brawe, has traveled to the vast corners of the known universe while functioning as a member of the Space Police. He stumbles around haphazardly, using luck and a small amount of skill, as he takes on the weighted mysteries of police detective work. He is accompanied by his side-kick, Ensign Kralek, a smart-remarking young man who enjoys reminding Kaptain Brawe just how inferior his intellect actually is. Together they travel on the Star Police Ship Mazslow, a clunky old vessel that feels comically tossed together. Their task, along with their cleaning robot, Rowboat, is to rescue the survivors of a downed spaceship, which just so happened to crash upon a pleasure planet known as Jama Spacea. They will soon find that they are not alone in this rescue attempt, and must battle a nefarious faction of evildoers constantly striving to stay one step ahead of the Space Police.

Just like a classic point-n-click adventure game, Kaptain Brawe can be controlled via mouse inputs thanks to the OUYA touch-pad. The team behind the game has also bound all necessary movements, menus, and object selections to the controller’s d-pad, analog nubs, and buttons. As the story unfolds, players will be presented with opportunities to control different characters. Interactive elements such as the location, main menu, and the inventory screen remain constant through each characters unique side-quest. Inventory items and dialogue trees, however, will change to create unique experiences. The controlled character must interact with the environment while exhausting dialog trees from NPCs throughout each senerio. Found objects will be pulled from the inventory and merged with other items, interacted with, and used in traditional puzzle solving ways to advance the main story. For those unfamiliar with point-n-click puzzle solving, a hint feature has been added that will guide the player to the completion of the next task. Each individual task has been beautifully presented throughout detailed pre-rendered hand-drawn backgrounds. Completed by a well written sense of humor, each area of the game feels fresh, fun, and entertaining until the very end. 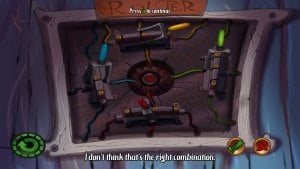 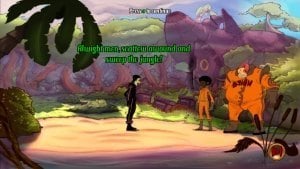 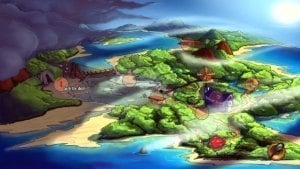 A game based on exploration and adventure needs to key in on its elements more than its mechanics. The mechanics remain incredibly simple as you move around, click on objects, and then move around again. In order to hold a gamers interest such games require excellent graphics and an honest story that can transcend commonality through humor and fun. It is these elements that Kaptain Brawe: A Brawe New World nails with Indie perfection. The entire game is made up of pre-rendered hand-drawn backgrounds that are as detailed as they are simplistic. Both interior and exterior environments feel refreshing and unique from each other. Buildings bend and stretch in a whimsical fashion that helps to shine a humorous light onto an otherwise dark plot. The story of Kaptain Brawe is told through character interactions and conversations that unfold in real time. Each character has their own personality shown through not only font color, but misspellings, bad grammar, and unique humor. Characters feel separate from each other while artistically merged into the greater storyline.

With all this retro point-n-click perfection, lively characters, wonderful settings, and creative humor, the game plays with some minor issues on the OUYA. The tutorial ends by prompting the user to “Use pinch to zoom in”, an impossible task on the OUYA. The help screen can not be closed, forcing a reboot of the game. A few in-game selection bugs require the OUYA controller touch-pad in order to advance the game. It is impossible to switch characters without utilizing the touch-pad, even though the menu is mapped to the OUYA controller. N. American localization issues cause additional confusion as key items are referenced by different names (Alcohol vs. Glass Cleaner) within the same puzzle and date formats remain UK standard (DD/MM/YYYY). 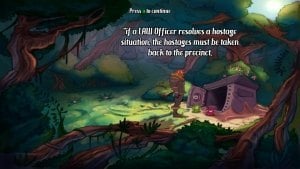 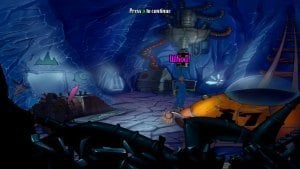 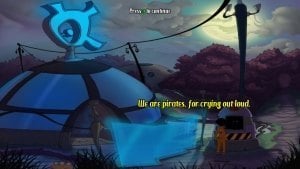 Assuming for a moment that this game was designed to require the OUYA controller touch-pad and trial and error solved localization issues, what remains is an exceptionally fun point-n-click adventure reminiscent of a bygone era of gaming. For those contemplating a purchase while remaining weary of the current bugs, the game can be fully completed without much issue. From beginning to end the story is engaging, entertaining, humorous, and well written. The graphics and sounds mix well to complete a package that feels at home on the OUYA. There are a lot of ways to reminisce through video games, Kaptain Brawe will take you on an entertaining retro adventure through tried and true gaming mechanics that are sure to make you smile.

Kaptain Brawe: A Brawe New World is an old-school point-n-click romp complete with classic style puzzles and humor that is sure to appeal to new and old gamers alike. This game will keep you filled with enjoyment until the very end. An easy 8/10, however, this score has been lowered due to the current state of the OUYA port.
Reactions: T-hug and VatoLoco
Share:
Facebook Twitter Reddit Pinterest Tumblr WhatsApp Email Share Link