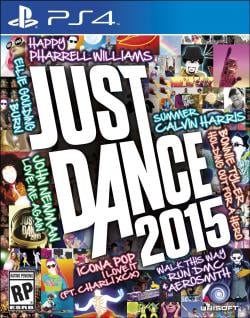 Party games have been a part of me and my friends' weekend get togethers for ages. Reviewing Just Dance 2015 was an interesting opportunity to test both single player, local co-op as well as online multiplayer in an interesting genre
Party games are always fun with friends around, but surprisingly Just Dance 2015 succeeds in making a good show for also online as well as single player gaming. A few hiccups here and there didn't affect the gaming experience as a whole, but will hopefully be addressed in future updates.

Can You Feel The Beat?

Rhythm and dance games have been a hit on consoles from the days of Dance Dance Revolution on the old PlayStation and arcades before that. Numerous arcade machines and dance mats have been beaten into oblivion, but nowadays things have progressed to a point, where game-specific hardware is not necessarily needed. At the same time the next generation of consoles have started to see a larger push with games, but it's nice to see that the previous generation also receives the multi-platform games. Ubisoft's take on the genre is the Just Dance series, which has been updated to the 2015 version with new songs and dance modes. How does the game meet the expectations of the dance hungry crowd? Will it succeed or will it burn into oblivion from the history books?

A dance game requires a method for playing and scoring the gameplay. This brings us to the input methods for Just Dance 2015. It was a pleasant surprise, when I found out I had not only one but three options to choose from. As one could guess, the first one is the PS4's Camera, which tracks the movements of the player(s) and gives scores accordingly. The Camera is the defacto method for playing, unless you want to shell out extra for separate controllers for each player. The downside of the camera is the large space requirement for playing. My living room has quite a bit of space, but I still needed to adjust the camera a few times before the game was successfully monitoring my moves. Another challenge regarding motion tracking with a camera is the situation, where multiple people happen to be playing the game and their hands and legs happen to block each other and thus not score correctly. In any case, the technology still works quite well all things considering.

The second method, the PS Move controller, is a legacy from the PS3's motion tracking technology. Contrary to the first input method of tracking the players' movement, the PSMove uses the controllers built-in gyro and accelerometer for motion tracking. I happened to have a spare Move controller available and the tracking worked, but in this time and age the camera tracking is far better value for the average dancer. The third method is your mobile phone with the Just Dance 2015 - Motion Controller App (iOS and Android compatible). This method doesn't require a PS Camera in order to play, which is a positive thing for all those gamers out there who haven't invested in the camera technology of the newest generation of consoles or just happen to have a load of friends over. Just remember to throw a wrist strap into your phone in some way or another (or alternatively be prepared to replace the screen of your smartphone when you accidentally throw the phone into a wall).

As you're getting familiar with the controls, you'll be proceeding with the game itself. Just Dance 2015 borrows quite a bit from previous releases in the series such as Dance Mashups (mixing routines from older titles with the newer routines) and alternative routines, but also adds some newer things to the mix. The menus are super fast and returning to the menu from the middle of a song doesn't take more than a second. Contrary to games like Guitar Hero or Rock Band, Just Dance 2015 doesn't have any kind of campaign or single player progress apart from getting better scores on the different songs. When you beat a song, you'll be flooded with little avatar images, but personally this didn't warrant as a proper incentive for getting a new top score. As you play the game, more options or alternative versions of the songs become available. As such, the same songs can have multiple dance routines, which can be seen both as a good and a bad thing. As you proceed to max your favourite songs, the extra options can be a blessing. The same cannot be said for the songs that you don't like that much as the alternative routines can make proceeding even harder.

Learning the dance routines can be a pain at times as some of the songs and their dance routines were completely new to me. As you play, you will only see a few moves forward and the instructions can be very vague. A slower tutorial mode would have been blessing, since the first round of playing new songs usually ended up being a video watching event. Another addition that I'd have liked to see is the possibility of playing parts of the songs in order to learn the routines. Maybe we'll see these in future versions of the game, but sadly Just Dance 2015 will most likely never see them implemented.

Another addition for the songs and dancing is the new Community Remix feature, which is actually works for Just Dance 2015. It combines videos from community into a larger collage of videos, hence the remix part of the name. Remixes are available for the songs in the game, but as one could guess, the quality depends on the source material. As I tried quite a few Community Remixes, I found that the videos could include video clips from anything between a professional level dancer, a group of people messing around and a person holding a cat doing all the moves. Yes, you'll be trying to beat a cat dancing. Luckily the moves are still shown in the lower right of the screen as the said cat really couldn't dance. Online also offers the option of competing against the online community both in real time as well as against top scores of others around the world. This can be a blessing or a pain depending on your online connection, but personally I didn't suffer from any kind of delays. As more people play the game, better scores will be achieved and no doubt someone will make the perfect score in every track sooner than later. Motivation to beat or get the same scores can add to replay value for some players.

The game suffers from a very annoying problem at times: freezing. As the game focuses on repeating the moves shown on the screen, a few seconds of freezing during gameplay every now and then during certain songs will guarantee that you will miss a move here and there. The more you play, the more this will be apparent. I first thought it was due to my PS4 running hot, but after checking the console itself, it was nowhere near as warm as I've had it go with other games. This issue really needs to be resolved for the game to be a long term party game or else it'll fade away at some point.

You Spin Me Right Round

Just Dance 2015 has an large-ish list of songs to play. As a summary, one could say the list includes quite a few popular pop songs from the 21st century, but mainly the list aims to get you moving. The pop song hits The Fox (What Does the Fox Say?) by Ylvis and Happy by Pharrell Williams will surely be instant hits with the younger crowd and perhaps even the older people too. Another hit of the past year, Let It Go from the Disney movie Frozen, makes an appearance and will surely be played over and over again with the target audience of the movie itself. If the newer songs aren't your cup of tea, Just Dance 2015 has a few interesting additions from the years before from artists such as Bonnie Tyler (Holding Out for a Hero), Run DMC & Aerosmith (Walk This Way) and Piero Umiliani (Mahna Mahna). The last song type is the party songs, such as Macarena and Tetris, made to be played mainly with friends (solo is available too). What's a party game without the party?

Modern titles have come to have DLC added to the game after the release and Just Dance 2015 is no surprise. The DLC prices vary from completely free to around $3 per song for the most expensive ones, which means getting the all the content for the game will cost you a few more moneys more than the price of just the core game. In any case, the DLC is quite strong and includes sure hits for any party such as PSY's Gangnam Style and Lady Gaga's Just Dance. While quite a few of the DLC songs have been available for Just Dance 2014, sadly you'll have to buy the songs again if you want to play them on the latest version. Thus if you don't have the previous year's title, you'll find a robust list of new songs to play.

All in all the motion tracking methods of the game work well, but they're not perfect. The Camera can track a person, but the accuracy varies quite a bit on the moves you're doing. At times I would see myself going a full circle and it would give a perfect score and at times I couldn't get the game to give me anything else except a miss for a wave of my hand. Moving the camera around helped a bit, but large space with good lighting conditions is essential for improving accuracy. The other input methods are a nice addition to the game, but as a dance game, the camera does do the most for everyone. The occasional freezing during gameplay are very annoying and should be fixed by an update as soon as possible. The game excels as a party game, but sadly you can't add your own tracks (Community Remix would be ideal for this type of add-on content!). The song list is very energizing and really gets you pumped up to dance. There is quite a bit of content available and DLC will expand your song library, but be prepared to pay a bit extra for the whole library of songs. In my opinion Just Dance 2015 is worth the purchase if you plan on playing it with friends. This way it'll be a blast and great time waster, which is a good metric for a game. The game would need more content or better challenges if it was to be made a worthy choice for single player gaming on the long run.

TL;DR: A game that excels at parties and with friends. A dance focused song list, which succeeds in lifting your body from the couch and getting jiggy with it. Buy it if you like dancing and messing around with friends. Skip it if you have last year's version.