Looking forward to a nice relaxing experience.
PSVR is a serious piece of kit for the average console owner to invest in, and with an ever-expanding range of titles to chose from: can a game about dolphins make the cut as an essential purchase in 2019?

As a devout fan of Apaloosa's 2000 Ecco the Dolphin: Defender of the Future for Dreamcast; I am a huge advocate for anything that garners a sun-soaked vibe and is flooded with dolphins. A few years back I got to swim with dolphins in Mexico and it was one of the greatest experiences of my life. They're unspeakably smart and undoubtedly majestic, but is this game anything to write home about?

Completely absorbed in the explorative elements of the game; I found myself checking every nook and cranny for secrets and hints in order to seek out new places to gawp at in awe. The ocean is your playground and there are very few limits to what you can see and do. A dazzling light-show of neon coral and sunken treasures juxtaposed with the surfaces sun-kissed beautiful skies and golden sand. This is escapism on a level I haven't enjoyed in a very long time. 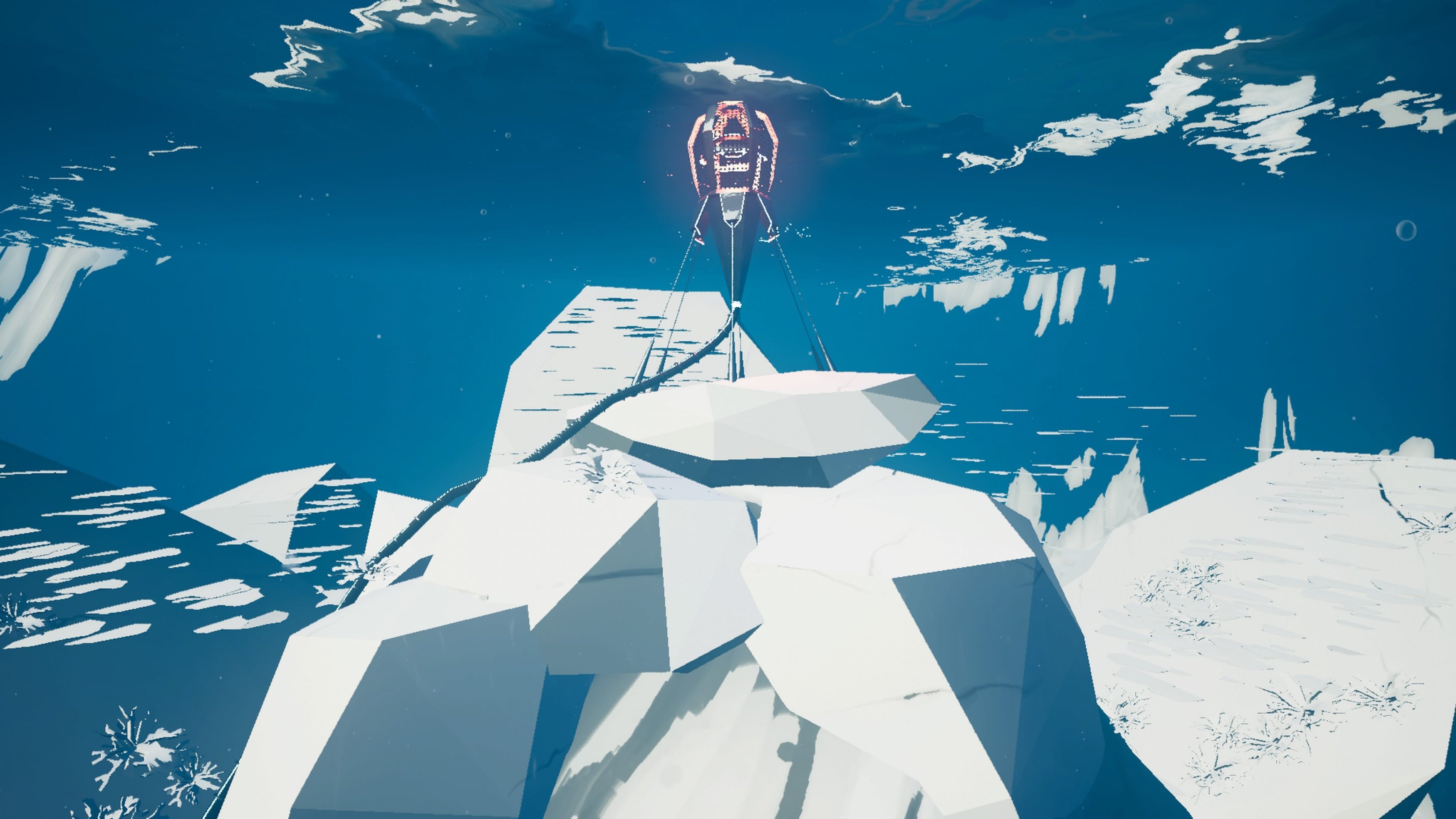 You play as one half of the duo: Jupiter, and you can control Mars's actions such as smashing boulders or disabling generators with a swift but deadly ram of his super smooth beak. I was completely engrossed, searching for the next thing to do and see. Collectables are aplenty in the pelagic expanse, with heaps of clams to find and open, revealing gold, silver, and bronze goodies depending on the level of difficulty of locating it in the first place. There are also plenty of creatures to admire and discover, some of which are interactive and can lead you to new areas and new tasks to complete, however there is no real map to speak of, just an onscreen ring indicating a vague direction to point yourself at. The lack of a map is a bittersweet point. It would be super useful to have a map that expands as you echolocate and find new locales, though a traditional map may well take away from the abundant exploration and essentially remove some of the thinking from the game. It's a quest for discovery that does require you to remember where things were in terms of points of interest or items that you don't yet have the skills unlocked for yet.

Throughout this adventure you will find that it's very much a deep rooted eco-friendly theme that ebbs and flows through the waves. Human interaction with the sea causes animals a great deal of harm via plastic waste, irresponsible fishing and toxic chemical dumping. At points it made me sad to think that this is effectively entirely preventable; if only humans were more considerate of their surroundings. We are such a destructive species and SeaLegacy and The Ocean Foundation need people to observe and act upon this plight, sooner rather than later, and expressing this through the medium of video games is a splendid education for anyone of any age or understanding. 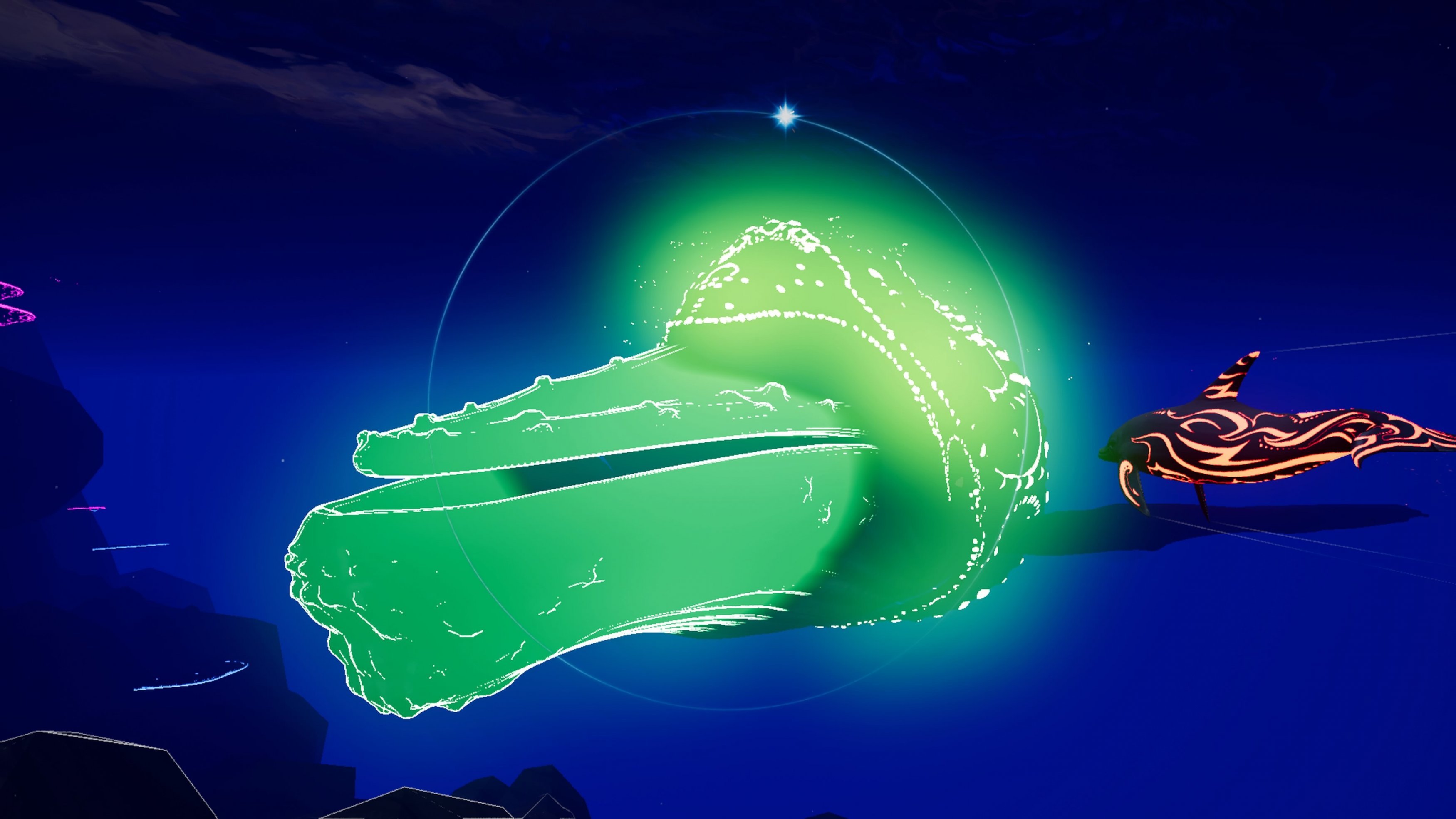 Stunning graphics that draw you in immediately, and an audio track to match: It's a chilled vibe, no danger, no worries, and pure bliss. The bioluminescent tribal markings on each animal are a very clever touch that is used to enhance and stylize each creature so you can easily recognize each one in the vastness of the ocean. Color play is critical in drawing attention to tasks and the various interactivities that are available. The sense of weightlessness is well portrayed with some hazy, bubbly filters deployed to mimic the density of water and the effect of the surface light dappling around the scenery, however a handful of the animations are slightly less-than-smooth and detract from the immersion causing you to snap back to reality. This can often be overlooked as the game's style and presence carries superbly throughout the entire encounter. The soundscape is also worth a mention here and it complements and enhances the entire experience amazingly. The whole composition flows incredibly well; with a mixture of big-beat, low-fi, and melodic tunes. The pace and tempo serve to create and balance a serene world of blissful reverie, with the reality of marine perils and endangerment. Subtle touches such as the coral reacting to your proximity and pleasantly "popping" out of the way is amazingly observed and well represented in audio form.

This game does not require any VR specific controllers or the camera, so players with a basic PSVR setup can enjoy this with a regular DualShock 4 controller without having to splash out on moves. In fact you can also play this without the PSVR headset, on your HDTV: however you do lose the majority of the immersion VR brings to the table and I would heartily recommend utilizing PSVR with this title to gain as much sensory immersion as possible and play it as it was envisioned by the developers.

Controls are akin to those of FPS crawlers like Forsaken or Descent, with a simple back/forwards motion - Triangle flips you 180 if you have gone the wrong way or wedged in a sketchy cragg. The Cross button echo locates giving the environment a vibrant swathe of electricity that highlights any items of interest or displays the terrains many facets to guide you onwards to the possible paths. The Circle button command's Mars, the dolphin of War, to use his immense porpoise-like ramming technique to unblock new routes or open closed clams. Square button emits a sonar ring with which you can clear pesky jellyfish out of your way and talk to neighborly species who have come a cropper one way or another. Inverting the Y-Axis is my pro tip, unless you're one of "those" people who plays airplane simulators where up goes up: lunatics!

The only thing seriously missing is the ability to swim faster (the game is slow and steady which is nice, but it could benefit from a little Nitrous Oxide every now and then to give it a little more pace). Though you do acquire upgrades at various intervals which allow you to dive deeper, or push through strong currents there is no ability (that I have found yet) that can double your speed. Once you have your orientation and know where you are sometimes you want to speed back to an area, but your speed of movement is akin to only being able to walk through the entirety of a game like GTA or RDR, there is no run button.

Ecco the Dolphin: Defender of the Future had another great feature and that was to walk on water by doing a surface bob followed by hammering the swim button. For me that was the showboat maneuver to impress everyone in the early 2000's, and this game is sadly missing these subtle touches to add a little flair and truly elevate it to that next level.

A beautiful game that can be enjoyed with or without PSVR: this title lacks a few game staples in favor of delivering a more vicarious sensory experience rather than a traditional game.