It Takes Two, the latest title from Oscars-flipping game director Josef Fares, is out now. Is it a flippin’ good time?

Cody and May’s marriage is undergoing a rough patch. Following increasing work stress and a multitude of adult life pressures that are affecting their relationship, they have decided to seek divorce. But stuck in between those woes is the couple’s young daughter, Rose. The news is a major emotional blow to the child, who only wishes for the parents to reunite. As she makes this wish to Dr. Hakim’s book of love, her eyes well up and tears start to roll down her cheeks and fall on the two dolls she is holding.

Unbeknownst to Rose, this act triggers Dr. Hakim’s magical spell and transports her parents’ consciousness to her dolls. Dr. Hakim, author of an apparent best-selling book of love (and a talking book himself), tells the couple that he will honor Rose’s wish and will fix their relationship before letting them regain their human bodies. For this, he puts them through a series of ordeals that will require their cooperation to surmount; all in order to help them rediscover what a great pair they can be together.

These ordeals will force them to work together as they travel to different locations within their house and its surroundings as miniature dolls. During the process, they’ll meet other household items that come to life; some of which offer a helping hand while others aren't so friendly. And things keep on getting weirder as the story progresses, which gives it a flair of Toy Story while packing its own originality. 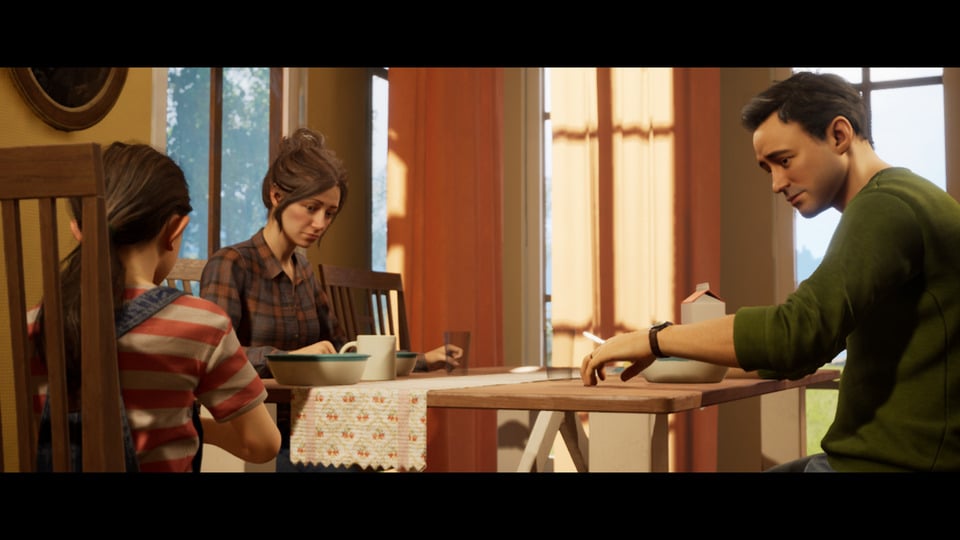 Apologies for the image quality, I've had to resize the screenshots as EA Origin doesn't have a screenshot feature while NVIDIA's option takes MB-big pictures

In line with developer Hazelight’s previous game, A Way Out, their new title is also fully co-op. From start to finish, you will need to play in couch or online co-op as each player takes control of either Cody or May while the game runs in split-screen. For online co-op, only one person needs to own the full game and the other player can use Friend's Pass (on EA Origin) and jump in the game for its whole duration via an invite. This is how I played it with my brother while we were both on two separate continents with a 6-hour time difference. Communication might be a little challenging this way, especially if you are playing on PC like we did, as there’s no means to communicate in-game. But we kept in touch via Telegram on our phones and also sometimes communicated by making our characters jump like crazy to attract each other’s attention. Communication is key in It Takes Two as the puzzles often have mechanics you need to discuss in order to successfully execute.

For example, during an early boss fight, we were facing an angry toolbox. At one point, it was repeatedly slapping its arm on the platform we were at and momentarily staying still. I, controlling May who had at her disposal a hammer head, figured that I should hit it to deal damage to the boss. But after several such sequences, the toolbox seemed to keep going on loop, without taking any damage. That’s when I realized that Cody, controlled by my brother, had his role to play too. I figured that when the toolbox’s arm is staying still on the platform, Cody should jump on it and May should hammer it to send Cody flying up. Following this epiphany, I paused the game, texted this possible solution to my brother over on Telegram, we tested it, and… Bingo! This was indeed the way forward! Hitting the arm while Cody was on it led to Cody flying up where he could use his special ability, shooting nails, to damage the boss. 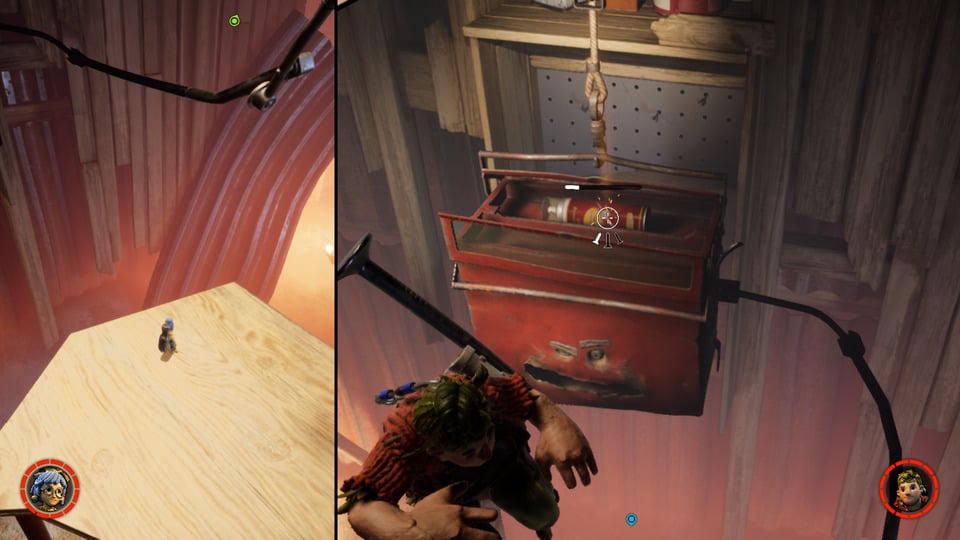 It Takes Two is filled with such instances across its 9 areas that vary from a dusty shed to outer space. I won’t spoil them as it’s best to experience them by yourself (and there’s also a lot) but Hazelight did a great job by keeping not only the locations fresh but also innovating with the mechanics. You won’t only be pushing and pulling stuff in tandem, as in each area, Cody and May receive a special item or ability (they don’t have access to the one from the previous level) that they will use in inventive ways to progress. With the hammer and nail level, Cody can fire nails for May to jump or swing on with her hammer head so that she can move ahead. May can in turn hit levers to create bridges for Cody to join her or smash bottles blocking their way. In this way, each level brings a new original ability for the couple designed around the area, and the game will still surprise you in more ways than one regarding how you’ll put them to use.

You see, Hazelight brilliantly and unexpectedly mixed genres in what appears to be a co-op puzzle platformer at first glance. You’ll find in It Takes Two shooting, rail grinding and even RPG battle gameplay elements, but for relatively short sessions as the game keeps throwing new mechanics to keep things from ever turning stale. I’d really like to see if anyone takes up Josef Fares’ on his offer to give $1000 to anyone who finds the game boring because if there’s one thing that It Takes Two isn’t, it’s boring.

Those co-op puzzles and mechanics are ingeniously crafted by turning regular household items into weapons for the couple, bosses seeking payback for being mistreated by human Cody and May, or simply serving as platforming areas in the environment. These aren’t only made for clever sequences but also for truly fun and sometimes hilarious scenes like using a tree fungus as a trampoline or riding on electric wires while avoiding sparks so as not to get electrocuted.

Players can further mix things up by swapping characters in each level or going through another run with different characters from start to finish. For those more curious to explore the world of It Takes Two, you will be rewarded with hidden mini-games and Easter eggs (including Josef Fares’ iconic statement about the Oscars!). Each mini-game, scattered throughout the game world, is also unique and pits the players against each other for some fun competition with the likes of whack-a-mole and chess. 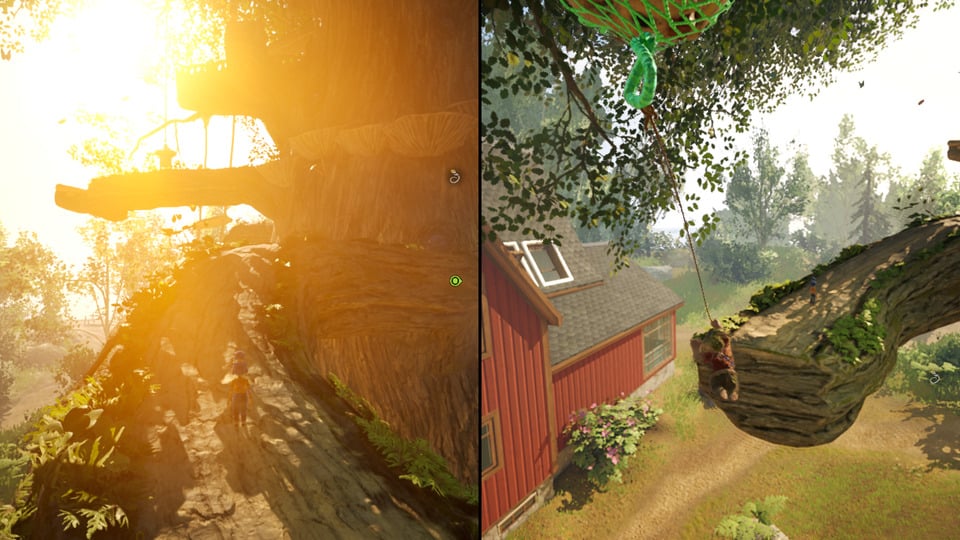 However, some clues regarding progression in the main game might not be too obvious from the get-go and if one of the players identifies a way forward, they will require communication to progress. This is why Josef Fares recommends playing the game with someone you know as it will be easy to progress this way. This is really the only "challenge" in this game as you just need to figure out what clicks to proceed as you even have infinite respawns. Thankfully, the characters also chime in sometimes regarding how you might need to proceed. Nevertheless, headscratchers are integral to puzzle games and Hazelight doesn’t go overboard with confusing gameplay like Genesis Noir does.

That said, it can be challenging to sync up times to play together with someone you know, who wants and has time to play the game, and has the same platform as you do (It Takes Two supports cross-gen but not cross-platform play). So it might help some people to be able to pair with someone else online but this will understandably impact the gameplay experience.

Story-wise, even if It Takes Two has a melancholic plot from the outset, it changes to a much light-hearted tone for practically the rest of the game in line with its rom-com aspirations. This helps make the game fun to sit down with but it leaves some of the major story beats underexplored as it focuses on the gameplay. Cody and May’s differences leading to their decision to separate are condensed into arguments over each other’s actions, while Rose’s character and emotions aren’t fully fleshed out and she is mostly relegated to serve as the game’s beacon.

This approach isn’t bad per se but the game could have told a more impactful story exploring themes like parenthood and divorce that are not too commonly explored in games. The developers favored having a good time with the gameplay over diving deeper into the plot and it still works. In fact, part of the story and the emotions are shared through the gameplay itself but it might not be that obvious from the get-go but Hazelight did manage to innovate in this way. 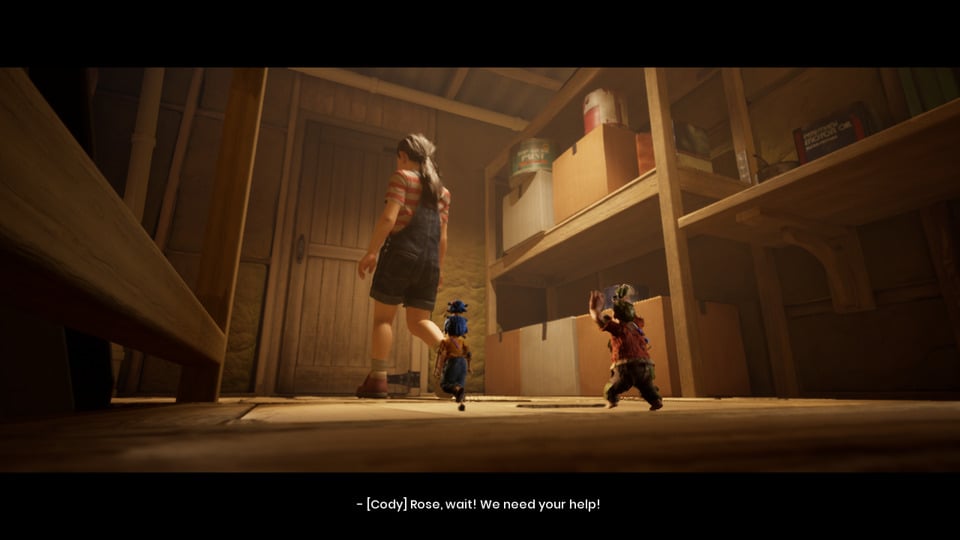 In essence, It Takes Two is a feel-good co-op puzzle platformer that constantly needs you to adapt to new abilities and gameplay mechanics across every single level in a fun and inventive fashion that indeed delivers a flippin' good time. This really helps bonding between the two players in ways that aren't really common with modern games, and this helps make It Takes Two one of this year’s (and likely beyond) most memorable games.