Official Review: Is It Wrong to Try to Pick Up Girls in a Dungeon? Familia Myth Infinite Combate (Nintendo Switch) 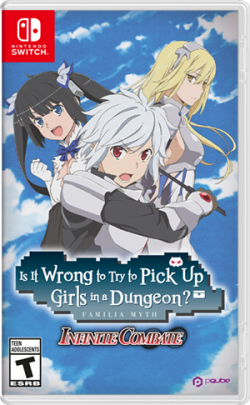 Is it Wrong to Try to Pick Up Girls in a Dungeon? Well hopefully we will find out in this rather bizarrely named game. Join me as we enter a world of gods, adventure and scantily clad women.

​
I feel I should start by saying I knew absolutely nothing about this game or indeed the manga series it is based on. By doing a little research I have discovered it started out life as a novel and as is the way in Japan, it was then adapted into a hugely popular manga and anime series. 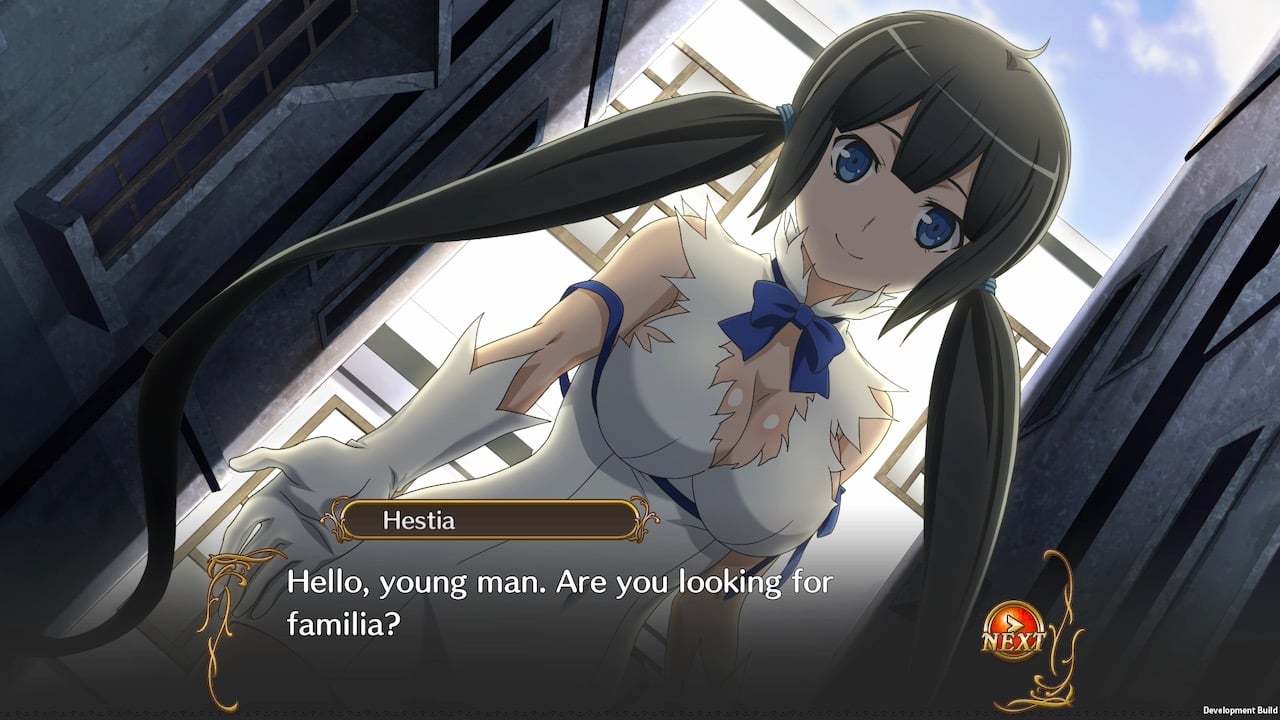 ​
The game starts out with a fairly basic narrative of how the gods of the world Orario have become bored and how they have decided to challenge themselves by living amongst the humans, they do this by having their own Familia. Or in other words, a family of humans for them to set challenges for in the games Dungeon. It is at this point we are introduced to the first of the games two main protagonists.

Bell Cranel is a young naive boy who is just starting out his life as a dungeon explorer. He starts the game as the only member of the Hestia Familia. 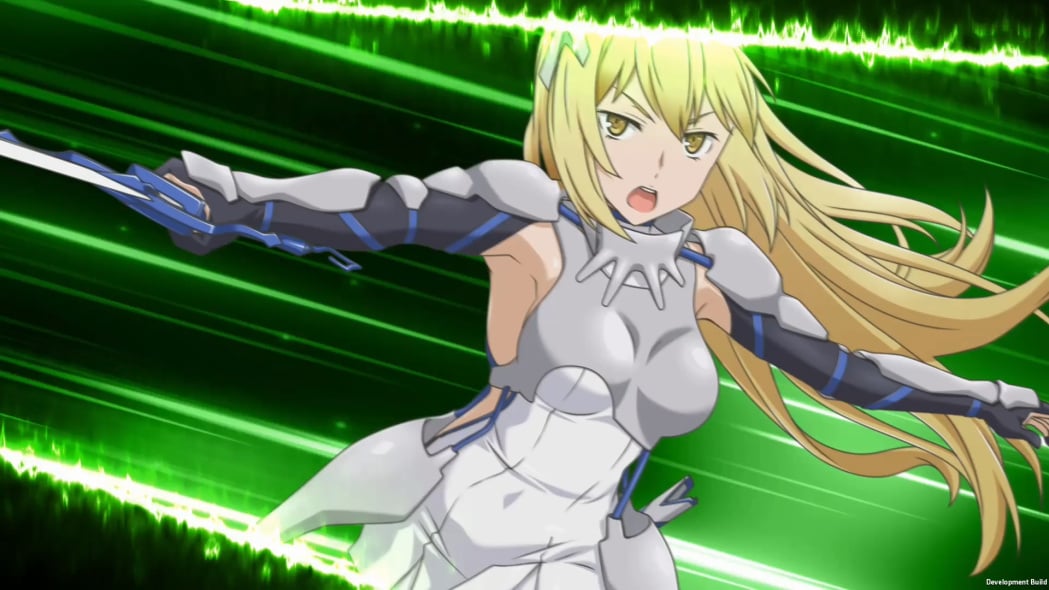 ​
Not long into the game, he finds himself confronted by a boss who is way too powerful for poor Bell to beat. At this point, we meet the game's second protagonist, Aiz Wallenstein, a first-class swordswoman and soon-to-be the love interest of Bell who comes to his rescue. Ais is part of the Loki Familia and has many companions who help her during the game. 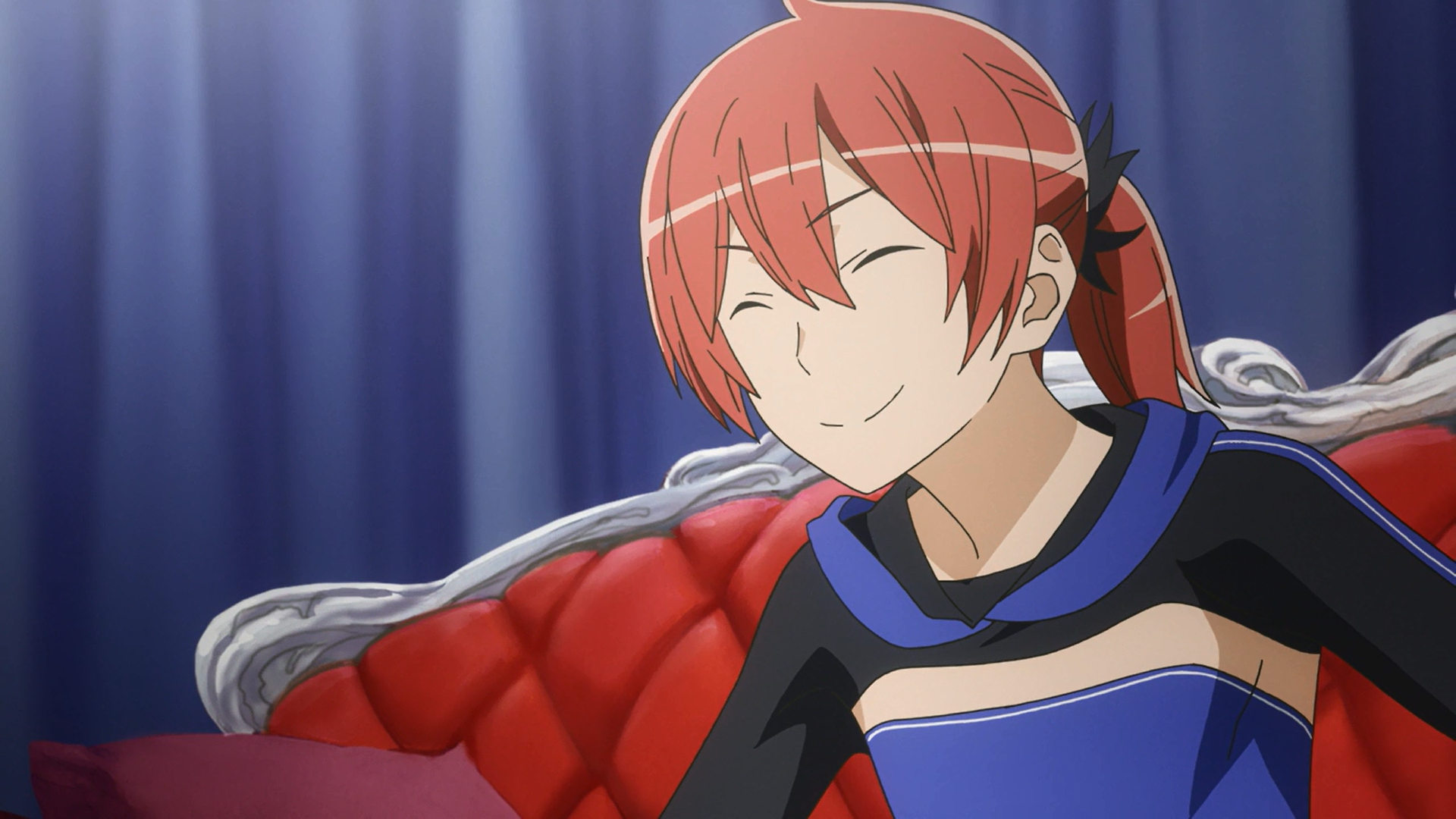 ​
Now, I don't want to talk too much about the story as to not spoil it for anyone who intends to play the game, since the story is a huge part of the game. One thing I would say is, you might want to avoid playing this game in public due to some of the content; especially the shower scene featuring one of the female characters in the nude and her gravity-defying bosom. 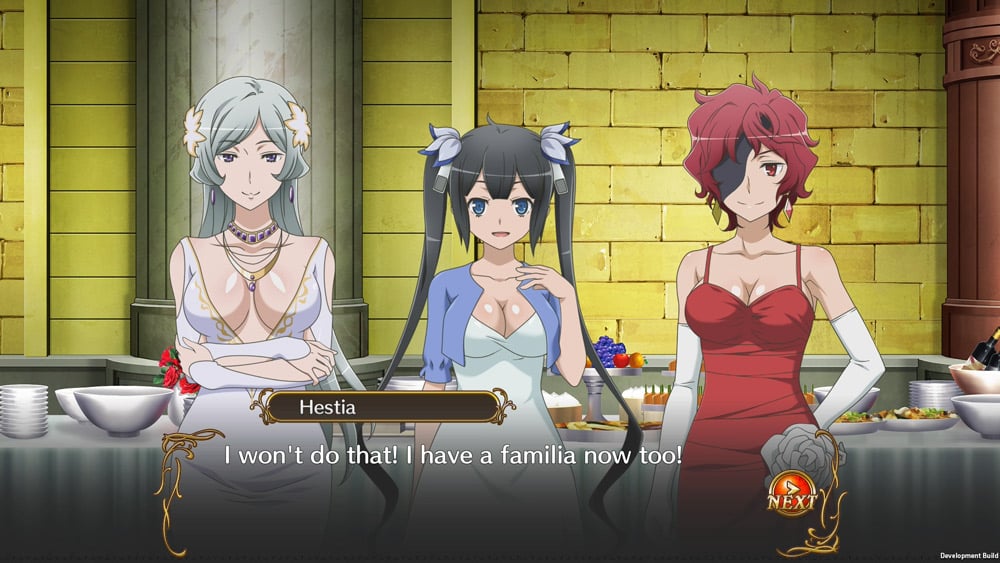 ​
From screenshots of the game, it's hard to tell what style of game this is. Well, it's basically 60% graphic novel and 40% dungeon crawler. The game is divided into chapters and each chapter has two parts. The two parts tell the same story but are seen from the differing perspective of Bell and Aiz. Part one is always Bell and Part two Aiz.

Each part of the chapter starts with the story being told by way of a graphic novel lasting anything from 1 to 10 minutes on average. You are then given a mission and then it's off to the Dungeon. The missions are always along the line of kill ten of this type of enemy or find the hidden treasure etc nothing too taxing. Some missions also have some added things to worry about such as time-limits, Or you can't use magic and so on.

Before starting a mission just like pretty much every dungeon crawler you can buy more powerful weapons or you can improve your characters' skills using the skill tree but there is absolutely no need at all to do either. Bell a short while into the game is given Hestia’s Knife and Pyonkichi Mk-II armour which is powerful enough to see him to the end of the game and Aiz can survive the whole game pretty easily with her starting equipment. The only time you will ever need to visit the shop is to buy a health item, and even then that will be a rare occurrence as health supplies can easily be acquired from the dungeon.

Once you are in the actual dungeon your character has a weak attack which you can do 5 times in a row and a strong attack which you can only do once and then your protagonist can't move for about half a second which leaves them venerable to attack until they recover. You can dodge enemy attacks with the B button and later on you learn magic attacks. Another thing you can do is bring along up to three other members of your familia. They are not seen on screen but you can select them during a battle to appear and which point they do a hugely powerful attack. You then have to won-screen your support characters slowly recharges before you can select them again. Sadly the combat is very repetitive and every fight can be won by simply hitting the enemy a few times with a weak attack then you dodge out the way at which point the enemy will try to attack but miss then you can simply return to do a few more weak attacks and rinse and repeat. After you complete the current mission your character levels up and you get another long graphic novel story. 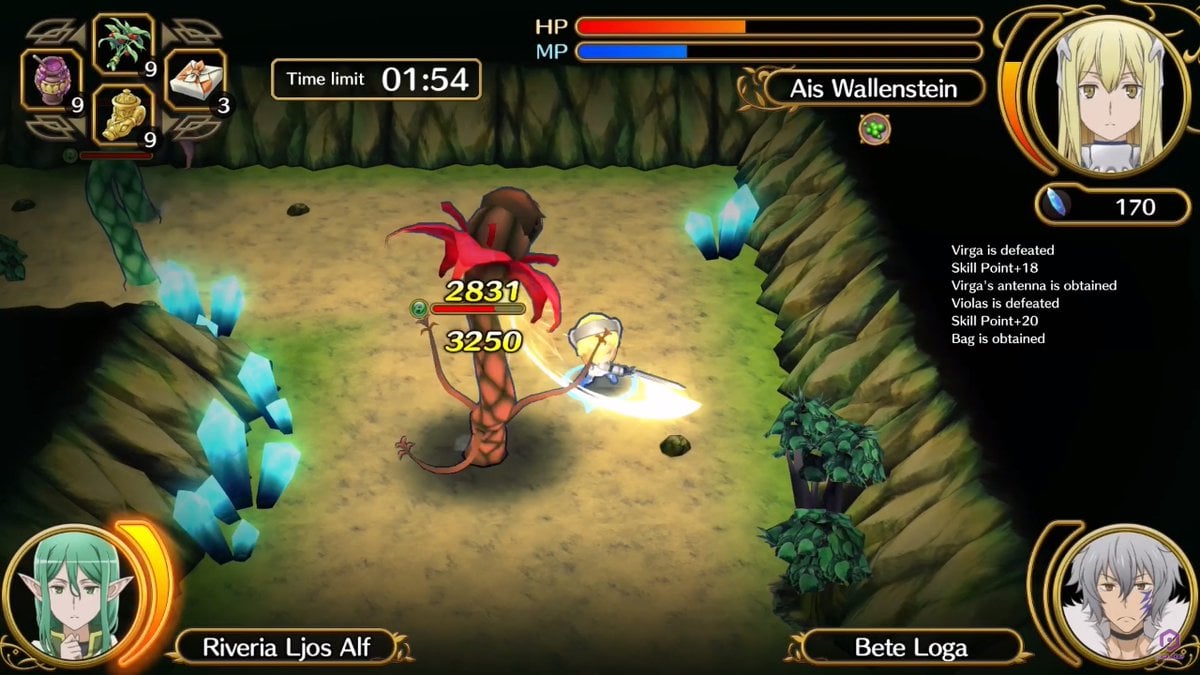 ​
One thing you will notice as soon as you start playing this game is that everything about it is very basic. Everything is done from an in-game list except obviously the dungeon sections. Weapons are bought by picking the store from the list. You then pick the weapon from the store list that next appears. There are no towns to explore. No houses to raid for items. No huge world the game's budget all menu-driven. It very much has a kind of old-school vibe to it. Similar to something like Etrian Odyssey for instance.

The only place you have any sort of freedom to explore is in It is dungeons. Even the graphics in the dungeons are very basic even if they do have a certain charm about them. Where the game does really excel is in the music and in-game speech. The opening song sung by Iguchi Yuuka is amazing and the speech even thought it's all in Japanese is done really well and each voice actor is perfectly cast for the character they portray. It definitely seems like Pcube used most of the game's budget on acquiring the licence and didn't have much left for the game. The graphics in the game are somewhat of a mixed bag. In the story sections, they are colourful and rather nice looking. It is the dungeon graphics the let the game down. They would not look out of place on a PlayStation 3 if I'm being brutally honest. 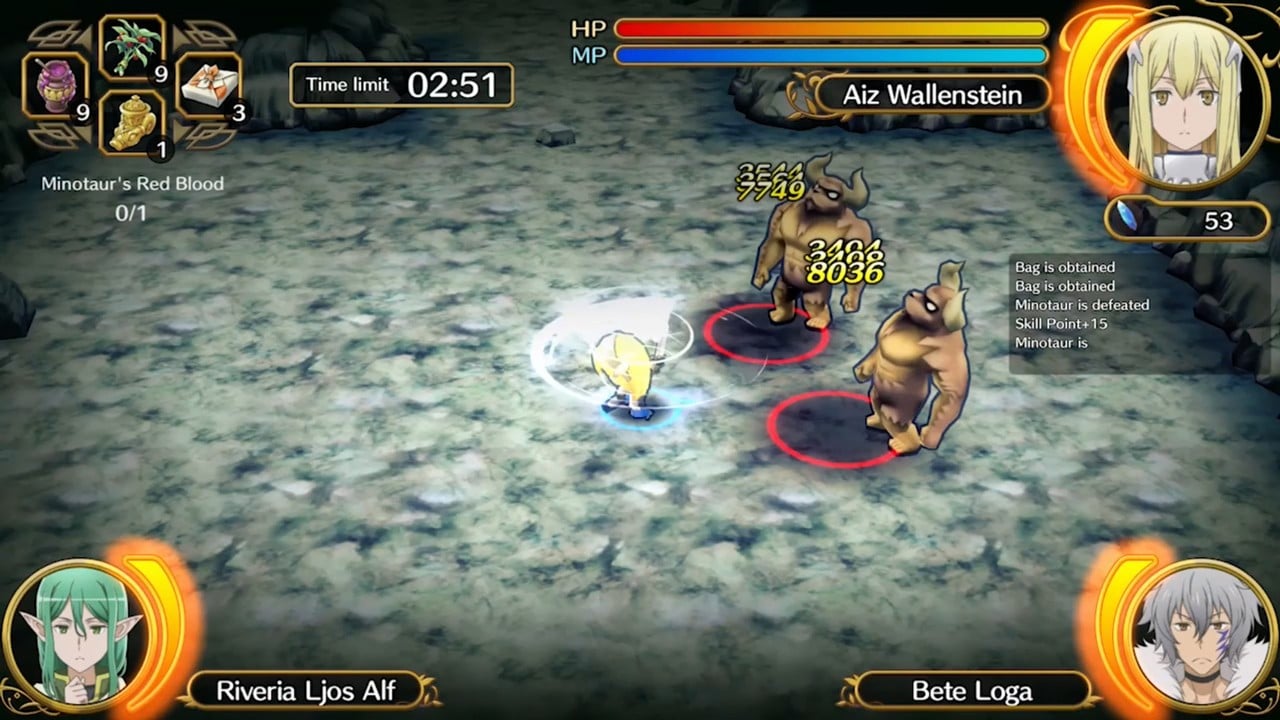 ​
Reading everything I have written above, it sounds like I didn't enjoy the game, but that is not exactly true. The story is very well explained and does a great job of introducing its various characters, lore and terminology to people like myself that knows nothing of the series. The timed missions are also exciting and add a bit of risk versus reward to the game. Do you head straight to the mission goal or do you risk failing the mission by hunting for treasure or killing some enemies for more level points for your character?

It's not exactly a bad game but nothing about it is particularly good either other than the music. Played in short sessions then there is some fun to be had, though I don't see anyone being able to play this for hours at a time without becoming extremely bored.