Insta360 brings the One R Twin Edition to market, boasting high res 360 degree recording and an "Insivible" selfie-stick. Let's see what it's all about! 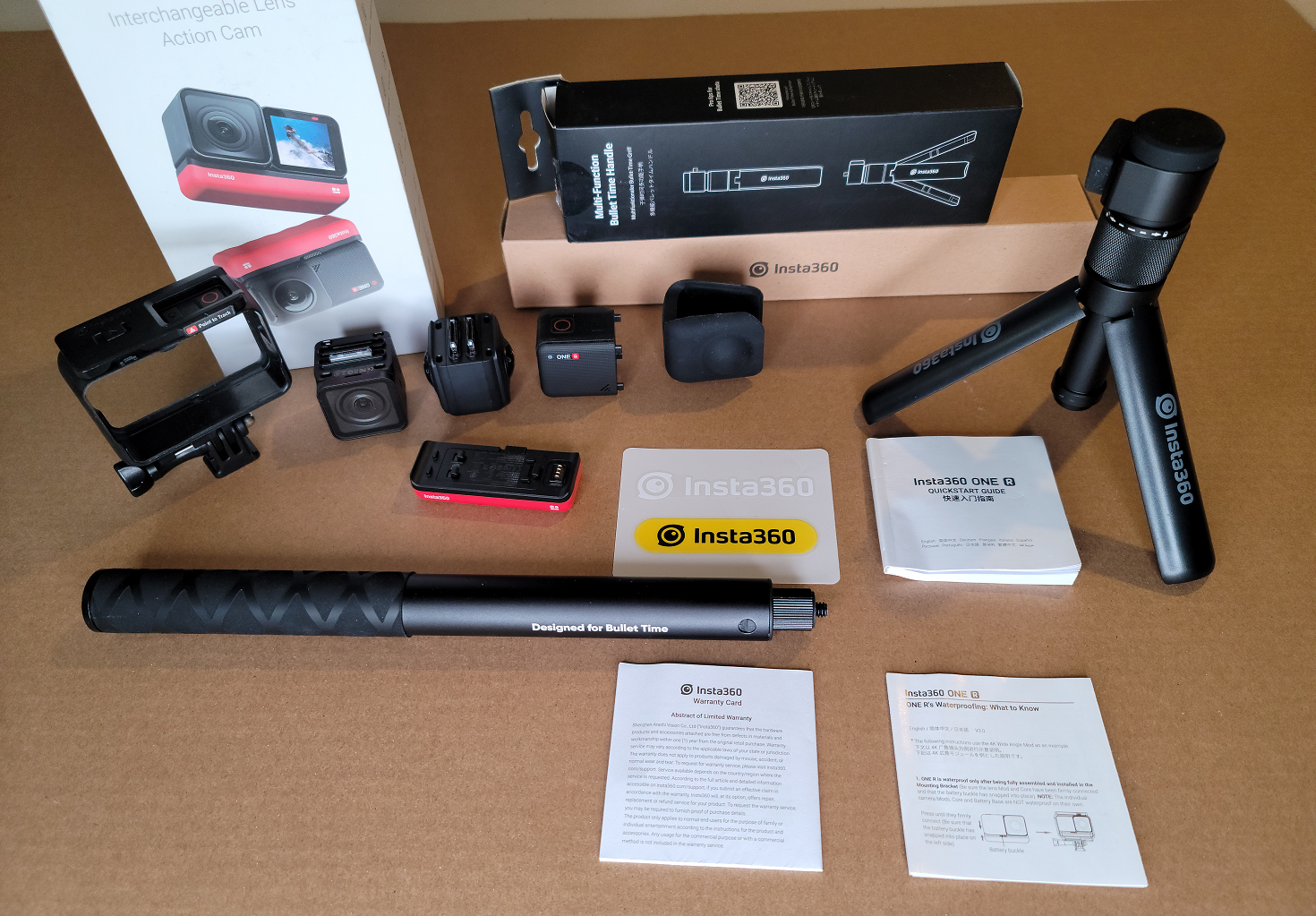 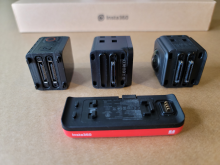 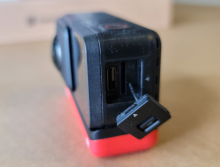 The Insta 360 One R (Twin Edition) is advertised as a portable, modular camera capable of quickly moving from a single standard lens to a 5.7k 360 degree camera. It is simply packed with the standard booklet and warranty cards, the base (which also serves as the battery pack), a control module, the standard 4k wide-angle lens, the dual-camera 360 degree module (with rubberized cover guard), and a bracket with mounting bolt to hold it all together more firmly while shooting in more intense situations.

The unit itself charges with a USB-C type connection, which can be connected to your PC and the One R as a whole can be toggled into webcam mode to be used as such. The MicroSD card slot and USB connector is housed on the main control module, which features a touch screen that is quite difficult to use since it is so small and requires swiping one of the 4 edges to navigate to any sort of menus. The touch sensitivity is fairly poor, but it can be used to view and manipulate the focus of the 360 degree camera in real time or during playback to preview your shots right from the device.

Insta360 also included the "Invisible" selfie-stick and the "Bullet Time" attachment for us to check out. While I sampled the Invisible selfie-stick, I just couldn't find a useful application for the Bullet Time attachment, because it required you to attach the camera and swing it around your head while recording. Aside from making a couple of second-long clips of flying around your stationary body just to show your mom so she can say "neat," I couldn't really figure out why anyone would want to use it, so I opted to leave that out of the review... but also because I didn't want people to see me whack myself in the head with a $500 action cam.

The One R At Work 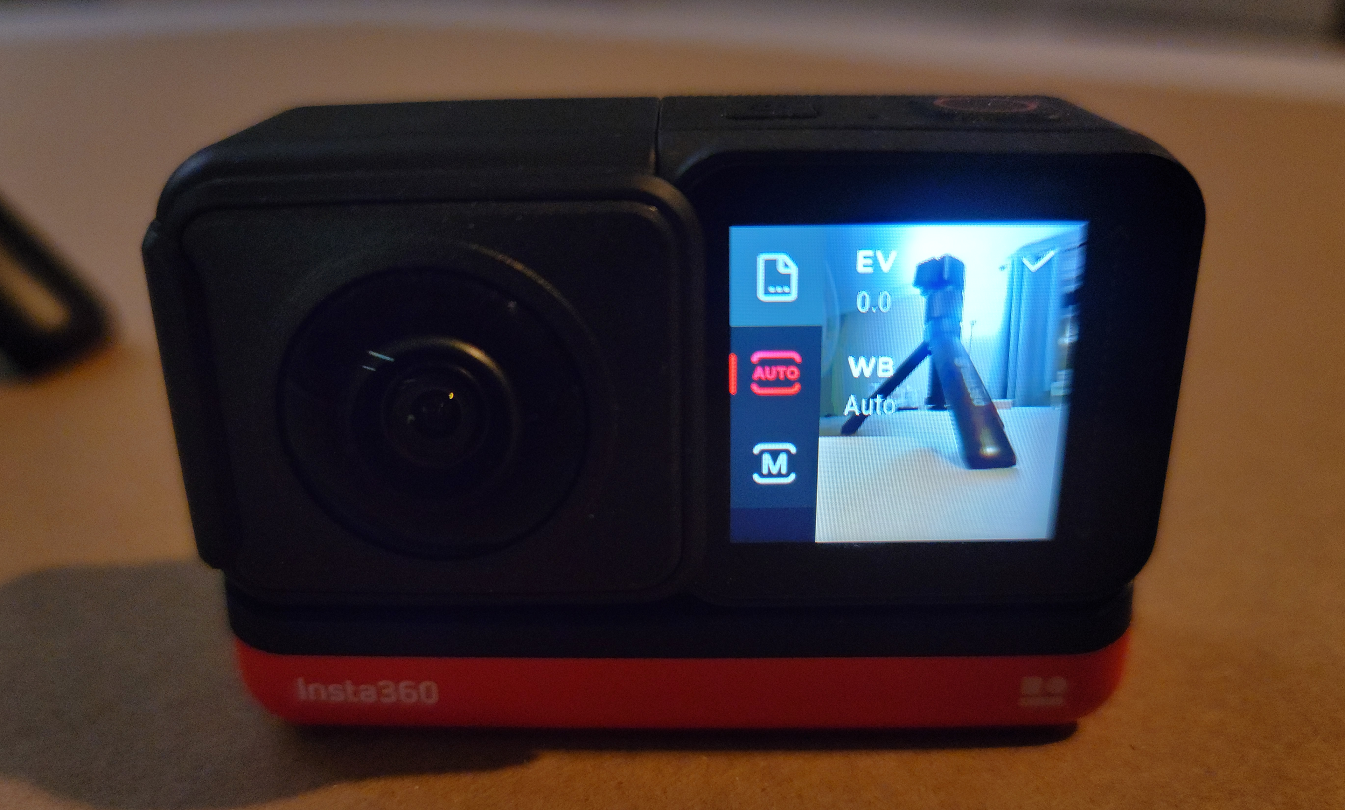 The camera itself has an internal sound source that sounds like hot garbage. The power-on chime is high-pitched and crackles badly on what I can only assume is a cheaply made speaker. Pressing the Sleep button, power options, photo, or trying to wake it up all make a digital photo-shutter sound. This was incredibly confusing at first because I thought I was accidentally taking pictures while experimenting with the buttons and menus. Why would you make almost every interactive function audio feedback be a photo-taking sound? I feel like they could have sourced some free sound bytes online and put in literally any other sound so you were sure you were actually taking photos and not hitting some other button while in use.

The smartphone software connects locally to the camera but delivers an extremely sub-par image that has major compression and a noticeable input lag when used to control the 360 FOV focus. Twice when trying to use the software to trigger the camera while it was above my car, it lost connection. Upon investigation, I noticed that the camera had hard frozen on the frame it was showing when I had hit the record button. Holding down the power button didn't seem to work, so I had to completely disassemble the unit from the mounting frame and remove the modules from the battery base to get it to power off, then reconnect it all before I could attempt to film again. The software reported after a minute that the connection was lost, but never froze itself. I had one other crash while attempting to make a test clip in 360 mode, but it may have been because I had the software open, but didn't press the button to connect them, so I can't be sure. Three hard crashes in less than two hours is hardly ideal.

The regular wide-angle camera photos are good, though to be honest it's not what you'll be reaching for when you use this type of device; Most cell phones can produce equal, if not better, images. Everyone is here for the 360 recording. I popped in a 256GB MicroSD card into the slot and was amazed to find the expected recording time as reported by the camera readout was only about an hour and a half. True to word, a single 360 video of about 15 minutes was nearly 30GB in size. It seems to store everything in a proprietary format that has little to no compression on it, so transferring your videos around takes quite a while, as does the initial rendering output. Normally this wouldn't be an issue and some may even find the raw video an attractive feature, however after spending about 20 minutes setting it up, and 35-45 minutes of recording sample footage and then my mountain run, the battery was almost completely drained. The minuscule battery in the base just couldn't keep up and falls incredibly short, leaving me to wonder why they would build such a device that would require charging almost hourly to be of any use. It seems like the battery would run out long before you could ever record an hour and a half of footage.

Putting It All Together

The included software does a fantastic job of letting you employ all kinds of gimmicky effects on your recorded antics. It allows you to select an object or person to track and, impressively, will pan around the 360 degree video and keep them in focus. You can also set animation keyframes to go from standard view to "Tiny Planet" view in a smooth transition that looks eye-catching and professional with just a couple of clicks. What it does not do is more important, though. You can't mute the audio or add in music, create fade-ins or other effects, mix two visuals together or even cut multiple clips together. This means you will have to rely on a third party video editor to get any kind of production quality out of your videos.

The One R shoots 360 footage at 5.7k resolution, which is visually stunning but leads to many complications if you plan on doing anything except uploading the raw video footage directly. While this is acceptable, my 15 minute shoot (shown below) took up around 30 gigabytes (!!!), which would take quite some time to upload on a standard home connection. The One R shot one 15GB file for each camera lens, which the Insta360 software meshed together into the large 30GB output file that I was then able to import into Vegas for proper video editing.

As it turns out, most video editing software does not support custom resolutions between 4k and 8k. Some software suites have fiddly plugins (Created by the Insta360 parent company) or tricks you can use, but it seems like the major players just don't support gimmicky capture modes and therefore can't be bothered to develop this feature. What this means is that you will need to upscale your content to either 8k or downscale it to 4k, neither of which maintain the native ratio. I chose the latter, which ended up breaking the aspect ratio and created some warping and a black spots at the top and bottom of the frame where it attempted to wrap the black bars into a spherical shape. Natively, the "invisible" selfie stick effect works very well, but re-scaling totally boogers up your final results. In the end, the rendered output went from 30 gigs down to 2 gigs. Whew! You can check it out here:

Note that this video was downscaled to 4k since Vegas and similar video editors did not support custom resolutions between 4k and 8k. The black circles at the top and bottom of the FoV are a result of this downscaling. Please use a supported browser or native YouTube app so you can Pan & Scan while watching the video.

What seems on paper like a really cool and high-end sports/action-cam really just turns out to be an expensive and high maintenance toy. A lot of time and dedication has to be put into shooting and editing 360 degree footage for very little payoff. The market, as it is currently, consumes little to no surround content, and I would even go so far as to ask you, the reader: When was the last time you watched something in a pan & scan format? Overall, I can't really recommend the One R because of the price point and the constant troubles that plague it which would only detract from your activities as you struggle to fix it or find an outlet to recharge it. 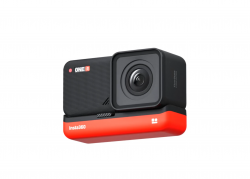