Single player
Local Multiplayer
Online Multiplayer
Co-operative
Can Square's latest RPG stand as both a homage to the JRPG greats as well as a fresh, engaging experience?

From the very start, Setsuna aimed to be a spiritual successor to the great JRPGs of the past. Everything from its battle mechanics to its piano medleys to its simple aesthetic screams Chrono Trigger, Final Fantasy, and Secret of Mana. Fortunately, it relies on none of these too heavily, but rather takes hints from each without overdrawing. The active time battle system draws together these inspirational elements, keeping the battles intense while still following the tried and true path of RPG combat.

Even the story is reminiscent of the role-playing giants Setsuna stands in front of. The dialogue, design, and demeanor of both the main characters and the enemies reflect a golden era of each of those traits. Impressively, the title's heroes feel legitimate and real throughout their struggle, with few moments breaking the immersive atmosphere. 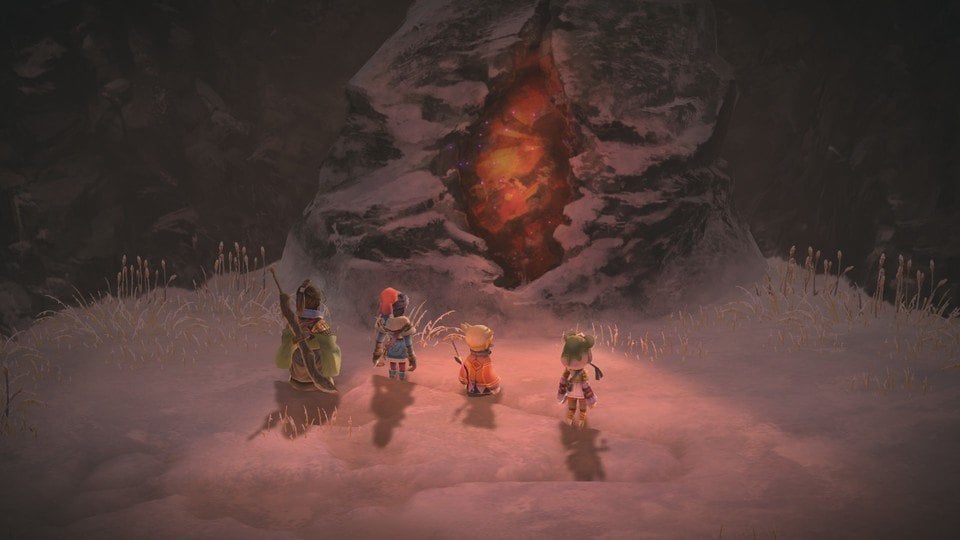 Occasionally, the player runs into shoehorned mechanics based on limitations of past hardware, which only serve as annoyances in a modern title. For example, the frequency of save points scattered throughout the world was entirely unacceptable at points, causing hours of progress to be lost because of cheap deaths. The small size of the overworld map causes far too much linear backtracking to occur as part of the story. Sometimes the game treads the line between a homage and a fan-created adventure, however these moments are few and far between enough not to detract from the overall experience.

I Am Setsuna chooses not to step too far from classic JRPG gameplay; rather, it improves upon RPG systems already in place, making additions and changes which, most of the time, add something fresh while not being too confusing.

Admittedly, the gameplay is overwhelming at its outset. As most RPGs do, it introduces a large amount of mechanics with only a very short tutorial to explain them all. While certain NPCs offer to explain these systems again if you talk to them later on, the majority of tutorials are completely inaccessible after they are initially displayed, so read them carefully. I had trouble figuring out certain areas of combat even late into the game. But if you manage to get ahold of them the first time, the rewards are magnificent.

The Momentum system, which adds damage or certain special effects to attacks based on the active battle timer, is a good example of a fresh addition which is simple enough to be used. Each member of your party has a timer gauge which must fill up before they can perform actions; after each action, it resets and starts filling again. If you let the gauge sit at full without attacking, the Momentum meter fills up. Each filled Momentum gauge allows attacks to do more damage, and gives special abilities to certain skills. And that's about the extent of it, leaving it simple enough to understand but difficult to master. 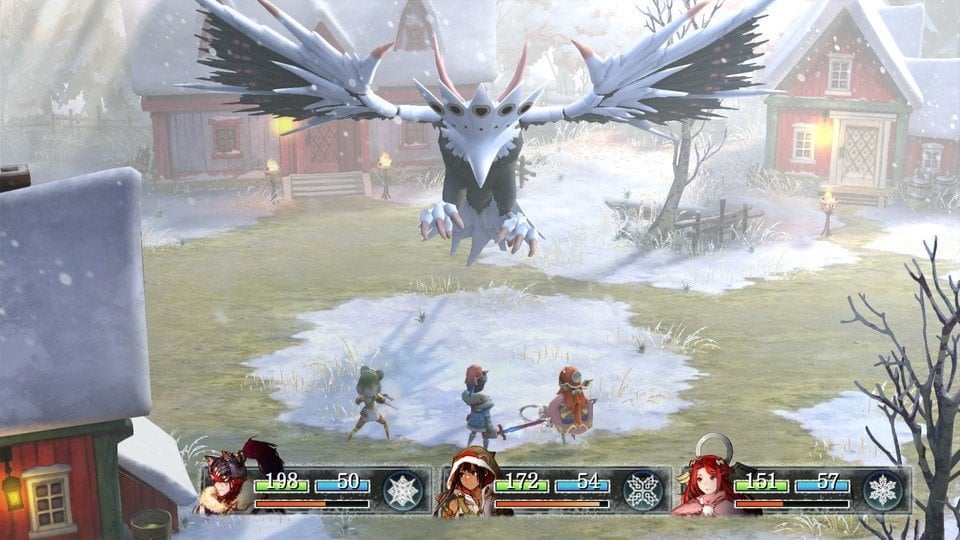 Spritnites are the other major deviance from the RPG formula. These are equippable skills which are unlocked by selling items to NPCs. Some are passive bonuses, others are active magical attacks which take place of a basic attack. The catch is, party members have to equip these Spritnites in purchasable talismans, which have a chance to activate special Flux bonuses based on the type of Spritnites equipped. It's not revolutionary, but it makes it exciting to choose skills to equip in preparation for battle.

Difficulty is the only major gameplay aspect in which Setsuna suffers; it's all over the place, making characters feel overpowered fighting random monsters and extremely underpowered when faced with a boss. Grinding levels won't get you far, either, as stats change mainly based on weapons and their respective upgrades. The only real challenge here comes from enemies that inflict status effects, or bosses that regenerate health, and even from artificial sources such as a lack of direction and save points. Strangely, Setsuna never manages to match the balanced difficulty of its ancestors, and straddles the line between a grindfest and an absolute breeze. Other than these issues, the title makes both random encounters and bosses fun to watch and plan for regardless of the difficulty required to beat each.

Presentation - A tale of sacrifice

Setsuna is a woman chosen to act as a sacrifice to quell the increasing population of monsters; our story follows Endir, a mercenary who was hired to kill her, but is spared by Setsuna herself after his failed attempt to do so. His gratitude compels him to accompany her on her journey to the Last Lands, where she must sacrifice her life to save the world. Many fellow travelers and enemies-turned-friends accompany them on their adventure, which leads them back and forth to call favors helping them traverse the monster-infested lands.

Each character has a compelling backstory, with few feeling out of place or fake in any way. Setsuna's constant desire for mercy often conflicts with the urgent need to complete the sacrificial pilgrimage, all while fighting back against countless hordes of monsters. 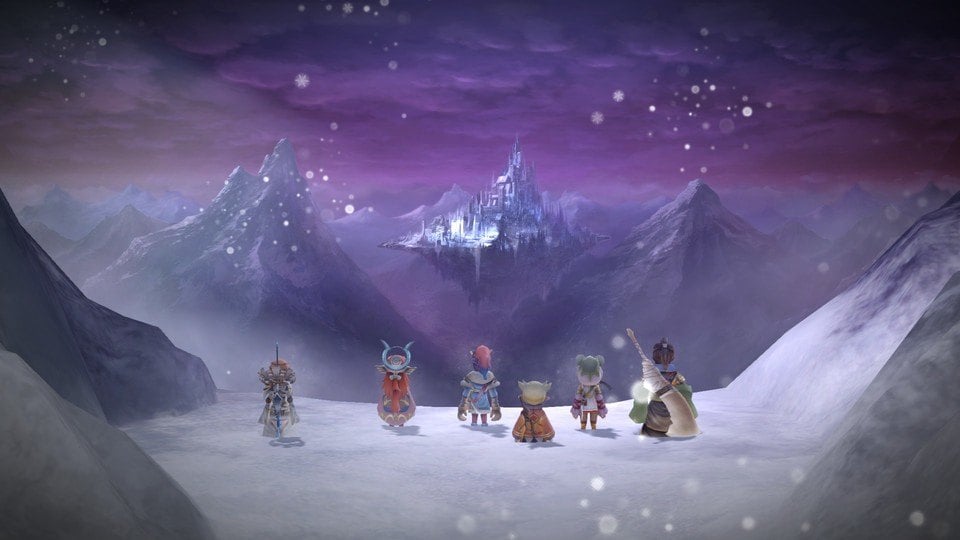 A breathtaking atmosphere envelops every aspect of the presentation, featuring snowy wastelands and fantastic character designs along the way. The cold, wintery aesthetic could not contrast better the frightening enemies at every turn. Sweeping piano melodies, though often overused, tie together the intense combat and the beautiful, smooth graphics in a way that is reminiscent of Setsuna's many inspirations. The simple graphics certainly aren't realistic but they are all unique and leave nothing to be desired.

What We Liked ...
What We Didn't Like ...
8
Gameplay
Setsuna takes inspiration from classic JRPGs without relying on their gameplay too much, as it adds enough unique features to stand as its own game. A few quality of life changes are needed but the combat provides an overall enjoyable experience.
9
Presentation
Visuals, music, and story synthesize beautifully to create a cold yet inviting atmosphere which reminds one of the great RPGs of the past.
7
Lasting Appeal
The main story is decently long at around 20 hours, however there is little to no replay value, with no side quests.
8
out of 10

Like an experienced chef with a garden of spices, I Am Setsuna borrows from classic RPGs in many areas without feeling like a fan game or a ripoff. While minor flaws detract from the experience, the brilliant presentation and nostalgic gameplay are enough to make Setsuna worthy of standing with its ancestors.
Reactions: MajinCubyan, Madridi, Bortz and 9 others
Share:
Facebook Twitter Reddit Pinterest Tumblr WhatsApp Email Share Link
Been playing myself the entire day, and I pretty much agree with the review.

Despite the cons, it's pretty enjoyable, I am not disapointed. Good review as always endo!
Reactions: MajinCubyan, Psionic Roshambo and endoverend
I was going to say it looks like a Final Fantasy rip off but then I noticed it's from Square so in a way it is lol but they are allowed anyway after reading this im more inclined to trying it, rather than just brushing it off.

Good review!
Reactions: endoverend
Well, this is my first time reading about the game. I somehow managed to avoid all the talking about it. Your review was pretty good to get a grip of the game's style and content

Well, while I am not into grinding too much, but it looks okay and I am needing some new RPGs to play, so I guess I'll give it a try when I get some money later. The story is irking me off though, the MC is going to kill herself in the end unless there is some plot twist

Anyway, great review as always, endo!
Reactions: endoverend
i am tempted to pick it up this weekend but for $40.....

BurningDesire said:
i am tempted to pick it up this weekend but for $40.....
Click to expand...

Just fucking do it.
Your review is probably the first to not critisize the snow !
All other review said "too much snow everywhere, I can't stand it anymore" and dull characters.

At least, your review is about the game mechanics and the story.
I'm also tempted to buy it, and it's short to complete the story so it's great when you don't have 100h to spend in a game
Reactions: T-hug

Cyan said:
Your review is probably the first to not critisize the snow !
All other review said "too much snow everywhere, I can't stand it anymore" and dull characters.

At least, your review is about the game mechanics and the story.
I'm also tempted to buy it, and it's short to complete the story so it's great when you don't have 100h to spend in a game
Click to expand...

Haha yeah, I kind of liked the snow aesthetic. Sure it got a little old but the game isn't that long to begin with, it's over before you know it.
20 hours is not decently long, its quite short, but I guess it would seem long with the monotonous battle system of the 90s which in no way works anymore. The only reason they ever existed is because technical limitations in animating action combat. Nostalgia is not enough to get me through a game anymore. I have the game and will give it a go though.
Lol, the game's name remind me weed girl of Fates
Just purchased this game. Looking forward to giving it a shot when I have the time.
I've been playing this game on and off but the snow and music makes me fall asleep.

@ DEMONGreninjaPG: hey kennies neo is stuck in the backroom 12 minutes ago
Chat 3