Today let's explore the HyperX SoloCast--the latest dedicated microphone by HyperX. But can you really get fantastic sound quality from a $60 mic? Let's find out!

HyperX--a Kingston Technology Company--is well known in the gaming headset industry. Recently, the company diversified into the microphone industry with the HyperX QuadCast S, which is a fully-featured standalone mic for streamers, content creators, and gamers alike. Riding off of the success of the QuadCast, HyperX released the smaller and appropriately named HyperX SoloCast. It's always important to know about the company that one is buying hardware from and the first step is to find out what the company has to say about itself. According to HyperX's website:

“HyperX is the high-performance product division of Kingston Technology, the world’s largest independent memory manufacturer. Started in 2002, HyperX began with one line of high-performance memory and has grown over the years to encompass multiple product lines of memory modules, solid-state drives, USB Flash drives, headsets and mouse pads. Featuring best-in-class components that deliver superior performance, quality and aesthetic design for more than a decade, HyperX products are the choice of top-rated gamers, tech enthusiasts, and overclockers worldwide. From setting memory world records to achieving the most stringent product certifications, HyperX is committed to delivering reliable products with the highest performance standards.”

The HyperX SoloCast is a premium microphone with a budget price of $59.99. The microphone is USB so it really is as simple as plugging and playing--something that will be welcome for people to get started with recording professional projects. Personally, I found out soon after co-hosting the Tempcast for a few episodes that none of my headset microphones were going to do the job. It wasn't until I was able to get my hands on an expensive Yeti microphone that I was proud of the quality of my audio. That's why I was so surprised to find out what happened when I switchedd from the $130 Yeti Blue to the $60 HyperX Solocast. The difference in audio quality was essentially nonexistent! In fact, my co-hosts (audiophiles themselves) were unaware that I was even recording using a microphone that cost less than half of the one that I was using prior.

The SoloCast sports rather simple packaging. The box is small, showing off HyperX's classic red and white design. Inside the box is a plastic shell that houses the microphone, removable stand, USB-C cable, and quick start guide. And when I say removable stand, I really mean it because it's extremely easy to place the microphone in and out of the stand while keeping it securely in place when you rotate it. What's particularly interesting is that the base of the microphone is able to accommodate a microphone mount with either ⅜” or ⅝” threads without the need of extra equipment. This means that the microphone will be able to fit on most standard stands and boom arms if the included stand is not to your linking.

This microphone is appropriately named the SoloCast because it only features a single cardioid pattern pick-up pattern which essentially means that it is designed to be used to record a single person speaking directly into the microphone. In the days of COVID, its smart to record podcasts from a distance, so not many people have to gather around a single microphone. As long as this mic is situated in front of your face, the audio quality will be great. The problem with cardioid pattern microphones such as this comes when you move too far away from the mic. I find myself moving around a lot while recording, which is where a boom arm would come in plenty handy since I can move the arm around with me.

This microphone doesn't take up much workspace at all, at only about seven inches tall when placed in the included stand. Further, there is a LED indicator on the mic to show whether it is recording or is muted. By default it shows a solid red light, but when you tap the mute button on the top of the microphone it will switch to a blinking red pattern. The small form factor does not have an impact on the sound quality. The easiest way to describe the audio quality is with a demonstration. Listen to the audio sample below to hear the difference between the $130 Yeti Blue and $60 HyperX Solocast.

The bottom line is that the HyperX SoloCast is an awesome and easy to use entry-level microphone. Don't let the term "entry-level" fool you--this microphone successfully allows you to produce high quality professional content without spending hundreds. Keep the microphone close to your mouth and you won't find many problems. 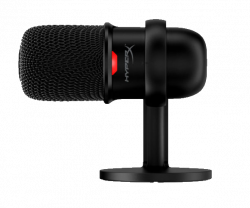