Up for review we have the HyperX Chargeplay Clutch, a 6000mah charging case for the Nintendo Switch. Advertising up to an extra 5 hours worth of play time, is the ChargePlay Clutch a good accessory for your Switch?

The ChargePlay Clutch, HyperX’s latest addition to their ChargePlay series of power accessories for game consoles, is a charging case for the Nintendo Switch that features a 6000mah battery, detachable Joy-Con grips, and a large, adjustable kickstand for tabletop gaming. With an MSRP of $59.99, is the ChargePlay Clutch going to be your go-to Switch accessory? 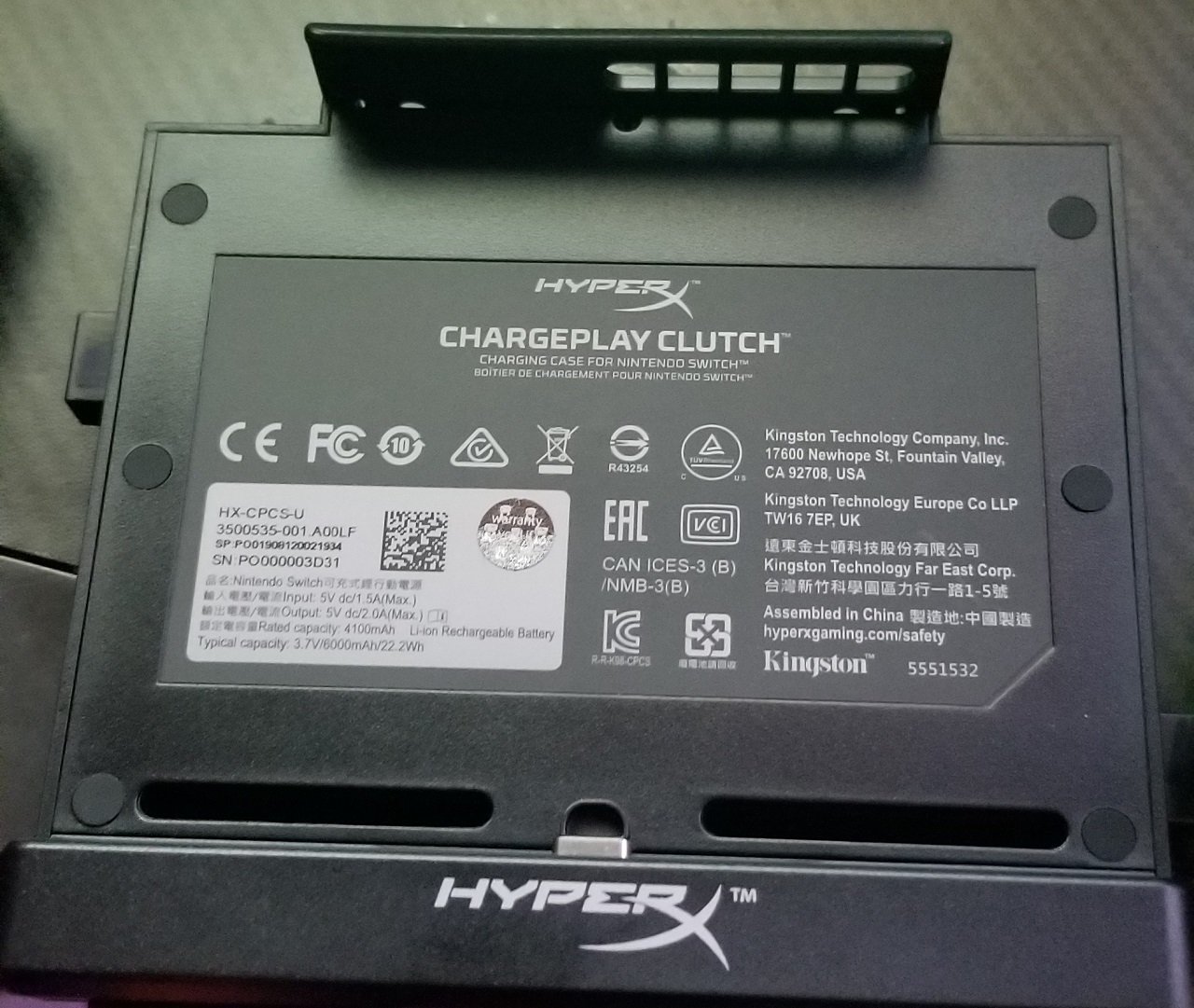 First things first: opening that deceptively small box. You’ll find the base for the case all nice and packaged up, the Joy-Con grips, a quickstart guide, and a 6-foot USB-C cable for charging the battery pack. Not a lot, but that’s never a bad thing. Pulling the case out of the box, the very first thing you’ll notice is just how dang big and heavy this thing actually is; coming in at a whopping 400g, or approximately 0.8lbs, you’ll find the ChargePlay Clutch weighs just as much as a stock Switch model does, (with Joy-Cons attached), and wow, is that awful. When this thing is attached to your Switch, and you have the Joy-Con grips attached, you’re basically holding two Switches in your hand, making what was already a "barely portable" handheld system into a chunky ~2lb weight. Which doesn't seem like much at first, but after holding the thing up for a couple of hours you really start to feel that 2lb weight just sag your soul.

This thing's bulkiness really only seems usable for long periods in tabletop mode, which it does quite well! The base of it is pretty flat, so you can simply sit it on the table as is, or use the fairly adjustable kickstand to angle it up however you like. The Switch docks into the Clutch in much the same way as the Switch Dock; it simply slips right onto the USB-C port, and then a small plastic piece hinges down to keep it in place. Attaching the Joy-Con grips is accomplished via magnets built into little protrusions on each side of the base, which can also attach to each other to make a Joy-Con grip that’s much like the one included with the stock Switch, although a little smaller which I found to be quite uncomfortable, personally, but might feel okay to others.

So the thing is bulky and a tad unwieldy, but maybe that’s worth it for the extra battery! ...well, maybe not. As noted above, the ChargePlay Clutch only has a 6,000mah battery in it, which will seem like a good bit more, compared to the Switch’s internal 4,310mah battery, but in reality, it isn’t exactly that much extra capacity when you compare it to the previously reviewed Venom Power Pack and Gulikit Detachable Power Bank, both of which offer over double the capacity with 10,000mah batteries.

HyperX advertises this 6,000mah battery as offering up to 5 hours of additional playtime on your Switch, which in practice will really just depend on what you’re doing. While playing some less intensive games, like Stardew Valley or HONK HONK, I found that to be close enough to the truth; I got around an extra 4-4.5 hours worth of playtime, but more intensive games like The Witcher 3 or Spyro: Reignited I got maybe an extra 3 hours-ish. Which, don’t get me wrong, is still a pretty good boost in playtime vs. the Switch’s relatively low battery life! Until you look at the price, which comes in at a whopping $59.99 USD, and for you UK/Europeans out there, it's an even worse £54.99 GBP/69,99€ (aka ~$71 USD), which quite frankly is a ridiculous price when compared to the competition.