That's right, we're looking at another mechanical keyboard! In this review, we've got our hands on the Hexgears Impulse, a rather interesting piece of hardware that has both utility and style. Boasting spill-proof pudding keycaps, this one is definitely worth a look.

In the wild world of mechanical keyboards, you have a lot of brands, all with varying specs, looks, and attributes. There's a near-endless amount of keyboards out there, like budget ones that are affordable, niche keyboards that have special layouts, fancy types that have tons of features, and so on and so forth. Continuing on in our hardware adventures, we've come across a relatively new company: Hexgears. In the recent past, they've released a handful of keyboards prior to this, thanks in part to crowdfunding, making a name for themselves in the industry as a quality rookie manufacturer. Today, we have one of their newest products: the flashy Hexgears Impulse.

Arriving in a very low-key black box, this keyboard looks fairly unassuming, at least, until you plug it in to your computer. You can get the Impulse in two different forms; either the bright RGB version, with pudding keycaps and a ring of lights, or the much more subtle black-and-white variant, which won't happen to turn your desk into a landing beacon for airplanes. Seeing as I prefer the fun of having a little party of lights on my desk, I went with the showy keyboard, though I'm certain that many will appreciate Hexgears for offering matching hardware that doesn't have those extra frills, and at a slightly reduced cost, too. Both keyboards have PBT keycaps, which are considered much more durable and premium, compared to the common ABS type.

Against other competitors in the midrange mechanical keyboard market, the Impulse has two notable features that set it apart from the others. These pudding keycaps aren't just for show, as they also have the added effect of being water resistant, which will keep the keyboard safe in case you have any incidents that would involve knocking over your drink. You shouldn't be keeping anything liquid so close to your expensive electronics, nonetheless, but it's nice to have that peace of mind, just in case. Due to the keys being mostly translucent, the lighting comes through full-force, and it's the absolute peak of achievement for any fan of extravagant RGBs. From the constantly flashing outer ring of lights to the way the keyboard glows so vibrantly, this is something that people will do a double take at when they walk by your desk.

As previously mentioned, Hexgears allows for three switch options in its builds: Kailh BOX Brown or White, and Hako Clear. All of these are very uncommon keyswitches to see on a keyboard, making the Impulse doubly unique. This is a keyboard that'll wow people with its looks, and with the way it handles. I selected the Hako Clear for my review unit as they are a special type of switch, created by a group of specialist keyboard makers called Input Club. For the sake of not going too deep into keyboard terminology, they're like Cherry MX Browns, only with more force required for actuation and louder clacks. I absolutely did not expect just how much of a difference it would make, resulting in the keyboard feeling absolutely incomparable to anything else I've ever used. I fumbled with my typing on many occasions before I acclimated to using more pressure behind each key press, which is super satisfying whenever you feel the tactile feedback for every letter you type. Since I write a lot, I began to favor the Impulse for everyday typing, as I personally preferred it to red or brown switches, and though I don't game much with a keyboard, I had to test it out for the sake of curiosity. 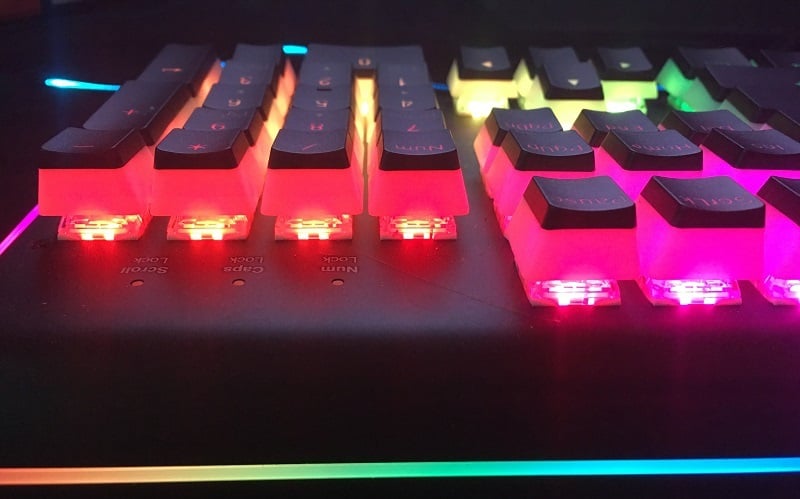 In which, playing games with it proved to be not quite as pleasurable as typing on it. These keys are well-made, and they're going to last you a very long time, but they're also significantly stiffer than typical gaming keyboards with Cherry MX Reds or Blues. You know for certain when you've pressed something, from both the feeling of travel, and the response both audibly and physically, but you might end up adding a few seconds to each in-game action when you're dedicating so much effort into pressing each key. This, however, is an issue only related to the Hako Clear switch model, which is designed with a focus on typing. The Kaihl BOX switches are much easier to press, but are unlikely to be as enjoyable to operate when typing. For people who like to make a noise through clicks and clacks, the White switches are what you want, while gamers should go for the Browns. Regardless of your choice, they're all high-quality keyboards.

I would be remiss not to further touch upon the RGB effects that this keyboard has, as it's one of the main selling points. You've got eight different lighting modes, and each of those has varying effects. By pressing FN + Pg Up or Del, you can cycle through each available scheme, ranging from single color tones, flashing rainbows, per-key lights, reactive flashes, and pulsing shades. Unlike most keyboard companies, Hexgears doesn't have dedicated software for its products, meaning you'll have to rely on those hotkeys to personalize your setup. It's not a huge problem, but it'd be nicer to just control things through a GUI. Additionally, you can set up macros, whether for gaming or for productivity, by using the hotkey combo of FN + F11. The row of keys from Y to P are available to program, which you do by pressing the aforementioned two keys, setting what you want, hitting FN + F11 again to exit, using FN + Y to enter macro mode, entering your macro, and then exiting macro mode with FN + Y. It's not at all an elegant procedure, but it certainly functions and is serviceable. 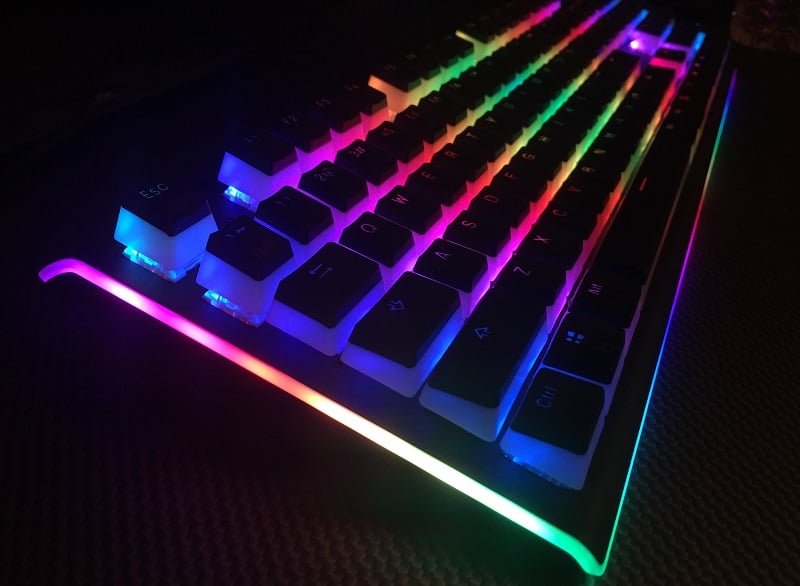 Retailing at $89.99, the Hexgears Impulse is a solid keyboard, with a premium build quality, special keycaps, and dazzling RGB effects at a very moderate cost. This is an impressive addition to anyone's setup, that'll be able to last you a long time, whether it's hardcore gaming sessions, for users that find themselves constantly writing. Those that adore colorful gaming setups and specialist-grade keyswitches will love everything that the Impulse has to offer, giving you an absolute value for the cost.

After a few weeks of using the Hexgears Impulse, it has become one of my favorite keyboards to use, for both typing and gaming. If you want your keyboard to look distinctly unique from everyone else's, then you will no doubt love the pudding keycaps on the Impulse, which make for a very comfortable, quality, and stylish product.
Reactions: CosmoCortney, Hells Malice, lordelan and 1 other person
Share:
Facebook Twitter Reddit Pinterest Tumblr WhatsApp Email Share Link
Pretty

Yes.... I can see myself losing friends due to this keyboard

Reactions: Chary
And can you imagine if this was seen 30 years ago people would think shit is tht from a ufo
sure but why do you have to review every single thing you buy?
Now take a cup of water and splash it!
Just to be sure: Hitting a key on this one is very loud, right?
(because that's what I want)
Reactions: Chary
@POHAXSF_NEW I don't. A review unit was supplied for a review.
@lordelan It's all the click clacky goodness you could hope for! Supposedly the white switches are even moreso!
Reactions: MythicalData and lordelan
If you have access to a sound level meter, I'd love to know the result when typing with it on ear level.
If you want a good rgb mech keyboard
Buy the razer huntsman

I disagree, Razor are overprised junk imho. It's better to go for Corsair or Logitech.
keyboard of lgbt epileptic dream

Is that a mechanical keyboard without an annoying "gaming" font? sweet dude

Orangy57 said:
Is that a mechanical keyboard without an annoying "gaming" font? sweet dude
Click to expand...

I just stuck gaming mechanical keyboard into the image search and had a go through all the ones of high enough res to see the keys. A handful came back with a potentially suspect font design for the keys, and a few looked like my transformers toys I had when I was a kid, but most seemed to be fairly tame as far as fonts go. Granted I did see one that was a bit hard to be "I R 90's HAXX0R" which did not help matters.
I will give though that I much prefer the basic fonts as used by standard OEM keyboards, and most of the time gaming stuff seems to be a case of user wallet too fat error rather than anything particularly useful. On the flip side if it is what it takes for mechanical keyboards being things I can reasonably get once more for vaguely sensible prices (dark times through the late 90s and early 2000s, or would have been if such keyboards had not been built like tanks and thus lasted throughout it all*) then I will take it.

*as it stands most things you have seen from me on the forums since mid 2016 ( https://gbatemp.net/threads/things-you-recently-bought-or-got.347639/page-341#post-6569949 ) have been on that beasty. For those too lazy to click a ps/2 keyboard with no windows key as it is that old. Sounds like a shotgun being racked in an 80s film every key press.
Reactions: orangy57 and lampdemon
Let me guess... Impulse buy!?
Reactions: lampdemon
I've been using a Logitech G610 for a few years now. I don't care for rgb, but a regular backlit is nice, and also the volume control is handy at times.

I was also tempted to go for one of those old ps/2 keyboards with a windows key.
Reactions: MythicalData
Will the Keyboard Function if the PC has a Boot-Up Password?
I have a G-Skill Keyboard, and for some reason, I Power on the Computer, and when I go to enter the Password, the Keyboard is not working. It is Lit up, but that is it. I have to use another Keyboard to do it. But once I get to the Login Screen, the G-Skill Keyboard is working perfectly.