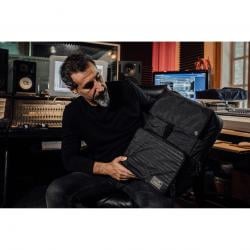 As its official name suggests, this backpack from HEX was designed in collaboration with Serj Tankian, System of a Down’s frontman. However, it packs more than an eye-catching collab as this backpack was designed for tech users in mind and has a rather unique feature in that it’s a backpack you can listen to. How, you ask? Let’s find out!

If there’s one thing about my time in high school that I won’t forget is that it was the period of my life where I got really into metal band System of a Down (SOAD). Whenever I had the chance, I was blasting their tracks from my speakers and headphones; even when I was studying! This addiction to their music continues to this day, making them one of my favourite bands of all time. Needless to say, I was elated to learn that they unexpectedly released two new songs to raise funds for Armenia; a country which the band members form part of its diaspora.

A few weeks before SOAD reunited to make these two new tracks after 15 long years, I got the opportunity to review a unique backpack that’s not so subtle in its nomenclature: the HEX x Serj Tankian backpack. I could say that my excitement was on par as when I learnt that SOAD released new tracks; it’s a bag designed by the frontman of my favourite band after all! I was even more stoked at the prospect of checking out what it offers, especially as it was designed by Serj for tech users. 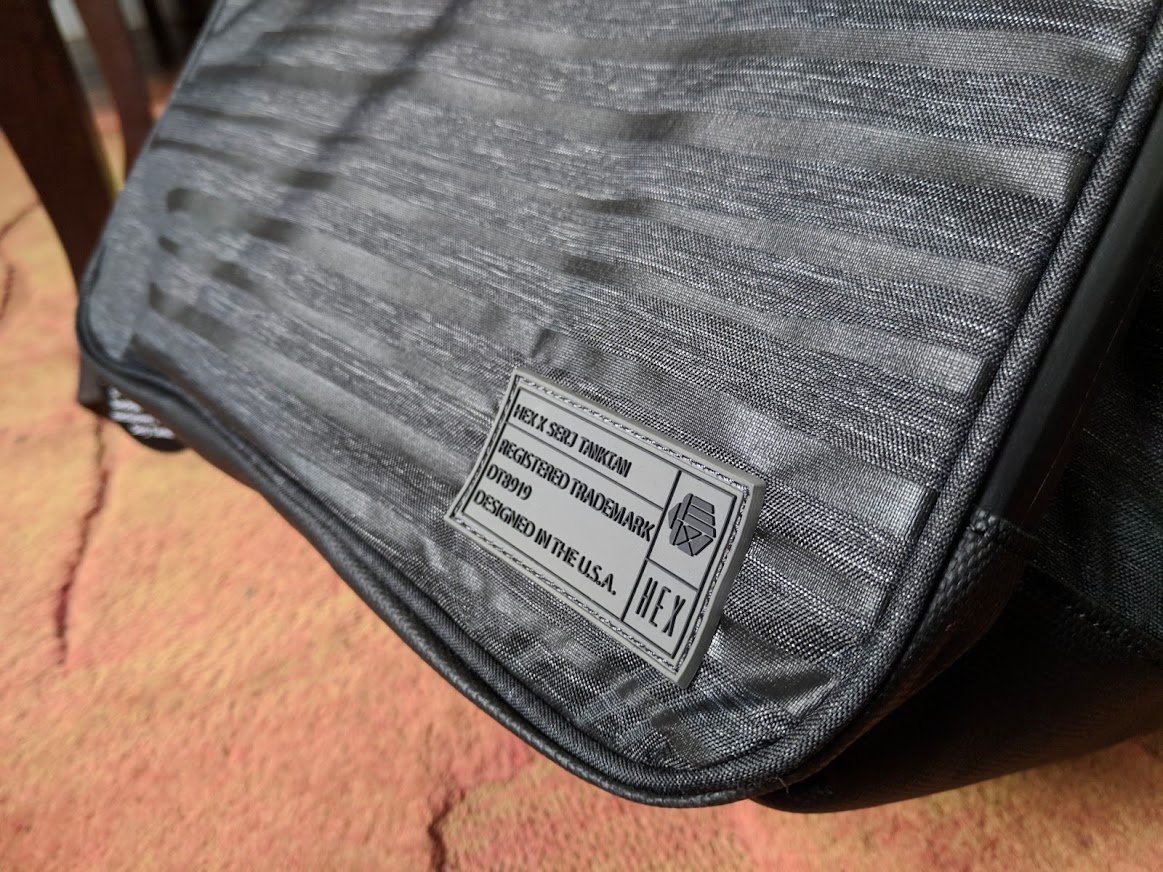 However, you couldn’t tell from the outer looks alone that this HEX backpack was designed with tech in mind. The grey colour scheme does not make it too flashy and the only “fashion” elements are the tonal stripes on the bag’s front pocket and straps which are in fact Serj’s artwork. This subtle approach is well received personally, even if I’m not particularly fond of the outer “boxy” design.

There’s also a “Space Clock” pin on the top pocket sleeve which Serj says he included to take your attention away from the center. Upon closer inspection, the clock in this pin is also an “armless” clock which the artist describes as representing timelessness. This is a recurring feature in the bag’s design which I’ll get to in a bit. 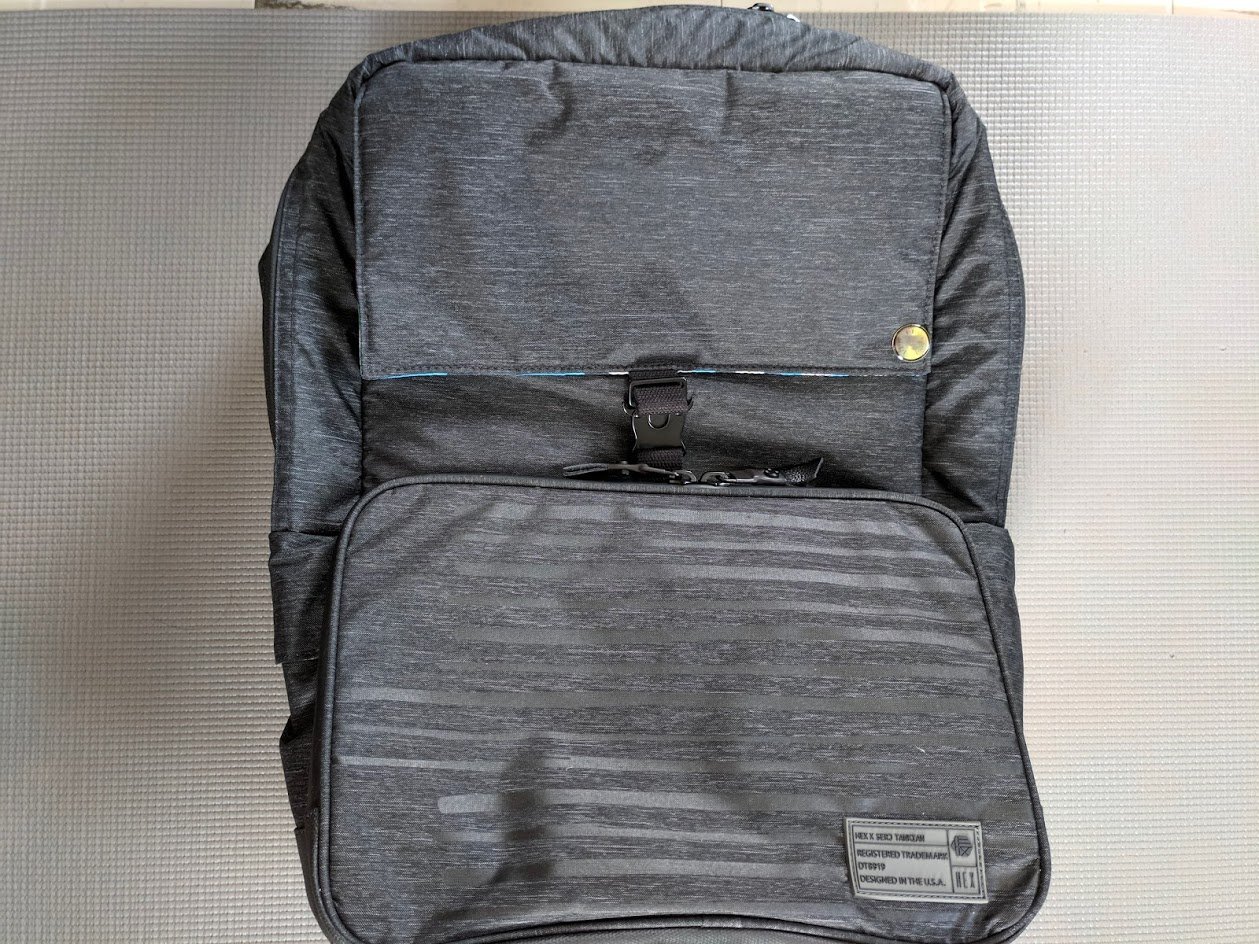 For the bag’s outer material, HEX used a  steel grey brushed nylon fabric that has been treated for water resistance. I found this to be a very important feature, particularly given that I often carry pricey tech in it from laptops to video game consoles; and that the fabric keeps liquid from reaching my devices gives me some much needed peace of mind. Of note, the straps’ inner portion are well padded and have a soft fabric finish that makes them feel comfortable over my shoulders. The part where my back comes into contact with the bag also features some light padding which adds to the overall comfort. 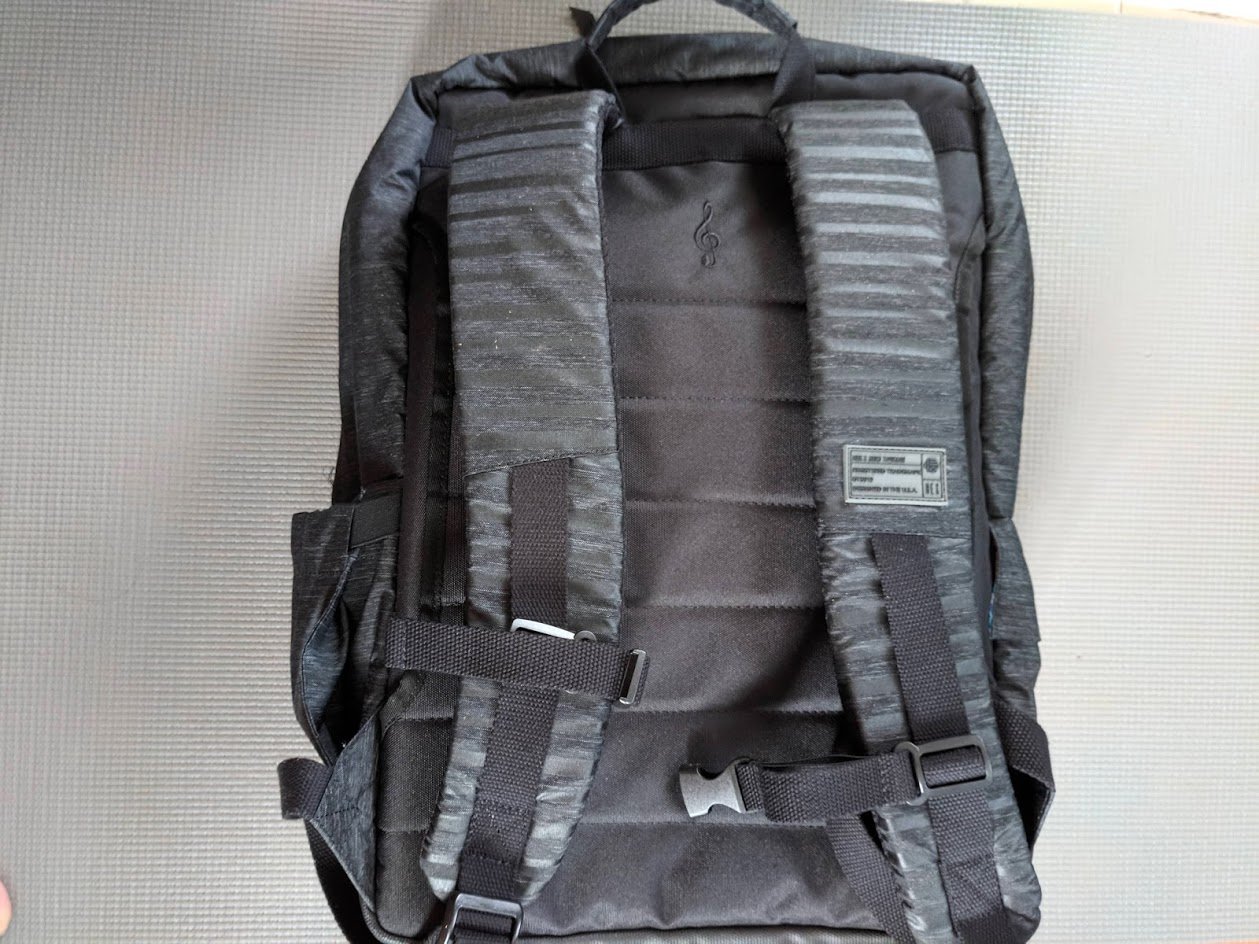 Even if from the outside the HEX x Serj Tankian backpack is rather inconspicuous, the inside of the bag is a totally different affair. Once the pockets are opened and the main compartment unzipped, you will see a very colourful interior lining which features Serj’s  “Space Clock” artwork. It is composed of patterns of clocks without arms of different shades and accents; again representing timelessness. But it does not end there with this artwork as they further allow you to literally listen to the backpack.

With the Arloopa app, the “Space Clock” artwork pattern triggers an AR feature where once you point your phone’s camera (via the app) at the inner printed lining, you can play some original soundtracks composed by Serj himself. 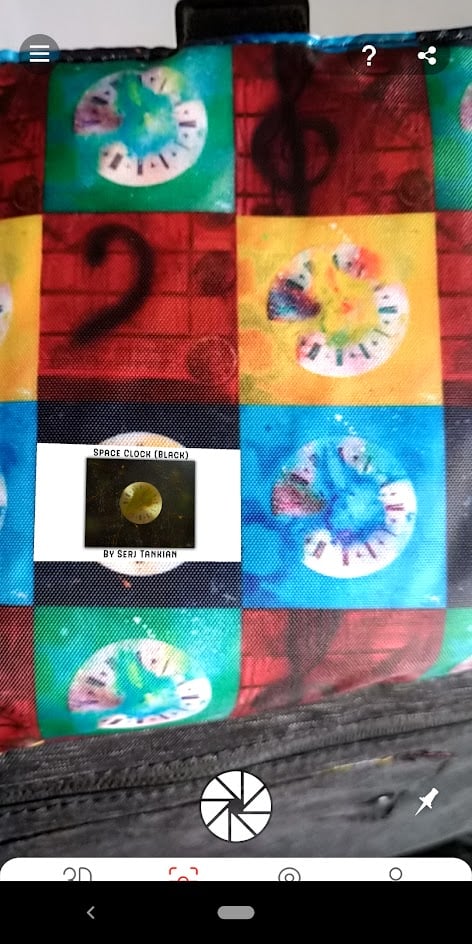 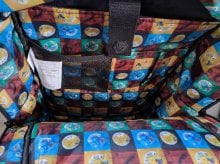 Granted, it’s not a new SOAD-level music and doesn’t feature any vocals but it’s a rather cool multimedia experience that I haven’t come across in any bag. You can catch the tunes that play between 2:06 to 2:23 in the video below:

When it comes to the actual function of the bag, I am overall very pleased with what it offers. I really appreciated how generous they were with the large main compartment that allows one to generously fit in documents, headphones and charging bricks. At the back of this compartment is a padded sleeve that securely fits a 15" laptop. There’s another padded compartment in front that fits another 15" laptop.

Another feature of the bag that I really came to like is its abundance of small pockets within its compartments. Whether it’s in the main compartment, the lower front pocket or the top one, you’ll find small zipped, meshed or sleeved pockets that nicely fit cables, power banks and external hard drives. These are great to organise the multitude of cables that come with tech these days and I found them to be particularly well suited if you are frequently taking your tech on the go. The sheer number of smaller pockets in this bag is not a feature I found in other bags, even those designed for tech users. Moreover, they are easily accessible while keeping everything neat and tidy when packed. 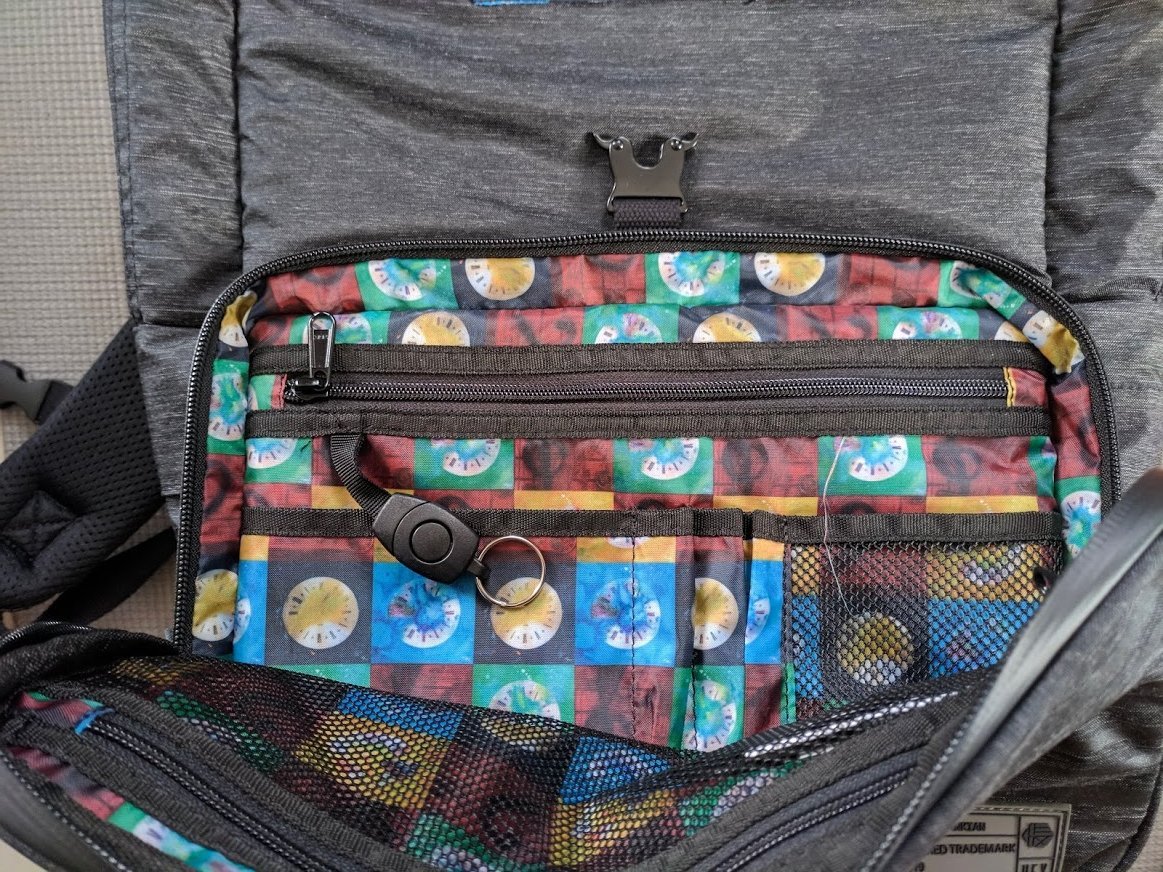 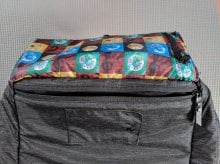 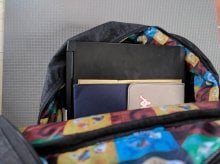 Given these features, I also have no doubt that the bag will be among my top choices to use when I decide to travel abroad again (not so soon). The HEX x Serj Tankian backpack was also designed with this purpose in mind as there is a trolley handle pass through on the back of the bag.

With a dimension of 17.5"L x 12"w x 7"H and a volume of 24L, this backpack holds quite a lot without looking oversized. I easily fit in my chunky 15” laptop, my 13” Surface Pro 3, my Nintendo Switch, my eReader, a notepad, two controllers, the charging cables for each of these devices and a water bottle in the side holder and still have space to spare. 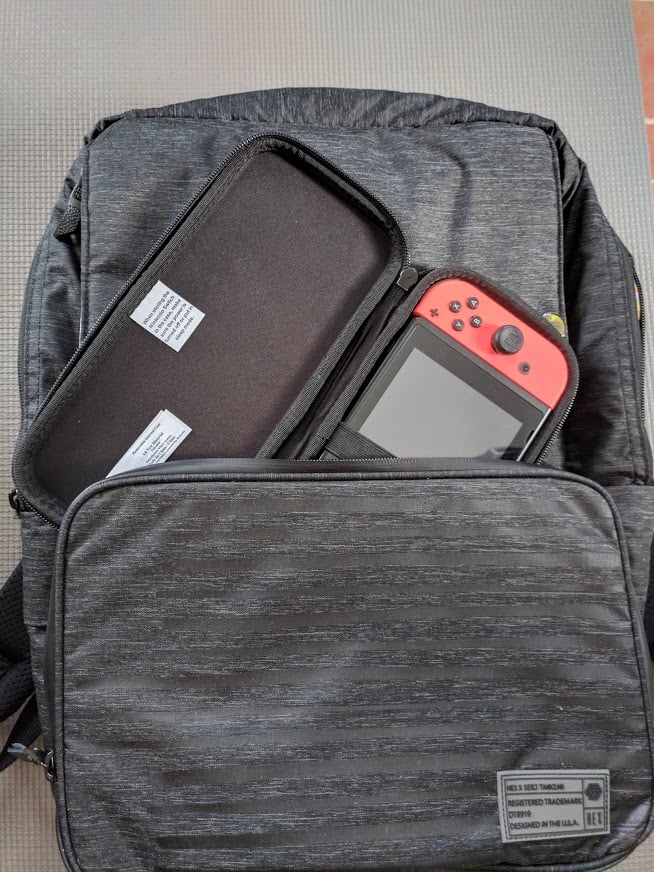 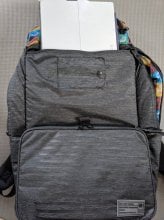 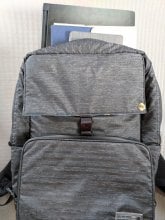 However, I noted that the side water bottle holder is not deep enough for a 1.5L water bottle and mine even fell off several times, so I’ve had to opt for a smaller bottle to take with this bag. It’s not ideal for me and I wish that the holder would accommodate larger bottles without any issues. On a personal note, I am also not a fan of the nylon finish of the interior lining, which gives a rather plastic-y feel. I wish it were made of some textile material for a softer feel as the outer layer is already water resistant.

Nevertheless, I do enjoy using the HEX x Serj Tankian backpack for its tech-optimised design and how it allows me to carry my tech and accessories in a neat and organised fashion on-the-go. At $200 at the time of writing, it might be at a rather steep price but you could consider it as a “designer” tech bag that also has a unique multimedia feature. 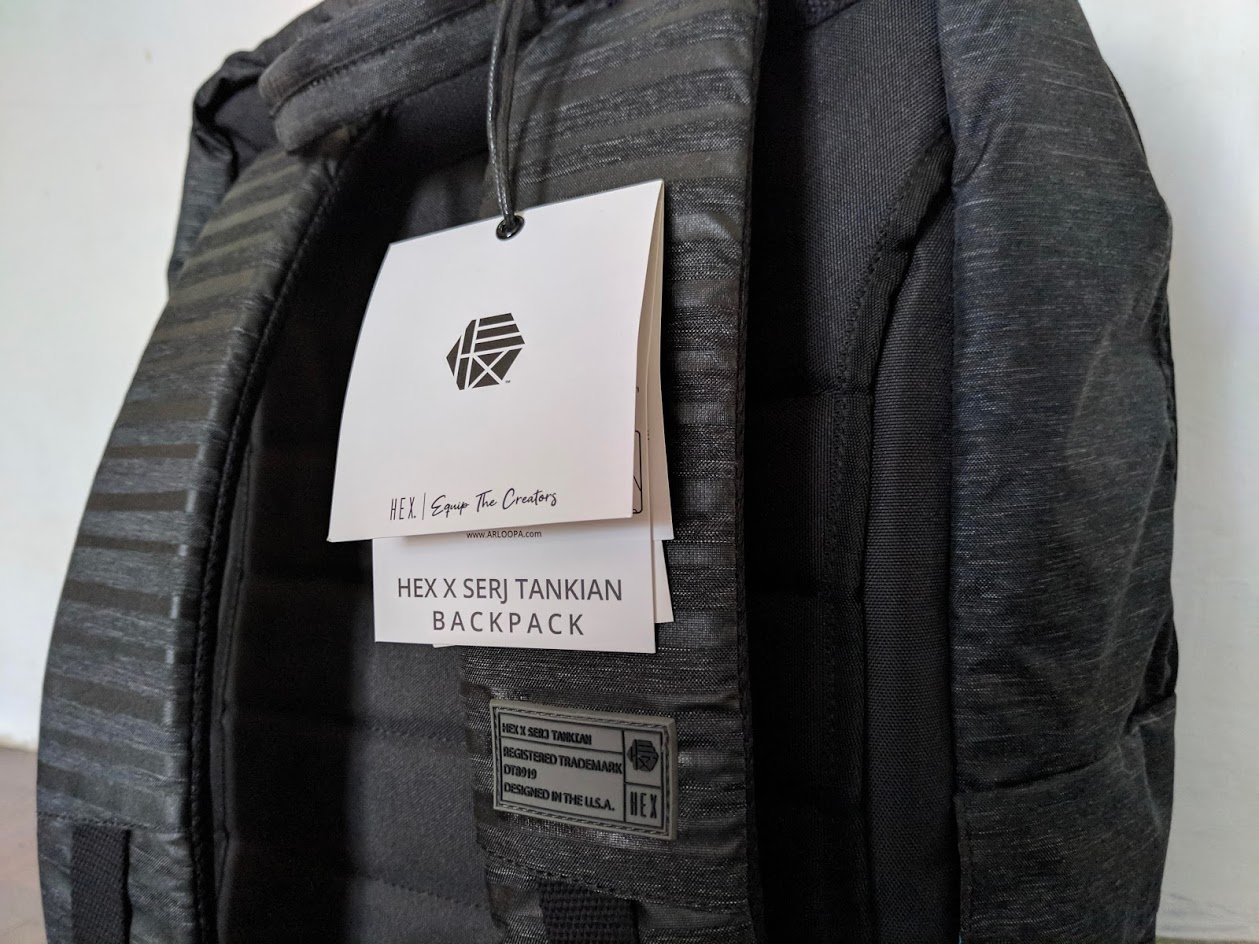