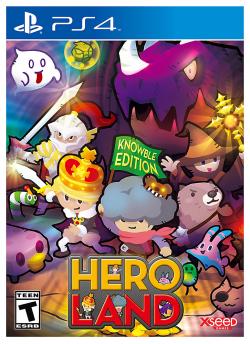 WELCOME TO HEROLAND! A magical paradise where YOU are the hero! Or so it seems… Does this quirky RPG have what it takes to distinguish itself from other games in the genre? Let’s find out. HEROLAND AWAITS!

Heroland is a fun turn-based RPG that doesn’t takes itself too seriously and it very aware of its absurdity. The game was developed by Netchubiyori Ltd. and FuRyu and was published by FuRyu, XSEED Games, and Marvelous Inc. Right off the bat the game announces in big bold text:

“WELCOME TO HEROLAND! A magical paradise where YOU are the hero! Embark on quests, conquer dungeons, and beat legendary monsters to a pulp… So choose your weapon and level up for the epic adventure of a lifetime! ONLY AT HEROLAND! You’ll find fame, fortune, and friendship or your money back, GUARANTEED! That is, of course… If you can face the Dark Lord and live to tell the tale. HEROLAND AWAITS!”

… That is if you weren’t just a low-level tour guide at Heroland guiding the guests through their “heroic experiences” fighting actors monsters and looting trash treasure to defeat the DARK LORD. That’s right, this game takes the tropes of serious RPGs and turns them on their sides in a wild rollercoaster of fun. As a tour guide it is your strategy to help these bumbling morons (some of who are so delusional that they think everything around them is real) through their adventure by telling them what to do and making sure they are satisfied with their experience. But things may not be exactly as they seem at this surreal theme park. You see, working at Heroland is a lot like working at Hotel California—you can check out any time you like but you can never leave. 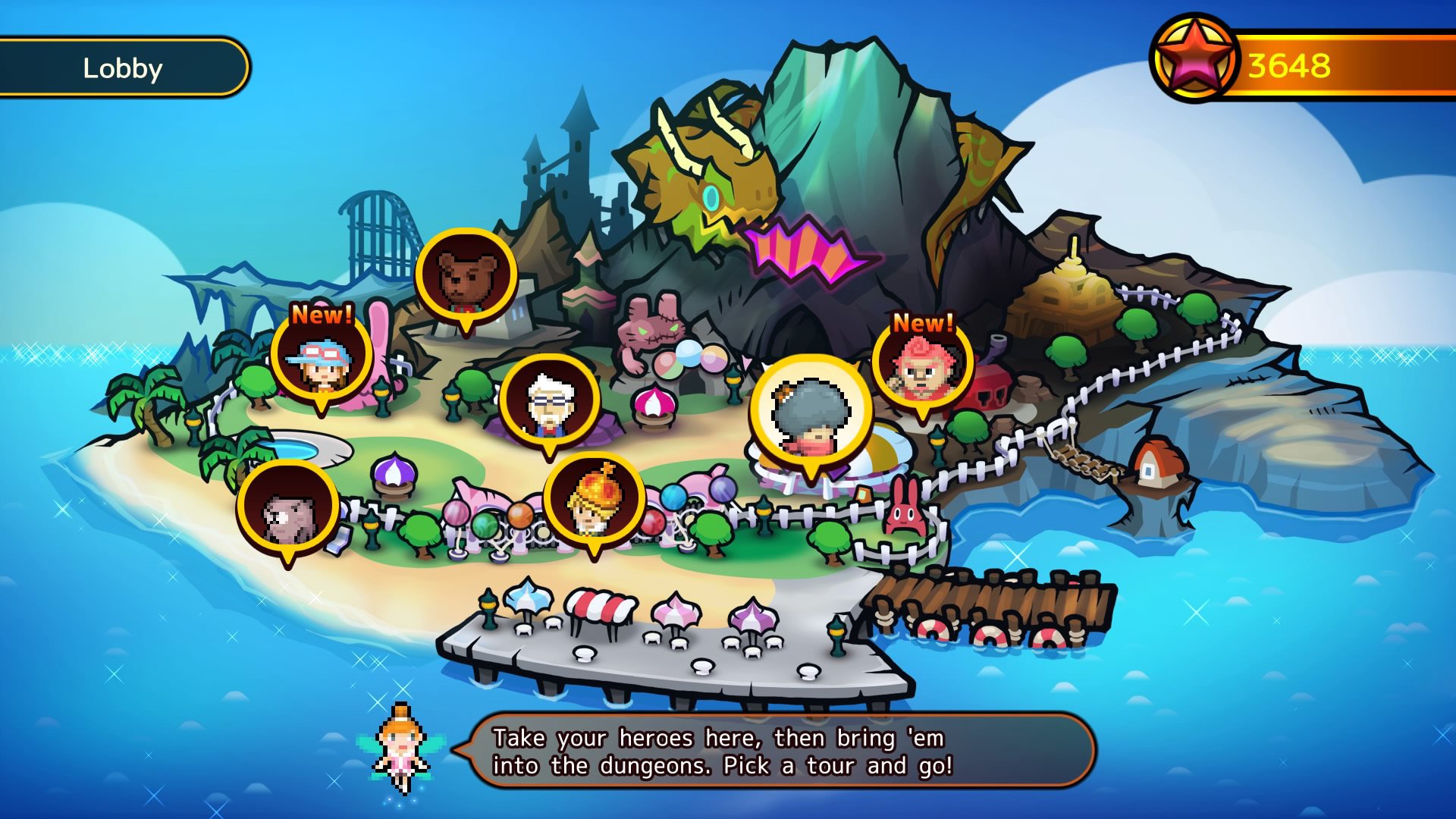 When I first watched the trailer to this game I thought I noticed a Paper Mario aesthetic. However, upon reflection it’s not really like Paper Mario at all and more like… Well I don’t know what other game has a look quite like this one. The characters are in a state between 2D and 3D, where the pixels give them some depth, but not much, as they walk around in 2D drawn environments. Heroes and monsters alike wobble around the screen and even though their legs never move, their actions, movements, and attacks give them enough character to keep us entertained. This is an interesting artistic choice which I think makes up much of what makes this title stand out from the rest.

This game shines the most in its combat. Unlike other RPGs where you control every character and calculate every move, this game has the heroes fighting on their own while you sit back and watch them go to work. Or… It would be that way if they weren’t bumbling morons. Instead in this game you have the option as the tour guide to direct the characters how to attack, but you’ll never be able to control everyone at once. You’ll find that once you tell your swordsman what attack he should use, your mage has already done something that you wish he hadn’t. You can give general advice to the entire group on how to proceed, allowing them to worry about the specifics; tell people specifically what to do; chuck potions at them occasionally; and everything in between. 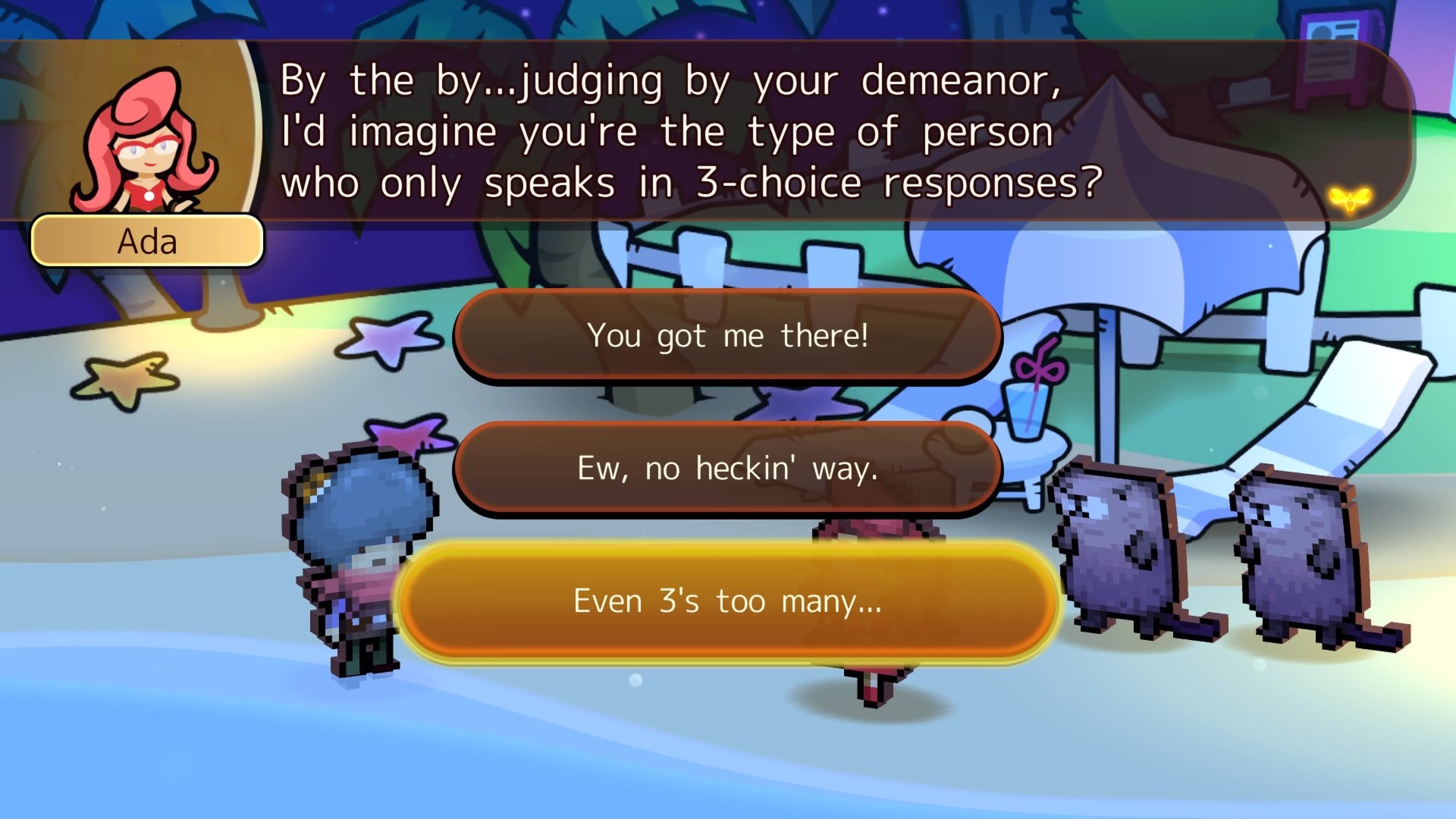 Before each dungeon tour you prep your group by changing their group lineup, weapons/items, and skills. Once you’ve chosen your party and prepped them up, you start the tour! Each tour consists of several battles, events, and treasures. Latter tours even have branching paths for your party to take. At the end of each battle your crew gains experience MonCoin which is distributed to the group to increase their hero levels. You also gain friendship points with characters by guiding them on what to do and by giving them your hard earned treasure. By leveling up friendship you unlock additional sidequests and they gain more skills.

The weapon system in this game in unique in that you let your heroes rent weapons from your own private collection. That’s right, you’re supplying these guys with everything they need out of your own pocket! There are hammers, swords, staves, and tablets. Each weapon has a certain durability and you have to be careful because these clumsy morons are liable to break weak weapons and leave you having to spend the dough to reequip your team. It’s treasure time at the end of each tour! You can be selfish and keep the prizes all to yourself to decorate your dorm room or give it to another hero to increase their friendships. 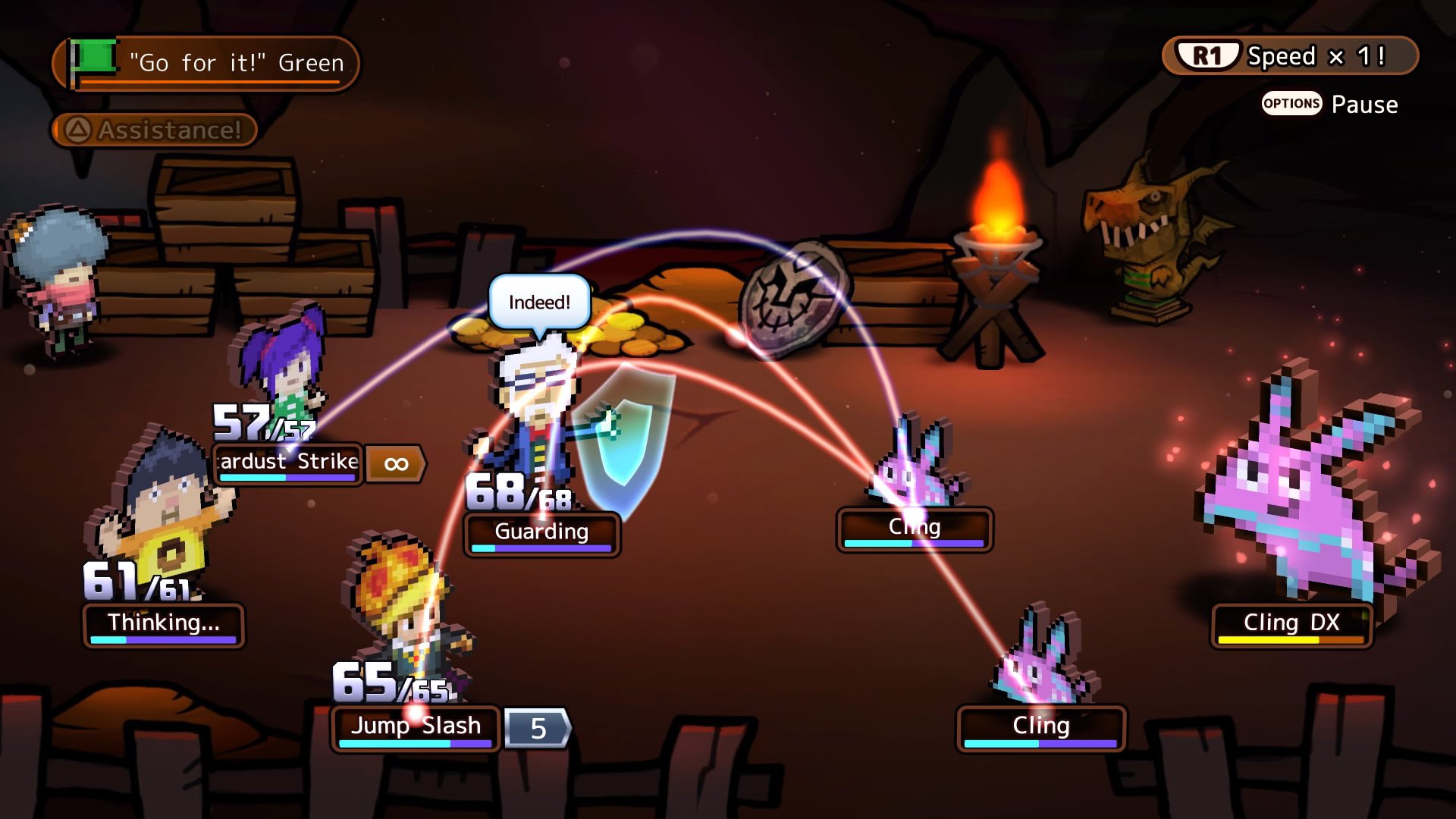 While I understand this is a goofy game, I personally feel that at times it leans too far towards the outrageousness of the characters and I would have preferred them to be a little more grounded. Almost every piece of dialogue in this game involves a pun, a joke, or at least a lead up to a joke. While this humor is charming for a time, I found it got boring after a while. I would have preferred the jokes to be a bit more varied or at least have some serious dialogue in between jokes to keep the material fresh. There’s not a straight-man in this game (well, except perhaps the silent protagonist, but he doesn’t really count) and I think the addition of one that points out the absurdity of everything from time to time would have been a very welcome addition—an anti-comic relief if you will.

One last thing I want to point out before it’s curtains for this review are the MonStar meetings. Obviously, you’re an employee at this park and the monsters are actors. It logically follows that you will be able to listen in on and interact with the actors outside of the dungeons. That happens during the MonStar meetings where the team organizes their plan of attack for the next dungeon. Listening in on these meetings is optional but it allows you to figure out who the boss is, the strength/weaknesses of the enemies, information on the treasures, and what items and weapons you should bring.

There’s a lot of charm to this game and a lot of things to keep you occupied. It’s challenging, has heart, and has a unique aesthetic that I hope to see more of in the future. Despite its flaws, I recommend this title to any lover of RPGs. 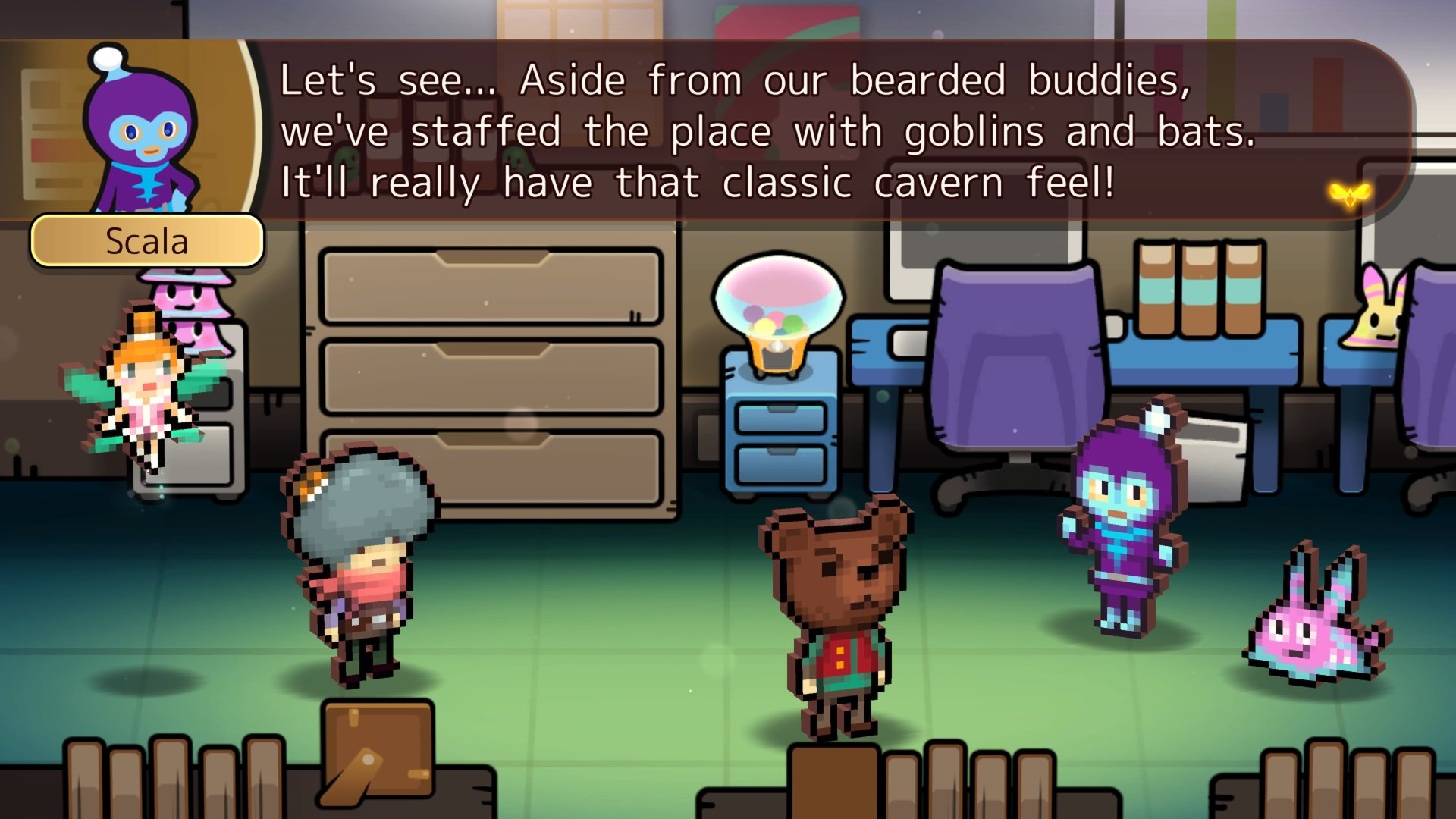 Verdict
You, shaunj66 and IncredulousP like this.
Unlike this review