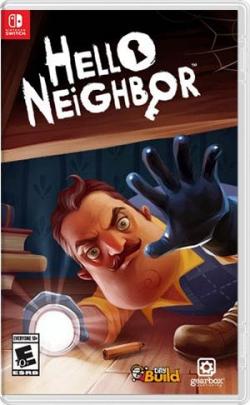 I was quite excited to try this game, being a fan of mystery and stealth-based games. Will it have interesting puzzles? Will it be full of exciting tension with a satisfying conclusion at the end?
Hello Neighbour's game concept sounds intriguing. You're a young boy who witnesses something horrible at his neighbour's house. There are some screams and a struggle. You see your neighbor lock someone or something in the basement, and place the key upstairs. The town being wholly devoid of human life besides you two (or three), it is up to you to investigate! 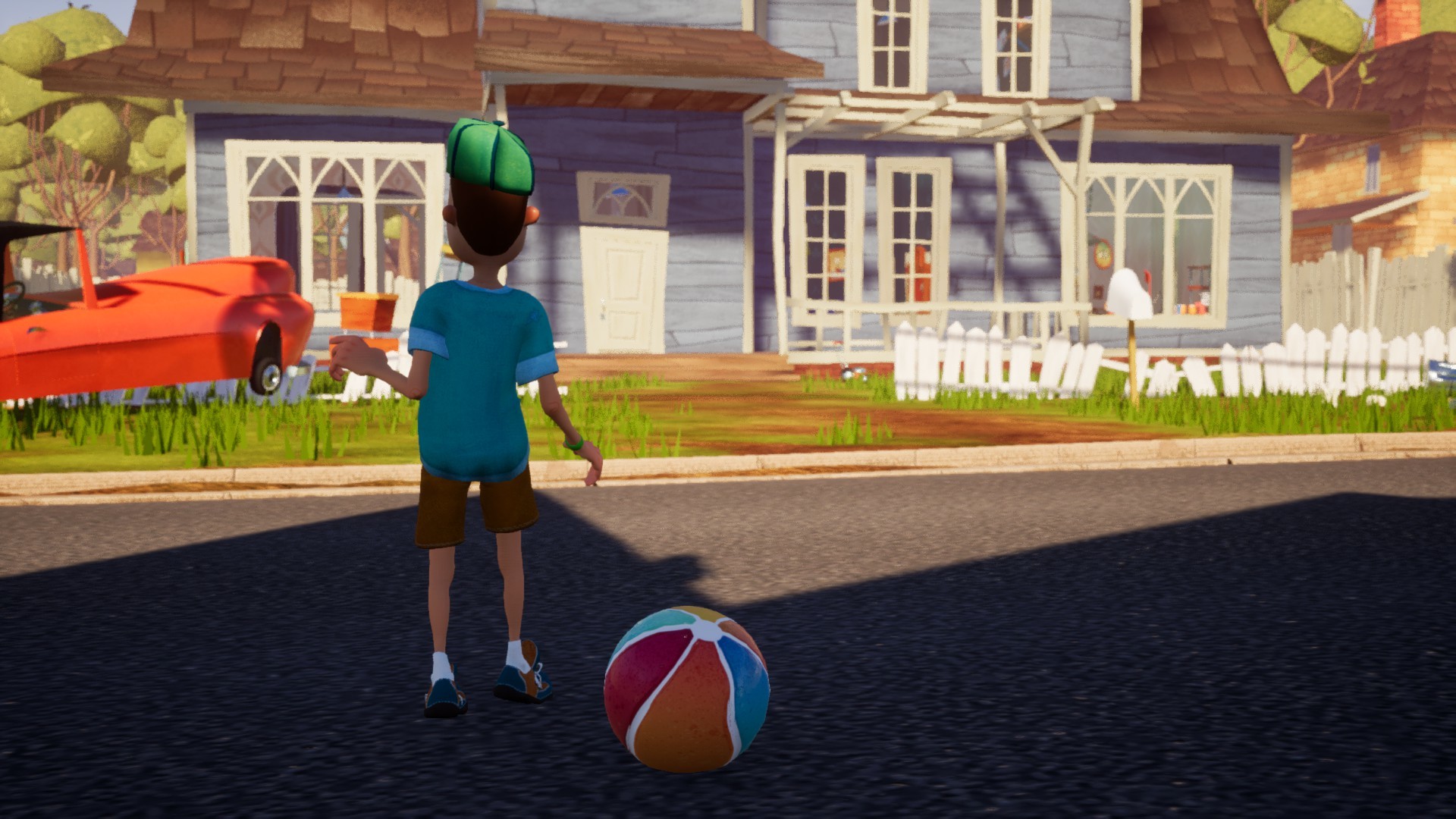 What are those strange sounds?

Unfortunately, the game fails to live up to its exciting premise. The controls are awkward, the visuals are weird, and the puzzles simply aren't great. 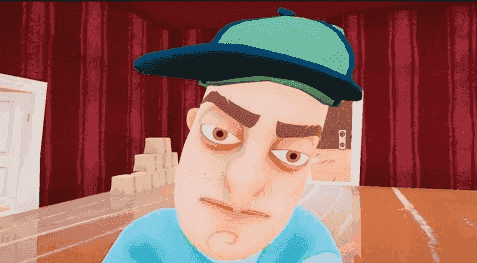 An adult in a boy's body?

The artstyle is wacky. I like that it has its own style, and isn't just a copy of other games. But, it creeps me out. It kind of looks like Pixar remaking Rocko's Modern Life, with Tim Burton supervising the process, but everyone running out of money partway through. Everything about the game is slightly creepy, enhanced by the fact that it seems like it is supposed to be a little cute. The playable character is especially weird - he looks like a tired, 40-year-old man inside a little boy's body. I recoiled from the screen when he first showed his face in the game. He gets older during the game, but not a lot less creepy. 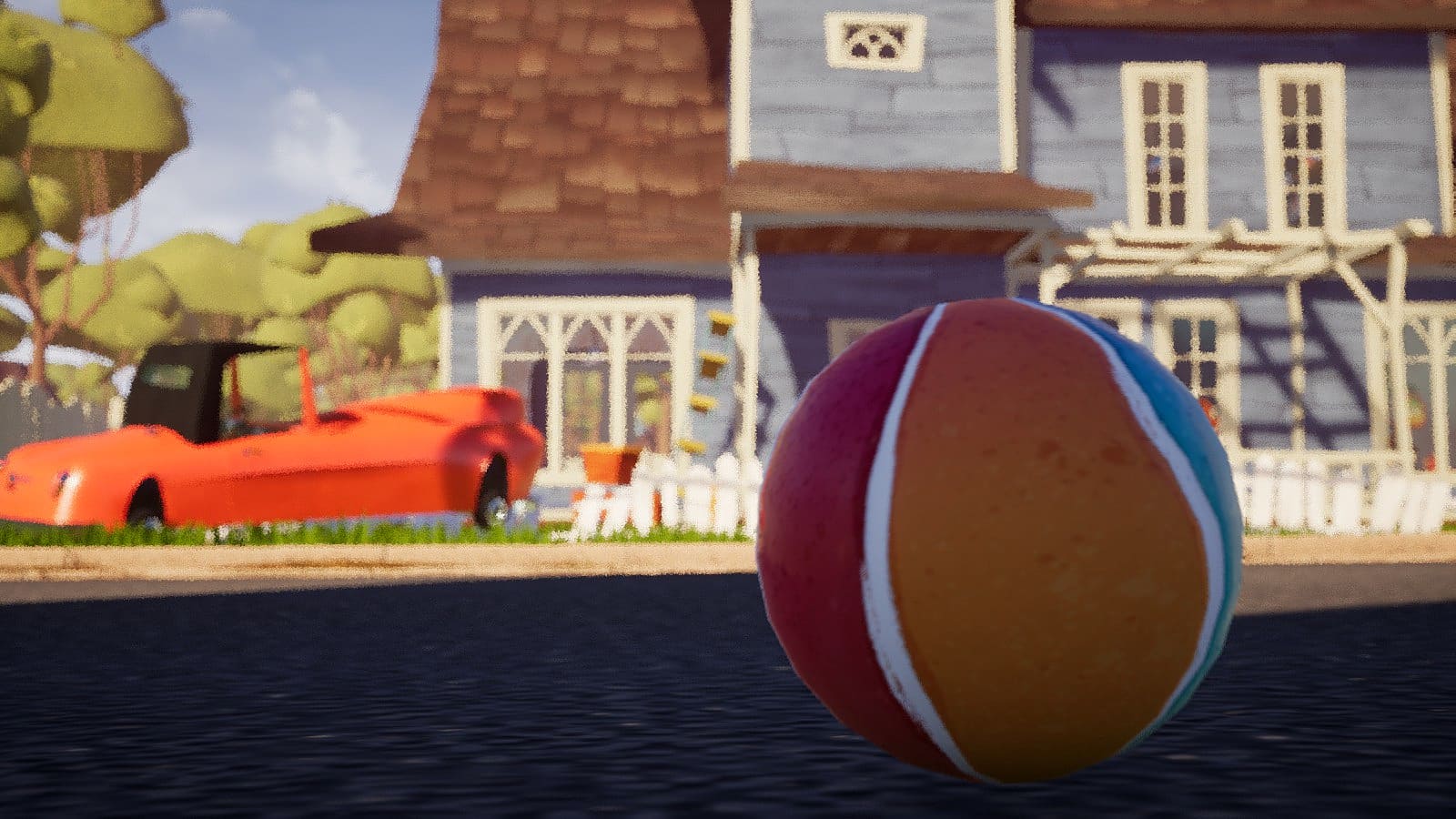 What has the ball gotten you into? 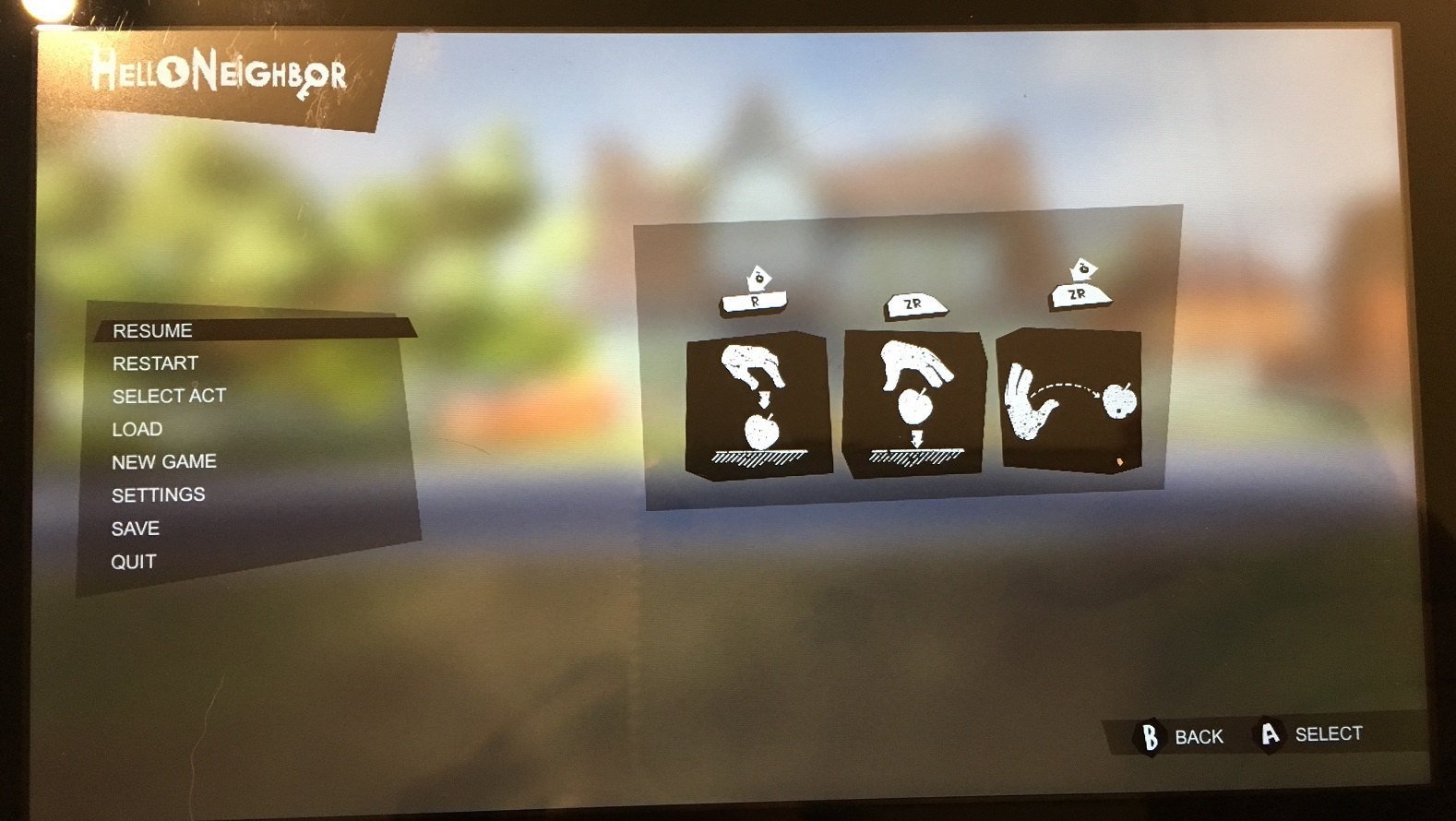 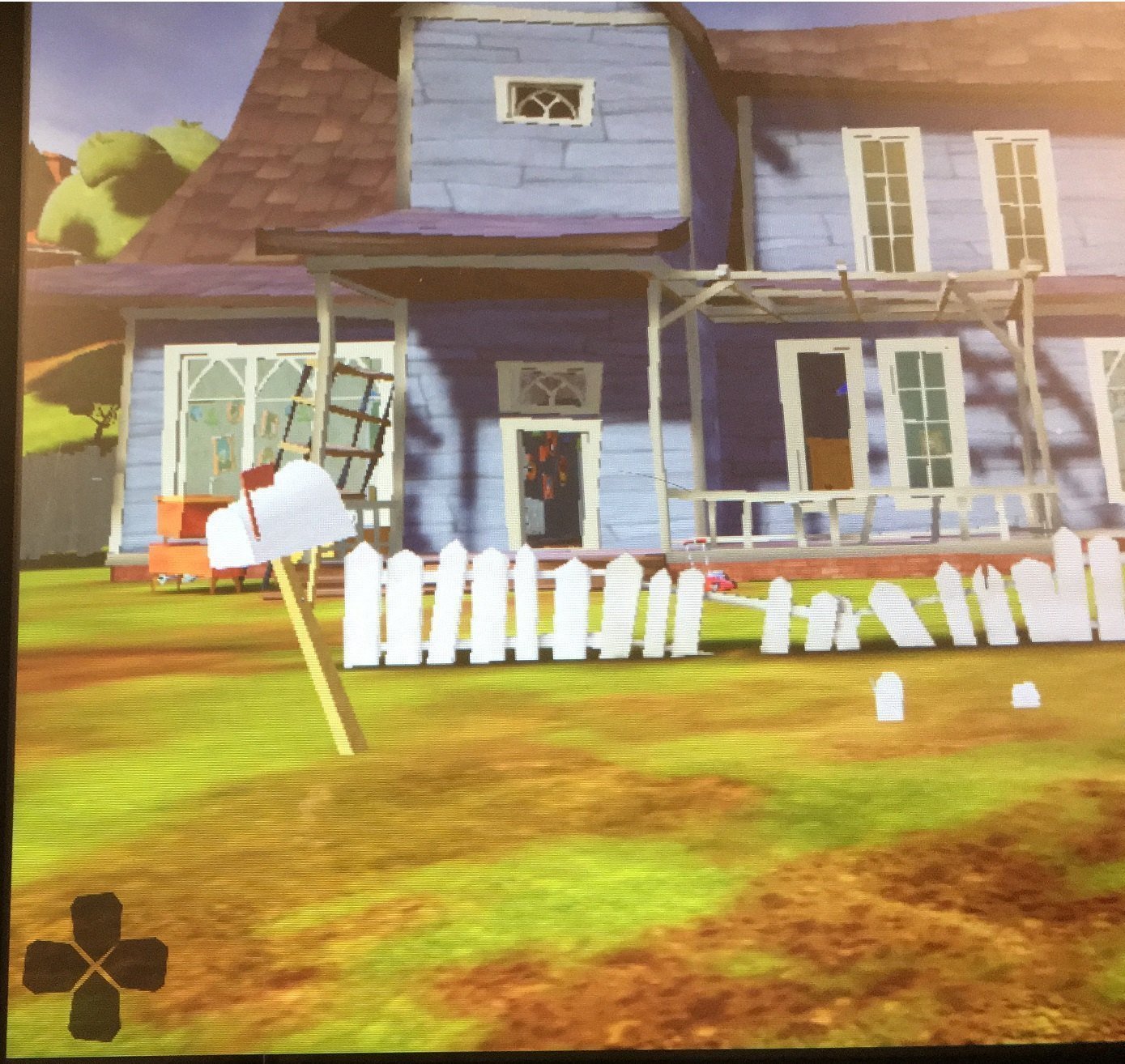 First: The only information you get on how to manipulate objects. Second: This weird D-pad symbol kept randomly appearing, which was a mystery until I realised it shows what you are holding.

There's very little to help guide the player in the beginning of the game. You start off your adventure by mindlessly kicking a ball down the road, when you hear a kerfuffle in the aforementioned house, and investigate. After the initial cutscene you are free to do what you wish - but there's no shred of explanation, or tutorial for explaining the mechanics or the controls. I didn't even know you could pick up objects to start with, until I went to save the game and quit and saw some slightly cryptic pictures over pictures of the Switch buttons. It's also not obvious that the house behind you can be entered - while kicking the ball down the road I had a look at some of the houses and walked around a few, of which every one was completely static, including a swing that didn't move an inch when I walked into it. So, I had no reason to believe that the house behind me was anything special. I had to look at a guide after trying to get onto the roof fruitlessly for half an hour, only to find out I was supposed to enter this particular house and do something first. 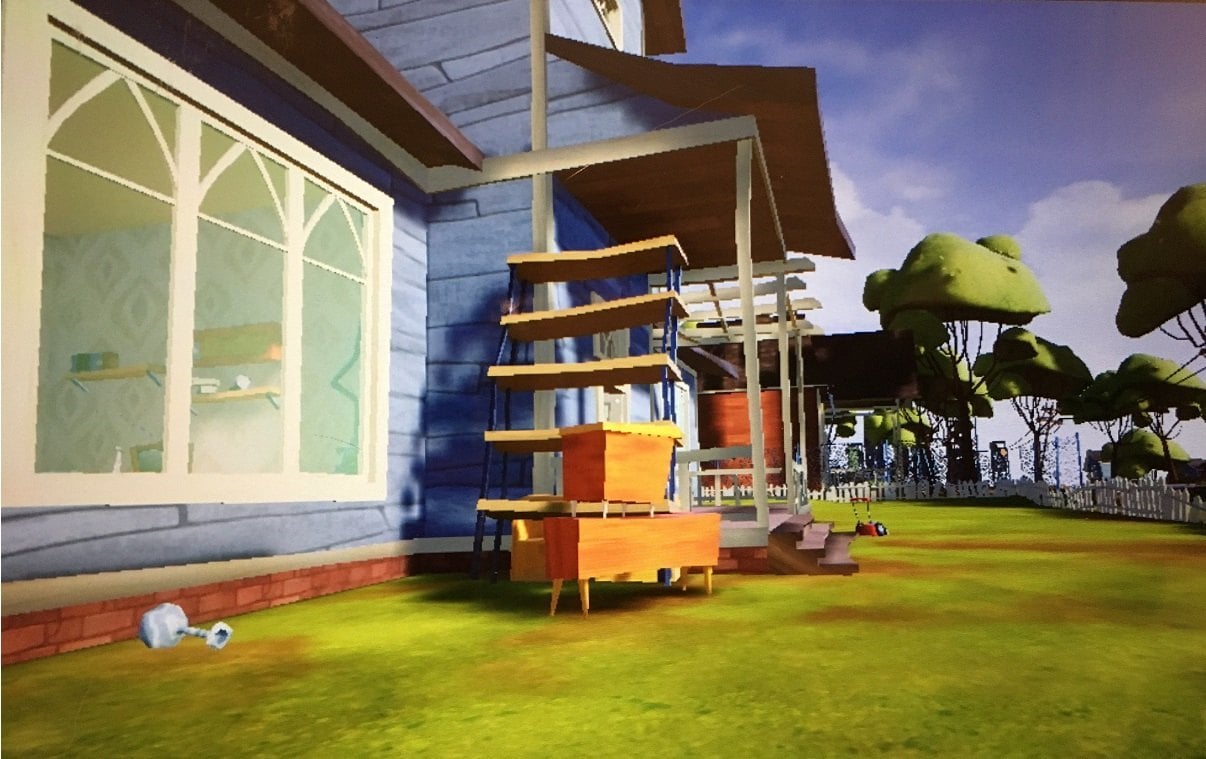 This seemed like the obvious first step, but no - you have to do something else first. 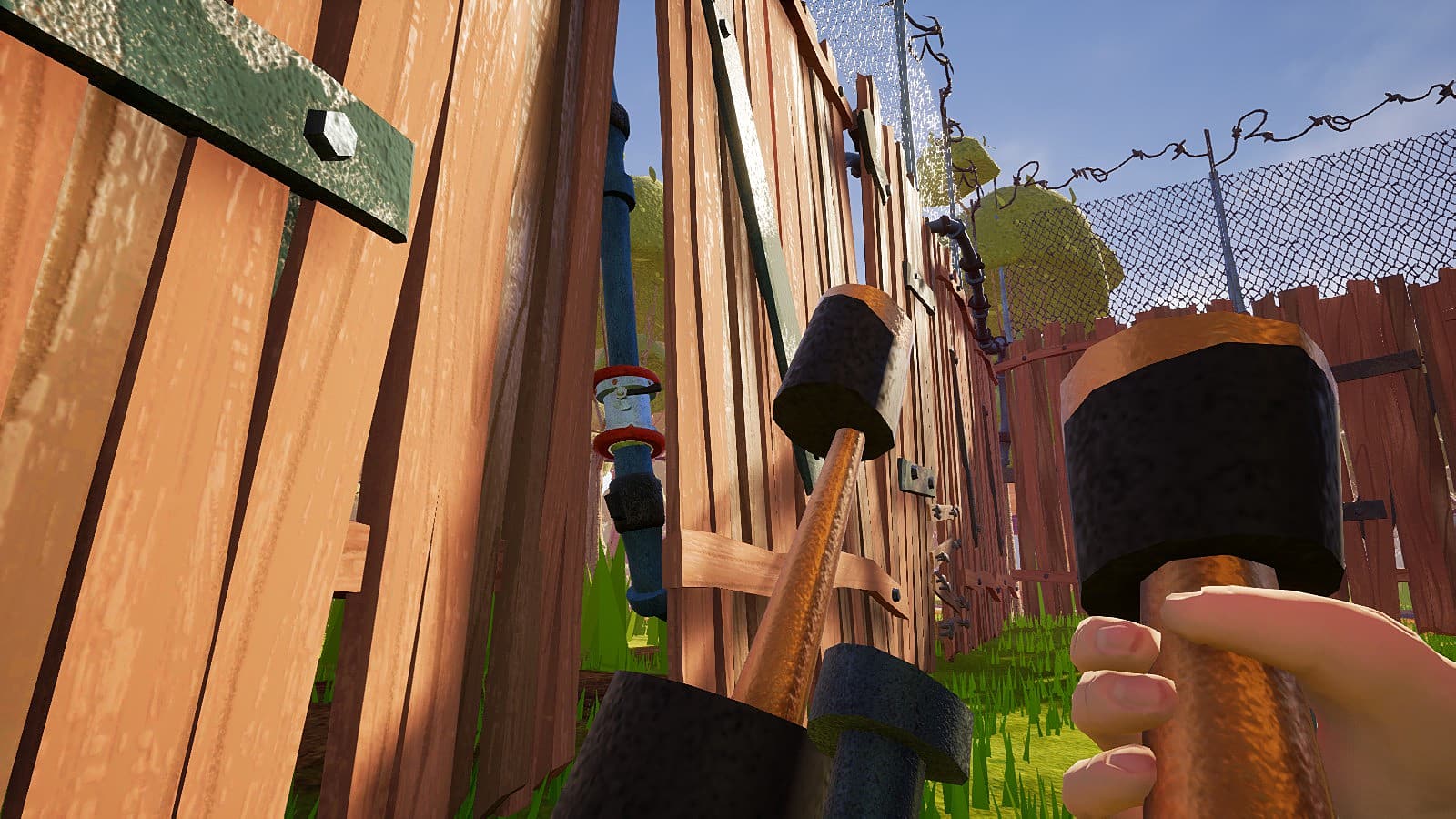 First-person perspective makes it hard to see what's going on around you.

Gameplay suffers from a number of issues. First, the forced first-person perspective: as a stealth game, you need to know what's going on around you. Other games manage this by giving you a third-person perspective and letting you swing the camera around to get an idea of your surroundings. In first-person, you can't see around you very well without moving yourself (which could alert the neighbour), and a first-person view on the world is only a small square right in front of your face, not everything around you - you don't have peripheral vision in video games. It is also difficult to aim when throwing or picking up objects, as the cross-hair is tiny, and in white, so it becomes invisible against most backgrounds. 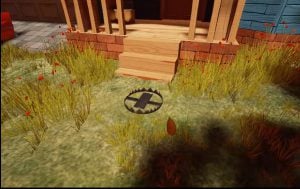 Secondly, there's no way to tell what the neighbour is doing. He roams around randomly, except perhaps spending more time in the areas you've been caught in. There's no way to form a solid plan about how to move around, because the neighbour could come upon you at any moment. The only plan that really works is repeatedly getting yourself caught in a particular location far from where you need to go, so the neighbour spends most of his time there. This doesn't really feel clever or realistic, though - more like taking advantage of a glitch. As above with the forced first-person perspective, you can't know where he is except if you happen to be looking right at him, which makes it harder to go and solve puzzles elsewhere in the house. 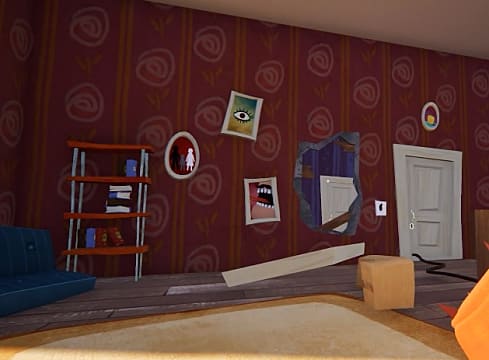 Thirdly, the puzzles seem completely arbitrary and random. The objects in the game don't give you any clue as to what they can be used for. Solving a puzzle involves trying random objects in different locations to see what might happen. There's no carefully laid hints left by the developer that a player can tune into subconsiously, and be unknowingly led to a solution while feeling really clever. No, you just randomly try different things until something works. Some of the puzzles involve stacking boxes on top of each other to reach higher places, causing much frustration when the tower falls apart or you can't work out exactly where your feet are and you fall off. One notable puzzle has you needing to throw an object at a painting with absolutely no indication of why this painting in particular, as opposed to the many other paintings in the house, is special and could produce an effect when something is thrown at it. It's probably impossible to complete this game without looking at a guide at some point, simply because most of the puzzles aren't possible to work out logically, so it doesn't matter how clever you are.

Puzzles remind me of the old Monkey Island or King's Quest games, where you would need to collect every object you could and try them in all sorts of unlikely locations until you hit on the right combination. However, in those games you can play them at your own pace, but here, you have to do all your experimentation under time pressure with a crazy guy trying to find you. 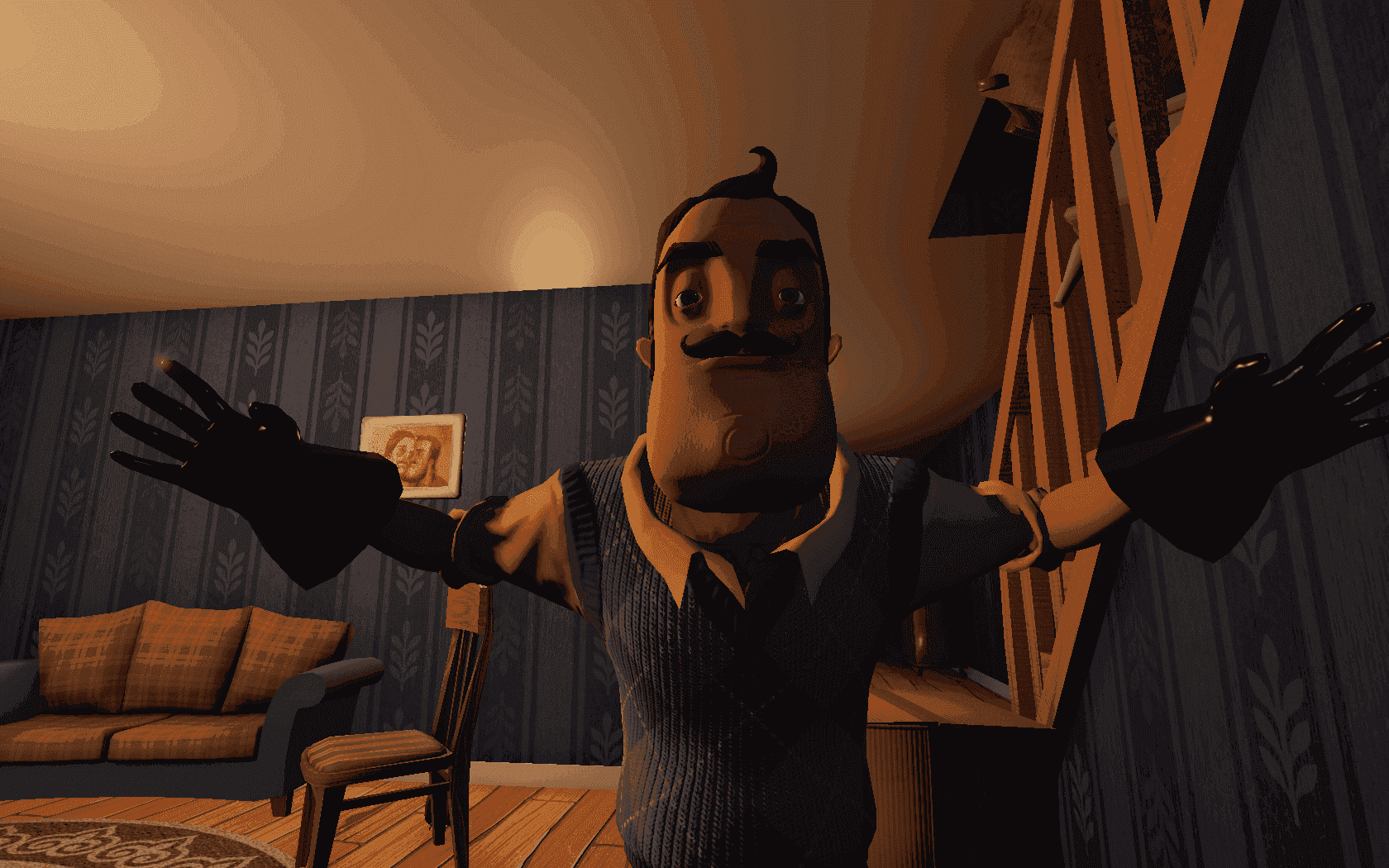 He looks so calm as he grabs you

Fourthly, after getting used to the game, any atmosphere of tension and fear completely evaporates. There's no penalty for getting caught except for being sent back outside. You even get to keep everything in your inventory, and any environmental manipulation you did, sticks around. Many times it's actually easier to progress if you're willing to get caught on purpose. The neighbour goes from being terrifying to merely being a funny annoyance.

There are some changes that could be made to improve on these problems. Firstly, to be able to get a better idea of what's around you and where the neighbour is - allow third-person perspective, and add a little map in the bottom right corner of the screen that shows dots indicating yours and the neighbour's locations. This way you have some information to base decisions on, and the game won't feel like such a lottery. Secondly, have different times of day, and have the neighbour follow a routine (that could change based on your actions). This way you can make a broad, general plan of attack before you enter the house. Thirdly, reduce the beginning player's confusion by adding a little tutorial at the beginning for the first puzzle, explaining the controls and the mechanics. A co-operative mode would have been fun too, with puzzles that required two people.

It is really a shame that this game had such an interesting concept but spectacularly failed to pull it off. There's no tension (besides occasionally getting a fright when the neighbour grabs you and you didn't see it coming), the art is kind of caught between wacky-cool and wacky-ugly, there's no puzzle-solving "I'm a fricking genius!" satisfaction, and the ending isn't really worth all the effort it took to get there. I did enjoy myself a bit, so I am going to give it 4/10.

Verdict
You, SirNapkin1334, Zumoly and 5 others like this.
Unlike this review