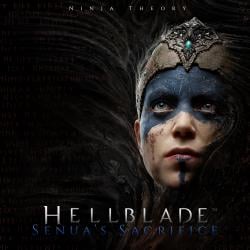 The voices are bustling. They are getting more frequent, telling Senua to turn back, that it’s a stupid move! Don’t move forward! Will she? Will YOU?

Senua, a young Pictish warrior, is on a quest to deliver her beloved Dillion’s soul, who was sacrificed after a bloody Viking raid in her homeland Orkney, from the grasp of Hela in Helheim. In order to open the gates to Helheim, she must first defeat Valravn, the God of Illusion, and Surtr, God of Fire. A seemingly straightforward task that is nevertheless not encountered without difficulties since there’s actually more to Senua than meets the eye… or the ears, in her case.

The young Pict is in fact afflicted with psychosis and hearing voices is only one of the many symptoms she experiences (and that the game make you experience). Throughout the various Celtic and Nordic settings that continuously test Senua’s resolve, you will have to help her surmount the ordeal that is dealing with her condition while fighting to rescue her beloved… 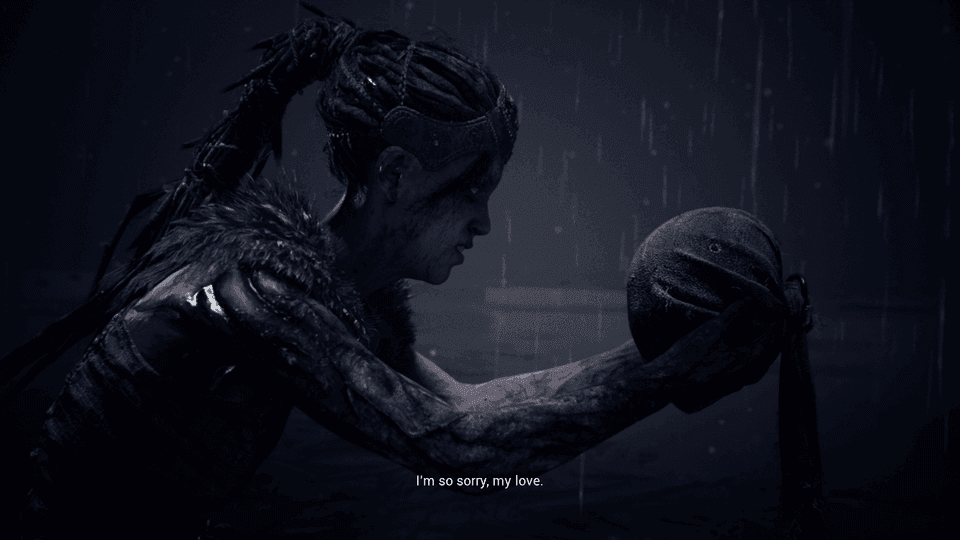 Is this the real life…?

Right off the bat, the most striking feature of Hellblade is its graphics. It’s the second game in recent years, after Resident Evil 7, that blew my socks off in terms of visuals. Ninja Theory has effectively set the bar to a new high with its latest title when it comes to graphics, couple that to the professional voice acting and motion capture, the game comes really close to what I would expect from “photorealism”. The characters and environments are so beautifully rendered that every single frame could be used as a wallpaper. 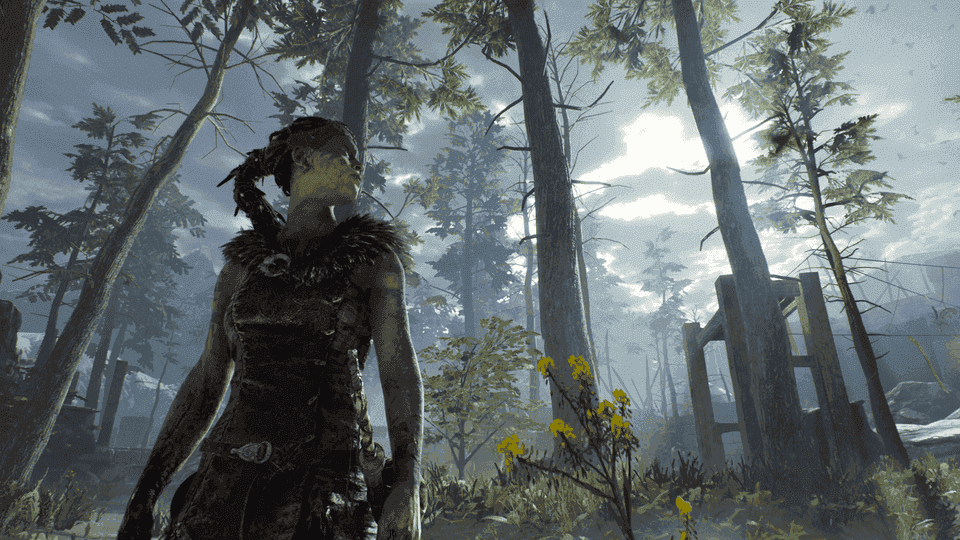 Cropping the pictures don't do them justice :(

However, despite all of the effort poured into making such visually stunning environments, they cannot be enjoyed to their fullest. For all of its visual beauty, Hellblade has few action sequences throughout its ~7 hours of gameplay. Besides its combat scenes, it could be compared to a walking simulator where most of the time you’ll be guiding Senua along the clearly laid out paths while encountering some puzzles to solve (more on those later). She cannot jump, crouch or even pull out her sword at will, unless the game allows her to (except jumping, she can never, ever jump). Add this to the pre-configured paths, you have a gorgeous-looking game with a linear layout and very limited exploration; making it almost a "Move Senua from point A to B" game.

In my opinion, it’s a waste of opportunity to not utilize the game’s astonishing environments to their fullest. I don’t mean that it should be open-world. On the contrary, for games like these, a linear path is suited to keep you on track. But the exploration feels so limited that the beautiful settings can mostly be taken in only at a distance. And when the character in a game so beautifully presented cannot even climb over a rock a quarter of a meter high to peek down a ravine, it’s somewhat of a let down. 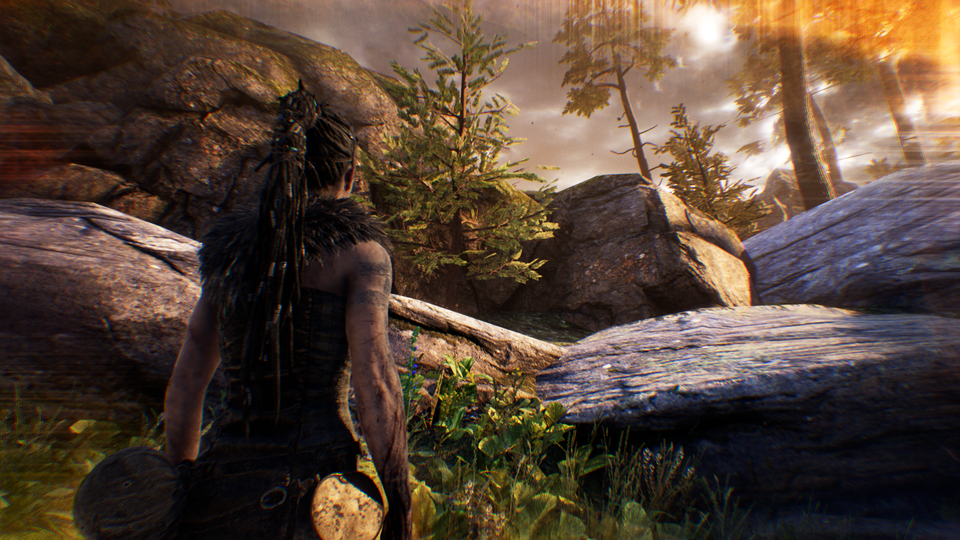 Learn to Fight, Fight to Lean And Above All, Do Not Die

When actually in combat mode, well you’re in for a surprise right from the first battle. Not only does the game prevent you from drawing your sword outside combat, it doesn’t give any instructions as to how to inflict blows or parry incoming attacks. It’s all up to you to figure it out. Although the moves are not too hard to get a grasp of, the never ending enemies that come at you for the very first battle will inevitably make you bite the dust. That’s when the game’s most controversial mechanic is revealed: 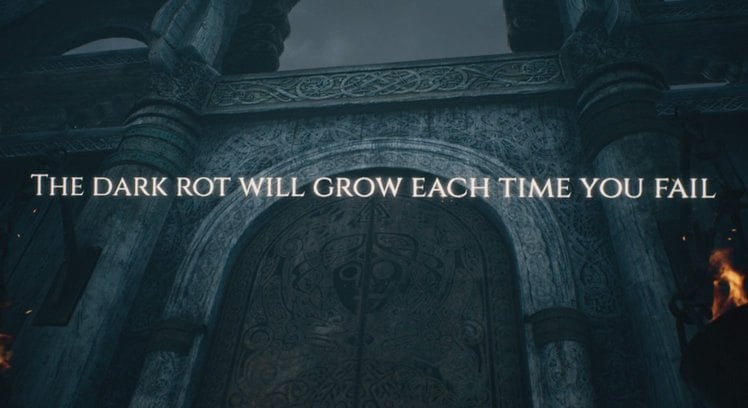 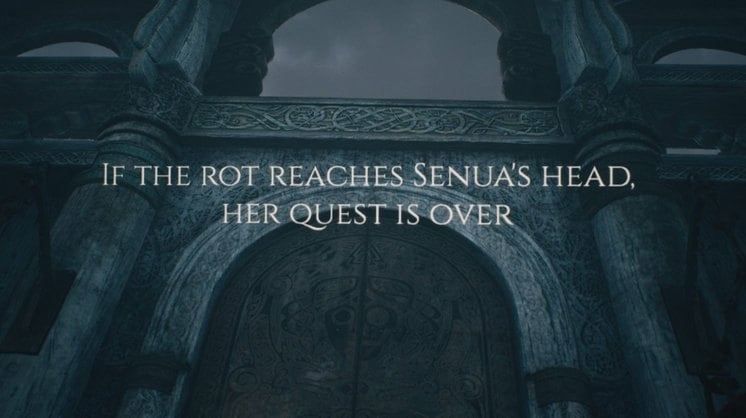 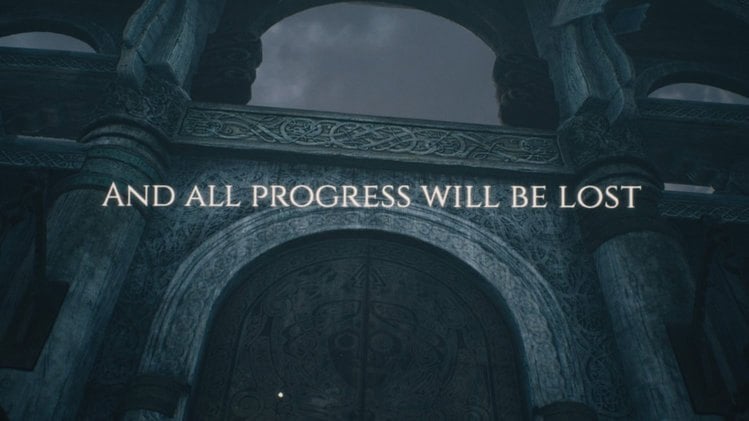 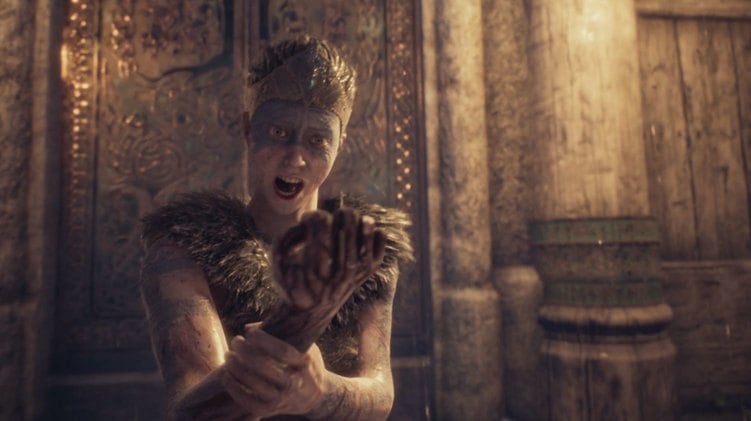 Yes, apparently Hellblade features a form of permadeath. Whenever Senua dies in the game, the rot on her right arm will gradually progress and if it reaches her head, your save files will be deleted. I have myself died a couple of times throughout the entire game but haven’t lost any progress (phew!). Some are even calling it a bluff but it seems like the progression of Senua’s rot is gated per section, progressing by set amounts in certain regions of the game and will stop progressing in others. Whatever the case, I’m still sitting on the fence regarding this issue. True, it is a turn off for gamers to learn from the very beginning that the game is so unforgiving with a mechanic beyond their control. At the same time, it raises the stakes, somehow bridging the gap between the virtual world of the game and the actual world, effectively keeping the gamer on edge to genuinely care for Senua and somehow empathize with her.

The battles are themselves initially fun and challenging with the easy and fluid controls, requiring you to masterfully combine attack, parry and dodge actions to come out victorious. If you take the pseudo-permadeath into account, then every blow to Senua becomes much more significant. However, with the several battles that you’ll encounter, they are somewhat predictable as Senua walks into a clearing that screams “battle arena”, face the same limited enemy types and the battles are left feeling more of the same with time. 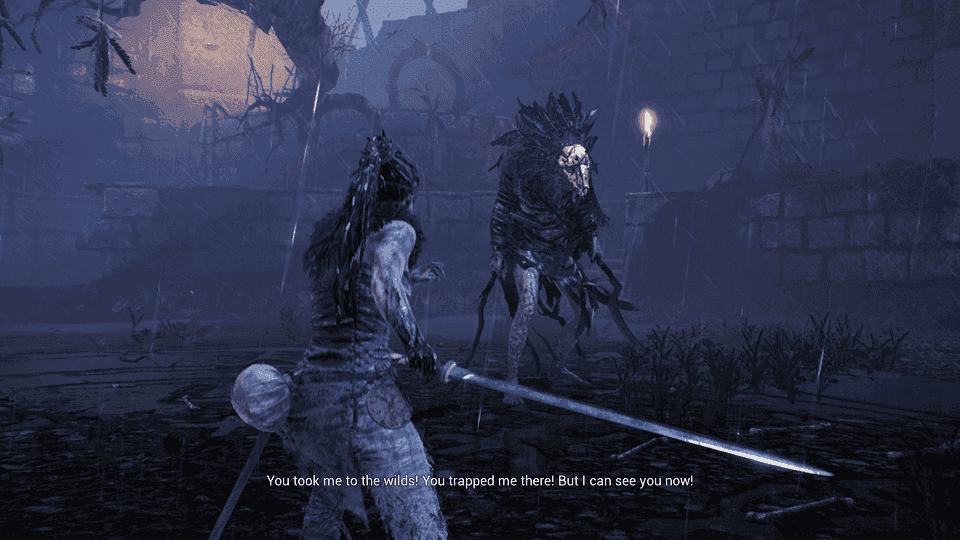 To further put the gamer in Senua’s shoes, Ninja Theory teamed up with people with experience of psychosis and professionals in psychiatry to assist in the representation of psychosis in the game. All throughout the game, voices keep whispering to Senua, at times mocking her, at others praising her and sometimes even helping her. It’s an interesting feature in a game to get the player to somehow understand what actually goes on inside the protagonist’s mind and it’s definitely best experienced with headphones for the 3D binaural sound effects. So be sure to plug in your best headphones to enjoy this title to the max! 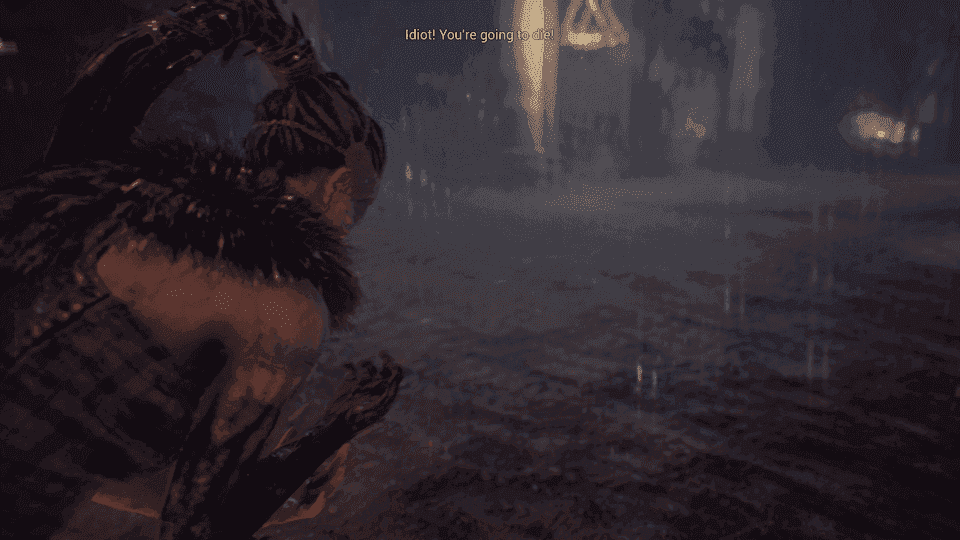 One of the few liberties the game enables is the ability to focus. By holding the Right Trigger, Senua will focus her gaze. It’s a major feature in the game as you can use it to activate a kind of bullet time during combats, get the runestones to narrate Nordic folklore (the only “collectibles” in the game that exploration rewards) and also solve those irritatingly frequent puzzles. 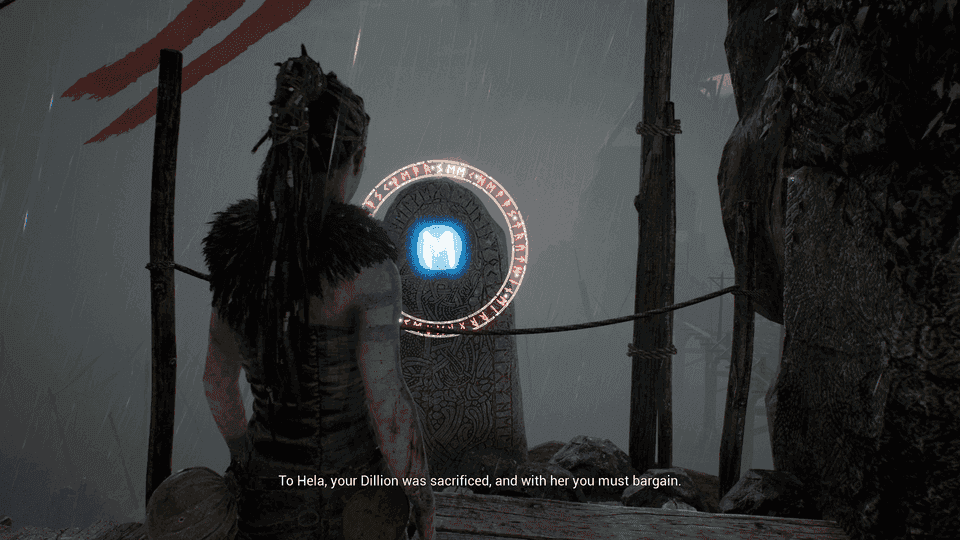 The puzzles will require you to use the Focus action to open magically sealed doors and gates, pass through portals to access previously inaccessible areas and pay close attention to some specific sounds that may serve as guides. The most frequent puzzle type you'll encounter basically works like this: focus on a sealed door to highlight some runes. In order to unseal the door, you’ll have to focus and find matching shapes in the environment and line them up. 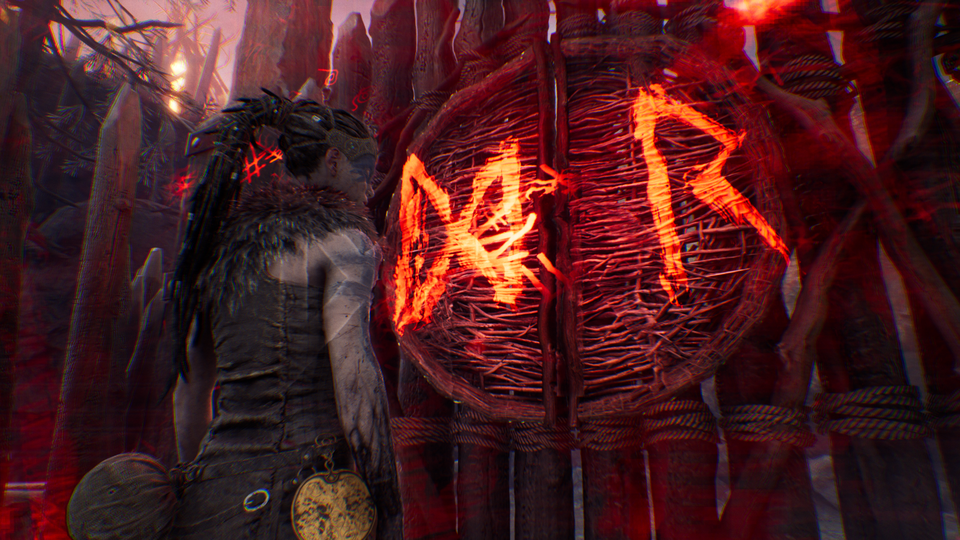 It’s an interesting puzzle mechanic that unfortunately feels overused to the point of irritation, with similar puzzle sequences appearing after almost every cutscene and sometimes requiring some careful scrutinizing of the environment to finally find the matching shapes. This is not to say that they are tough to solve; the game actually gives you visual cues whenever you're close to the matching shapes, but the shape-matching puzzles come up too often to the detriment of other, more unique segments. These are understandably aimed to mirror the optical illusions that recur in the medical condition but to be used to that extent in a game might not have been the best option.

The Focus function has some other, more fun application, albeit used less often. Like when hunting down Valravn, there are some “portals” that’ll open up previously inaccessible regions by walking through while focusing. This, of course, makes allusion to the fact that you're in the realm of Valravn, the God of Illusion.

A plank playing peekaboo through a portal

I’ve also enjoyed the sequence where Senua is partially blinded and has to rely on her hearing ability while focusing on sounds like waterfall and the breeze to guide her. 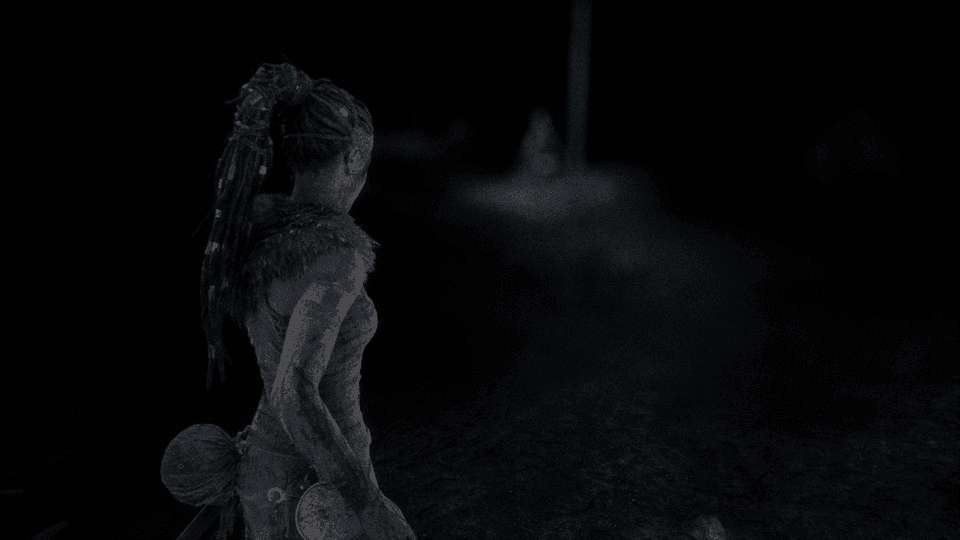 Your eyes won't help you here

The ability to focus is an interesting mechanic in Hellblade that is unfortunately inadequately implemented among repetitive puzzle segments and other, more unique ones.

The hardest battles are fought in the mind

Hellblade: Senua's Sacrifice is the fruit of Ninja Theory’s “Independent AAA game proposition” which “is about creating, funding and owning IP of AAA quality but with the more focused game design, lower price point and open development process that defines indie games.”

True to their word, they’ve created a visually astonishing title for only $30 with a small staff, implemented some interesting game mechanics to an interesting plot, all the while raising awareness about a medical condition that will leave you wondering whether Hellheim is real or just another manifestation inside of Senua’s mind... 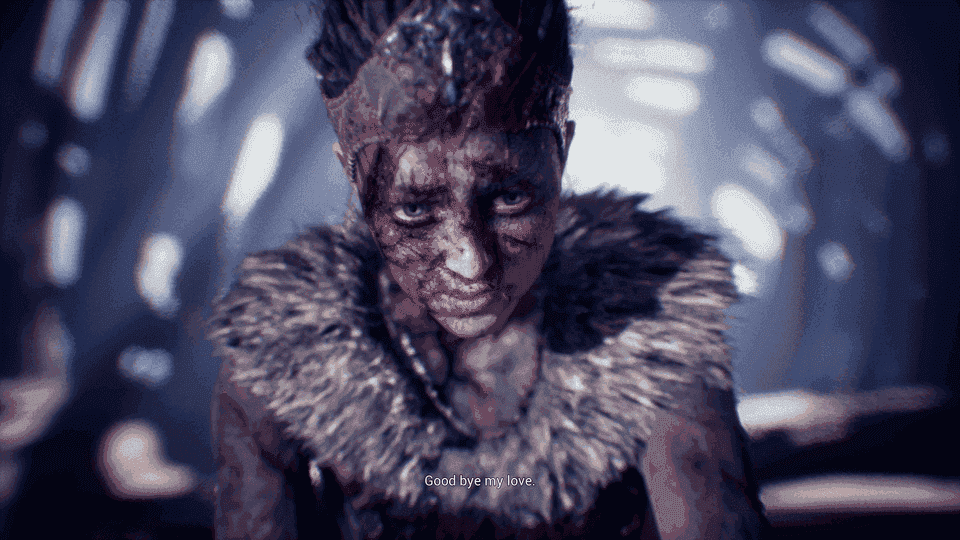