Up for review today are the Gunnar Torpedo 360s, blue light filtering “gamer glasses” that promise to “heighten focus and visual endurance, elevating performance beyond the competition.” Do they actually work? 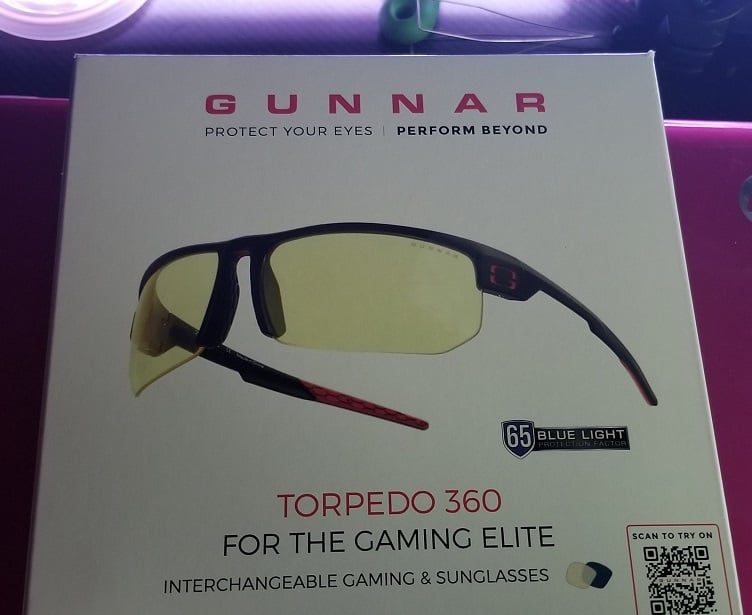 Blue light filtering glasses have become increasingly popular as our everyday lives are engrossed more and more by screens of various kinds. Back in 2007, Gunnar Optiks was one of the first commercial manufacturers producing blue light filtering glasses that were proven to “reduce digital eye strain” and protect you from Computer Vision Syndrome, even being endorsed by gamers all over the world as being able to “increase your gaming performance!” and other such claims. Now, in 2019, these blue light filtering glasses have popped up everywhere, and continue to promise the same thing. Up for review today, we have the Torpedo 360 glasses from the popular Gunnar Optiks brand. The first thing we’ll take a look at, as always, is what you get when you order your own pair of Torpedo 360 glasses.

When you first open the box, you’ll find the rather large case (or “zip up locker”, according to Gunnar), which is filled with a nice foam material to protect the contents of the case. Inside, you’ll find some quick guides on the product, a nice microfiber cloth, a lens cleaning kit, two different sizes of nose bridges (large and small), a pair of sunglass lenses, and the frames of the Torpedo 360 itself, with the “medium” nose bridge and the “65 tint” amber lenses already pre-installed. The first thing you’ll notice when you pull the frames out of the case is just how incredibly cheap and flimsy they feel. For $119.99, I was expecting maybe metal frames or perhaps some durable-feeling plastic at the very least, but I feel like I could snap these things in half without even trying, which is extremely disappointing. The next thing you’ll notice is how absolutely nerve-racking it is to change out the lenses. In order to remove the lenses, you basically have to just grab the lens and pull it down until it simply comes out of its slot, which on paper doesn’t seem so bad. In practice, however, you’ll feel like you really will snap the frames in half just trying to get these things out. It’s much easier if you pull the nose bridge out first, which is easily done by simply unclipping a little clip and pulling it off, but having to do this every time you want to swap lenses is rather annoying. Putting the lenses back into place is no different, you simply push the things up until they slot into the frames. All in all, I would honestly recommend finding your optimal config and just leaving it that way, lest you snap the frames or break a lens. Comfort-wise, I’m told by my wife (who wears glasses daily as opposed to me who doesn’t need them at all), they’re just about as comfortable as any pair of glasses she’s worn. Personally, however, I didn’t find them entirely that great to wear for extended periods, mainly because of the rubber grips located at the end of the temples. While they were designed so they won’t slip off your head when you’re doing that super intense, head-swinging gaming (aka never?), I found they mainly just rubbed the back of my ears in a rather annoying fashion. 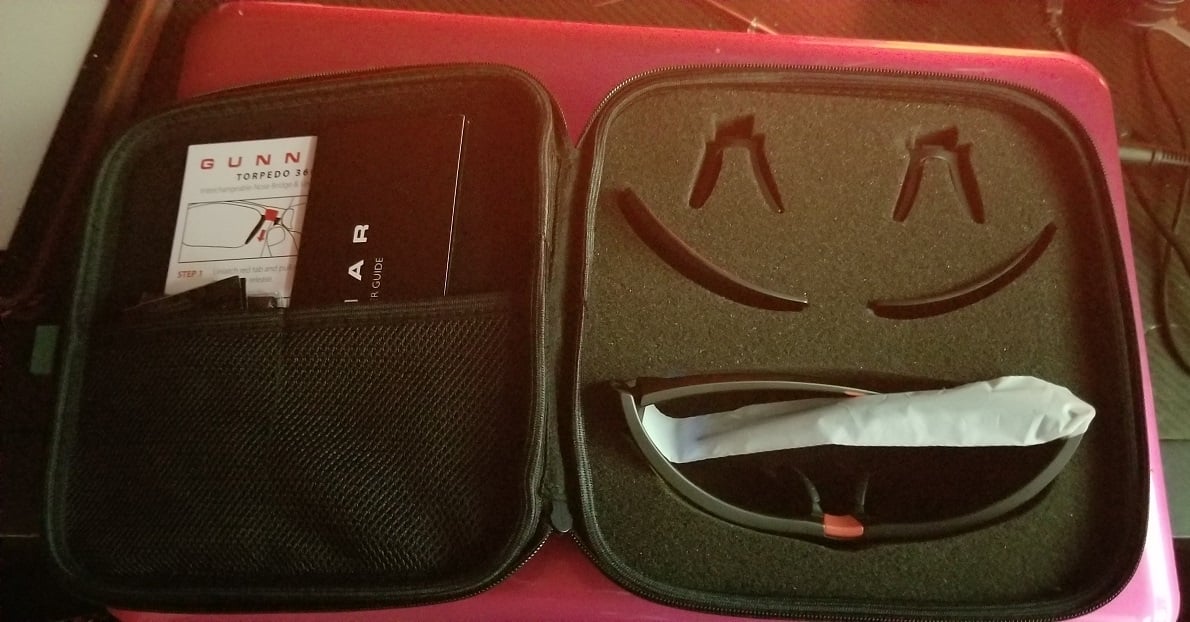 So how does this “blue light filtering” benefit you, really? Do these glasses really “heighten focus and visual endurance!” like they claim to? Well, to be frank, no, they don’t. Here’s the thing: blue light by itself probably isn’t really that harmful to the body. While you might hear that too much blue light exposure can damage your eyes, cause headaches or dizziness, or cause eye strain with too much exposure, the scientific community is actually rather torn on the subject itself. Some scientists claim that there is no scientific basis that any of the above is actually caused by blue light itself. After all, the sun emits more blue light in a day than any lightbulb, screen, or other light source that you’ll encounter in a given day combined, so surely just being outside for an hour is worse than being inside staring at screens all day, so just don’t go outside! Right? Well, again, no. The actual cause of most of the symptoms you’ll usually see associated with blue light is something called Computer Vision Syndrome. The real issue is not the color of the light you’re viewing, but simply the amount of time you spend focusing on a singular, lit object. It turns out that focusing your eyes on an object producing lights that’s a foot or two away from your face is actually really bad for your eyes and can cause, you guessed it, eye strain that can lead to headaches, blurred vision, fatigue, dry/irritated eyes, etc. To actually help fix these issues, all you really need to remember is the “20-20-20” rule: for every 20 minutes you spend staring at a screen, look at an object 20ft away for 20 seconds. Something as simple as that is shown to drastically reduce eye strain, to the point where most of the above listed symptoms will generally disappear (or lessen, depending on how much time you spend staring at screens and how healthy you are in general).

Then, does this mean Gunnar and all the other amber tinted glasses manufacturers are selling snake oil that doesn’t do anything at all? Actually, that’s still a no. While they won’t reduce eye strain on their own or “heighten your focus” to make you a better gamer or anything silly like that, some recent studies have shown that amber tinted lenses can help people who have issues with their circadian rhythm, which can lead to a better sleep schedule for those afflicted with some sleep disorders. Is it effective for everyone? In my experience, no. My general sleep schedule is pretty awful, and has been since I was ~14 or 15; I wake up around 5:30am and get into bed at ~9-10pm. I don’t actually fall asleep until sometime around 2am, spending most of my time in bed reading until I feel drowsy enough to fall asleep, and wake up two or three times a night for seemingly no reason. For approximately 2 weeks, I wore the Gunnar Torpedo 360s for the majority of my day, from 9am when I start work (staring at five monitors at any given time) to whenever I happen to go to bed, and absolutely nothing changed with my sleep schedule. I still spent most of my time wide awake and alert, resorting back to my usual reading after an hour or so trying to fall asleep naturally, and I still woke up in the middle of the night and I still woke up just as early. Now this doesn’t necessarily mean these particular glasses might not help others with their sleep issues, but I simply found no benefit personally to wearing these glasses at all in any way.

So are they worth getting? With an MSRP of $120, absolutely not. The build quality of the glasses alone is simply unacceptable at this price point, and the supposed benefits of the glasses can be achieved for free with good ol’ fashioned “looking at something else.”