Single player
Local Multiplayer
Online Multiplayer
Co-operative
Guild of Dungeoneering is a turn-based dungeon crawler with a twist: instead of controlling the hero you build the dungeon around him. Using cards drawn from your Guild decks you lay down rooms, monsters, traps and of course loot!

Guild of Dungeoneering takes the turn based dungeon crawler formula and infuses it with some fresh ideas to create a fun and original experience. The fresh ideas being the addition of card based mechanics and combat that allow you to lay out your own dungeons to explore in order to complete each dungeon's objectives. Along with its simple but distinctive art style and an amusingly catchy musical score, Guild of Dungeoneering is a deceptively simple game with a lot of charm. At the core of the game is a base management element, which consists of building and expanding your Guild. This is how you unlock new classes of heroes with upgraded abilities and expand the pool of loot and weapons available to you when you are in dungeons. You unlock extra sections of your guild by purchasing them with the gold you gather in dungeons by defeating enemies and completing objectives so it is in you best interests to keep the game challenging to get the most out of your runs. Sadly other than buying and slotting on extra sections to your Guild there is no real depth to the base management element of the game. You just add an extra section to your Guild once you buy it and then you do not need to think about it again until you have earned enough gold to buy another section. This is a shame as slightly more depth in that area could have really elevated the game and made it more compelling in the long run. 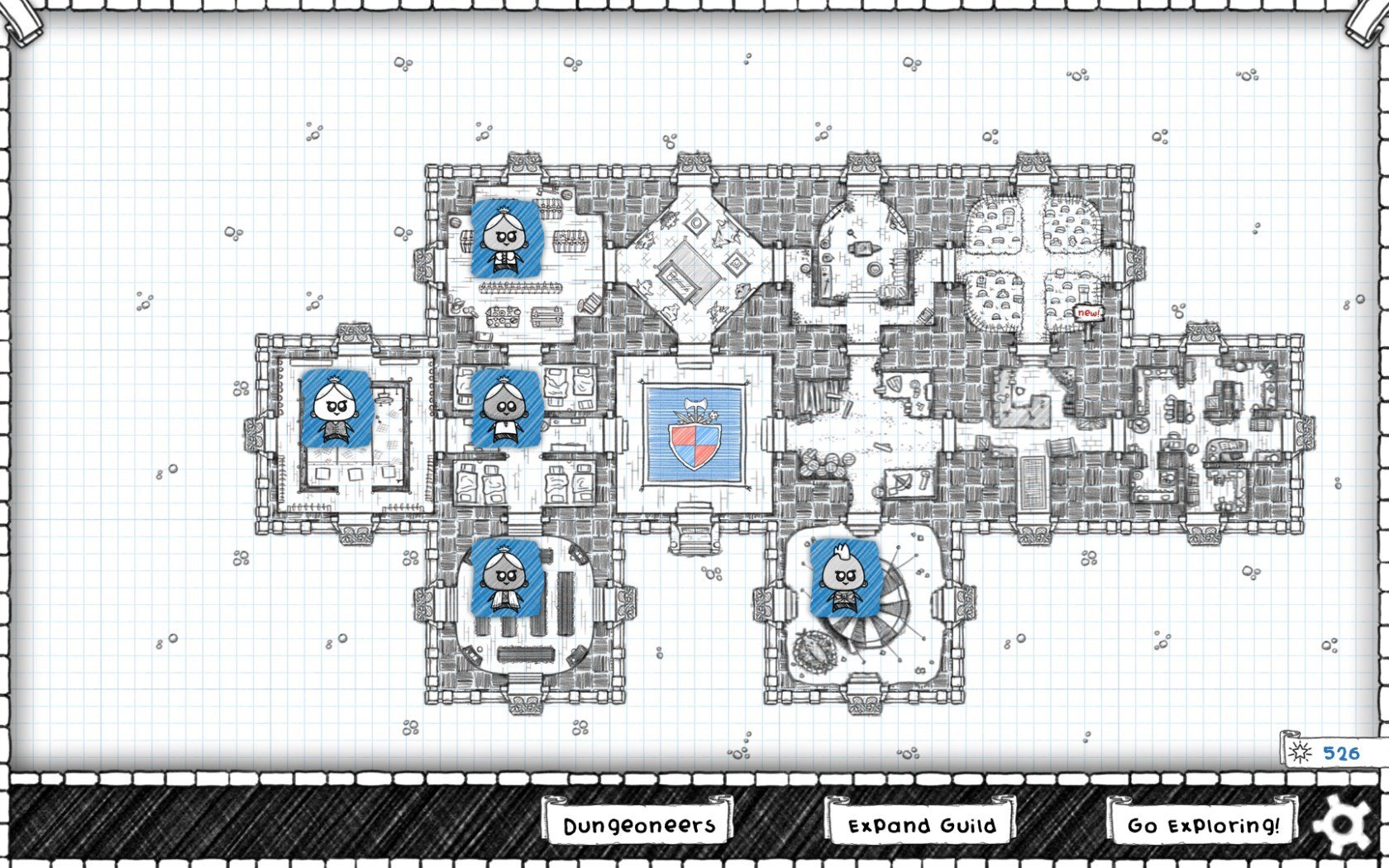 There is a large variety of classes of heroes to unlock, from warriors, to mages to thieves and more, the difference between them in-game being the pool of cards available to them in battle and some passive buffs that they have. The items you equip to yourself as you explore each dungeon further expand your deck with new more powerful cards while at the same time you passively level up and gain more health and so on with every battle. As you progress in game an earn more gold you can afford to unlock higher tier characters and loot that you can find in the dungeons. The different loot you unlock in your guild and find in dungeons unlocks further cards in your deck in-game. However progression only lasts for one dungeon, any loot you find and any levels you gain for a particular character get reset when you finish a Dungeon and of course when you die. This is a shame because it means you fail to grow an attachment to any of your Dungeoneers as they go out into the world, however there is a benefit in that when you die , and you will die often, it does not feel like you have lost any progression which would have added a lot of frustration to the experience. 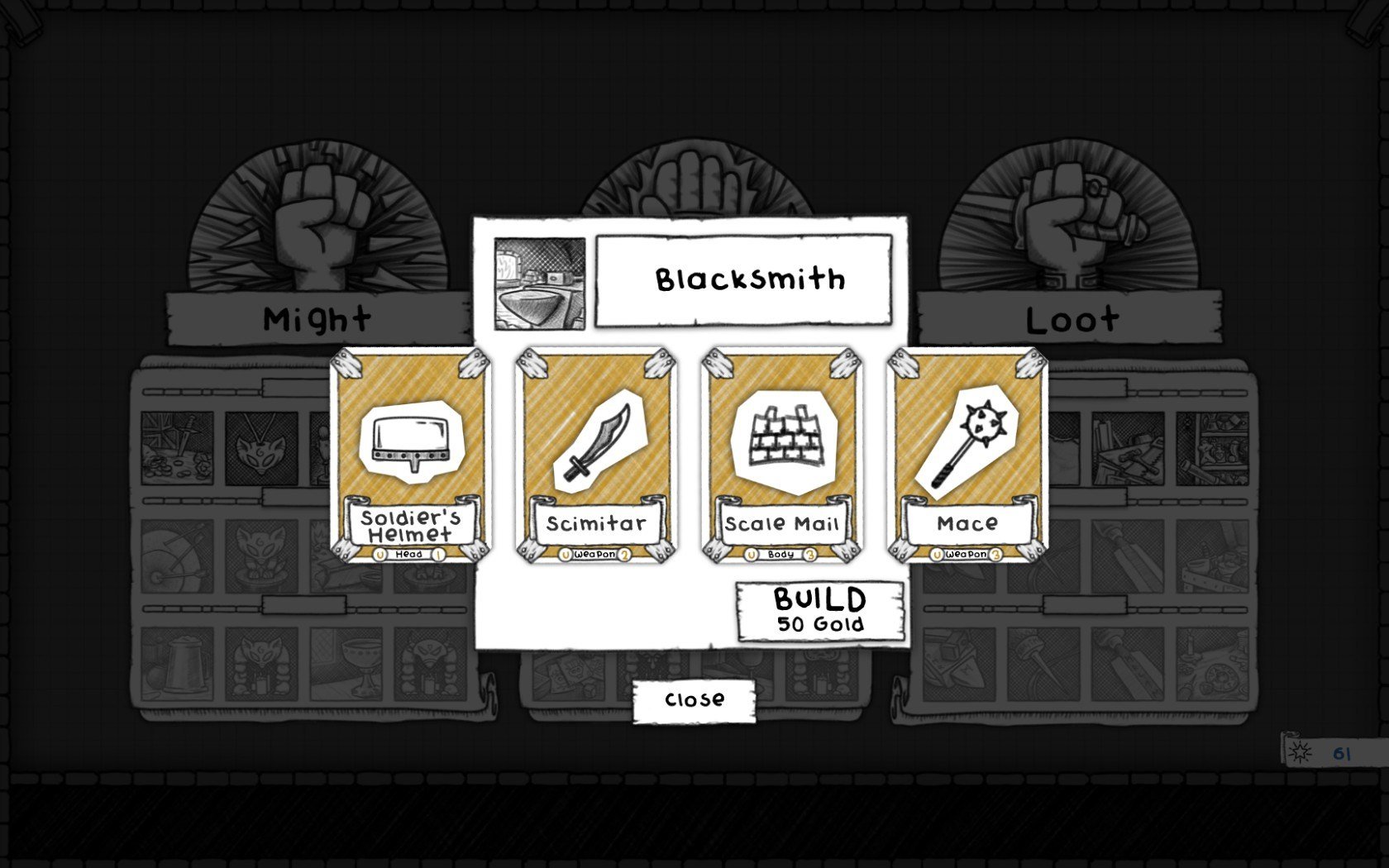 The enemies you battle come in many different varieties too consisting of the usual fantasy fare of goblins, spiders, snakes and so on. The end of dungeon bosses are a lot more exotic and unique compared to the regular dungeon creeps, you even encounter mythical monsters such as Medusas, minotaurs and more which keeps things nice and varied on the aesthetic level. The character design for all of your foes being very distinctive and pleasing to the eye even for the regular mobs. However combat between the variety of enemies that you will face can feel slightly repetitive due to the fact that they all share the same pool of cards for the most part. If your enemies had access to some unique cards with unique abilities depending on their character and class it would have given the combat an extra level of depth and strategy that would have only elevated an already fun game. Even the powerful end of level bosses for the most part share the same card pool you will be familiar with. Luckily though they are uniquely designed and quirky enough to keep you wanting to explore more and to see what you will have to contend with next. 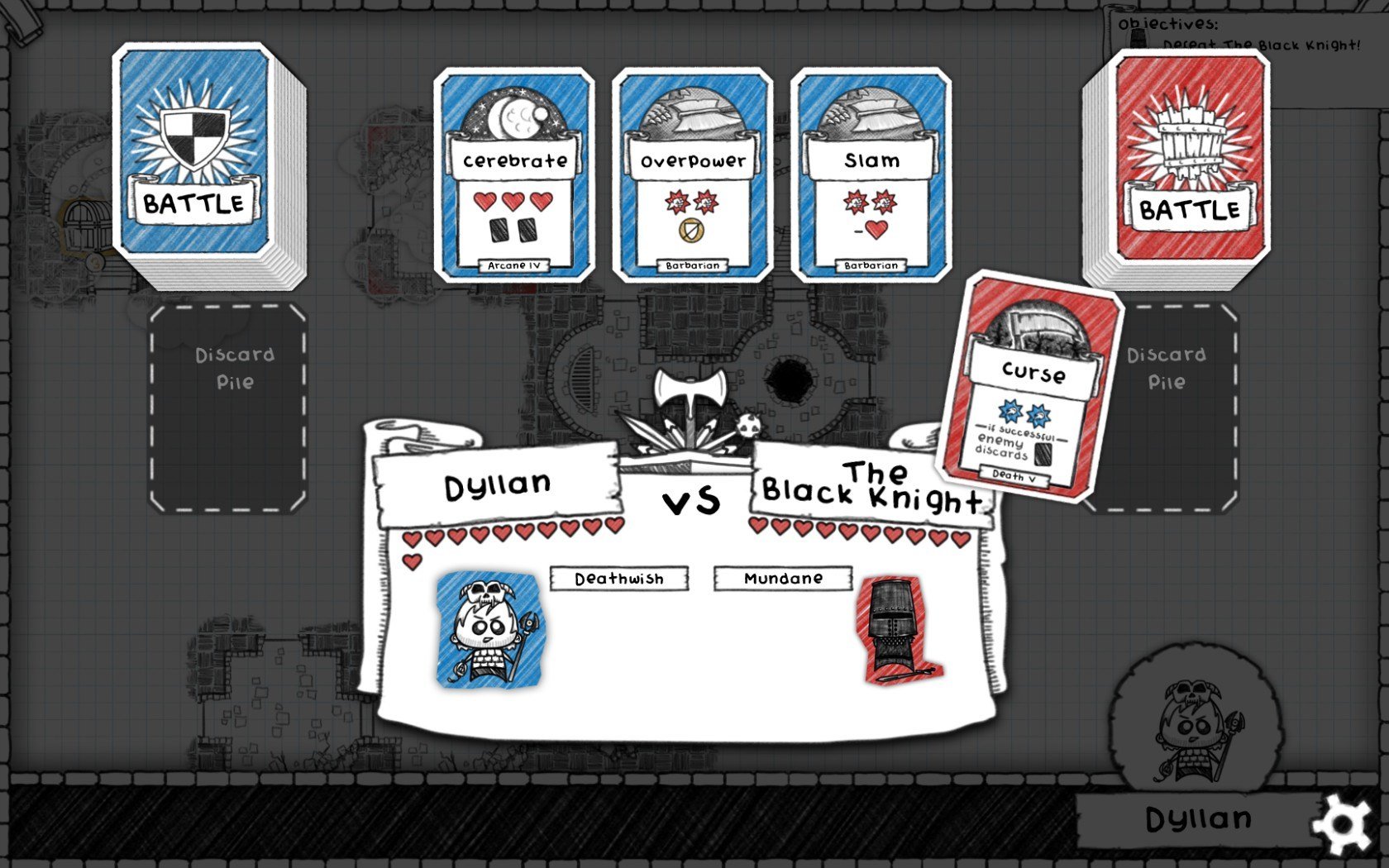 At the start of each turn you are dealt a random hand of five cards which may contain dungeon pieces, loot and even enemies to allow you to construct your own adventure.  Despite the fact that you can create your own dungeon in game the game is by no means easy because of it, you can't just make a dungeon full of loot and no enemies and walk to the end. In fact you will find yourself dying many times in-game as you battle your way through each quest partly thanks to the luck of the draw and partly due to the in-game AI. It is essential to fight your way through each dungeon and to make things difficult for yourself in order to raise your level, gain powerful loot and to build up your deck in order to face the final boss that waits for you at the end of each quest. A lot of the time you will fail because of the luck of the draw, or because you are forced to face an overpowered enemy to soon because you have no real control over where your character will go. But as I said you will rarely feel that frustrated because there is no real penalty in death and because even the larger dungeons do not take much time to complete. Also although you have no direct control over the path that your character takes for the most part he will take the path you intended and you can usually bait them with loot so they go where you want them to. 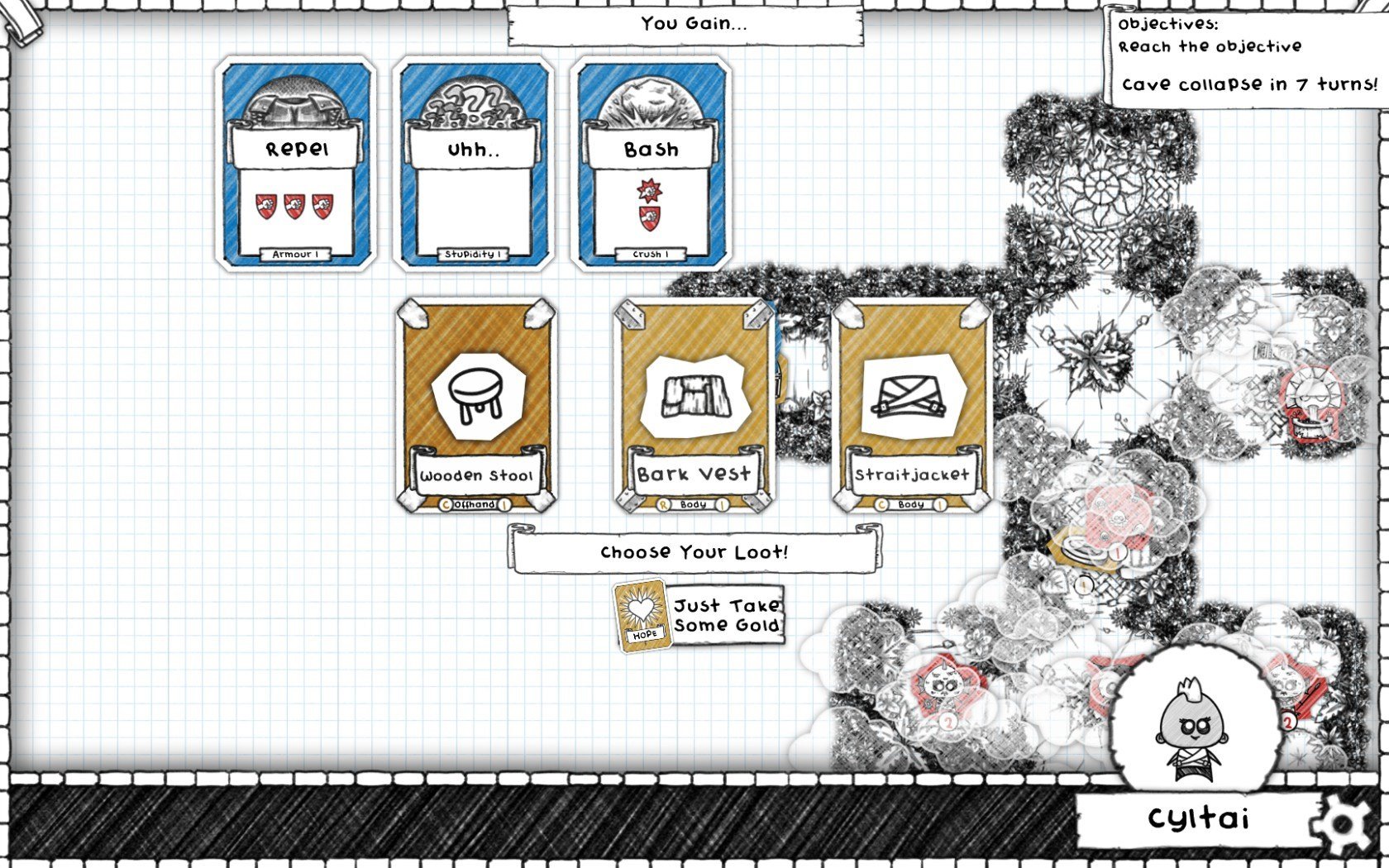 The combat system itself is straightforward and fun and very easy to get to grips with quickly. Although it is by no means very deep there is strategy to be had in how you expand your deck per Dungeon and in battle. The different items of loot you attain as you traverse each dungeon add extra cards to your deck and although loot drops are random you can usually build a fairly consistent deck to survive the Dungeon. When you walk onto the same square as an enemy you will enter combat mode where you and your enemy are assigned random cards from your respective decks each turn, the number of cards you receive can vary depending on any buffs and charms you have but generally it will be three. There are two classes of main attack cards available to you, those being red physical attack cards and blue magic attacks cards. Along with those two types you can have cards that block certain attacks, force your enemy to discard a card, grant you extra health and more. Later on your more advanced and powerful cards will often be a mix of different attacks, defenses and bonuses meaning that you do feel yourself becoming more powerful as you progress. Each turn you play a card from the hand you are dealt and the objective is to reduce your enemies HP to zero. Very simple as I said and perhaps too simple for some, but as a fan of fairly complicated TCG's I find the combat enjoyable despite its simplistic nature even after playing multiple hours of the game. 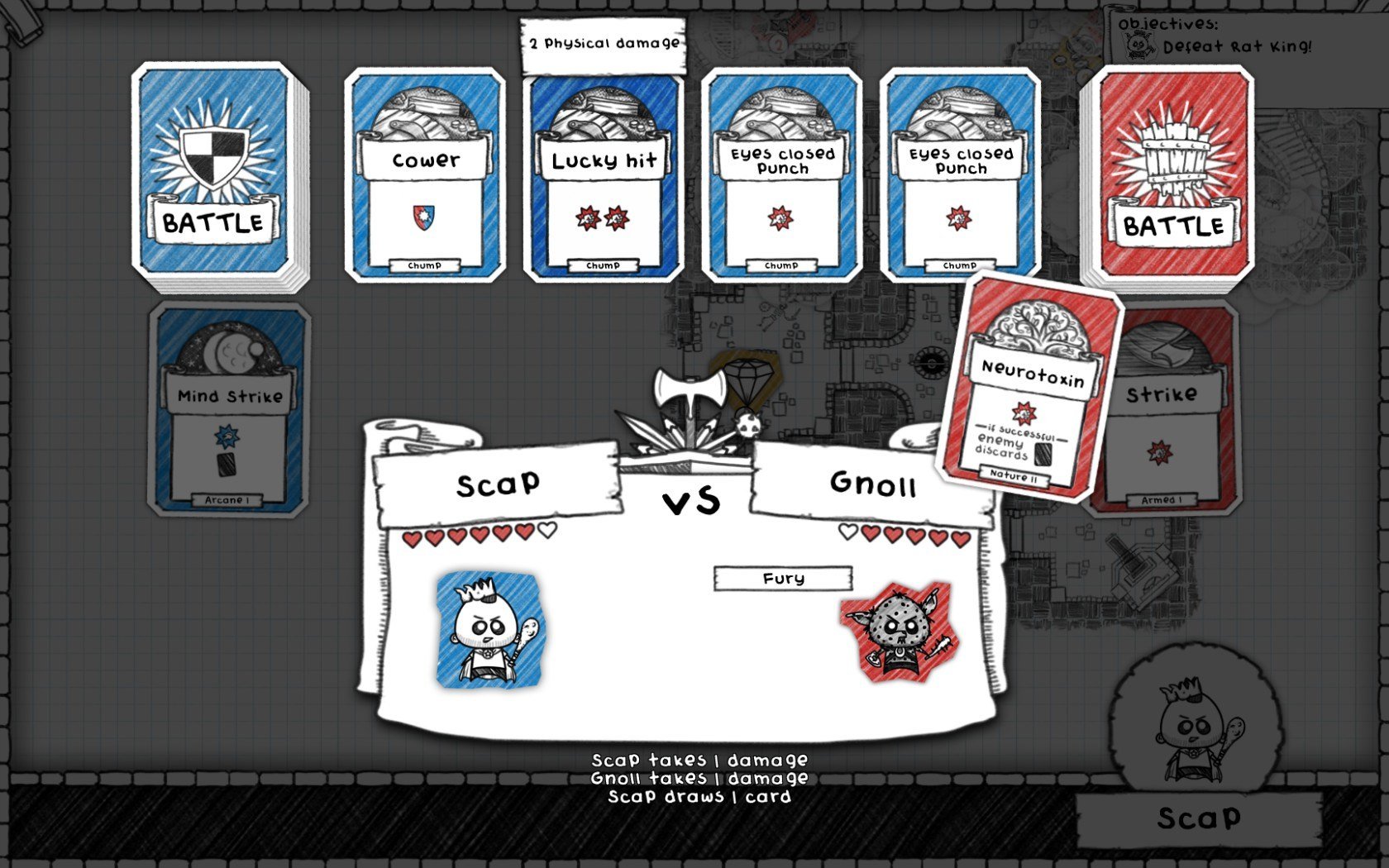 Lastly I want to touch upon the art style and music in-game which I consider to be a highlight of the experience that really does elevate this title. The art style consists of a hand drawn doodle like aesthetic that really suits the game and is very distinctive and attractive. All of the creatures you encounter have a lot of charm to their design and the dungeon and guild pieces all have subtle flourishes to them so they are not too simplistic to look at. The music is also really well done with catchy and ambient tunes to enjoy. The highlight of the whole game though and what really ties a ribbon on the experience is the Bard style singing that plays at the end of each dungeon and upon death. The Bard type singing is contextual based upon your success and is always witty and amusing.

What We Liked ...
What We Didn't Like ...
7
Gameplay
The gameplay takes a simple rock, paper, scissors approach to turn based card combat but nonetheless offers a decent degree of depth and tactics in its battles. There is some strategy to apply in battle and in planning the expansion of your Guild but overall luck can be the predominant factor for victory. Nonetheless there is a good challenge here and after multiple hours of play I still found the combat fun and came back for more.
8
Presentation
Guild of Dungeoneering has a nice simple art style that is distinctive enough to stand out from other games. The catchy in-game music never outstays its welcome and the Bard type singing in between levels is amusing and fun. It is hard to resist the games simple charms and it is a good example of less equaling more.
7
Lasting Appeal
With plenty of classes of character and different loot and ability cards to unlock you will not see everything Guild of Dungeoneering has to offer on your first or even second playthough. However some may not be compelled to replay the game due to the fact that it lacks depth in some areas. Also a lack of a multiplayer component is a shame but despite that you will definitely get your moneys worth out of the games cheap price.
7.5
out of 10

Guild of Dungeoneering is a simple yet very well executed game with a variety of unique mechanics and a lot of charm and character. If you are into Dungeon crawlers of any type the game is definitely worth checking out. However the title may be a little too simplistic and lacking in substance for some, while others will appreciate the fact that it is easily accessible and is the type of game you can easily dip into every once in a while without needing too much investment. This is a title I would definitely recommend to fans of the genre and for those looking for a fun simple game that they can dip into and have a lot of fun with every once in a while.
Reactions: CathyRina, Sword87, Ryukouki and 1 other person
Share:
Facebook Twitter Reddit Pinterest Tumblr WhatsApp Email Share Link
Mmm, same idea than Dungeon Maker for DS, but the battle gameplay is interesting. Seems too focused on luck, tough.
Lol the artstyle is amazing guess worth a pretty penny.

@ godreborn: I have a hard time aiming in games like fps unless there's a lock on. I beat the sling shot and... A moment ago
Chat 3