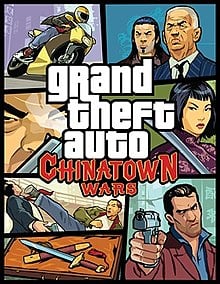 This game is a game which I have wanted to play for years, as I have heard great things about it. I bought it about a year ago, and I can finally say that I did everything the game had to offer. I will only be looking into the facts, as I have no nostalgia from this game.
GTA Chinatown wars is an Action RPG created for the Nintendo DS, but due to poor sales, it was released on PSP and eventually Android - IOS. The question is how does it hold up in 2021, and how does it compare to other GTA games. I will separate my review into 6 parts. 1: Controls 2: Gameplay 3: Graphics 4: Content 5: Storyline 6: Final thoughts

1: Controls: Character movement on the original DS to the DSI are with the directional pad, this is Great due to the overhead perspective, but you could play it on the 3DS for a slightly improved movement. The a button controls are standard, and never gave me any issues. The Touchscreen was used for the PDA - the most informative menu found in any GTA game. In this game you have to break into cars by playing an awesome little minigames depending on how new and expensive a car is. From moving the finger in circles to break into a large Yankee to tapping at the right time to hack into a new Cognoscenti, this is an awesome touch that makes cars feel more realistic compared to other GTA titles. The bottom screen has a very useful map with GPS and many other neat features that are accessed with the touch screen and you use the touch screen to aim grenades. As a bonus, you can call a taxi by using the microphone... A nice touch.

-Breaking into a car with a screwdriver!

2: Gameplay: The gameplay is overhead, many people really did not like this new viewpoint and it is probably one of the main reasons it sold so poorly. I think that is was one of the best things about it though. It really worked well because they could shorten the draw distance and still keep all the content in game. It does admittedly cause some issues when racing, as it you can drive faster than the game can load sometimes. But this does not happen enough to damage the experience too much. The gameplay includes the new minigame to break into cars, which as I said before is awesome. Another thing they added was a new wanted system. When you get a wanted level you can lose it by destroying police cars that chase you, the more stars you have, the more police you must take out. This is super fun, and it makes you want to drive smart, and make those police crash and explode, while you lose your wanted level! Oh wait, there's more! You can buy and sell drugs and make profit from buying cheap and selling expensive! This is one of the best ways to make money, and there are many ways to do this, like stealing drug vans or stealing from a drug base, and selling it to drug dealers for tens of thousands on dollars! Also, when buying drugs, there is a chance that you will be ambushed by police, and if you are busted your drugs are taken away. So tactical drug dealing with a Banshee to your right is advised! Everything from GTA 4 is back, with Taxi rides, to 90% of Liberty City all there including happiness Island!

Now to the negative: The 3DS and the DS Lite have the same Processing power on DS games, yet this game was intended for the DSi, which had a slightly better processing power, so FPS drops on the OG DS, DS Lite, and any 3DS - 2DS should be expected sadly. Luckily, if you are a 3DS user who is willing to mod your console, this you can use Boot9strap to bring it's FPS up to 30 without any FPS drops! The game does have a good few glitches - nothing game breaking, but they can be annoying.

3: Graphics: Graphics are very opinion based, but one of the coolest things exclusive to the 3DS version of GTA Chinatown Wars is the excellent Cell shading. In my personal opinion, the cell shading really makes up for the low resolution, but honestly, it's all opinion based. Here is a video to to see the graphics on PSP vs DS, and remember how much smaller the screens are. https://youtu.be/U34_Kp2tt1Q

Content: It has lot's with over 10 hours of story, and yet, unlike most GTA games, there is still much to do! From stunt jumps, to side missions, to drug dealing. The ability to buy so many properties and buy your own cars. There are rampages, street races, gun clubs, and even a hobo war (Hobotron) you can take part in! I have played for over 60 hours racing Go Karts and killing hobos and it never got boring with all the content! I LOVE IT!

Story: Story is very different, as it is presented more like an animated slideshow, but it carries the awesome cell shading and it really goes will for the game. It has a multiple boss missions, and no mission was boring. They are often on the easy end though, but fun nonetheless. I don't want to spoil any of it, so I can just say, that the story holds up very well.

Final Thoughts: This is a special game, I played nearly every GTA game starting with GTA 2 to GTA 5, yet this one is really special. It lacks some polish, and the resolution can sometimes feel a little lacking, but this is THE BEST DS game ever made. I would say the DS version is the best due to the improved mini games that phones and the PSP lacked the same quality of , and the cell shading which really makes it look like the resolution was not too much of a limitation and more of a style they went for. This game deserves a strong 9.7, with only a little polish holding it back, If you get this on the 3DS with Boot9strap, then you can play the game the best way possible. I hope you like this review, and PM me if you have any disagreements with this review, I am here to offer everyone the best review possible, so I would love to hear you input!
Verdict
oriongrant and E1ite007 like this.
Like this review