​
The story in Grimvalor is very light. It takes place in the lost kingdom of Vallaris, a world overrun by monsters and secluded from the rest of the world. When the monstrosities started appearing outside of its borders, warriors from a neighboring kingdom were sent to investigate Vallaris, track down the fate of its lost king, and put a stop to the monstrosities. This is the extent of the story that you’re given before you’re set free in the world of Vallaris. It’s not much, but it does let the gameplay shine through as the key focus of the game. It almost feels reminiscent of older, more retro games in that way.

​
Beyond the exposition in the beginning, there’s some books and notes you can find throughout the levels that give a small amount of world lore and information about different monstrosities, usually about an upcoming boss. Beyond that, there really isn’t a ton of extra story here. You meet three different characters along your quest but they mostly serve just to progress you forward to the next level, rather than flesh out the story. It’s a bit disappointing as there was definitely some potential for a bit deeper of a story here, but for what we get, it works. 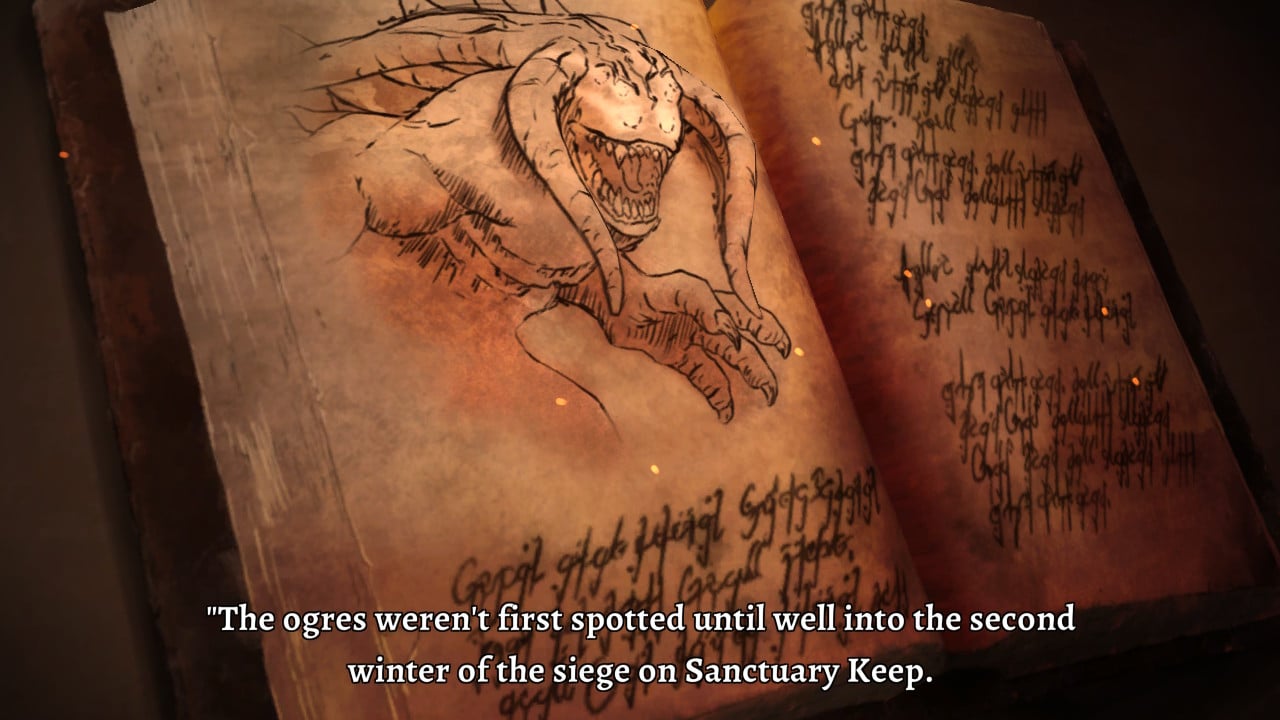 ​
Graphically, it’s not great. The character models don’t look very good, and in cutscenes it all becomes clear that this was a mobile game upscaled for a console. The world itself looks really good most of the time, the colors and art stylization really help to mask the graphics. The game is also fast paced enough that you don’t dwell on anything long enough to take real notice of how primitive it looks. That said, just because it looks dated doesn’t mean it doesn’t look good. It’s still a colorful and imaginative fantasy world, but the graphics don't do the concept justice.

​
Gameplay is the highlight, even if it doesn't do anything revolutionary--it’s an action platformer with RPG elements. You slay monsters, fight bosses, and explore the world. Grimvalor’s developer Direlight makes the claim that the game’s controls were optimized both for touch screens and console controls, and this is definitely accurate. The controls, while simple, feel very natural on the joycons, and never once felt like it suffered from originating on touch controls. Combat is pretty standard hack and slash, rushing monsters and mashing the same button until they die. You carry two weapons, and you’ve got two different types of attacks you can make, a light attack and a charge attack. The light attack is your standard hack and slash attack, while charge attacks consume energy you collect as you defeat enemies to perform special moves. The moves deal more damage and can be upgraded by acquiring trinkets. Trinkets are items you collect through the game that give your character new abilities that they can use in combat. Each charge move has an associated ability that you can add to it by acquiring a trinket. While simple, this combat is very fast paced and satisfying. 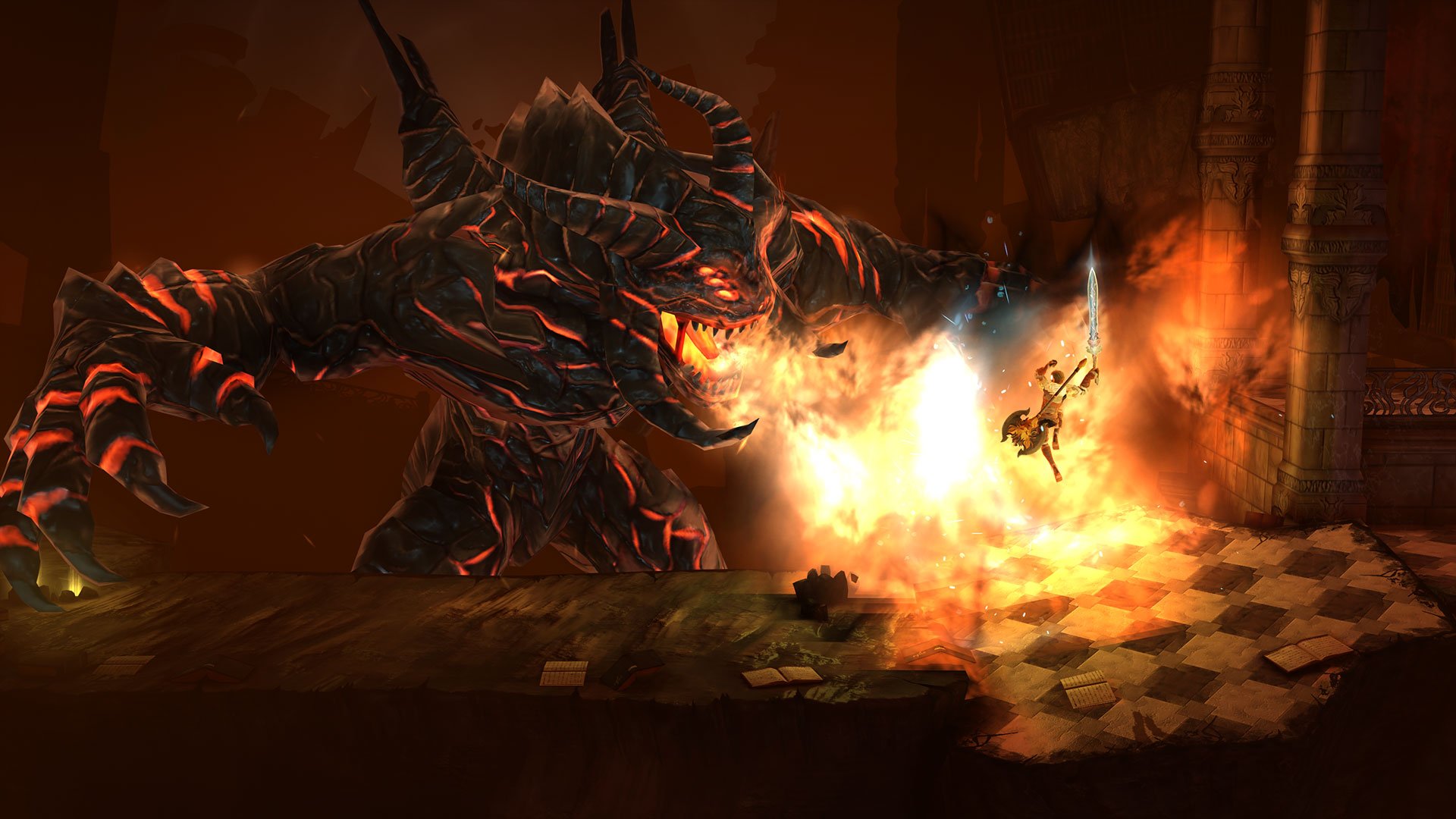 ​
The RPG elements mostly come in the form of your character's progression. You collect soul shards throughout the game, which act as both as a currency and as EXP points. You spend soul shards to level your character up, and increase 3 of your 4 stats. Outside of this, you can use the soul shards to purchase and upgrade trinkets from the in game merchant. It’s an interesting system that I honestly wasn’t a fan of at first, but the more I played, the more used to it I got. It definitely requires you to think it through before you spend anything, and weigh the options of if you want a new ability, or just to level up your core abilities. Soul shards are gathered through slaying your enemies, which respawn every time you enter the level, so it doesn’t require a lot of grinding to rack up enough to upgrade yourself. You can also use the currency shards you find in-game to purchase new weapons, giving an extra layer of customization. 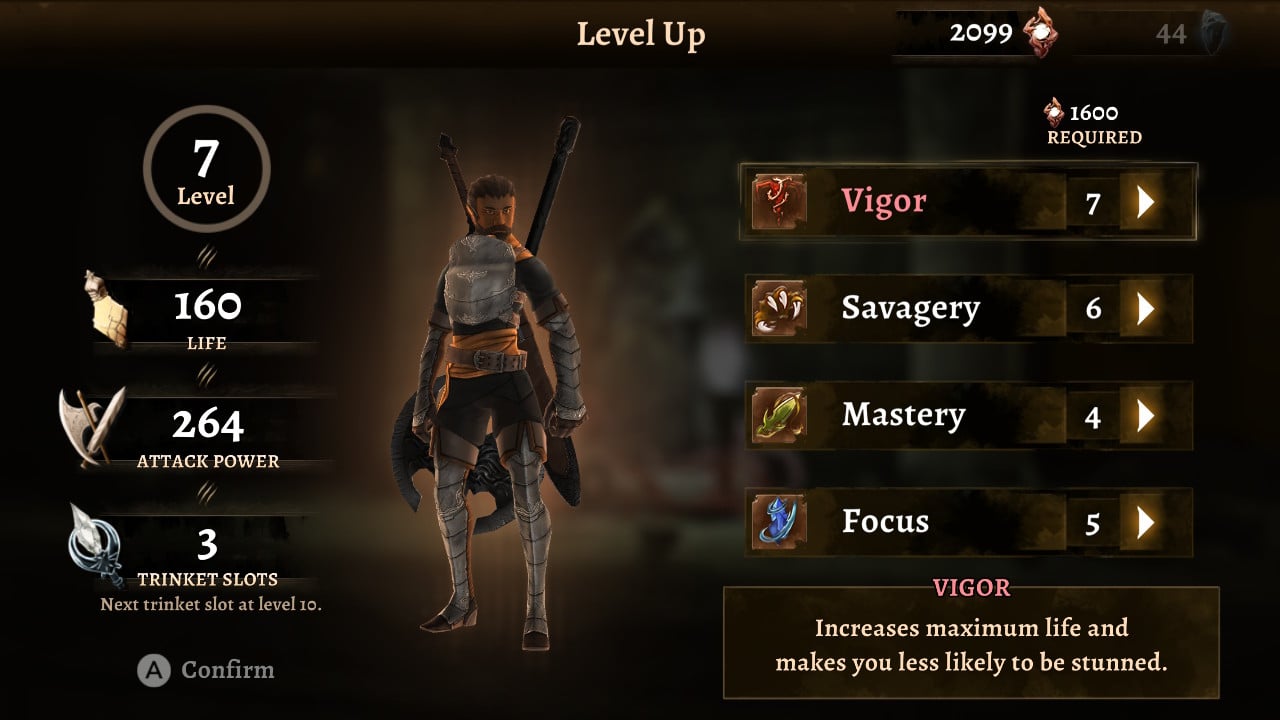 ​
While progressing through the game, you’ll find that it’s fairly linear in terms of getting to the next plot point. This is unsurprising as a side scroller, but there are some branching paths you can take by exploring each map. The game doesn’t hold your hand, and it’ll absolutely let you wander into an area you’re ill prepared for. This gives a natural incentive for you to explore the branching areas beyond simply gathering quest items. Exploring nets you extra soul shards and currency so you can upgrade your character, and be ready for those tougher encounters. There isn’t much to explore, but at least there’s a reason to do so. 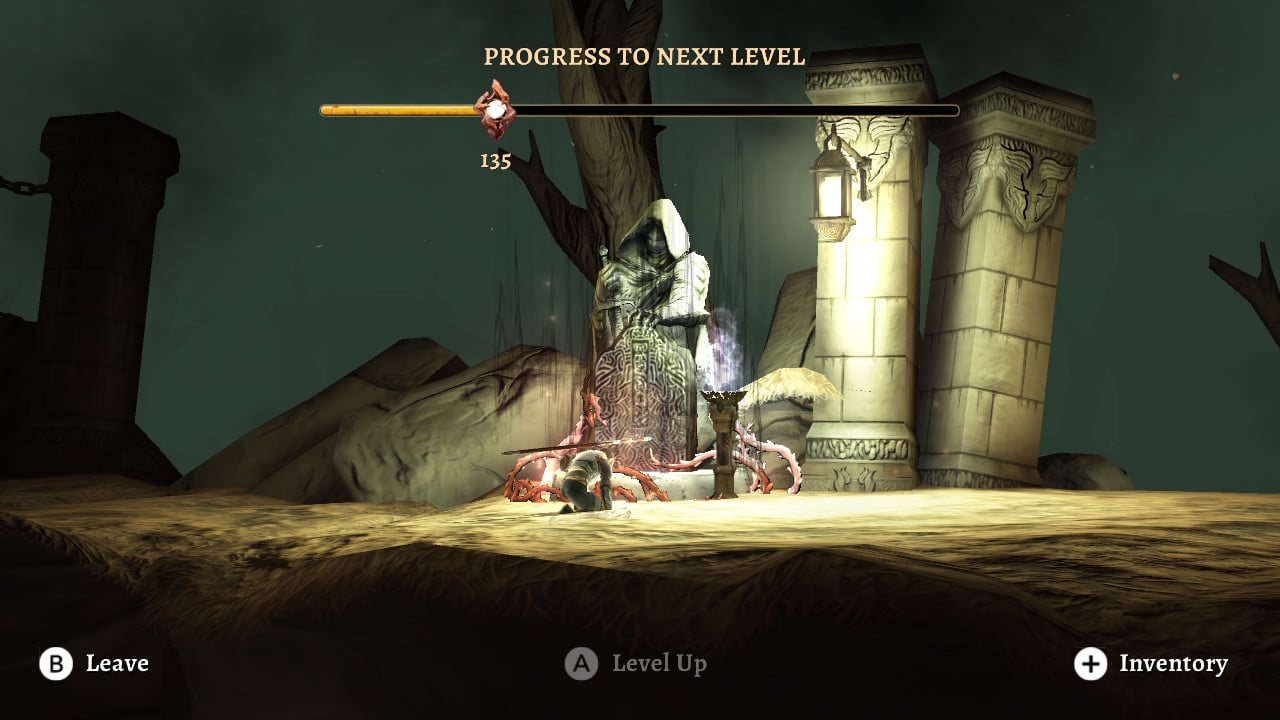 The in-game map shows you each path you can take when you enter a new section, and how many treasure chests, quest items, and loot piles you have to collect before completing it 100%. Through the in-game hub areas, you’re also able to fast travel back to sections on the map you’ve already completed, so you can definitely move on and come back later if you need to. I do have a small gripe here though, in that the map only shows you which section you’re in and a roadmap of the act, rather than there being an individual map for each level. A level map isn’t immediately necessary, since it’s a fairly linear sidescroller, but there are some levels that were a bit confusing to me as I explored them, and a level map would’ve helped a lot with that. 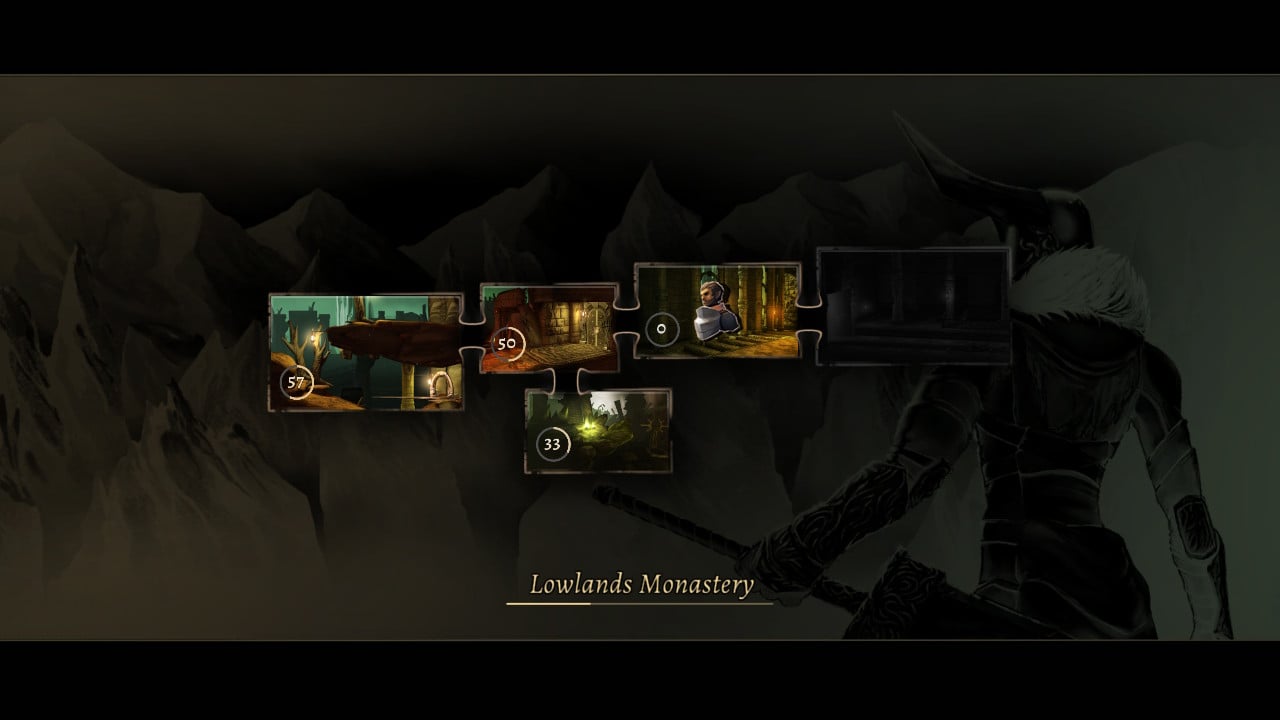 After you complete the game, New Game+ is unlocked, giving an extra challenge to strive to complete after the main quest has been completed. It’s pretty standard, just allowing you to replay with your end of game equipment to face harder creatures and bosses. It’s a welcome addition, as the game only took me about 10 hours or so to complete including exploring to get 100% on most of the levels. It’s not a long game by any means, but this gives a reason to come back and test your skills against stronger opponents. 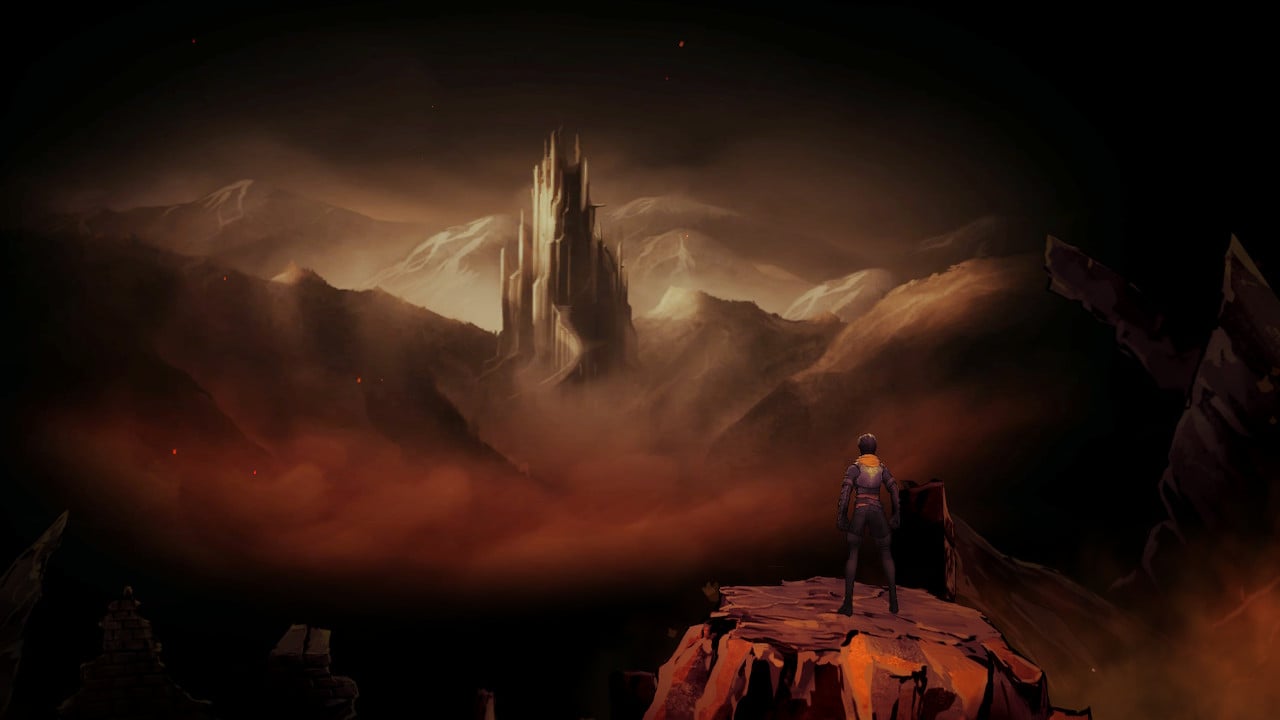 What We Liked ...
What We Didn't Like ...
8
Gameplay
Gameplay is the star of the show here. The combat is addictive and fast paced, cutting down waves of monsters feels incredibly satisfying, and boss fights are climactic and challenging. Nothing is ever too difficult, but it's always fun.
6
Presentation
The game doesn't look bad, but it definitely doesn't look very good either. Music ranges from a decent soundtrack to being almost non-existent in some sections. Overall it does the job, but it just isn't a package that does justice to the world they were trying to build.
7
Lasting Appeal
Exploration is encouraged, and the game gives a reason to explore every level 100%. New Game+ adds an excuse to return to the game after completing it.
7.5
out of 10

Grimvalor might not be the prettiest or most complicated game on the Switch, but the fun factor is hard to argue with. It’s a pretty standard, simple hack and slash platformer, but it knows exactly what it is, and does it well. It’s not the most challenging game in the world, but it’s enjoyable from start to finish.
Reactions: T-hug
Share:
Facebook Twitter Reddit Pinterest Tumblr WhatsApp Email Share Link
Thanks, the combat looks indeed really fun and fluid.
Reactions: T-hug and RyRyIV
Are middle of the road games like this going to be this generation's equivalent to middle of the road side scrolling beat em ups of the 360?

When this sort of gameplay is executed well it is the sort of thing I play and remember decades later but this looks like it will be forgotten in something of a hurry.
Reactions: RyRyIV
looks alike Salt and Sanctuary, i will give it a shot.
Reactions: RyRyIV

I wouldn't doubt if that ends up being the case, honestly. It's a shame because I still get the urge to go back and play Castle Crashers from time to time, but you're probably right. Still, Grimvalor here is an fun time while it lasts, and lasts long enough to be worth the price of admission.

@ Dark_Phoras: I grew up with Insomniac Games, they and Naughty Dog are my Nintendo/Sega 1 minute ago
Chat 2