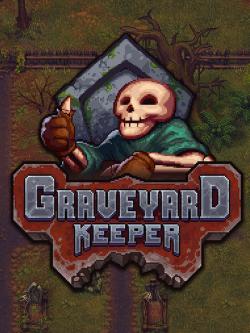 Single player
Local Multiplayer
Online Multiplayer
Co-operative
Do you enjoy burying corpses? How about autopsies? Well if you do it's time to make some morally questionable decisions in this very historically inaccurate management sim!

Graveyard Keeper is a wacky game that puts you in command of one of the finest jobs you’ll never know you probably wanted; graveyard keeping. Yes, that’s right. It’s probably not as glamorous as it first sounds, but it is definitely unique. As a man who was stripped from his normal everyday modern life, and transported to the medieval ages, this is apparently your ticket home.

As the name suggests, your character has suddenly become the new proprietor of the local cemetery. You’re tasked with burying the bodies brought to you by a rather odd talking donkey. What you do with those bodies between then and putting it in the grave, however, is up to you. As you soon find out, bodies have all sorts of useful stuff in them. Who knew? If you enjoy your pocket weighing more than your ethics, you’re free to help yourself to each cadaver buffet, though that will potentially affect its rating. Yes, only the finest bodies are truly fit to be buried in your graveyard, as they can confer points that judge the overall beauty of the property. Though, that’s why when you make a little slip up, there’s always the local river to carry away your problems. Probably to no ill effect to the nearby town. Probably.

Aside from your thriving cemetery, you have a whole host of things you could also do for fun, or to make money. Mostly just to make money. Once your graveyard is pretty enough, you can run your own church, for some reason. People tip surprisingly great in those times. Otherwise you’ve got all sorts of crafting, gathering, fishing, farming, and more to do. You can raise bees, turn questionable ingredients into even more questionable potions. There are all sorts of areas to open and explore, with dozens of NPCs to find and befriend. As you play, the more things continue to open up. 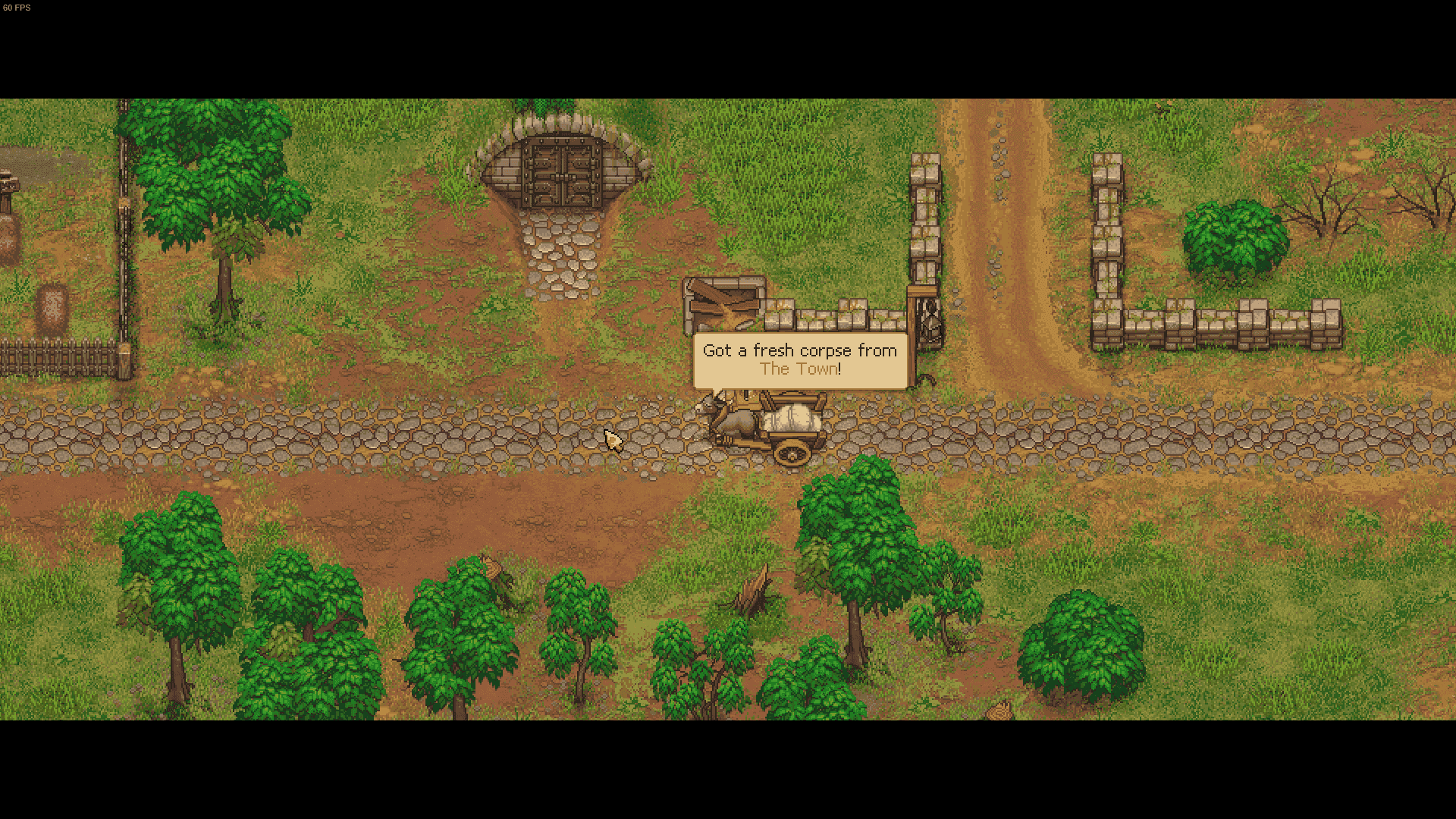 If all of that wasn’t enough, you also have several adequately sized tech trees with a variety of perks, recipes, workstations and more to unlock. These allow you to expand your experience at your own pace, and in the direction you’d like. Tech points are gained from nearly everything you do, so you’re constantly able to expand your knowledge bit by bit as you bounce from project to project.

Many of the small gripes I had with Graveyard Keeper eventually showed themselves right out the door. The game features 6 distinct days, but no seasons or curfew. At first this was a little jarring and disappointing, however I eventually realized I was just conditioned for stress and abuse with those systems. Graveyard Keeper has a much more relaxed pace about it because of the omission of these two things, and I think it’s a better experience for it. Stamina can also get in the way in the early game. As you become better, smarter, and more efficient, you’re able to greatly negate this. On top of that, you quickly gain access to cooking which will make stamina griping mostly just a distant memory. 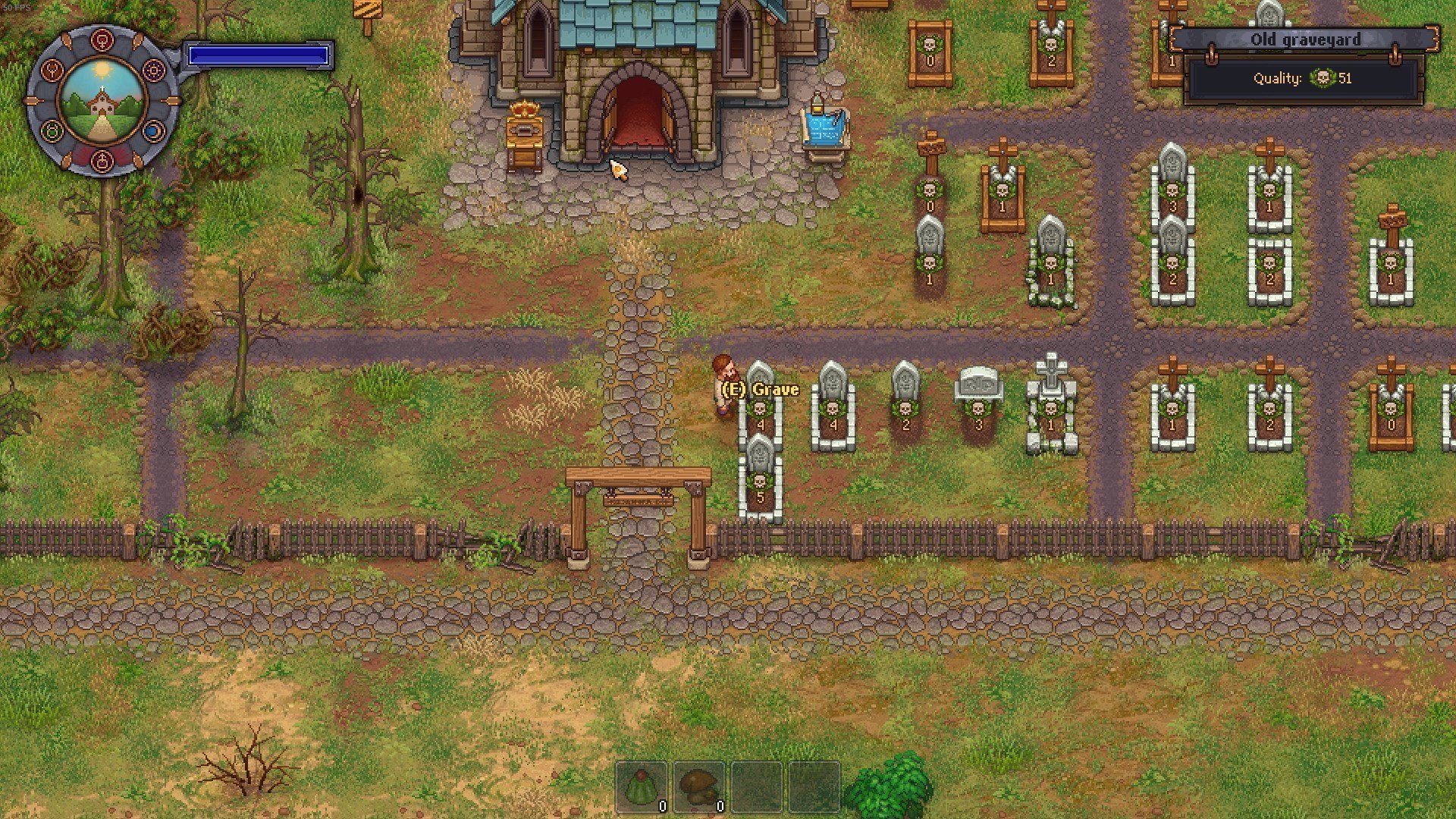 Stunning high-definition corpses (though not really)

Visually, the game is also quite nice looking; it’s got a fairly simple art style, but with a lot of care and attention put into the details. Mornings often sport a dense fog, and there are plenty more things that go on to make your time in the world a little more atmospheric. The accompanying music wasn’t anything that blew me away, but it was fittingly dreary and added a bit of a down-to-earth contrast compared to a lot of the wacky humorous things that tend to play off the time period.

Perhaps I should take my brain to the ol’ autopsy table and give it a few pokes, but I can’t really think of much else negative to say about Graveyard Keeper. The “farming-sim” genre of video games usually don’t tend to interest me, but more times than I can count Graveyard Keeper kept me up well past midnight. There was always, always, just one more thing to do, or one more thing to discover/unlock. Always something to work towards. The writing could be a little stronger, but it doesn’t detract from the overall experience. 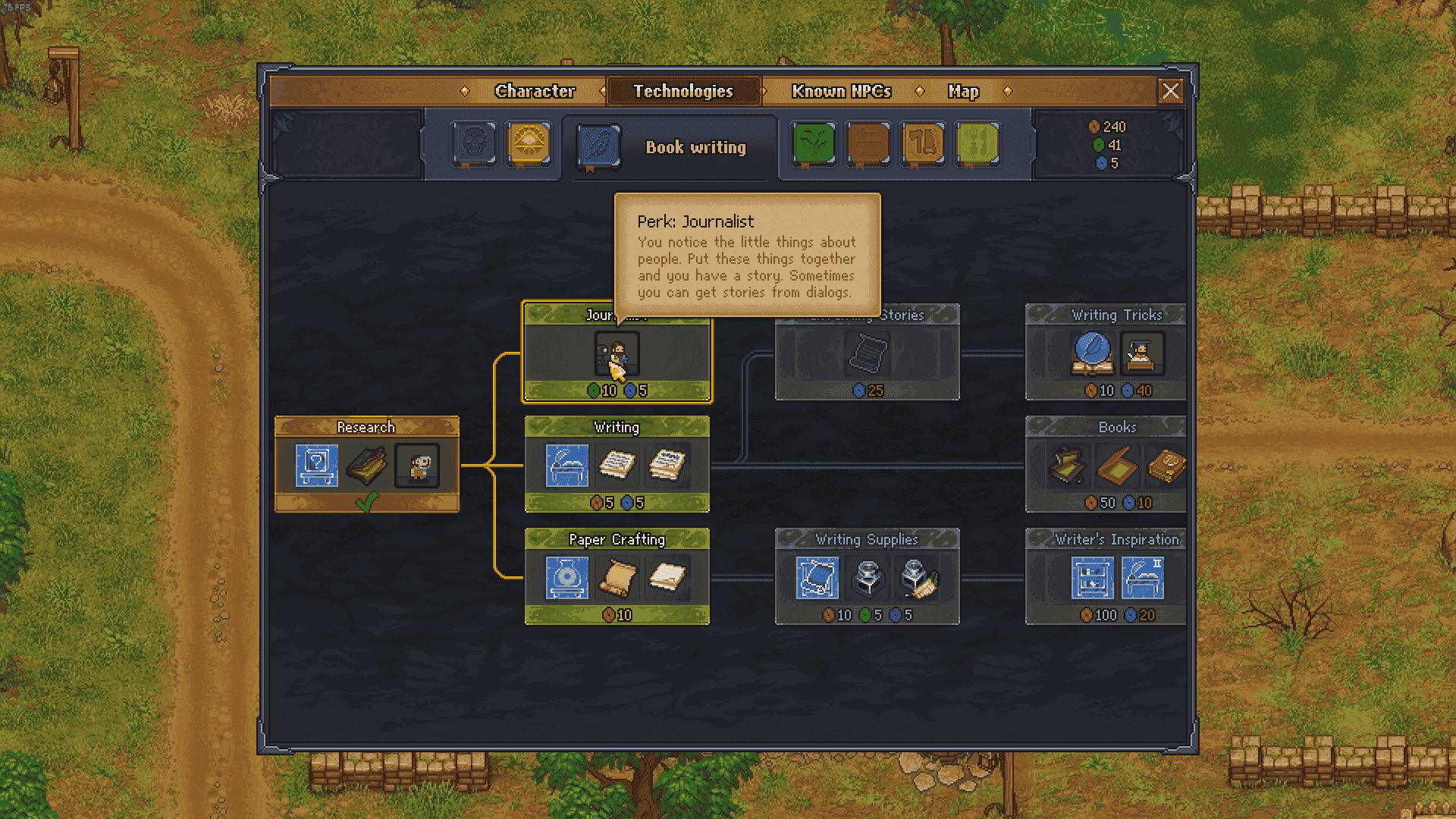 Overall, it’s just a very fun game to explore and have fun in. Graveyard Keeper won’t hold your hand, and that’s something I enjoy in a modern game. You’re dropped off in this crazy medieval world, shown the basics, and then given absolutely free reign over your own destiny. You’re free to do as you please. Thanks to the lax time constraints, this allows you to explore at your leisure, as well as complete projects at your own pace. Anyone more used to the heavy-handed guiding of similar games might be a little lost at first, but it doesn’t take long to settle in and find your place in this strange new world.

What We Liked ...
What We Didn't Like ...
8
Gameplay
Plenty to do, and to find. Presents itself as a graveyard keeping sim, but extends far past that. Plenty of NPCs to interact with, and decisions to make. No strict time schedule helps make the game much more relaxed.
8
Presentation
Has a lovely aesthetic and well-defined art style. Fitting music as well.
8
out of 10

A nice relaxed, and horribly inaccurate, management sim. Live your dream of becoming the owner of your very own graveyard! Really fun and addictive game. I was blown away by the sheer amount of stuff to do. As someone who doesn't typically enjoy this genre, this game managed to keep me addicted well into the night. If you enjoy talking donkeys and morally questionable decisions, this is the game for you.
Reactions: JakobAir, Sliter, mightymuffy and 4 others
Share:
Facebook Twitter Reddit Pinterest Tumblr WhatsApp Email Share Link
Any ghosts, zombies and the like to contend with? Seems like a natural thing to "liven" the game up a bit.
Reactions: Subtle Demise
Congrats on not mentioning 'the Valley game' in the entire review! Good fun, good game - like mentioned it does feel like it's not quite ready for release yet - maybe still in an Early Access state, so peeps with a bit less patience might wanna wait for a few updates (which there's already been plenty of).... I'm hoping this might also fix up a few of the story holes.
Well there are some ghosts, but no not really. Mostly just bats and slimes, and the dungeon has a bit more variety but still no ghosts or zombies.

and I wouldn't say it feels unfinished at all. Actually, for the price, it offers an incredible amount of content and plays fine start to finish. It's just clear there were some areas (namely The Town) where you clearly were originally intended to be able to go there, but they did a bit of a weak cover-up to avoid it actually not existing. Hopefully they do add more content, but it's hard to complain about what it already has.
I want to wait for the Switch version, I love Valley style games, and more if I can play it in the bed before I go sleep.
Reactions: Hells Malice
Microsoft store, steam and reddit are flooded with complains in there respect reviews. Apparently after 30 hours of play time, the game’s save system fails to work and players lose hours of progress. Dedicated players have created a patch system to patch saves n fix them on PC. The work around for the xb one version requires players clearing the xb cache. To do this, players need to log out of thier xb accounts and then shut down the xb all the way by holding the power button for 10-15 seconds. Curiously the xb one lacks the ability to clear the system cache through the settings menu like players could on the xb 360. Also it’s the same work around to get missing achievements to work, although that’s a hit or miss depending on the game
Never had an issue tbh. Most complaints are a bit misguided as they seem to want AAA content from a $20 game. But I haven't seen much for technical issues. I've played for about 55 hours and my save hasn't done anything weird. The only real issue I got was that my FPS would fluctuate a lot in windowed mode since the game doesn't have an FPS cap option. Was stable in full screen for me though.