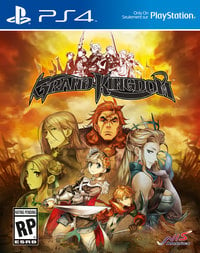 War never changes, even in the land of Japan, and today we’re going to take a look at some good ol tactical rpg fun! This is Grand Kingdom!

Grand Kingdom takes place in your average fantasy world full of dragons, castles and kingdoms. You play as a generic avatar customized to your liking, commanding a group of mercenaries while trying to become a true kingdom of soldiers.

There are over 48 chapters, 12 of which being main story and the other 36 being side stories, to play through. All of the chapters range from a half hour to an hour, so content wise, you’re really getting some solid hours. The story itself is a little fluffy and almost serves just to string the game along, but the gameplay sort of makes up for it.

As with any tactics RPG, things can be pretty cumbersome at first, with many options and rules being thrown in your face all at once. There’s plenty of in game tutorial’s but rather than the typical hand-holding kind of teaching some newer tactics games have today, Grand Kingdom is very much a trial and error style of learning.

Grand Kingdom also sets itself apart from other tactics games in its game-board presentation style. The maps are large, there are plenty of pieces (enemies/npc’s) on screen at once, and a lot of different approaches you can take.

Some missions have turn limits, some have invisible enemies, some force you to gather resources, and etc. There is a lot of variety to Grand Kingdom’s manic gameplay.

Ala Valkyria Chronicles, movement is based on movement gauges that deplete until you’ve made up your mind on where you’d like to be placed. From there, you can plan out attacks and skill sets to use. Combat is focused on taking complete advantage of your character’s attributes and fighting styles, and placement is a necessity. Friendly fire, blocked movement, or unfavorable matchups are entirely possible and could lead you to failing missions you’d already put plenty of time into.

The game also has an online mode, simply titled, “War.” Before you can participate online you need to sign a contract with a governing power of the world; Landreth, Valkyr, Fiel and Magion. It’s important to choose which land to side with, as it can reflect on the side missions available to you. War is the only differing game mode you’ll have available to you, as the main objective is for you and all other allied players to attack enemy encampments and fortresses on the battlefield, all within your own space.

Outside of the main game, lies the hubworld, which allows you to do all your recruiting, upgrading, training, and more. Class changes are available as well, and swapping out mercenaries is usually a must to take on the changing challenges of the battlefield.

There are over 17 different classes, from healing to a multitude of damage types. All of these characters can be customized as well, from their names to their faces and styles, a little bonus I was particularly a fan of.

Overall, Grand Kingdom is relatively simplistic in both art style, and gameplay, but it does its job relatively well. To be honest I felt little unique qualities of the game, but found the entire experience overall relatively enjoyable. At the end of the day it was nothing I hadn’t played before, but it was nice to have in the first place. It’s approachable with slight difficulty curves in the beginning, yet accessible to anyone.