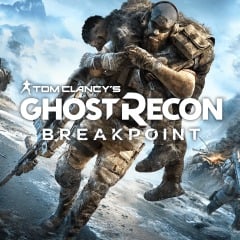 Used to play GRAW a lot way back when and recently I was not a huge fan of Wastelands, let us see if this is any better.
Tom Clancy has had a long and lustrous relationship with the video games industry, since the days of Rainbow Six on the PSX and N64 back in 1998 up until this year's effort: Ghost Recon Breakpoint. Is it a chart-storming groundbreaking entry or is it a literal breakpoint for the series?

Vast luscious and varied environments, seamless cooperative play, and a gritty sci-fi edge to a modern story of war and treachery makes this title immediately appealing. I couldn't wait to dive in and check it out, even the box drawing me in with its promise of a "diverse, hostile, and mysterious open world" both playable alone or with up to four people. One crucial point to this sequel of Wildlands is that it requires an online connection in order to function, though PSN is not necessary unless you wish to play online in the PVP modes. In a world where we have internet widely available, this shouldn't be too much of an issue, though why a check is required at the start, even if you intend to only use local coop going forward, is beyond me. After installing the game you begin in a standard fashion by setting up your preferences for the look and feel, selecting a difficulty from arcade/regular/advanced/extreme options, and then attempting to advance to the next screen. The navigation in the menus is hideously implemented and it is a hit or miss affair if the cursor detects the "next" box or not, forcing you to wiggle the cursor in and out of the box until it eventually detects and allows you to press cross to proceed. After advancing to the next set of options I found a nice variety of toggles including those for colourblind modes, which aren't apparent enough in recent games. Hats off to Ubisoft for that. Once you're finally in-game, the introductory movie to Breakpoint paints a utopian vision of the future as orchestrated by Skell Tech, a visionary company who aim to provide economy, security, and community based on innovation and creativity. As the scene is set and the Jace Skell's drone-soaked mission statement unfolds, there creeps in this edgy and glitched out feel to the presentation which immediately sets you on edge, as you can feel an evil regime stirring and you know those drones are going to play a huge evil part in this narrative. Cut to the first mission: operation Green Stone. Set somewhere in the not too distant year 2025 in the South Pacific Archipelago known as Aurora, you're tasked with investigating the mysterious sinking of the USS Seay and the loss of contact with Skell Tech and Auroa, however your helicopter ride is cut short and you crash land only to find yourself in an extremely hostile environment. During this chopper scene, you get to design your Ghost, choosing gender (of which there is only two), and customising the facial build, hairstyles, eye colour, and adding any distinguishing features such as scars to add yet more character. Once you're set, your bird gets taken down by a vicious cloud of those lovely drones and you know that this location has been compromised. You are the sole survivor and It's time to patch up and move out. Gameplay rolls on with you fixing yourself up with a bandage and borrowing a sidearm from a corpse before traversing this tropical landscape towards your beacon. You quickly stumble on a group of enemies searching for survivors and this effectively acts as your tutorial stage; a couple of simple headshots while staring down the iron sights and you're free to investigate the wreckage and look for and fellow survivors. Limping on further you find a weapons cache and view a bunch of tutorials including some clever stealth and camouflage techniques such as burying yourself in mud and playing dead, much like Owen Wilson did in Behind Enemy Lines—your immediate situation definitely feels similar to that far more intense movie.

If you're not with me then you are against me, and the Wolves are definitely not with me. They're a lethal ex-US military unit gone rogue led by your former bother-in-arms, Colonel Cole D. Walker. They have your level of training and expertise, however, they also have drone technology at their disposal. Upon first meeting the Wolves you're blinded by an overly large and arcade-style banner warning you that this is a "Dangerous Area", like really? We just got shot down by them so I doubt they're breaking out welcome drinks for me! Luckily you have a couple of scoped rifles by this point and you can tactically and stealthily pick off each one with a satisfying headshot, as running in with a handgun or rifle will definitely get you killed. These guys are good, but not good enough at outflanking you if you have the higher ground and a sniper rifle. Take your time and you will level up quickly thanks to distance and headshot bonus XP. One thing I did like in this game was how satisfying the headshots are. One bullet to the head is all it takes to end even the most brutish-looking armour coated soldiers; it's super realistic and it's exactly how I expect shooters like this to play. The skill tree in this game is initially exciting but unfortunately grows to be quite dull. Starting with your first skill point for taking care of a squad of enemies, it's up to you to decide which class you wish to specialise in—you can choose from Field Medic, Assault, Panther, or Sharpshooter. Medic sounded a little tame, Assault a little cliche, Panther class is basically the stealth option with a cloak and run mentality, so obviously I chose Sharpshooter as this is my comfort zone, ranged combat with a stealthy edge and the ability to fall back to close quarters battles should I mess it up. The skill tree itself is more of a skilled bush with a cloud of options at your fingertips when you earn enough skill points. Your initial perks include basics like night vision goggles and parachutes, the stealth perks include "Slim Shadow" stealth XP and specialist hacking tools,  and the recon perks include tasty gadgets like thermal imaging, which as you can imagine proves extremely useful in the dense jungles. With a "git-gud" mentality, you simply need to level up and unlock perk after perk in a row to be able to unlock the next in the series. For example, you need basic tech hacking in order to unlock advanced drone hacking later on.

Running around the environment is fun at first, but then the scale hits you and you realise you need to use a vehicle; it's at this point you find out just how sparse the map is and how using any type of vehicle gives your position away immediately. On first impressions the map comes across a little like those in Far Cry with question marks peppering the environment for you to venture to and unveil the name of the location at hand, and while it's similar, it's just not as entertaining. The game possibly trying to be too realistic for its own good, the net result is an assuredly uninspiring and uneventful trip from point to point, where firefights are great, but underwhelmingly repetitive. It's a huge contrast based on Ubisoft's crammed full IP's like Assassin's Creed and Far Cry where there is something entertaining is going on at every turn. Even the wildlife wants to stay out of this game, with the occasional wild pig or rabbit springing out ahead of you, however, there is no purpose to them, no sustenance to be gained, and no pelts to be utilised. I found this strange considering you could collect flowers to make medicines out of, and considering spotting any wildlife was so few and far between I thought they would serve a fascinating purpose, but alas no. Upgrading you guns at the gunsmiths is neat, allowing you to frankenstein together decrepit old parts into a shiny new beast of a weapon. Pro Tip: don't forget to drink plenty of water on your travels to battle fatigue, fill up your canteen and keep hydrated. Cooperatively this game can be a blast and playing with friends you get into it; you trash talk, you jeer each other on, and you even enjoy the game during those long dull treks because you're a squad. Using tactics together is massively fun providing you don't experience any lag or desyncing, but even then nine times out of ten alarms get triggered and hell breaks loose, forcing you into a mindless assault. Building on Wildlands' multiplayer modes, and thanks to community feedback, the updated Ghost war now takes cues from games like PUBG and Fortnite, meaning there are definite elements of battle royale included such as shrinking maps in "Elimination". This makes for pacier stalemate-breaking gameplay, which is genuinely refreshing to see in a Ghost Recon title. This is juxtaposed with a rather downplayed "Sabotage" mode where you simply plant or diffuse bombs in a best-of-three rounds style in teams of four. These PvP battles will take place across 6 maps initially, though more are planned throughout the year, along with new classes and new modes. Multiplayer offers milestones and heaps of achievements for feats of strength or achieving certification, each of which put forward tantalising special perks, in-game currency, or customization items should you complete them. I have to say I found the multiplayer quite bland on the whole; perhaps it will mature over time and develop into something more interesting given further feedback and with the inclusion of more modes. Microtransactions plague this game like no other before it, however for those who won't part with their hard-earned cash after paying £50 for the game, you can easily find and obtain a lot of weapons and parts very easily throughout your adventures. I personally wouldn't pay for blueprints or better weapons immediately, I would hunker down into this and explore every bunker, every nook and cranny to find as much as I could before even entertaining the idea that I need to pay to get something I will find eventually. Granted there are probably pay-to-play elements such as weapons, garments, and customization that you can only get by scaling the paywall, but I found enough content and variation in my weapon pickups that I didn't feel I was missing out on anything, which is a good thing in itself. Buying into these "time-savers" puts at risk the game's larger sense of balance, leaving you overpowered far too early, and trivialising what challenge is on offer. Take your time, earn your scars, discover your best weapons, and enjoy the scenery.

Overall I feel that this is a better outing for Ubisoft than Wildlands was. The story is at least intriguing, the environment and vehicles are bigger and better, and the gameplay (while sparse) is more interesting and realistic. Ultimately this game suffers a bit of an identity crisis with it being a strict military cooperative shooter at its core, a survivalist adventuring simulator, and perhaps most strangely of all, a weak open-world intel-sharing "RPG" with pointless optional dialogue in the bland and worthless cutscenes. There's also a weird looter-shooter mentality bundled on the side.. The open-worldliness and ability to take on any mission at any point, even facing off against the main protagonist and finishing the game within mere minutes if you have the skill is great and all, but in the end this is one AIO package which never reaches the crescendo of being satisfyingly brilliant at any of those things, and that is a hugely disappointing opportunity that has been missed by the developers. Perhaps the next game will be better if people can persevere with this increasingly dwindling series.