Recently got into mobile games, in particular, prop-hunt games; don't ask. Anyway, I am absolutely psyched to test something out that could give me a competitive edge.
Mobile gaming peripherals have been around for several years now, and the lines between console and mobile gaming are blurring. What advantages can be gleaned by purchasing "gaming" devices for your trusty smartphone?

GameSir was established in 2010 in Hong Kong and have a wide plethora of gaming peripherals in their back catalogue, alongside an 80-million-strong global userbase through software alone. With cutting-edge devices ranging from high-performance mechanical keyboards, gaming mice, console accessories, and an array of intricately tailored pieces software at their user's fingertips, GameSir's gamer-oriented philosophy is a commitment to expanding the boundaries of performance, providing an excellent gaming experience through better gaming peripherals and well researched and evolving software support.

Can the G6 Touchroller actually make you a better player, or will you be left with the gear but no idea? 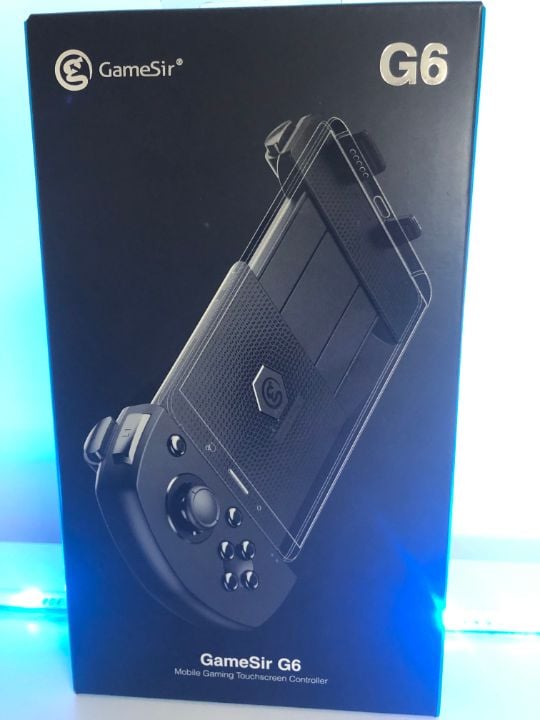 Having a few mobile phones at my disposal I thought that this device would better suit a smaller screen, and so first mounted an old iPhone 6S to it to check it out. I instantly realised it could far exceed the width of such a relatively small phone, so I instead tested out my iPhone 8 plus, and my old iPhone 6S plus. Stretching the spring-loaded Touchroller into place was a doddle, with no awkward popping out of the phone and no scary pings or sounds coming from the grip. It was suitably snug once settled and I was instantly confident in its durability. My first impression of this was that it mimics the Left Joy-Con of the Nintendo Switch, and in comparison, it's certainly not far off with a 1:1 identical joystick, with four main buttons placed below the joystick, and dual shoulder buttons up-top. The G6 has a total of 10 buttons at its disposal, which includes: three triggers, six front-facing buttons, and one analogue stick, all of which can be mapped using "G-Crux" from the app store.

G-Crux itself contains several predefined setups for certain popular games, which have been handily shared by other G6 users via the app. If your game is not on the list then you can build your own layout and share it back to the community. The app takes very little skill to set up, and since I have used similar applications like Octopus for android in the past, it was truly a cinch to configure exactly what I needed, regardless of the game I was playing. The main gist of how to do so, for virtually any game imaginable, is as follows: simply start your game, take a couple of screenshots of the main interfaces you normally use in-game, close your game, start G-Crux and create a new configuration, open the screenshots and place & assign your buttons wherever you want them to simulate a screen touch, save and write the configuration to your G6. I would say that it took me all of 5 minutes to get acquainted with the software and get my first game set up fully, which is a testament to the ease-of-use of the partner software.

Gaming on the mobile platform can be tricky and extremely fiddly even on a larger screen, and to combat this you can configure your G6 to an infinitesimal degree, thanks to combo buttons and scaling of the touch areas on-screen. For example, if you have four items on screen to chose from; but they're just weapon types (you don't want to waste four buttons on just those functions), instead you can use a button like L2 as your combiner and a second button as the one you need to press in order to activate said item. I found that L2 was the perfect combo button, and the four main fascia buttons could, therefore, be used as dual-purpose buttons. It was extremely instinctive and, abnormally for me, I didn't find myself forgetting what I had set and having to consult the configuration. It was a relatively flawless system that gives you the freedom to customise it how you find it most comfortable and most useful. I actually enjoyed the process of altering button positioning and scale on G-Crux to make buttons serve even more purpose in menus as well as in-game. 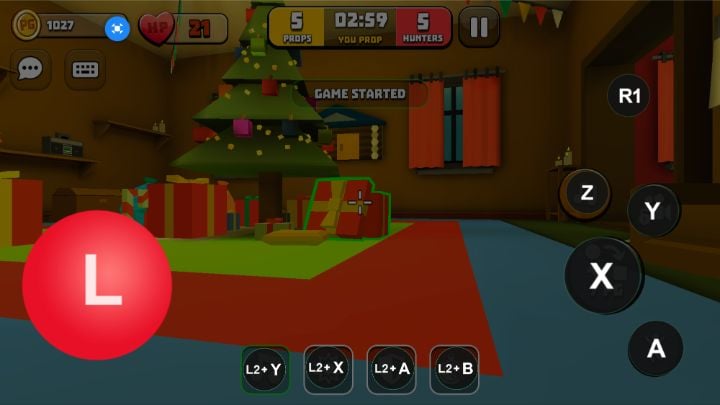 The main games I played while testing this piece of kit were the ever-popular PUBG, and a little known free unity game which is based on the "prop-hunt" sub-genre of first-person shooters, named "H.I.D.E". In 'H.I.D.E' you begin the game as part of either team prop or team hunter, in a five vs five game of epically thrilling situations. I found this game purely at random when a YouTube playlist went awry and showed me footage of the incredibly entertaining prop-hunt mode in Call of Duty: Modern Warfare. Something in that 3-minute video spoke volumes to me, and as a result, I searched for an equivalent to play on my lunch breaks at work. The main issue I has with the game is the dual on-screen analogue set up and obvious lack of trigger buttons; it made simultaneous aiming and shooting an exceptionally difficult affair, particularly when targeting any miniature-sized scampering props.

The moment I started playing with the G6 Touchroller I vocally proclaimed its complete and utter FPS tuned excellence. No longer did I have to have two thumbs covering over my screen, no longer did I have to switch my right thumb from aiming to firing and losing valuable seconds and positions, no longer was I a decent player; I was now absolutely owning it at almost every turn. The analogue stick is dead zoned superbly and as a result, I could spin on a 6 pence, and maintain my fluidity of motion throughout the duration of the game. The stick is also excellently positioned and at a perfect height so as not to get cramps or stiffness in your knuckle. With just one thumb on the screen acting as the aiming input and my right index finger on the R1 trigger, I have far more screen visible and far more control over aiming and firing at the same time. Within mere seconds I was acclimatised to the setup, and my foresight to set up buttons for actions like "play", "start", "retry" or "quit", I could now take my gaming to the next level and strive to win more than ever before. before now I average one-to-two props massacred per match, after using this I now average 3 per game, which is technically a drastic improvement. 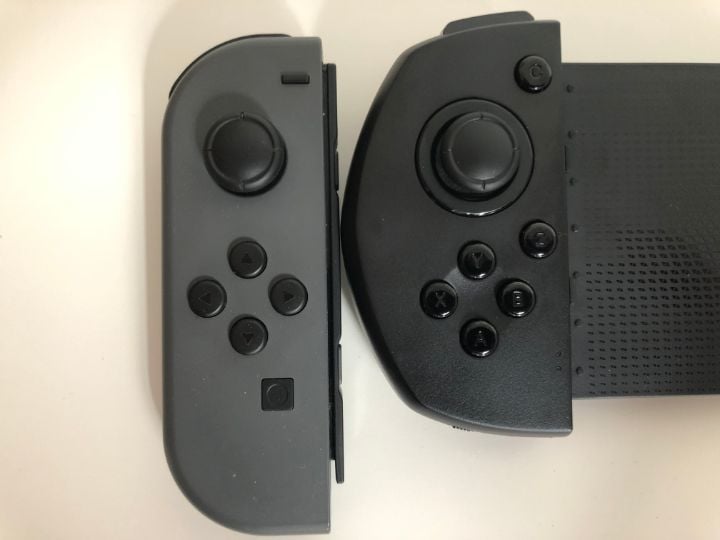 Ergonomically, it was a slightly wider stance I had to adjust to and it really wasn't difficult as the G6 has rubberised grips on the back; it actually made for a more comfortable experience all around. One thing I don't quite understand, and I have to criticise this unit for, is a distinct lack of buttons on the right-hand side. GameSir's T6 controller grip only allowed for two front-facing buttons, two left triggers and an analogue stick on the left side, so this G6 is a step in the right direction giving us a huge number more buttons at our disposal, but the clue is in the name, and its design seems to favor gaming while simultaneously using the touch screen and easy access to charge your mobile while gaming to provide an uninterrupted gaming experience.

As fantastic as this device actually is, I feel that if they included a right-hand side layout to mirror the left-hand side, with a simple pass-through power solution, a device like this would rise from a solid recommendation to an essential purchase. I could foresee a mind-bending 18 buttons, including dual triggers on each side, dual analogue joysticks and still retaining the 70-80hr battery life very easily.

Verdict
You, LonelyPhantom and Xzi like this.
Unlike this review