What should have been a regular day turned into a hellish one for Evan Kapnos. Shortly after waking up, he learns that his identity has been set for foreclosure since his employer (and the owner of his identity debt) has gone bankrupt. As a result, Kapnos has not only lost his job but his brain implants and service weapon have been rendered naught. Oh and access to the city’s blockchain has been blocked and he cannot leave the city either.

In a bid to escape before his identity and implants are auctioned off, he slowly starts to unravel a conspiracy behind his foreclosure. What will Evan Kapnos uncover and wil he get to be free and be the owner of his own identity? This is what the story of Foreclosed is about. 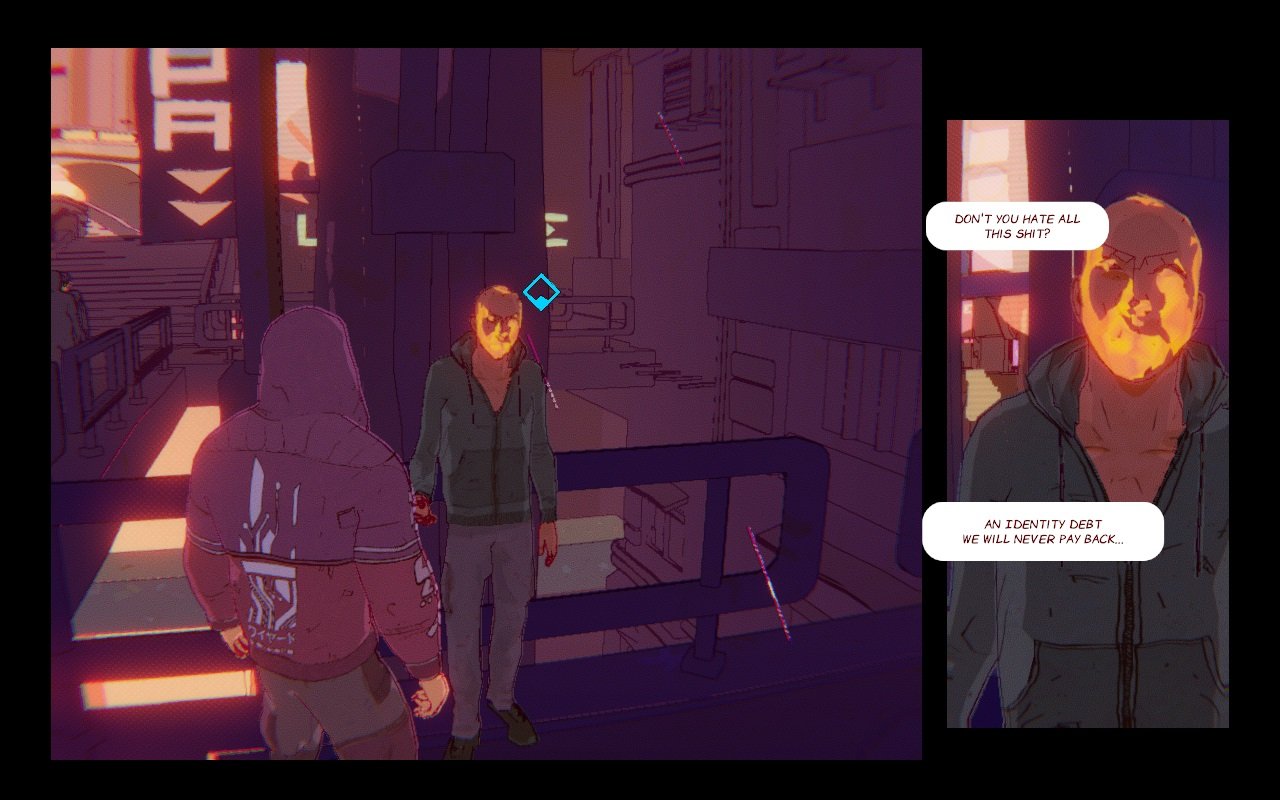 Foreclosed’s plot is a rather original one that could still do with some more fleshing out; especially regarding the cyberpunk world you are in. Why the society you are part of is in the state you find it in and why citizens decided to adopt brain implants would be interesting to develop upon. The game would benefit from such an exposition as well given that it isn’t very long in itself, clocking at around 3 hours of playtime across its 16 chapters; even counting in its two different endings.

But in that short span, the presentation is striking. The “ interactive comics” appeal that Antab Studio aimed to deliver has been well executed. When scenes change, it’s frames that slide into view, letting you move across them and often from different angles. When characters talk, subtitles make way for speech bubbles. When you fire shots, they don’t only deliver audio feedback but also visual ones in the form of captions.

The cel-shaded aesthetic adopted to portray the game’s universe also plays well in the comics style. Autonomous drones, holograms, enemies and the cyberpunk-themed environs are well depicted in this art style and looks decidedly different from other recent cyberpunk games like Cyberpunk 2077 and The Ascent and this helps set it apart.

This original presentation is definitely the forte of Foreclosed and it also extends to the voice acting for the most part. For the most part because, despite some pretty good voice overs for the NPCs, the protagonist’s voice actor feels off. It’s evident that he is aiming for the gruff type but he is trying too much for it to feel authentic. 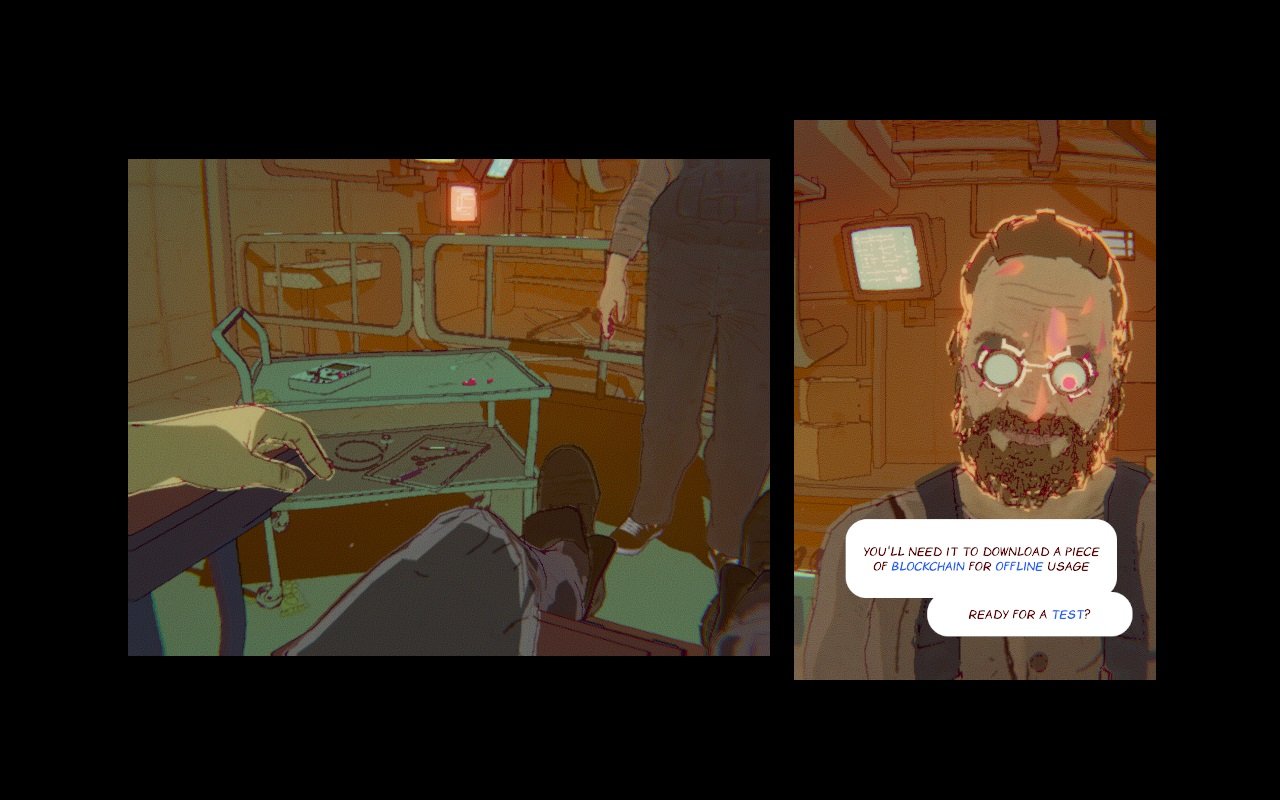 Its unique look aside, what also initially drew me to Foreclosed is its combat mechanic which blends well with the cyberpunk world. Evan Kapnos eventually gains access to his brain implant which in turn lets him use weapons and hack systems. But his chip is also a limiting factor as it can overheat and will require a cool down period before you can use weapons or abilities again.

Moreover, by gaining experience points, you can upgrade Kapnos’ chip to unlock new abilities like exploding bullets or use telekinesis with your bullets so that they propell automatically to your target. EXP can be collected by progressing in the story as well as locating hidden EXP nodes that your chip can somehow detect like a sonar.

Combat isn’t only about shooting either as it merges stealth elements. You’ll get to hack doors, hack automated turrets, sneak past enemies and overheat their implants unawares. 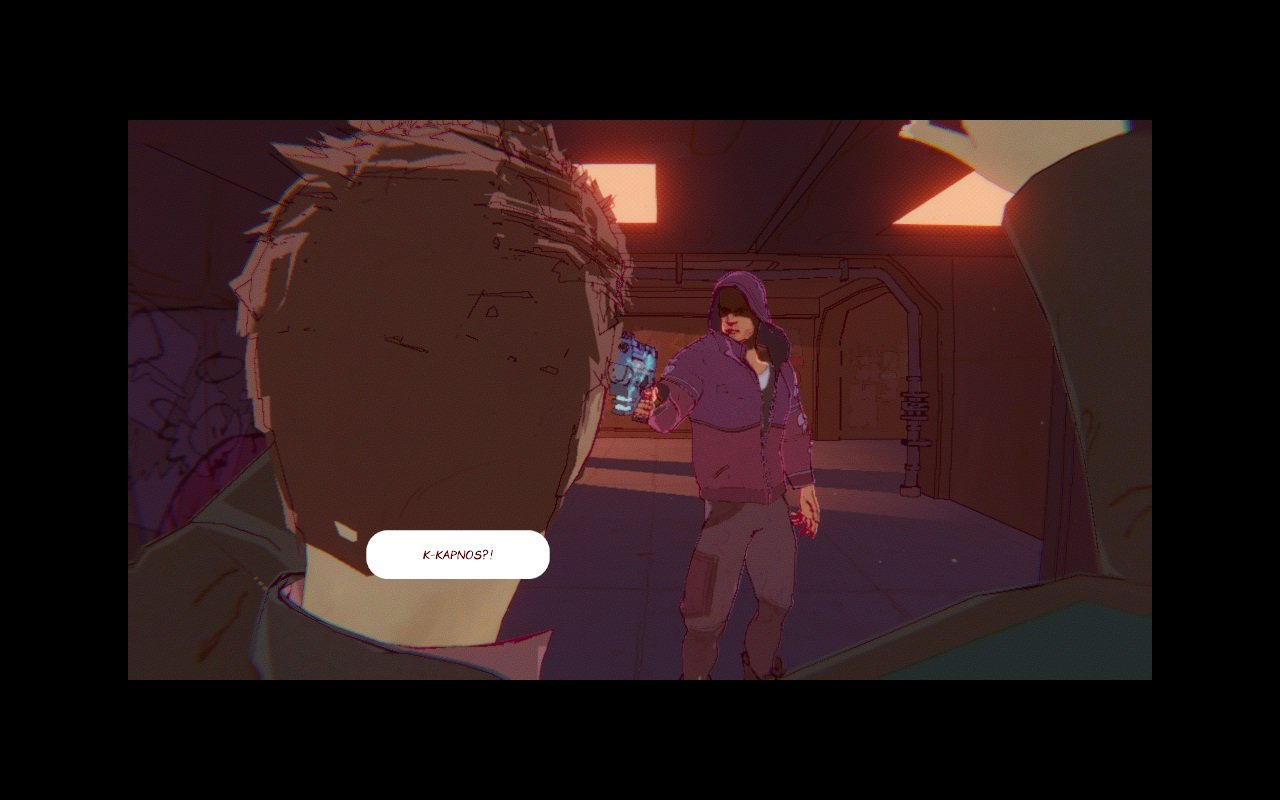 In theory, Foreclosed’s gameplay looks promising; but in practice, the execution is botched. While the different abilities bring some much needed variety and fun to the gameplay, the same can’t be said of its other aspects. Hacking doors with the D-pad is an overused mechanic which gets old fast. Also overused are the enemy models which vary only slightly in their defenses like having a helmet or shield but they are essentially the same models. In addition, the enemy AI isn’t very competent. Some might not react to a barrel exploding just a few meters from them while others will fire at you from fixed in place, without taking cover or varying their attacks to offer some sense of challenge.

This bland aspect unfortunately extends to the game’s universe as well. Despite being originally depicted with its cel-shaded aesthetics, places look empty and devoid of the hustle and bustle that characterizes the cyberpunk genre. Save for the opening sequence, the only other NPCs you’ll encounter are those you’ll shoot at and even those aren’t very much varied. In this sense, Foreclosed often feels more like a tech demo than a fully fleshed out game as the amount of variety is on par with a PS1 game and not in a very good way.

What We Liked ...
What We Didn't Like ...
6
Gameplay
This title surely has some promising and original gameplay mechanics but they have unfortunately not been optimally executed.
6
Presentation
With its original comic book meets cyberpunk aesthetic, Foreclosed looks the part but its world isn’t as fleshed out to make for a more immersive universe feel.
5
Lasting Appeal
Due to its bland gameplay and empty world, Foreclosed doesn’t do a great job at drawing players to it
5.8
out of 10

@ Psionic Roshambo: I am sure within a week I will find some discrepancy... Lol A moment ago
Chat 1