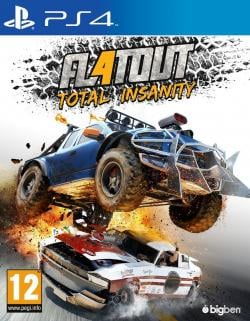 FlatOut 4 Total Insanity is actually the 8th game to be released in the long-running racing series. Originally launching on the OG Xbox back in 2004, FlatOut was known more for its controversial, ragdoll flinging of a car's driver through the windscreen upon crashing, more than its racing prowess. 13 years on and now sporting a very competent physics engine, a ton of modes and a slew of party games, FlatOut 4 Total Insanity is here to put your pedal to the metal.

For what is predominantly a racing game, FlatOut 4 sure has a ton of modes to race and mess around with. The standard Career mode features a Derby, Classic and Allstar cup, with 3 tiers of difficulty for each one. Each cup lasts around 15-20 minutes depending on how many tracks are in it, which is pretty long for the petty rewards you initially receive for finishing first. Also if you choose the 'wrong' vehicle when selecting your ride, you will bounced around the race course like a ping pong ball by the A.I. This makes finishing first and upgrading your car enough to be competitive, or earning enough cash to buy a better car a bit of a chore, at least initially.

FlatOut mode has 42 solo challenges, which mixes up every mode of the game with increasing difficulty as you progress through each challenge. Quick Play is for setting up any mode, race and track however you want, which is cool for practicing or for jumping into a random event. Multiplayer is for online racing, but as the game wasn't actually out at the time of writing, I've only managed to have a few races against other reviewers and the game's creators. Match ups have been great though, very competitive with no lag or anything 'bad' to report. Online multiplayer is very customizable, with the host being able to set everything up, from the course and number of laps, to the weather, and even damage modifiers. There is even a battle and carnage mode, with Mario Kart style weapons for scoring points and taking out your opponents.

Arena mode is a full on versus Destruction Derby, with a straight up Deathmatch, Keep The Flag and Survivor modes; these match types being some of the most fun I've had with a racing game since the Burnout series. FlatOut 4's vehicles have a huge nitrous gauge too, which is filled up by causing damage to your opponents cars, or to structures and objects on the courses themselves. Unleashing it makes you go so fast that controlling your car is nigh on impossible, so it's best to only use it on long straights to gain some distance, or to try and wreck another vehicle by ramming into them. 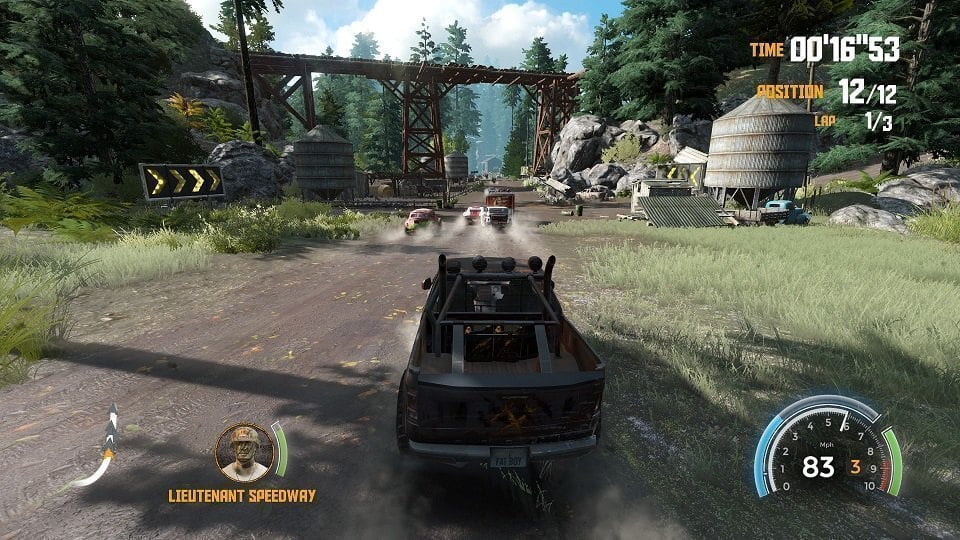 As a lap racer FlatOut 4 is a ton of fun. There are 20 tracks available, but they all take place within the same 4 or 5 environments, that although are well rendered and full of detail (enhanced for PS4 Pro) they have this weird haze over them, giving a washed out effect to the graphics. Courses will also quickly become stale due to the sheer amount of races required to unlock all of the vehicles and finish every event. Car handling is good, and level destruction physics are fantastic, crashing through buildings and other structures litters debris all over the roads, causing your rival racers to swerve and avoid it or risk themselves crashing. This can turn the race in your favour, or alternatively inflict massive damage to your ride. Should you be unlucky enough to pummel straight into a tree log or a stray tyre, real-time damage caused to the car can end the race instantly if you receive too much of it and blow up.

Unfortunately, as is all too often with this generation of video games, despite running at 30fps, FlatOut 4 does not feature any kind of split screen mode, so if and when the online multiplayer ever dies out, you will be left with only the Career mode and party games to play with. 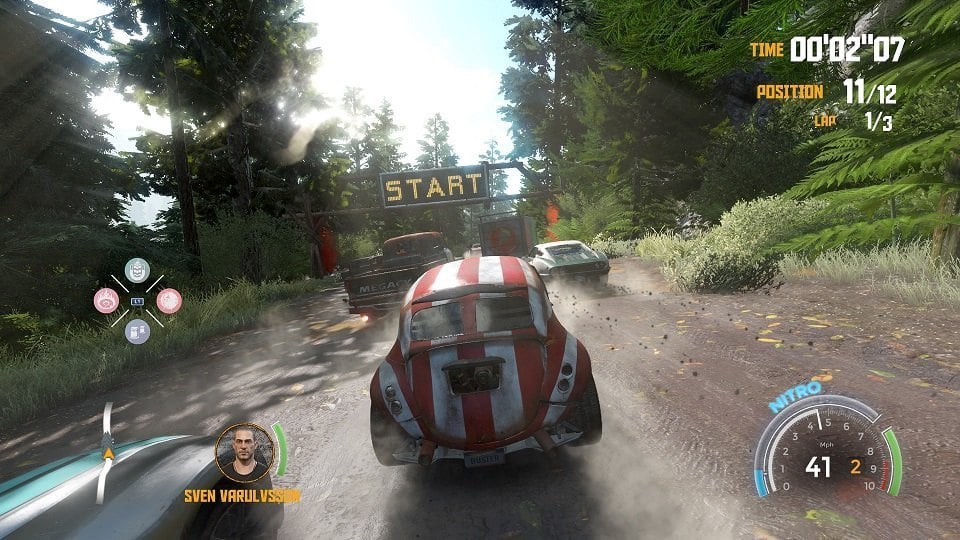 When the original FlatOut first released back in 2004, it quickly became a talking point not because of the great physics-based racing, or the relatively new at-the-time course destructibility, but because of the jarring way the game would fling the driver through the windscreen, ala crash test dummies, every time you ploughed the car into an obstacle. Some people thought it was in bad taste, even though it was hilarious to watch as you could semi-control the unfortunate driver's trajectory as he soared through the air before plummeting to his inevitable death.

This feature, along with the great physics engine ended up being used in a variety of mini-games which the series is probably now most known for. FlatOut 4 is no exception, featuring a load of party games and stunt modes for you to fool around with and try and make your way to the top of the online leaderboards. 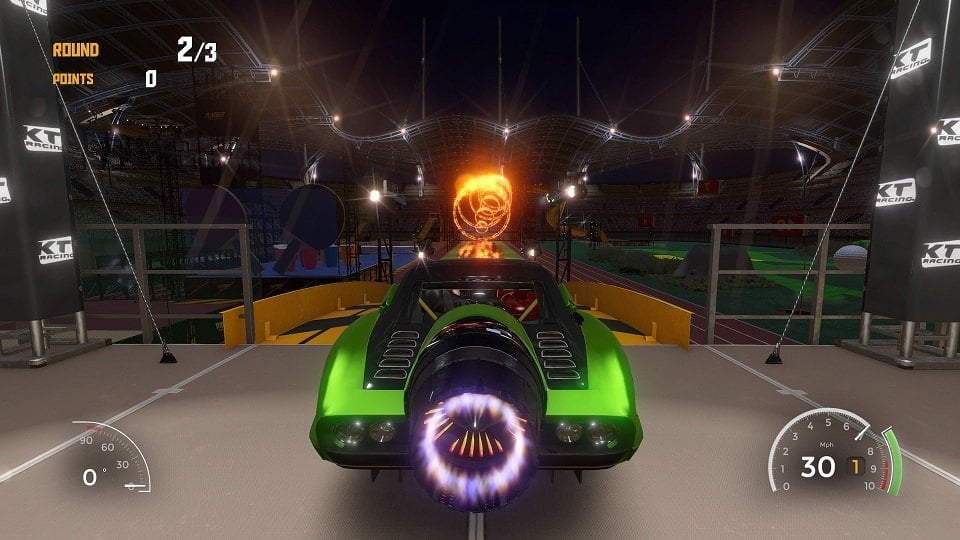 Usually starting at the top of a huge stunt ramp, you put your foot down, use some nitrous oxide to get up to an insane speed, slam on the brakes and watch your guy smash through the windshield and fly off towards whichever minigame setup you have chosen. There are 12 to choose from in total, including golf, long jump, billiards, cup pong, rings of fire, soccer, baseball and curling. The various party games and stunts are a great distraction from the intense racing found in the Career mode, and when put together create an overall varied, great value package.

What We Liked ...
What We Didn't Like ...
9
Gameplay
FlatOut 4's racing feels great when you slam into a rival and send them careening off the track, or cause them to explode altogether! The destruction adds another layer of strategy to the matches and the combat and carnage modes are literally a blast to play.
8
Presentation
FlatOut 4 looks great overall but there is a clear disparity with the graphics between the Career mode and the party game modes.
8
Lasting Appeal
Career mode will take a lot of wins to unlock every cup and all of the cars. The party games offer endless fun for when you have friends visiting or you feel like trumping the online leaderboards. If all of that isn't enough, you have up to 8 player vs online multiplayer available to really test your metal.
7.9
out of 10

FlatOut 4 Total Insanity is possibly the best game in the series to date. Some of the characters and tracks may feel a bit generic, but that doesn't detract from it being a more than competent racer that is seriously fun with a lot of unique features exclusive to the series.
Reactions: Tyraeklis, Issac, VinsCool and 1 other person
Share:
Facebook Twitter Reddit Pinterest Tumblr WhatsApp Email Share Link
I bet @TotalInsanity4 will love this game.
Reactions: 2Hack
*ba dumm tsssss*
Reactions: 2Hack
I'm calling my lawyer
No local multiplayer? This would seem like the perfect game for it!
You can't win by releasing a game the same day a new Marvel Netflix series releases. Looks kinda fun though.
Reactions: T-hug
wow
Soo... This game is better than FlatOut 3, thank god for that
Reactions: T-hug

THEELEMENTKH said:
Soo... This game is better than FlatOut 3, thank god for that
Click to expand...

This game is better than BOTW, thank god for that
This is again a familiar name for a racing game, but I was actually waiting for some more gas guzzlers extreme.
But hey, over time there could be somewhat more games like this be out. Maybe then the times comes you could pick a game like this, if you're wanting a similar experience. I'm glad now i don't have to feel stuck/being saddled down with a rally game. great to watch outcoming games and what gameplay diversity each game has, "what you get like" for a feeling of the whole driver experience on this gen. console would be (enough fun to find, i think.)
Reactions: T-hug
I really liked a couple of these games, I don't remember which ones exactly, but maybe the original Xbox one and the PSP one. The mini games are a ton of fun, perhaps more so than the racing. I probably won't pay full-pop for this one, but I'll def snag it for $20-30 in a few months.
Reactions: T-hug