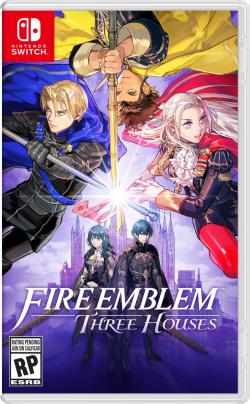 Fire Emblem: Three Houses marks another landmark title in the series. But does this shaking up of series tradition make the grade?

In the early 2010s, the Fire Emblem series was in trouble. Dwindling sales meant it was on the chopping block for Nintendo, who gave developer Intelligent Systems one last chance with the series. 2012’s Fire Emblem: Awakening, thankfully, was a hit and propelled Fire Emblem to be one of Nintendo’s priority series. Awakening also marked a change in tone for the series, becoming notably lighter and placing more emphasis on the support system, allowing players to marry any unit off to one another, which disappointed many longtime fans who felt that the series was leaning too much into dating sim territory.

Fire Emblem: Three Houses feels like another landmark title for the series. For the first time in the series the gameplay outside of battle feels fleshed out and worth investing in. A variety of enhancements to the battle system makes your units feel more powerful and give you more tools at your disposal. The revamped progression system gives you greater control over your units’ overall stats and abilities, getting you more invested in them and giving each of them a better sense of identity. Most impressive of all, it manages to accomplish all this without losing what has always made Fire Emblem work, and it even rectifies some of the issues that defined the Awakening era of games. 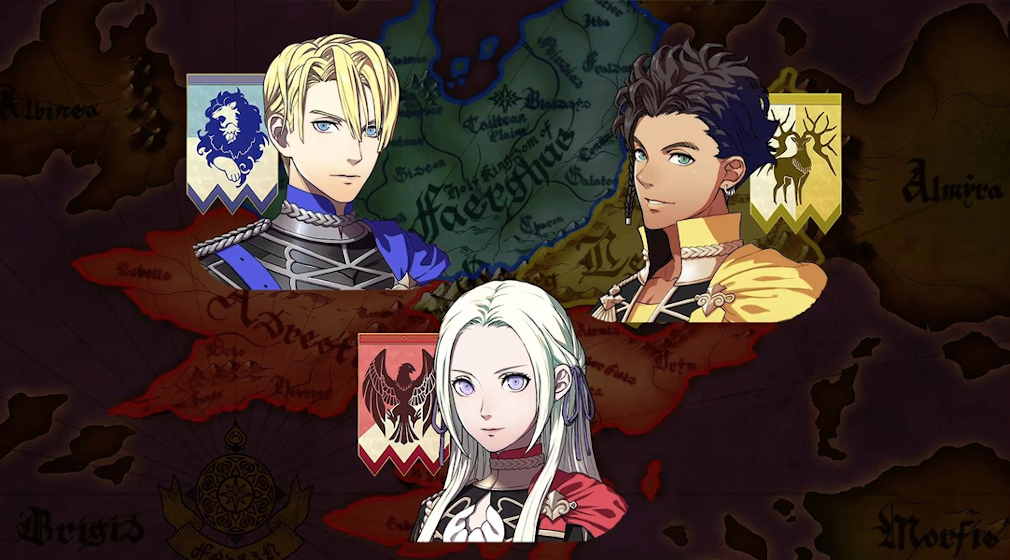 ​
The game takes place on the continent of Fódlan, consisting of three nations and Garreg Mach Monastery, a prestigious school situated in the middle of the continent that accepts students, commoners and nobility alike, from all three nations. You play as Byleth, a skilled mercenary with family connections to the school, who rescues some students from a bandit attack and is offered a teaching job. Students at Garreg Mach Monastery are divided into three classes based on which nation they come from, each one led by the presumptive next leader of their country. Players are given the option of aligning themselves with either the determined and proud empress Edelgard, the haunted warrior prince Dimitri or the irreverent and mysterious outsider Claude. Each house has its own unique cast of characters, with different backgrounds, personalities, and combat abilities. Each house is distinct from a gameplay perspective, but this decision also makes a drastic change to the narrative, as it decides which nation you side with when war inevitably breaks out in Fódlan.

This branching narrative is the crux of Fire Emblem: Three Houses, for better or worse. While it's certainly interesting to see the war fleshed out from so many different perspectives, it leaves any one singular playthrough feeling unsatisfactory. Depending on which house you side with in the beginning, you will be left in the dark on some combination of the antagonist's motivations, the interpersonal dynamics of the lords, Byleth's backstory or the history and lore of Fódlan. Some routes will emphasize different themes as well, and some may emphasize fantasy elements over character development or tighter plotting. Since the choice on who to side with is made so early in the game, players are left deciding almost blindly what kind of game they’re playing, with only a few brief scenes with each lord to base their decision on. And since the first part of the game will have basically the same plot regardless of your decision, multiple playthroughs may not be enticing to players not interested in getting to know the characters of each house or experimenting with their different fighting styles.

Inversely, focusing specifically on one house gives a greater focus on character than most Fire Emblem games. Each house has eight totally unique students at your disposal, leaving the cast much more manageable than the 30-40 unit armies typically seen in the series. You have the option to recruit other students and faculty to fill gaps in your army, but these characters won’t participate in story segments, putting a bigger emphasis on your core students and making them feel truly important. Combined with the support system, it’s much easier to get attached to these characters than any other Fire Emblem cast. The support system has also been refined and feels much more organic than it has in recent titles. Units can no longer get married and will only have support conversations with those it makes sense for them to have deep connections with. The writing for individual supports has improved as well, with each rank feeling like a significant event, rather than filler to set up the A rank. The diversity offered by the cast, and by not forcing similar characters to have supports, offer a nice variety of conversations to deepen this world and these characters. They can revolve around, for example, the split between nobility and commoners, learning about each other's countries or the more traditional fare of two clashing personalities learning and growing from each other. While some characters are still one-note and played for laughs, those supports are often saved by the wonderful voice acting that breathes life into the material and manages to make the side characters feel as human as the main characters. 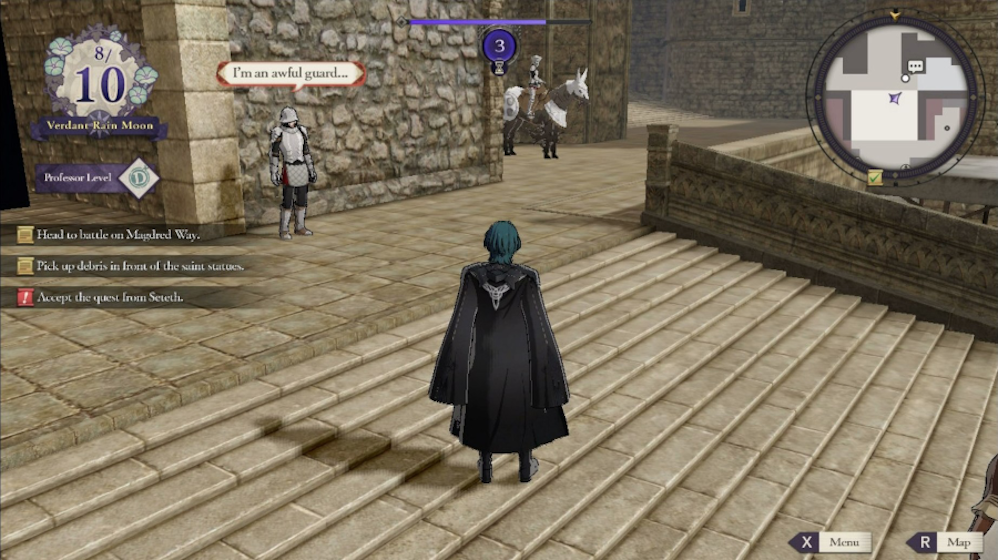 ​
The game also does a fantastic job of blending the story and gameplay, mainly through the hub world of Garreg Mach Monastery. Giving players a job, outside of battle tactician, does wonders to expand the game's world. As professor, it's your responsibility not only to teach your students to fight, but to guide their personal development as well. Activities in the monastery are restricted based on your Professor Level, which can be raised by answering questions from students, sharing a meal with them, leading them in choir practice, or any other mentor activities. Time management is also now a crucial part of the strategy here, with the game divided into months, and every month having four weeks that end in a free period, followed by a story mission. During the week, students will grow skills according to goals you have set for them (or they set for themselves). On their day off players are given the choice of taking the students to do side battles, holding a seminar to grow their skills further, or exploring the monastery, bonding with students and doing side quests. The monastery is the best kind of open world; dense with content and each section feels distinct so navigation is easy without using the map. The game will also get you set into these patterns and then disrupt them in order to drive home a point; late in the game, Garreg Mach is lifeless and dreary, or story missions may come without the usual month in between, increasing their urgency. These systems are surprisingly effective at immersing you in the world and getting you attached to your students. While the comparisons to Atlus' Persona series are inevitable, it never feels derivative or out-of-place; if anything, this feels more like a Fire Emblem/Shin Megami Tensei crossover than Tokyo Mirage Sessions #FE ever did.

All of this is here to support the battle system, and luckily, it's possibly the strongest the series has ever seen. The core combat is still the same, but the systems supporting it have all been enhanced. As mentioned, units can grow outside of combat, allowing you to tune their skills to your needs and making each unit feel more valuable since they're exactly what you need them to be. The levelling system has also been reworked to be more accessible, without losing the depth it previously had. In previous titles, units would have a level cap of 20, earning new skills up to that level, but would have the option of advancing to their next class at any point between 10 and 20, resetting their level but keeping any previously earned skills. Certain items could also turn any character into a specific class. Here, every character is offered the same classes (except for the few that are restricted by gender) and after spending enough battles as that class, will master it and get a key ability they can then carry to any other class. Units maintain their level throughout the game and unlock new classes at level 5, 10, 20 and 30, which they can switch to at any point. The core multi-classing strategy is still here, identifying the best combination of class skills and working to acquire them all, but not obscuring the information makes it easier for players to plan out their strategy. Having a higher number of total classes also gives a wealth of options to customize each character, and it's satisfying about seeing a character reach a class you've spent most of the game training them for. 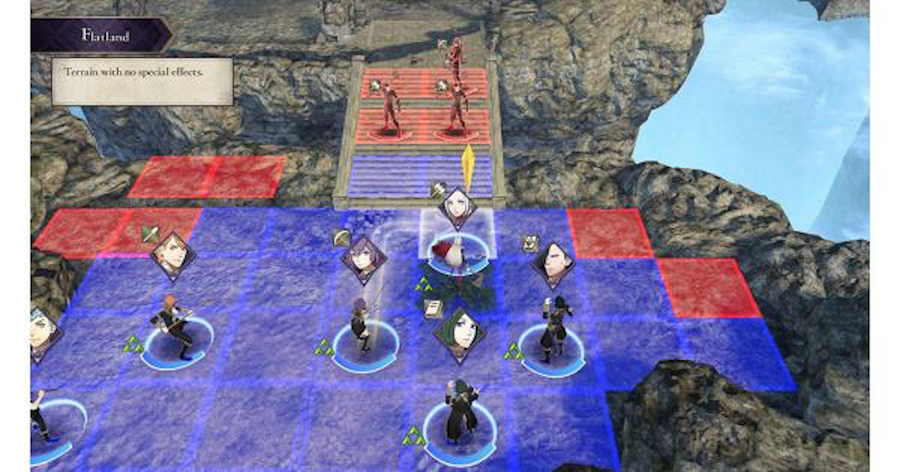 ​
Also new are combat arts, powerful abilities that are unique to certain classes and certain characters. Most are weapon attacks that greatly reduce durability but have special effects, such as increased damage, preventing enemy counterattacks or giving a percentage of health back to the attacker. Some can be done at no cost and may heal your unity or allow them to push another unit into a better position. Like abilities, only a few can be equipped at any one time so bringing the right combat art for the situation is vital. These enhancements make your units feel appropriately powerful, and for returning Fire Emblem players, there's a freedom to being able to pull off maneuvers not previously available, even in simple ones like extending the range of an archer. Similar to combat arts are battalions, equipable items that grant characters stat boosts and gambits, abilities that target one unit and have an area-of-effect nearby. Gambits seem designed to fight monsters, new enemies that take up multiple squares and have multiple health bars. Monsters have shields on each square they occupy that reduce damage taken, but if broken will stop counterattacks on that turn and if every shield is broken they will lose their next turn and give up rare crafting materials. Every time a monster appears it's an exciting proposition and a terrifying obstacle, the decision between taking your time and leaving yourself vulnerable or blitzing through the shield and losing the materials can turn the tide of a battle.

Given the success of recent Fire Emblem titles, it would have been easy for Intelligent Systems to allow this title to ride on being the series's first HD entry or its return to home consoles. Instead, they brought in an additional developer to help them build a lively and complex world full of memorable characters, supported by a deep combat system. Fire Emblem: Three Houses is a landmark title that will define the series for the foreseeable future.
Verdict
Chary and Scarlet like this.
Like this review