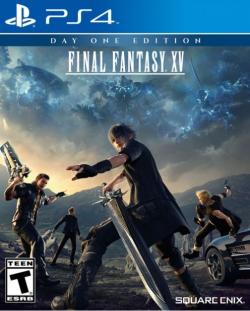 FFXV: A Final Fantasy for Fans and First Timers

Nope, I’m not making that title up, Squeenix saw to it to add that into the game as one of the first things you see every time you load it up. In my opinion, I think it’s a poor statement, and this review will cover some of the main reasons as to why.

To start off, we’ll talk about our boy band characters. First, we have the main playable character Noctis; a prince and future king of a place called Lucis. With our future king are his “body guards” and friends Gladiolus, Ignis, and Prompto (or, as I like to call them, Muscles, Brainy, and Annoying character tropes.) The game starts out with your little band of boys selfie-ing their way to a neighboring city called Altissa so Noctis can wed his hotty fiancée, Princess Lunafreya of some other neighboring kingdom. Woooo alliances and stuff. Of course, as with any Final Fantasy game, something goes wrong and now you’re forced to save your kingdom from an evil empire! Oh no! Unfortunately, the story is a bit...lacking for the most part. I don’t really get the sense of urgency you should really have in a “save your kingdom” type emergency. I also feel like you miss out on a lot of important or useful information if you don’t watch the movie or anime shorts that provides some “prequel” information on the world.

Right away you’re thrust into the open world environment, employing a more “MMO” feel rather than the typical “hallway” gameplay that the more recent Final Fantasy games used. The world is filled with different outposts, random buildings, campsites and other such places where you can take part in various activities. In order to travel this vast world to fight the baddies, you’re given the Regalia, a car that probably costs more than most of the outposts you visit, but we’ll talk more on that in a moment. Instead of being tied down to a main quest, in the beginning you’re simply free to do whatever you feel like at your own pace in the world. There are sidequests, hunter contracts, fishing spots, photo spots, chocobo racing, and other such things you can do instead of progressing the story. While this may sound great at the start, unfortunately (like most MMOs and overly open world games) you’re simply being drowned in fetch quests, “exterminations” and the occasional “bring me 1 XYZ please”. Side quests just blend together, and there are few that stand out from the bunch. The world of Eos is an interesting one, taking on a more modernized approach instead of only relying on the standard “EVERYTHING IS MAGIC OR STEAMPUNK” cliché. There are straight up modern vehicles, gas stations, smart phones, video games and other modern conveniences, but it also pairs them with things like Magitek armor, flying ships, and magical weapons summoned from nothing in order to keep the fantasy setting.

As I mentioned earlier, traversing this world is mainly handled by your personal car, the Regalia. You can customize your car with various paint jobs, decals, and interior colors as well as upgrade various components like a bigger fuel tank. You can also purchase previous Final Fantasy soundtracks to listen to as you drive your way to wherever it is you’re going which is a nice touch. There are two modes of travel while in the Regalia, auto and manual. In Auto mode, Ignis drives you to a designated point, whether that’s a quest location or another outpost you’ve discovered in the world. You can use auto mode to fast travel to already discovered locations if you want to skip a long drive, however it (for some reason) costs you 10gil in order to do so. Manual mode is, as the name suggests, where Noctis (AKA the player) takes control of the vehicle, and can drive the roads wherever you please. Unfortunately, manual mode doesn’t necessarily give you as much freedom as you might think; you’re limited to driving on roads and, for the most part, in your own lane. You can’t really GTA your way to your destination or go off road, hitting vehicles takes precise timing as your car (and the other vehicle) will automatically slow down to avoid damage. While a little disappointing, I suppose it makes sense in that the Regalia is basically the only way to travel vast distances quickly.

Combat in Eos is also vastly different from the average Final Fantasy game; instead of random encounters and going into a separate combat area/mode, enemy encounters are seamless with the overworld and combat is action based. No more menu inputs, no more waiting to attack, combat has basically evolved to in-your-face, bring it on non-stop almost button “mashing” (or, in this case, holding down a button). Thankfully, combat has a bit more depth than you would think based on that basic description. You can use the left stick to change up the way you attack while holding the attack button, Noctis has different weapon types that he can use and chain into combos as well, and you have various techniques you and your allies can make use of in desperate situations. Noctis can “warp-jump”, where he throws his weapon at an enemy and warps straight to them, dealing various amounts of damage based on range. You can also warp to different points in the area where you can heal up or “strategize” if you need to. Allies can perform special “teamwork” techniques, like Ignis’s ability to mark enemies that Noctis will warp to and attack or Gladiolus’s “I’m just going to hit them really hard”. You can also block and parry enemy attacks and do massive damage ala Dark Souls. Magic is also an option during battles, and can be created by absorbing elements in the overworld and fusing them together with Elemancy. While using magic can be a great benefit, as it does massive damage, it can also hinder you as your allies can also get hit as well. If you can’t handle all that fast pace action, you can turn on “wait” mode which basically pauses the game when you stand still so you can strategize a little bit before continuing to bash the shit out of enemies.

Leveling is a bit different in this game as well. While you still receive EXP after battles and quests, the actual leveling up doesn’t occur until you stop at a camp site/hotel/rest points. Unlocking additional abilities and techniques is done with the Ascension Grid, which is honestly just a giant confusing mess of options and abilities and things that I just don’t care about. Ability points are gained from battles and quests as well, and you can unlock the ability to earn AP from various other sources like driving long distances, riding a chocobo a lot etc etc. Overall, for the most part, I simply kept forgetting to spend AP points. The only useful stat bonuses you can get in the game come from accessories instead of the Ascension Grid, which makes focusing on leveling a little...difficult.

Graphically, the game looks great at first. There are various types of areas you’ll come across in the game, such as the desert you start out in, a big hill-y area, a rainforest type place. Even a little beach where you can enjoy the invisible walls in the water! Unfortunately, there a few…technical issues that plague the normal PS4 version of the game (I can’t say about the Xbox One version, and I’m told the issues I’m about to talk about aren’t present in the PS4 Pro). To start, running through most areas, you’ll begin to notice a lot of HQ textures pop-in all around the environments. Textures on an outcropping of rocks will make a jump in quality at a close distance which is very noticeable and a bit jarring, the same goes for random trees and sometimes even random buildings. Large bodies of water also have the same issue, but to an even worse extent. It’s tough to put it into words, so I’ve included some screenshots of the massive graphical glitch I encountered in part of the first area you get to. The framerate of the game is stable in most areas, but will noticeably drop when you get into any big outpost/city. The camera is also a bit wonky at times, especially in enclosed spaces, where you’ll be zoomed in so far, you’ll be inside another character or when little “cutscene” dialogue things happen between the members of your party it’ll straight up miss the main characters completely. Lip syncing during cutscenes is also appalling, and the voice acting gets a bit cringe-y at times as well. I’d honestly say both are nearly as bad as Final Fantasy X in terms of actual quality.