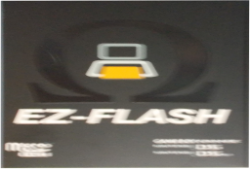 Does the EZ-Flash Omega deliver as a reasonably priced, drag-and-drop GBA flashcart for those seeking to consolidate their game library to a portable solution while staying very true to the original hardware?
The EZ-Flash Omega introduces a substantial number of improvements over the earlier, comparable EZ-Flash 4 putting it in line with the EverDrive GBA X5: very fast load times, the ability to use unpatched ROMs, and direct saves to the memory card (an improvement over even the EverDrive GBA X5) while in a much smaller former factor and substantially lower price. All of these are compelling reasons to consider the EZ-Flash Omega even with its various quirks.

Edit (2018-05-14): It's been over a month and most of the issues and concerns have
been addressed as of Firmware 4 Kernel 1.02, so this review has been updated to
reflect these changes.

Note: As a starting disclaimer, I received a review copy of the EZ-Flash
Omega for free. Even without the free copy, as a long time fan of the
EZ-Flash 4 I was planning on purchasing the EZ-Flash Omega just to see
if it would be a worthy successor to the EZ-Flash 4.

The promise of near-instant starts and direct saves definitely deliver.
While total time game load varies a little on the speed of your microSD
card, whether a save file needs created, and the size of the game itself,
the average time for me was in the 3-5 second range even on 32MB games.
In comparison, the EZ-Flash 4 and EZ 3-in-1 can take 30 seconds to load
16MB games or over 5 minutes for 32MB games that have to be written to
NOR to be used. Afterwards NOR games can be loaded instantly from NOR
but with only 32MB of NOR and the slow write speed this obviously discourages
frequently loading different games to NOR.

Compared to a NOR-only flashcart like the Flash2Advance and the results
are still comparable to the EZ-Flash Omega. The NOR is written earlier, so
game launching should be instantaneous. However, many games require
a soft reset to function properly, bumping up the start time to 3 seconds.
If you so desire you can write up to 64MB to NOR on the EZ-Flash Omega, but
the 32MB PSRAM has made the NOR space entirely redundant for me--as of
this review the Original GBA can't properly use NOR.

The save file itself (and Real Time Save (RTS) if selected) are created at
game launch in respective \SAVER and \RTS folders and written to as
save/RTS is updated File extension are .sav for GBA games, .esv for
NES/GB/GBC games, and .rts for GBA real time saves. As noted in the
manual, there's a time delay before saves are fully written to the microSD
card and personal experience has had me counting to five before resetting
or powering off the system. For NES/GB/GBC games this means first
pressing L+R to open up the menu and then counting to five before choosing
exit or powering off the system.

Resetting or powering off too quickly will cause some pretty substantial filesystem
corruption and likely require a reformat if done more than a few times. Since
carefully counting to five for each save, I've had substantially less problems. However,
on an exfat formatted card I experienced errors while launching a game and my
exfat required reformatting. I've yet to reproduce this problem, and I'm unsure if
it's limited to exfat or the microSD card. This is a real concern for me as it's not always
100% clear when a game is saving.

For the filesystem itself, you have the options of FAT16, FAT32, and ExFat
(if using a 32GB or larger microSD card) on a separately purchased microSD card.
Having tested all three, they all work equally well. Realistically the entire GBA
library from all regions combined is less than 32GB, so there's really little reason
for even most hardcore collector to need a microSD even half that size.

Folders with the archive bit are hidden from view and files without the archive bit are
invisible; I'm uncertain why but on my Linux system folders on exfat are created with
the archive bit set which definitely caused some confusion at first. File listings are very
responsive. Pressing Select allows you to toggle a display of the current games
title screen with virtually all included in EZ-Flash's thumbnails archive. Games need to be
copied over uncompressed and can be arranged in nearly any folder arrangement you like.

The EZ-Flash Omega is incredibly close to just drag-and-drop. The few counterexamples
are games that require patching to support a solar sensor or a gyroscope. Some notorious
anti-piracy protected games seem to work without any special patching, but YMMV. The
EZ-Flash Omega thankfully has a Real Time Clock (RTC)--like the more expensive EverDrive--
so those games are drag-and-drop as well. The EZ-Flash Omega can "Boot With Addons" to
support their built-in menu/reset/sleep/rts/cheats and by default has a database of virtually
all games making their fast engine patch near instantaneous.

If you're more adventurous or have a game that needs manually patched (the previous
mentioned odd-ball games, translations, or other romhacks not in the database), you can
disable the fast engine patch on the options screen. Instead of using the fast patch defaults,
each game will be scanned on first start which can take from 4 to 30 seconds. A .pat PATCH
file will be written for current and later used. Later loads take virtually the same time as
fast engine patched games.

If you like, you can also choose to do a "Clean Boot" to have no patching applied. This should
eliminate any possible GBA link or other patching compatibility issues. Direct saving will continue
to function. The generous 64MB of included NOR can be used for "Clean Boot" or "Boot With Addons".
As all GBA games are 32MB or smaller, loading through PSRAM for most games should be sufficient.

A little experimenting with cheat support and it works decently well. I did notice a very slight
clicking/skipping sound not unlike other software cheat engines on the GBA. It was only audible
while cheats were on and I presume the severity of it will vary by game. It wasn't at all distracting
to me, but it is something to consider.

The one major addition to the EZ-Flash Omega that I cannot recommend is Real Time Saves (RTS).
Due to the nature of the GBA, it's not possible to save or restore a perfect copy of the state of the
GBA at any given time. As such, it's very hit and miss on whether a state will load or even freeze
the system. Also, the manuals note of "Sound turn to noise after load game states" seems like an
understatement with my testing of Metroid Fusion. Ninja Five-O seemed to load saves okay but the
audio was a bit muted. Mega Man Zero 3 simply locked up on loading a state. The suggestion
"change a scene should get the sound normally" from the manual did work for Ninja Five-O but was
ineffective with Metroid Fusion. RTS reliability is a known issue, and I'm uncertain if we can see more
than little improvement in future firmware.

The final part to consider is support for directly running NES and GB/GBC games. This is achieved
through the built-in inclusion of the (as current) latest versions of PocketNES 2013-07-01 and
Goomba Color 12-14-14 emulators forked by and heavily improved upon by Dwedit. While the built-in
PocketNES emulator is very decently compatible with many games (but compromising with squished
graphics and texts on the lower resolution GBA) with a few games like Punchout not working quite right,
Goomba Color is a little bit more hit and miss. The latest version of Goomba Color is definitely a
significant improvement on games like Shantae, Megaman Xtreme 2, and others with very few
graphical glitches or slowdowns. But other games, like Lufia - The Legend Returns have much more in
the way of graphical glitches. This picture shows the first island...sort of.

This is by no means a criticism of Goomba Color or the EZ-Flash Omega. There's very little wiggle room
to support GBC emulation on the GBA, and I've found using older reset patched (so exit in the menu works)
versions for the EZ-Flash 4 to work reliably on the EZ-Flash Omega. Going into building compilations is
outside the scope of this review, but it opens up supporting emulation of various other systems like the
Sega Master System, Game Gear, and Colecovision. If your focus is on NES, GB, and GBA games, then
drag-and-dropping the vast majority of them uncompressed will work near flawlessly. It's really only
Gameboy Color where it's more hit and miss. I would honestly recommend getting a separate GBC flashcart
if you're very interested in Gameboy Color games unless you're willing to tolerate this. For my purposes
Goomba Color is more than sufficient most of the time.

First, I would seriously recommend reading through the entire EZ-Flash Omega Manual. It does a reasonably
good job of explains the ins and outs of using the EZ-Flash Omega along with a few caveats here and there
throughout. As stated in the manual, make sure you download the latest kernel/firmware, cheats, and thumbnail pack.
Copy the ezkernel.bin, CHEATS, and IMGS folder to your microSD card. Hold R at startup to update with the
ezkernel.bin. If your firmware is older than the current version, it will also have you update it as well. Once done,
you can delete the ezkernel.bin.

From here, you can start making folders and adding your gba, gb, gbc, and nes games. Repeated again here,
always wait at least five seconds after saving in a game before resetting to the EZ-Flash Omega menu or powering
off the GBA. For GB/GBC/NES games, wait at least five seconds in the L+R menu before choosing "exit" or powering
off the GBA. If you want to enable RTS/Cheats/Sleep--the builtin sleep in most/all games won't work--you can go
two screens over with R, R. The middle screen is where all NOR written games can be launched.

For nearly every game, I start with "Boot With Addons" to use the menu/reset/etc. The menu will only show up if
you enable RTS or Cheats are enabled and some are. In all other cases, pressing the menu key will reset to the
EZ-Flash Omega menu, so be careful when saving. The menu seems to take the gamma/palette of the screen for
drawing, so be aware that the menu may appear dark depending on precisely when you open the menu. In one
instance the system froze on the title screen while trying to access the menu. I have also had to Clean Boot one
romhack for it to boot. A quick test of a Classic NES game and it appears the games built-in menu interferes with
EZ-Flash Omega's menu opening.

Overall, I've quite impressed with their patching system. Hiccups like the above are to be expected, so it's nice
Clean Boot is an option.

A small note about the EZ-Flash Omega case

The EZ-Flash Omega is quite a snug fit into my GBA SP. The actual electronics are only about the size of a NDS Lite
dust cover and the GBA-size front shell leaves a T shape that is easy to scrape against if you have the bad habit of
pushing GBA carts out at sort of an angle rather than pulling them directly out. The microSD slot on the side is a
little bit big so it'd be easy to accidentally drop your microSD card inside. The microSD slot is flush with the back
shell, so pushing at an angle is can damage your microSD card. Pulling straight out in both cases might require a
bit of force but shouldn't result in any scraping or damage.
Verdict
You, unz, Mark2333 and 5 others like this.
Unlike this review