From Krikzz, the makers of what might be the most venerated flashcarts, comes the Everdrive 64.

Ah, the N64. A staple of many a childhood, no doubt. With its unique system of bilinear texture filtering, N64 games had a look unique from its competition at the time. It’s a little machine with a niche appeal still loved to this day, but while the console’s library still enjoys popularity due to games like Super Mario 64, Ocarina of Time, Majora’s Mask, etc., the act of properly emulating some of the more obscure games can still be a bit tricky. This is where the appeal of playing on original hardware comes in, and the people at Krikzz have endeavored to make this process as easy as possible with their Everdrive 64.

With their reputation for making high-quality, premium flashcarts, it’s not unlikely you’ve heard the name “Everdrive” before. Krikzz produces and sells a variety of different flashcarts, with different versions providing different breadths of features. 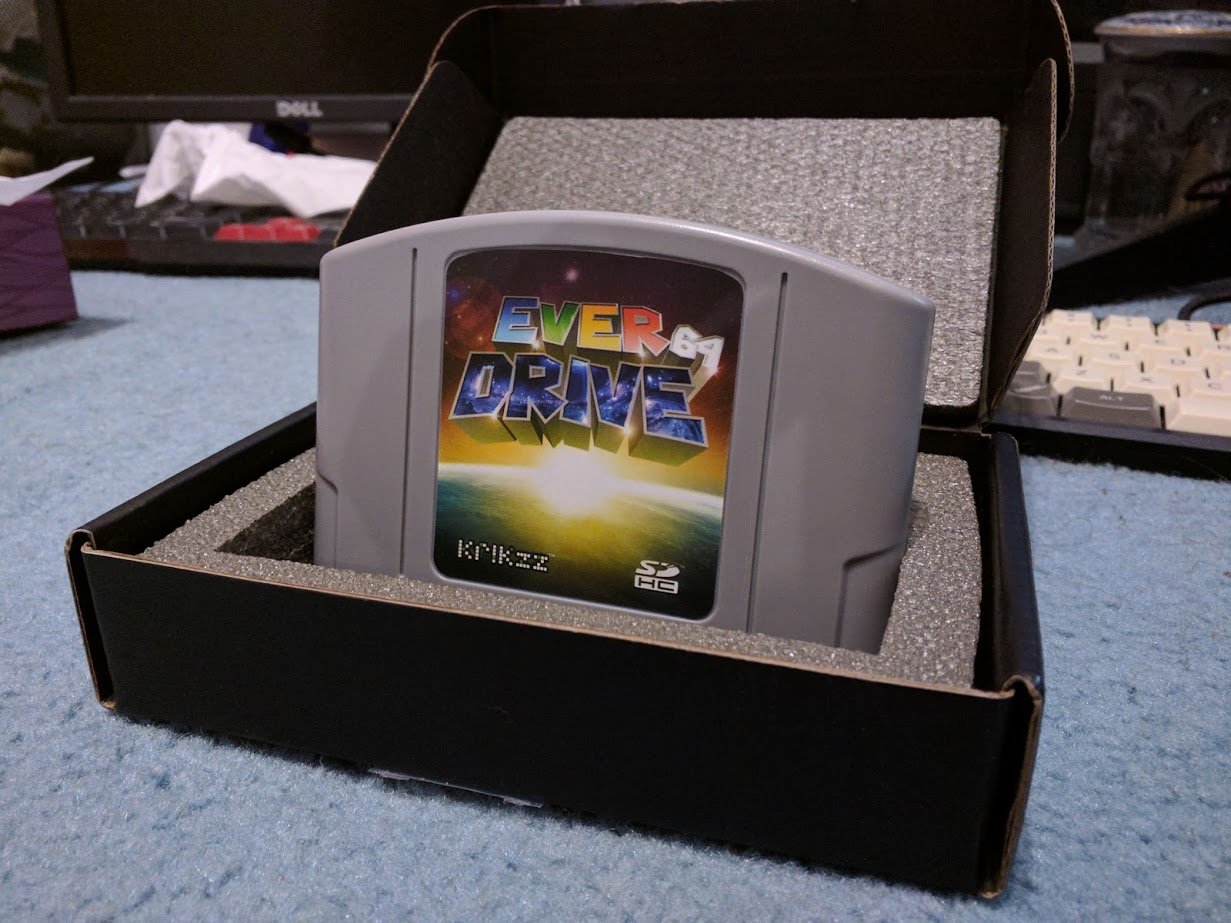 The Everdrive 64 allows one to load N64 game ROMs (with the extensions n64 or z64) onto an SD card (formatted to FAT32) and play them on your N64 with no emulation involved. While cards over 32Gb can’t be formatted this way via Windows, I used a third-party program to format my 64 gig in FAT32, and I’ve not experienced any issues yet. In this way one can run all manner of N64 games, vanilla and modded, on your real-life N64, on a CRT, without the need to swap cartridges.

In order to get it up and running, all that’s required is that one download the latest firmware from krikzz’s site, and move the folder onto the root of your SD card. Aside from that one requirement, there aren’t really any further directory requirements for anything else, as the cart has a built-in file browser allowing for easy navigation of files. You can put the ROMs in folders categorized alphabetically, make a favorites folder, or just do what I did and dump them all to the root, anything works.

The Everdrive supports both PAL and NTSC regions via a Switch just on the inside of the SD card slot at the top of the cartridge. When looking at the face of the cart, having the switch to the right puts it in NTSC, while the left is PAL. These aren’t externally marked, but are on the circuitboard itself. Still, all it takes is one try to find out if you’ve chosen the right direction.

When booting the console, you’re put directly into the root of the card, with all files and directories shown. From there, selecting a ROM brings up a menu with the options “Select and start”, “Select only”, “ROM info”, and “Hex View.” 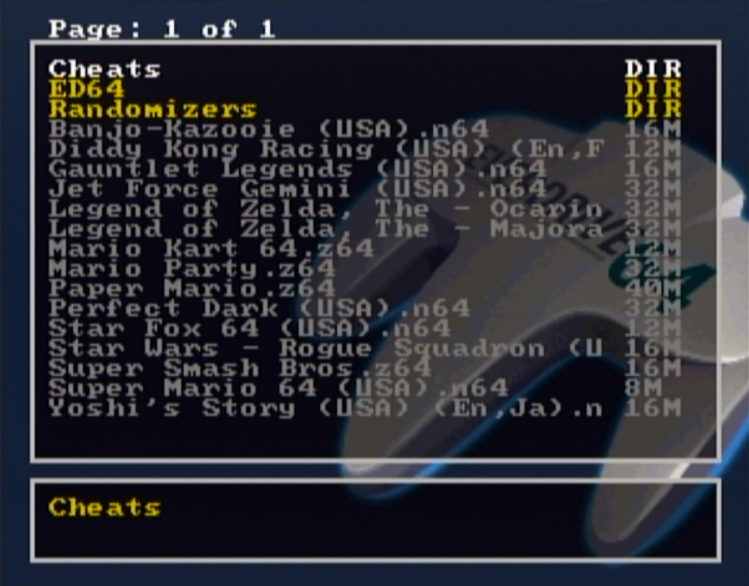 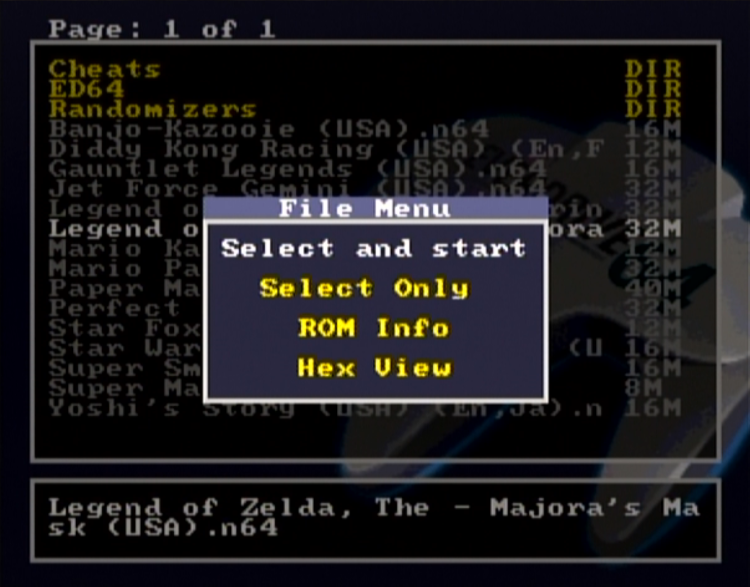 "Select and start" loads the game and begins to play. "Select" will only load the game into memory, but not run it, allowing one to toggle settings and load cheats before pressing the start button to play it. ROM info lets one see the rom ID, the save type, TV type, CIC, Byte Swap, and the CRC HI/LO numbers. Hex view is a bit confusing, as it allows one to seemingly scroll through the entirety of the rom in hex format, but make no alterations. Without the ability to edit, I wonder how much utility this would have, though it's an understandable limitation.

Gameshark codes can either be entered manually before starting a game, or loaded from a text file. When in a text file, the codes need to be stored in the order of Address Value Description, where the value is 4 digits long. For example, a Perfect Dark cheat file could look like this:

When the text file is selected, you’ll have the option to load the cheats into memory, or to append the cheats to what you currently have loaded. The cheats must be loaded after selecting a game file, but before running it, as selecting a game clears the cheat menu. While these loaded cheats can be viewed and individually turned on/off before starting the selected game, no descriptions will be shown for them, so you’ll need to remember which is which. 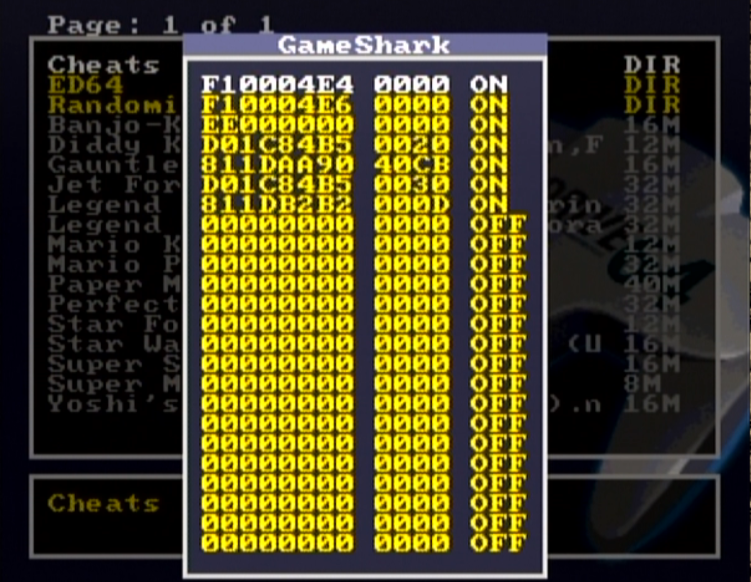 Additionally, the Everdrive sports the option to have cheats auto-load when you play a game. In the folder containing the firmware of the device, there is a directory called AUTO into which the cheat files can be placed. They must have the same format as mentioned before, with the addition of being named the same thing as the ROM file you’re loading.

Unfortunately, only up to 24 lines of code in total are supported, which is quite restricting, as the master code for Ocarina of Time alone is three lines. Still, from what I’ve read, this is a limitation of the N64 hardware itself and not the Everdrive, so there’s nothing to be done about it. For longer modifications to the game code, you’ll need to use IPS or APS patches.

That the Everdrive can patch games as they’re launched is a great feature to have, considering many games require patching to be compatible with the hardware. Banjo Tooie (NTSC), DK64, Jet Force Gemini, and Star Wars Episode I - Racer all require patching to run, and by putting said patches in the AUTO folder and enabling Auto IPS/APS patching in the main menu, you can run these games without the need to fiddle with configurations every time or to permanently modify the original rom files.

Um… what? Well, yes, that’s actually correct; the Everdrive comes with an old NES emulator. It’s deprecated, and it doesn’t support all mappers (i.e. not all games will run), but it’s certainly something to fiddle around with for fun. Just don’t run the emulator without putting an NES rom in there first, otherwise it’ll initiate an error loop that you need to fully shut off the console to escape.

A handy chart has been provided by Krikzz themselves to help show the differences between the two cart versions being sold:

The biggest difference here is the existence of RTC support (or real-time clock.) This allows the v3.0 to one more title than its 2.5 counterpart; the Japan-exclusive game Doubutsu no Mori (Animal Forest). I'd previously thought that this missing RTC feature was responsible for the cart's incompatibility with Pokemon Stadium 2, however as this user has pointed out:

From @TangentingTangerines: The Real-Time-Clock has nothing to do with the Pokemon Stadium 2 incompatibility.  Instead it comes down to Everdrive 2.5 not having it's own dedicated save system.  In Everdrive 2.5, saves are handled by the same area of part of the Everdrive that loads the rom, and this part has a very strict 64mb limit.  Pokemon Stadium 2, unlike Conker and RE2 which don't use up the last 256kb of the rom does use this space for vital game data.  So basically as you save Pokemon Stadium 2 the save slowly begins growing larger and encroaches on the Rom eventually corrupting the rom and deleting the save data.  The only way around this would be to create a patch for Pokemon Stadium 2 that deletes enough pointless data off the rom to make it so the save data and the rom files no longer conflict, and supposedly this is incredibly nearly impossible.

Before the inclusion of the UltraCIC chip, there were 3 games which were largely incompatible with the Everdrive:

However, as user @YOUCANTSTOPME pointed out in the comments (much thanks, by the way), the latest OS update allows Dezaemon 3D to be played without issue. In addition, the UltraCIC II bypasses the need for any cracks/patches to Banjo Tooie, making those games completely playable as well.

Every other title on the N64 apart from those mentioned are reported to be fully compatible, so compatibility isn’t something one will ever need to worry very much about with these products.

Game hacks are another story altogether, and their playablility can vary heavily. For the most part, simple hacks like randomizers will work without issue, and hacks with custom textures seem to do fine, from what I’ve read. While there are many hacks which are incompatible with the Everdrive, there are many others which work fine. There’s a semi-recent post on Krikzz’s forums here which attempts to collate all the working hacks, but I’m sure there are more out there. As an addendum, the Master Quest version of Ocarina of Time, released on a Gamecube disc and emulated by the Gamecube, had its rom ripped, and is fully playable on both versions of the Everdrive. This makes the Everdrive all the more tempting, as one doesn’t need to deal with the various quirks of low-quality emulation in the Gamecube release, such as input lag and overly sensitive aiming.

The other major difference is the fact that it will save to the SD card without the need to reset the console first. With the 2.5 (the one I currently have), one needs to press the reset button once after saving so that the save can be written to the SD card before powering off, whereas with the v3.0, the save is written in-game.

The missing USB port is for development purposes only, so as a consumer, you won’t be missing anything by not having this feature, however developers would want to go for the v3.0.

The v2.5 is priced at $118 USD currently, where the 3.0 is $193. Considering functionality is so closely matched between the two, I’d recommend the v2.5 for any everyday consumer, unless the need to reset one’s console before powering it off is an unacceptable inconvenience. For those looking to develop on the device, the 3.0 version is necessary. 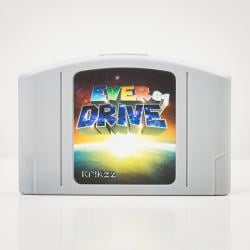