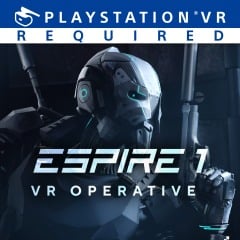 PSVR games are my jam right now, hoping this one scratches a few itches.
VR is the perfect stage for innovative first-person experiences but can Espire 1 VR Operative live up to the self professed title of "definitive stealth experience"?

Set in Australia, this game comes out the gates with an air of intrigue and a veil of mystery; what is this all about, why is any of it happening, and is that Dr Doak? Espire 1 VR Operative is an inception style game about a character getting inside and controlling a super soldier android marionette from the Espire project, which means you assume a character, who then gets inside a robot, who you then control. The key standouts in the opening scenes are that there a high-security research and development black sites came under attack and they do not want their top-secret Espire technology getting leaked to the public, so use of deadly force is granted, just so long as you're not seen. 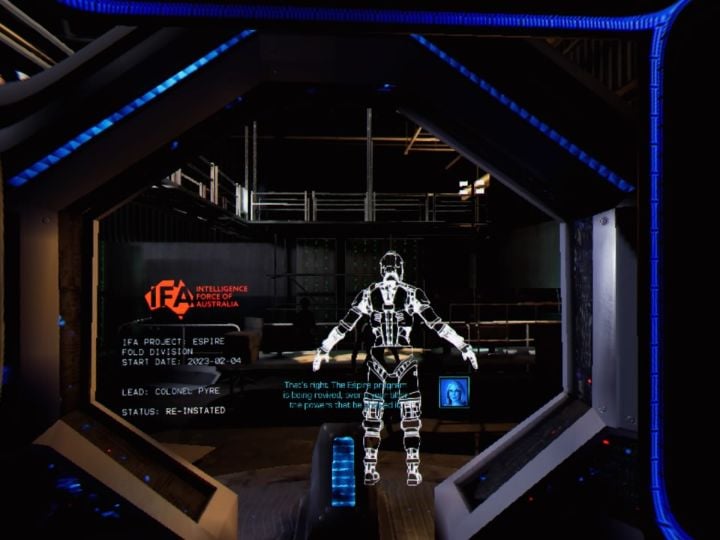 Given its Australian roots, the game's characters all have a wonderful upward inflexion that endears itself with its heritage and reminds people that Australia exists and could have some amazingly advanced secret technology up its sleeve, but mostly that it's science fiction and it appears that Crocodile Dundee has apparently voiced every grunt in this game. The story is compelling and the tech involved is extremely Iron Man-esque which makes you want to explore more and envelope yourself with the tasks at hand. You start out in a glass box in a laboratory where you activate your first Espire unit and get accustomed to the movement method and button configuration. This game uses a VR within VR techniques to reduce motion sickness by eliminating user locomotion altogether. The main buttons propel your character forward while the direction you hold your moves pointing towards dictating overall motion vector. The X and O buttons twist your character so should you need to turn on the spot there is an easy method, while simply turning your head and moving while holding the move controllers at a 90-degree angle allows you to strafe and even peek in and out around corners easily.

The VR weapons and gadgets attach to your chest and belt, which you have to align within the first two minutes of play, allowing you to adjust the size and height of your virtual utility attire to your suitings, depending on whether you're seated or standing. Initially, I found this rather difficult to adjust to being usable, purely because the weapon holsters didn't feel like they were on my hips. It felts slightly above that, which caused my arms to have to be in an unnaturally bent position to grab a weapon. After a few attempts, I got it adjusted suitably and carried on with the chest gadget tutorial, whereby you clip your repair tool and your main weapon to your chest. I found that it placed my weapons a little too high up and it obscured my downward glancing vision at first, so again with adjustment, I managed to get it so they were barely in my periphery. With my virtual tools established I went on to discover that dropping the repair tool on the floor points the way you need to go to complete your objective via a visual laser track on the floor, which initially lead me to a door where I had to take damage in order to gain entry to the next part of the mission. This was a cunning method for you to get hurt and learn how to use your repair tool to patch you back up again. This is done by waving your taser-like wand at glowing nodules in your VR hud and performing a mini-game of sorts where you simply electrocute and shrink the nodules back down to nothing, thus fixing your current health situation. 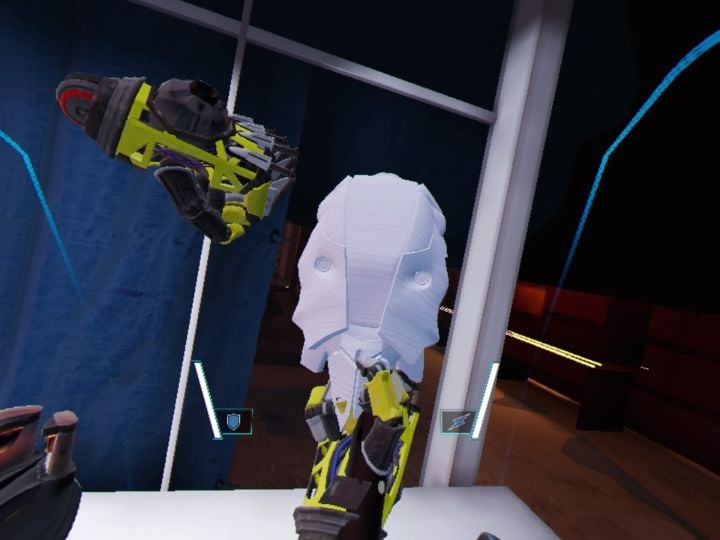 Climbing objects is child's play. By simply grabbing a metal object (this is important), you can form a grab-release-grab pattern, or other alternating movements, with your hands to easily scale any ladders, cables, or pipes you encounter. I found later on that in an amazing and inhuman feat of strength it is possible to grab and climb any metal item in-game horizontally as well as vertically, which leads to some very interesting investigation parkour later on. Throwing switches, hitting buttons, lifting gratings, zip-lining, and opening doors are all intuitive and incredibly easy to perform thanks to the well chose input methods and easy to understand controls. I did however come across several instances where I either lost my hands entirely or even stranger yet I could see my move controller model on-screen fused into my characters hand models. This caused my weapons to vanish or contort beyond my control, leaving me no option but to abandon them and hope for another one further in.

Gunplay in this game is immensely fun, especially when you locate the different weapons. You can hold a combination of machine guns or pistols with various attachments and associated pros and cons. Machine guns hold 40 rounds each, yet their accuracy due to recoil is terrible, even when using the holo-sights, but the silenced dart gun is 100% accurate yet it requires manually reloading between each round. With this in mind, there is a balancing act to be weighed out in your mind every time you gear up for your next mission. What is exceptionally fun is the sneak and interrogate elements whereby you use the PSVR headset to invoke voice commands such as "freeze" or "open controls". Shouting freeze not only causes anyone at gunpoint to realise they're completely screwed, drop their weapon and start trembling, but it can also inadvertently alert anyone else in the vicinity to your location. It is a clever little feature which I assume draws upon the pronounciation.xml in the PS4's disc structure to interpret voices. It's a nifty and edgy feature you rarely see on PS4 outside of the consoles UI, and it works nine times out of ten which is good enough for me. 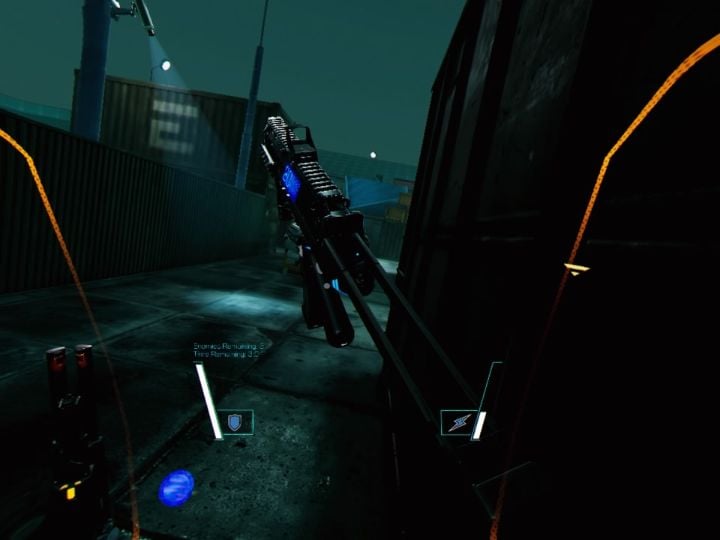 It will take around five hours to complete the campaign so it's not too long, however progressing through each mission grants you a new ability and a couple of new weapons to play with which makes each level a joy to explore and figure out everything that needs to be achieved. Some of the unlockable abilities include cameras on your hand so you can see around corners, slow motion, and even new vision modes with which to destroy the enemies more cunningly. The enemy AI is particularly dumb in most cases, freaking out and calling for backup before engaging you, and then when you do start firing they rarely take more than three bullets before they hit the ground in satisfyingly ragdoll manner. Enemies also have 20:20 vision apparently, and should you enter their line of sight you will alert them immediately, whether you're higher up or beside them, they're twitchy characters and they will spot you before you spot them. Even more satisfying is the fact you can either stealth around or go in guns blazing, either way, the situations unfurl into bursts of awesomeness, and you get a feeling of elation when you have disposed of them all and you're clear to move on. These moments get punctuated with slow-motion bullet-time style red alert moments when you are caught out, and this at least gives you a chance to react and counter any attack that is coming at you.

The majority of frustrations I hold with this game come purely from the VR interactions. One in particular in level two asks you to simply raise your hand to your head and pull the trigger to activate a laser detection mode, however for the life of me I could not get this to activate. I must have spent close to 15 minutes attempting to put my virtual hand against my avatars head and pressing every button to get it to respond, and not once would it work. I even ended up reloading the entire second level to redo that section and to my despair it caused me to load out of bounds underneath the map and I couldn't physically do anything but exit and restart the game to get back into the second level. The chest-mounted weapons also caused the issue of screen clutter on my screen due to the height of my character dropping down into its chest on occasion meaning all I could see was my repair tool or a machine gun, leaving only the top third of the screen visible to carry on my mission with. It felt like I was a 5ft kid wearing my 6ft dad's biggest suit for the first time, and with a swift hold of the options button, my height was reset and I could carry on for a few more minutes before it happened again, or the level loaded the next section. Between clipping issues and immersion-breaking moments where you can see your virtual move controller in your virtual hand, this game has its problems, but bugs aside, Tripwire is determined to improve this title and continually take on-board consumer feedback to make this stealth experience even better than it already is, and I have to say this game is a blast.

What We Liked ...
What We Didn't Like ...
7
Gameplay
Compelling futuristic missions combined with an entertaining combat mode makes for a fantasticly edgy gun-slinging stealth 'em-up which the console has been deeply lacking. PSVR issues aside this game has potential for future endevours.
7
Presentation
Incredibly well thought out storyline with simple yet compelling missions make this highly playable, however, on-screen subtitle text was crushed and jagged beyond any visual usefulness thanks to the relatively low-resolution PSVR V2 headset.
6
Lasting Appeal
Combat mode allows you to come back to it time and time again to improve your balletic movements through each mission to improve your times and accuracy. The solo campaign is relatively short and once it has been completed there isn't much to do the second time around except for using your new-found weapons and abilities from the start.
7
out of 10

Patch after patch, this game improves and matures into something special. It's the best of its kind in an undersaturated genre and it's entirely worth your time to investigate. Although it isn't a true "Triple-A" outing of a game; it certainly paves the way for greatness in future instalments or clones thanks to innovative stealthy gameplay and fun modes and exploration.
Reactions: T-hug, Jiehfeng, Mnecraft368 and 1 other person
Share:
Facebook Twitter Reddit Pinterest Tumblr WhatsApp Email Share Link
I've actually just started playing this on the Oculus Quest and it's really fun. I've heard that the PSVR version of the game has a lot of issues though.
Reactions: phonz and KiiWii
This looks really damn nice.