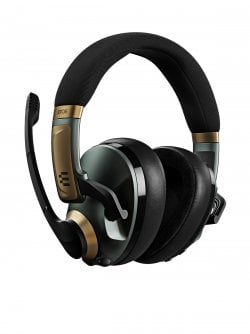 EPOS expands its H3 gaming headset line with two new colour variants of the H3PRO Hybrid: Ghost White and Racing Green. With EPOS’ traditional comfort, premium build and sound quality, is this wired/wireless hybrid a jack of all trades?

In another move to expand its gaming peripheral repertoire, EPOS adds two new colour variants to its H3PRO Hybrid line of headsets: Ghost White and Racing Green. I’ve had the opportunity to use the Racing Green one and will share what I think of EPOS’ first wireless headset since it went solo after parting ways with Senheisser.

As with other EPOS products, a premium price tag is attached to this device. The H3PRO Hybrid costs $279 / €279 / £239 and you’ll find the following items out of the box: 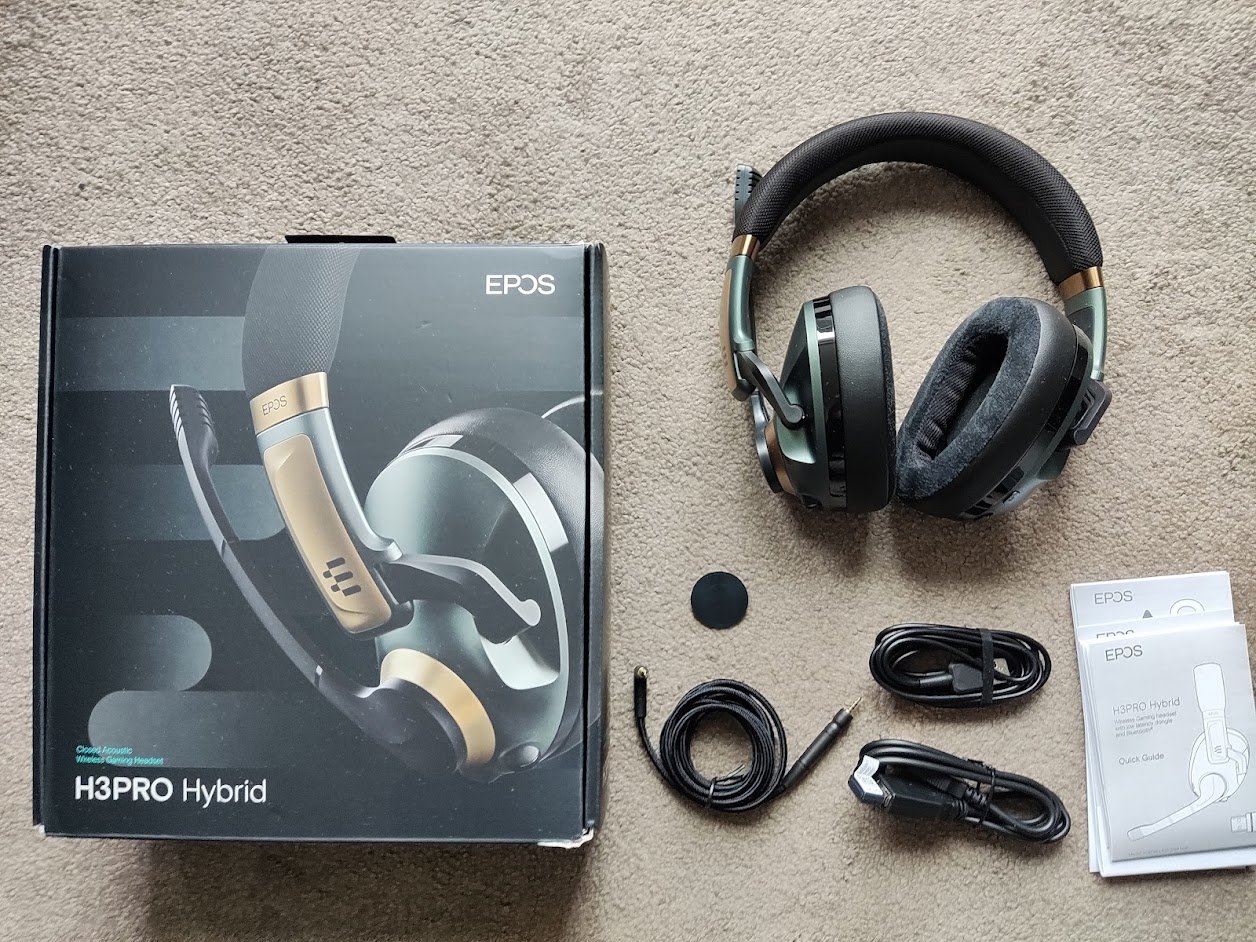 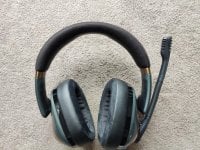 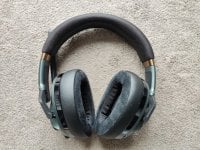 More details about the specs of the H3PRO Hybrid can be found below:

With this price point comes EPOS’ attention to deliver a premium product; and the H3PRO Hybrid looks and feels the part. The mesh texture of the headband feels really great to the touch and comfortable to wear especially with the faux leather lining on the side that comes in contact with your head. The swivelling ear cups also adjust effortlessly to most head sizes and their large size offers generous space for the ears, without pressing on them.

Given that the ear cups are well padded and lined with the same mesh texture as the headband on the inside and a velvety finish on the outside, this component of the headset also adds to the comfort. Those earpads are also replaceable, should you need a change due to wear and tear.

Moreover, weighing 11 oz, the H3PRO Hybrid is noticeably lightweight and I sometimes forget that I am wearing a headset altogether.

All in all, the H3PRO Hybrid has been designed with comfort in mind and it delivers a strong impression on that front. 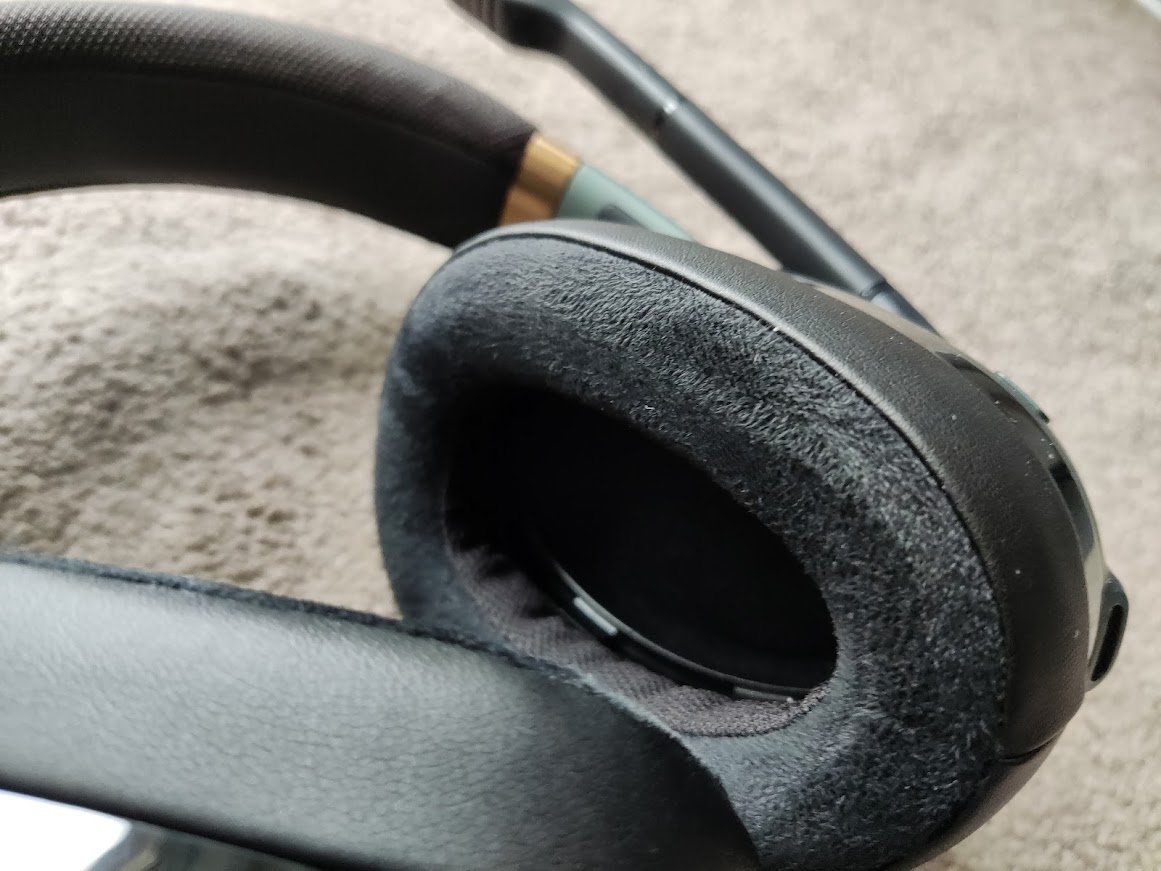 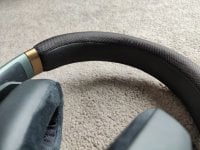 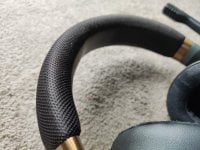 EPOS’ craftsmanship is also apparent in the device’s overall design. All of the controls are intuitively located on the headset itself. On the outer side of the right earcup, a volume wheel is concealed. And at the back of this earcup, you’ll find the Bluetooth pairing button and the ANC toggle.

The left earcup features a detachable and adjustable boom mic. You’ll also find on this side the power button, an indicator and ports for a USB-C cable and a 3.5mm audio jack. 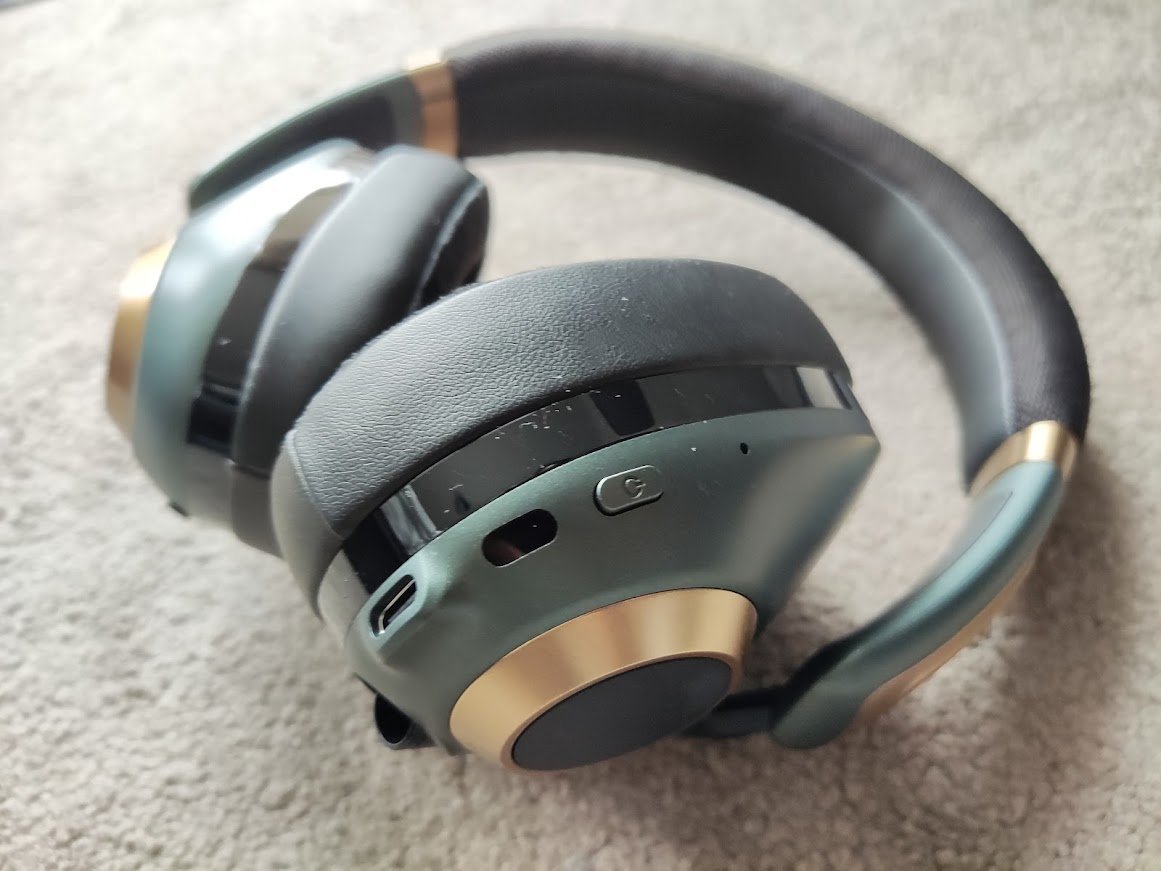 On the audio side of things, EPOS hits the bullseye yet again. With these headsets on, I’m easily able to track the movements of the pesky Yokai in Ghostwire: Tokyo and indulge in Jan Ravens’ voiceover in Trolley Problem, Inc. as she breaks the fourth wall and judges my in-game choices.

The output is crisp and balanced between the bass and treble whenever I plug it in, making it suitable to game or listen to music with. Moreover, further fine-tuning is accessible via the free EPOS Gaming Suite software.

Audio output from the boom mic is also crisp and decent, picking up the user’s voice thanks to its proximity. It also includes a handy “lift to mute” feature where, as the name suggests, lifting it will mute the mic, without the need to fiddle with any buttons. There’s also a second mic on the left ear cup for on-the-go calls which is of lower quality but is serviceable if you don’t want to have the boom mic while you’re on the move. 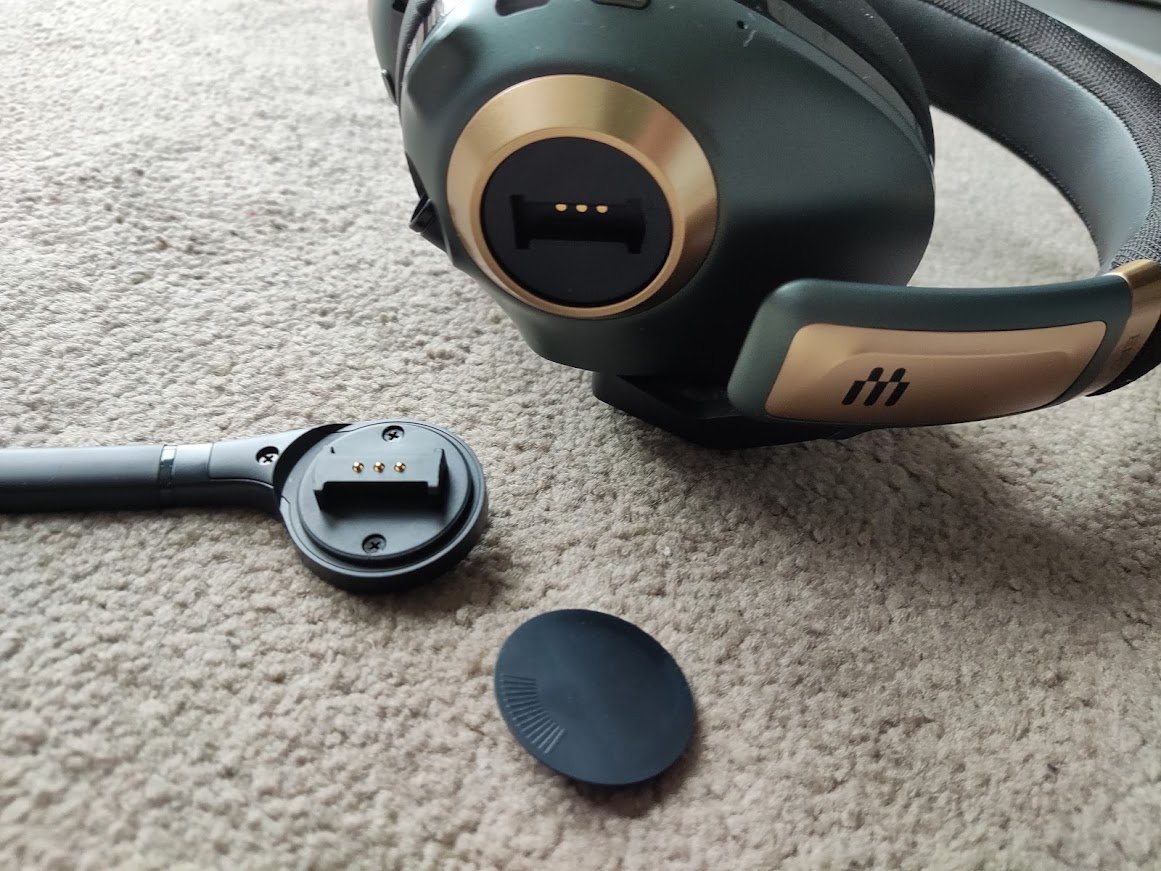 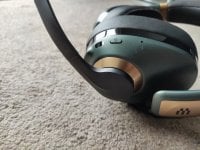 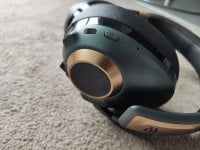 EPOS also integrates a handy Active Noise Cancellation (ANC) feature that you can toggle on-the-fly with the slider on the right ear cup. It does help to mask ambient noise to a certain extent but I wish that further ANC adjustment was possible, like across a gradient and/or via the EPOS Gaming Suite software. But the ear cups also help mask ambient audio with their closed design and deliver an up close and personal experience.

The major feature of the H3PRO Hybrid, as indicated in its name, is the wired/wireless aspect of the headset. For wired connections, you’ll have the option to plug the device to an audio source/gaming console with a 3.5mm headphone jack or a USB cable. As for wireless, a 5.2 Bluetooth connection ensures a stable, flexible and convenient paring to mobile devices. There’s an additional option to use the included low-latency dongle. It uses a proprietary wireless connection that ensures minimal latency (as low as 40ms) in wireless connection. This connection also carries the microphone channel back in parallel.

Whether you use the H3PRO Hybrid in wired or wireless mode, the audio quality is identical, meaning the output is clear and balanced.

When powering the headset on, there’s a handy audio feedback that indicates the battery level of the device. A similar feedback is also present when paring to an audio source.

Of note, the Bluetooth pairing button also functions as a “smart button” where you can use it to answer calls when the H3PRO Hybrid is paired to your phone. The button can also be configured with the EPOS Gaming Suite app to, for example, enabling/disabling surround sound. 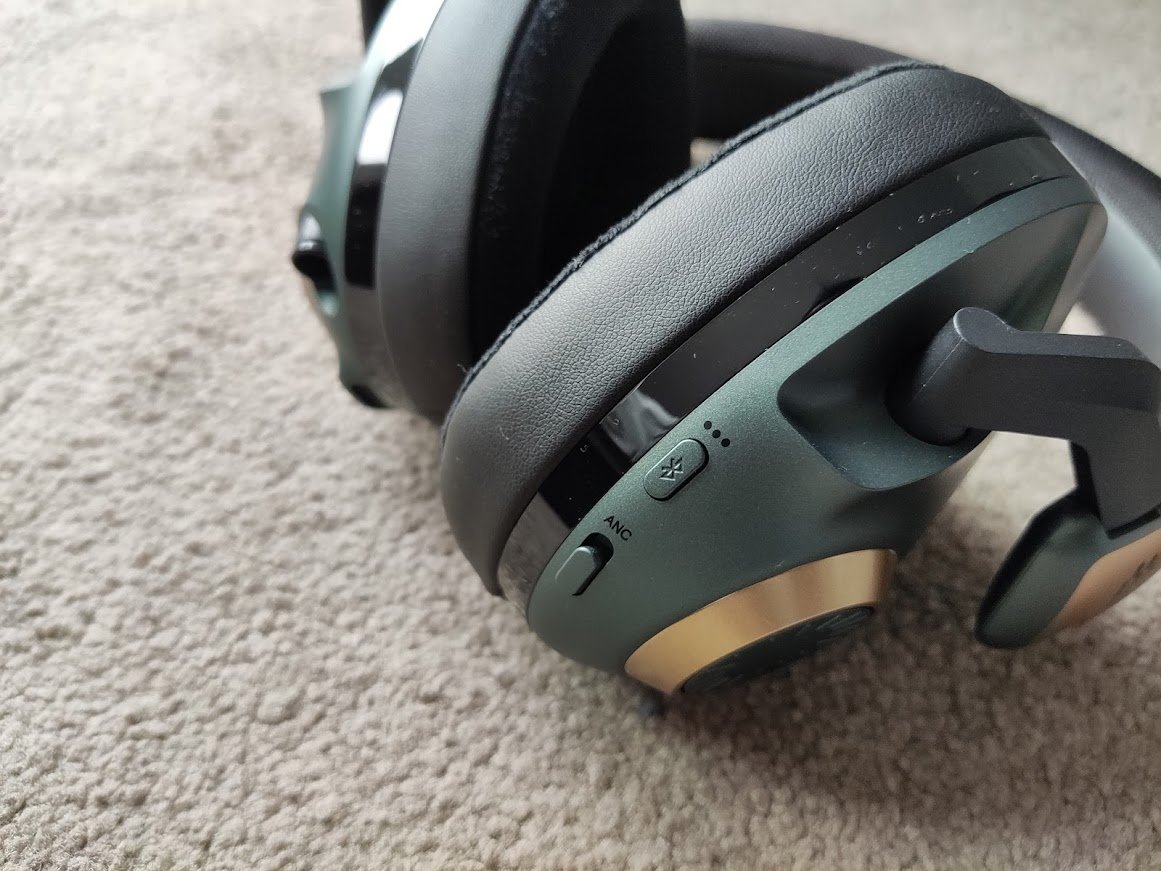 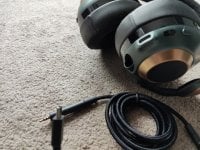 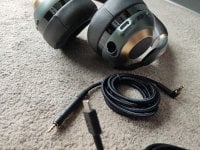 Even if the H3PRO Hyrbid is a well crafted device that delivers quality audio expected from EPOS’ experience in the market, there is one aspect that I consider as being a major flaw. It’s a purely digital headset, without any analogue component , where a chipset powers every aspect of the device from drivers and ANC to audio processing and Bluetooth; and each of these functionality requires battery to operate. This means even in a 3.5mm wired connection mode, you will still need the device to have some battery in it.

Sure, the H3PRO Hybrid does have some decent battery life going for it. A full charge takes around 2 hours and it can last up to 38 hours from that, depending on the type of connection in use. EPOS clarifies that it’s up to 30h of wireless gaming via the low-latency dongle (19h if ANC is toggled). With a Bluetooth connection, that’s up to 38h (22h with ANC on). And with a 3.5mm wired connection can last up to 29h (19h with ANC).

These are great battery life stats and can help provide some peace of mind but there’s no backup plan for a situation where you might have forgotten to charge it up or are travelling and have limited access to a power supply. You’d rather want your power bank to charge your console/phone than your headset.

Even with all of its promising tech and features, the H3PRO Hybrid really feels limiting with its all-digital aspect. Having the option to use the device without charging sounds like a no-brainer in 2022; but apparently it wasn’t a focus for EPOS. And considering the price tag on this device, such an option would be at least expected. This makes the H3PRO Hybrid more of a one trick pony than a jack of all trades that it could have been.

In addition, there are a few additional hiccups with this headset. It still sticks to EPOS’ proprietary connection for the 3.5mm headphone jack which isn’t ideal if it needs replacement. Moreover, given that this device is wireless and travel-friendly, a carry case could have been included (especially with the up-front cost). But none is included here.

If you don’t mind the need for constantly having some battery life in this headset, the EPOS H3PRO Hybrid will deliver on the premium audio and build quality. But at this cost, an analogue wired connection would still be expected, especially given its touted “hybrid” features. 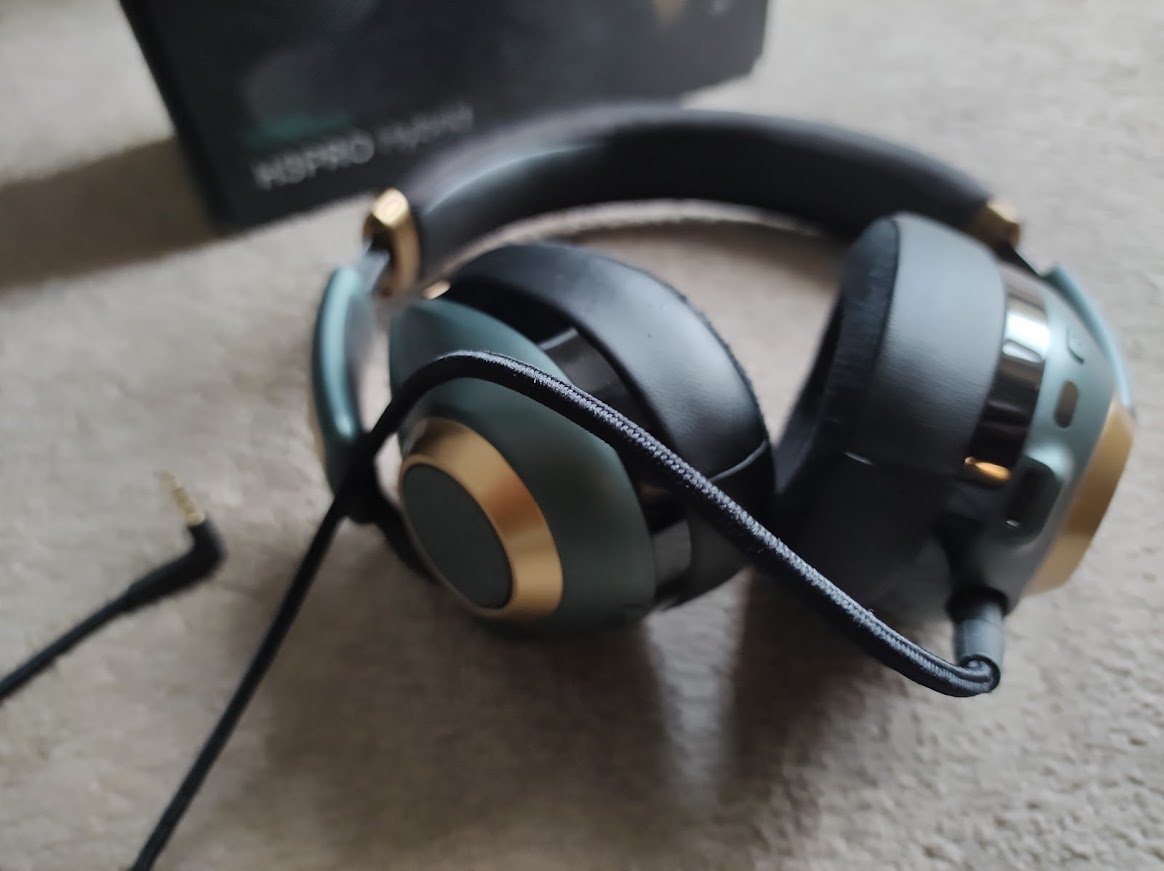