As a hardcore N64 fan I want to get the most out of my retro consoles.
N64 HDMI mods can be difficult and expensive, yet the EON Super 64 requires neither hardware modification nor UltraHDMI levels of cash!

"The EON Super 64, the first-of-its-kind, plug-and-play solution connecting the Nintendo 64 with modern television and monitors" is an incredibly tantalising PR statement for Nintendo 64 enthusiasts like myself. According to their mission statement, EON is a team of just three people wishing to stand at the forefront of high-end hardware accessories to bring retro gaming to the 21st century. Their commitment to guaranteeing outstanding quality and delivering superb aftercare is incredibly humbling and inspirational; as EON have said, "when it comes to quality, accept no substitutes". 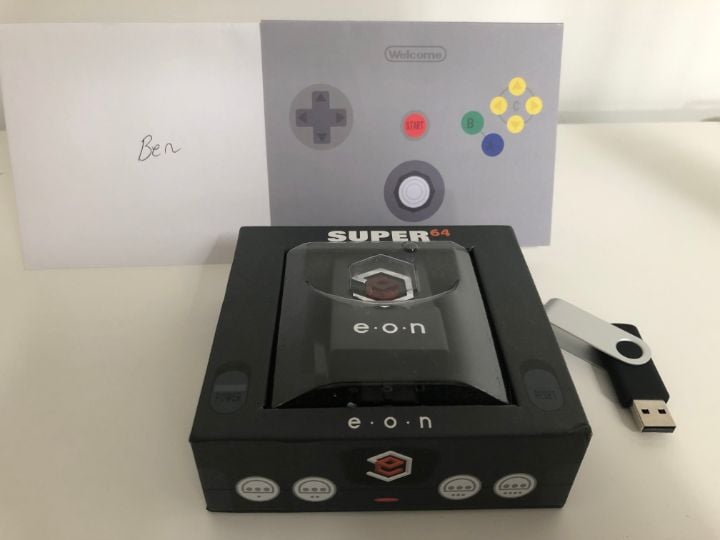 Upon receiving the unit for review I was bouncing off the walls with excitement, the packaging itself a love letter to the 64-bit king with button decals and a vacuum-formed plastic window all perfectly in-keeping with the Nintendo 64's aesthetic. For those who don't know, I have a long and lustrous affair with the N64 that spans its entire lifetime. I was there day one at Toys-R-Us, picking up my preorder for the console, Super Mario 64, and a second controller, readying myself for any friends to play along with me. It was a huge day, and a long evening of gaming on this wondrous new console, and I will never forget it. Back in 1997, I had a whopping 14" colour TV in my room and a VCR I could record my gameplay on. I went all-in on the N64 by systematically purchasing games as and when I could afford them. Wave Race, Mario Kart 64, Lylat Wars (or Star Fox 64 for those across the ocean), 1080 Snowboarding, Goldeneye, and Perfect Dark eventually made up my everyday roster of titles that I could invite friends around for, and we couldn't put them down. I was also lucky to have a group of friends that indulged in the glory of the 64-bit console, and got to swap games with them and experience titles I otherwise wouldn't have been able to afford, such as Extreme-G, Mischief Makers, International Superstar Soccer 64, Glover, Blast Corps, Forsaken, and Killer Instinct Gold. Before long, I upgraded that tiny TV to a supersized 28" one that was as deep as it was wide; it was a hand-me-down, but perfect nonetheless, allowing me to have bigger and meaner battles in Mario Kart and Goldeneye with more screen real-estate per player than ever before. Life was good and 240p/480i was enough to keep us busy for years to come with "Hi-rez" games such as Donkey Kong 64, Majora's Mask, and World Driver Championship. Later down the line, I got an opportunity to buy a Doctor V64 from a contact that a friend of mine knew, and we burned through games at an alarming rate, trying everything the NTSC region had to offer on our little European N64s. Instead of buying every game, I bought the ones I loved; it was a try before you buy method for me that guaranteed I didn't get stung like I did, when rather blindly, buying overhyped yet underwhelming games for the SNES all those years before. Now, some 22 years later, I own a full PAL cart set, a decent little selection of NTSC carts, more than 12 N64 consoles (Funtastics and more), and a 65" 4K HDTV, however I have never put any serious thought to upgrading the N64s or tinkering with them internally in any way. I had toyed with the idea of an RGB modded EU console, and I even looked into the UltraHDMI, nearly talking myself into it several times, but always thinking sensibly that £300-£400+ for a pre assembled Funtastic on eBay was NOT an affordable price to pay, regardless of quality. I just wanted a simple way to connect my beloved Sixty-Four into my HDTV for convenience and some level of HD clarity.

Once I got my grubby mitts on the EON Super 64, I set up my Japanese NTSC console and was straight to work figuring out what it does and why it does it. From what I can tell it's a simple pass-through that upscales a 480p S-Video signal over HDMI, and the best thing about the line-doubling conversion is that it is pretty much lag-free! Unlike the UltraHDMI which outputs up to 1080p, the EON Super 64 doesn't upscale past the console's natural limits. Clicking the button on the rear right switches between slick and regular modes, and with a pleasing click, the blue led is toggled to display the current mode (by default it's always off). When inspecting slick mode up close you can visibly see the number of vertical lines decrease slightly in comparison to regular mode, meaning that the screen resolution loses a few lines off its height in order to compress the image together and then I believe that the EON Super 64 passes some kind of MSAA (Multi-sample anti-aliasing) filter over it to smooth out and jagged edges. The N64 hardware appears to have jagged edges or "Jaggies" due to it simply not being able to output at a high enough resolution for today's incredibly high fidelity monitors and screens, so an after-effect like anti-aliasing interpolates those steps which quite literally smooths them over. 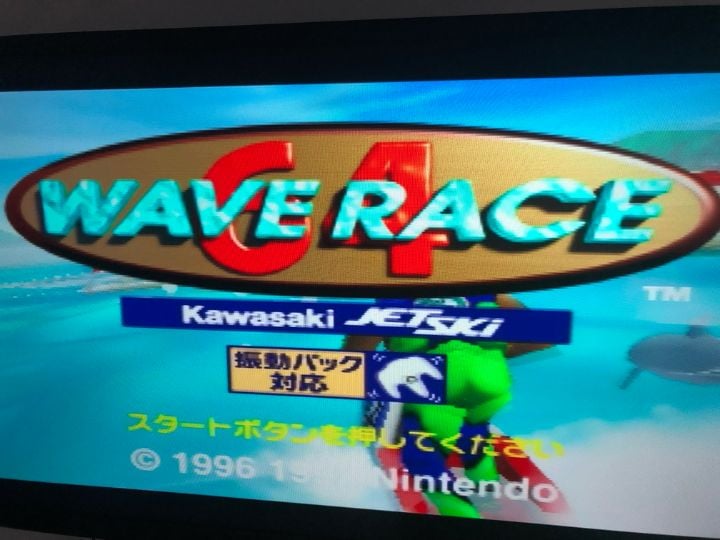 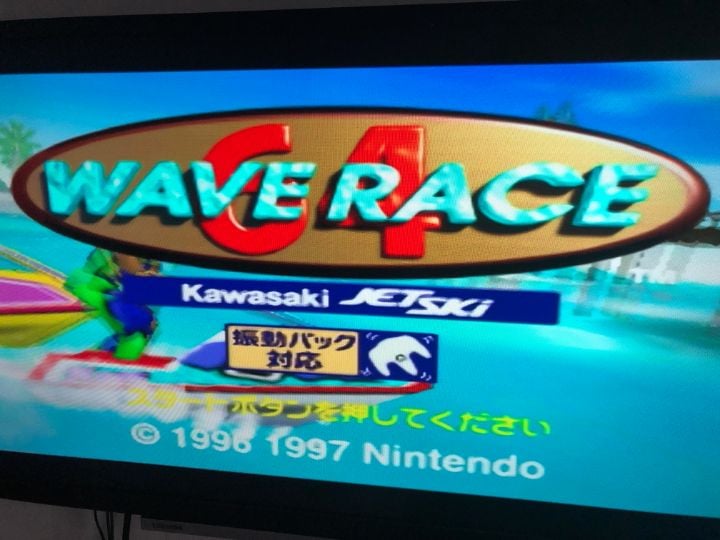 In the past, I have dabbled with AV2HDMI purely for connectivity, and enhanced cables such as ones with a 75-ohm resistor between video and ground to prevent over bright/washed out image, but nothing has even come close to the EON Super 64's sheer ease of use and immediately stunning visual appeal. As a baseline, I decided to test on both a 32" 1080p TV and a full 4k 65" TV, and on both, I was pleasantly met with some super-sexy graphics. For variety, I tested Wave Race 64 Shindou edition, Super Mario 64 Shindou edition, Fighter Destiny 2, All-Star Baseball '99, Susume! Taisen Puzzle Dama: Tōkon! Marutama Chō, and Sumo 64. As expected there are no miracles at work here, no magical fog removal with distance expanding, or even super-sharp upscaled crispness; it's pure HDMI connectivity and far better clarity than any other cabled solution out there in a lesser or similar price bracket. Similar devices range from the £85 RetroTINK 2X to the sublime £270+ Frammeister, both suiting consoles beyond the N64, but the Super 64 is purely driven for a single system, and it excels in the simplicity of what it tries to do.

I could not get any PAL signal games to display at all through the device, be it through passport adaptor and boot cart, or through Everdrive 64 v2.5. What I did manage to do was get a few cheat devices to boot, but again perhaps the region matters on those as menus were either blacked out with sound, or there were very odd black and white text or strange stock images shown that just plain did not look right. It stands to reason that no amount of cobbling together devices would circumvent this NTSC device's ability to display out of region games, as EON has openly said that a PAL version is in the works too. Why this couldn't immediately be a universal device is beyond me, as I really think this should have been achieved, but perhaps that is still being researched and developed for future revisions, and I hope it is, as it's a version I would definitely love to own in future. 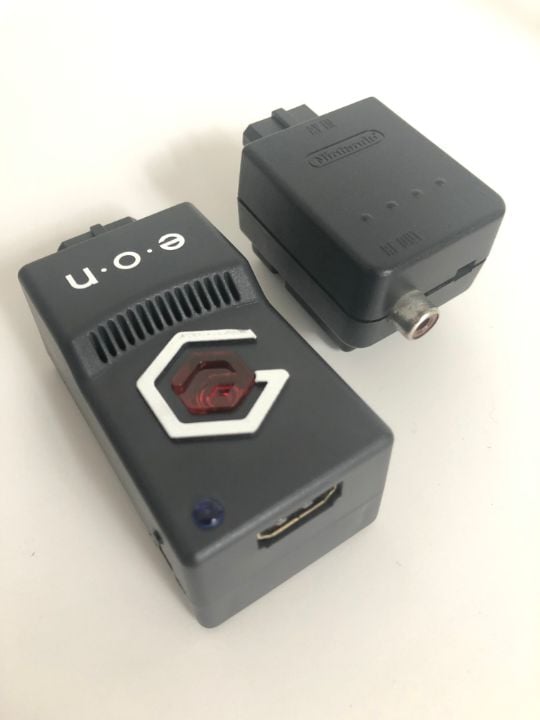 Overall I think this product is superb for the enthusiasts like myself and most retro gamers, however its price tag of £109 GBP makes it ever so slightly less desirable than its nearest competitor, the RetroTINK 2X, which also features a smooth/slick mode, can be used on a whole range of retro consoles, and it's a smidge cheaper coming in at £85. Compare that with the Super 64 not requiring an external power source, its compact size, and decluttered HDMI interface with just one button, and less savvy users may find themselves tempted. I briefly tried it on my NTSC Gamecube too and though smoothing does nothing, I managed to get an HDMI signal through it perfectly, which makes me wonder whether it would also work on the SNES, it too using the same port. Were the price more competitive to match its specific feature set in comparison to its competitors, we'd have one hell of a product on our hands. 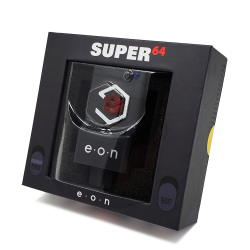