Edifier has been on a roll lately with their wireless earbud options. Releasing revision after revision, we are finally nearing the release of the Edifier TWS NB. But is this the model to buy at release? Let’s find out!

Edifier is a brand that many audiophiles are familiar with. They are the world’s second largest manufacturer for consumer audio. Since its founding over 20 years ago in 1996, Edifier has produced portable speakers, bookself speakers, computer speakers, TV and home theater systems, wireless headphones, earphones and earbuds, on-ear and over-ear headphones, gaming headsets and more. The Chinese/Canadian company’s mission statement is to “. . . prove to the world that China creates high quality electronics that everyone can enjoy.” Well, with such a large variety of products it’s hard to believe that the quality would remain consistent throughout. This review aims to find out if that’s really the case.

Not much is known about the Edifier TWS NB. They were shown at CES 2019 and given to just a select few companies. We don’t know how much they are going to cost but they are projected to be released to the American and Chinese market later this December. I was lucky enough to obtain a pair to review ahead of the release date. If I were to guess, this is the next product in the TWS line of earbuds which range from the TWS1 to the TWS6; while taking the “NB” from their wireless headset line of products. I suppose the TWS NB could essentially be the name they chose instead of the TWS7. I estimate based on their past products in the TWS line that this will retail for about $119. That may sound expensive at first glance, but compared to the $249 Apple AirPods Pro, that’s a steal! 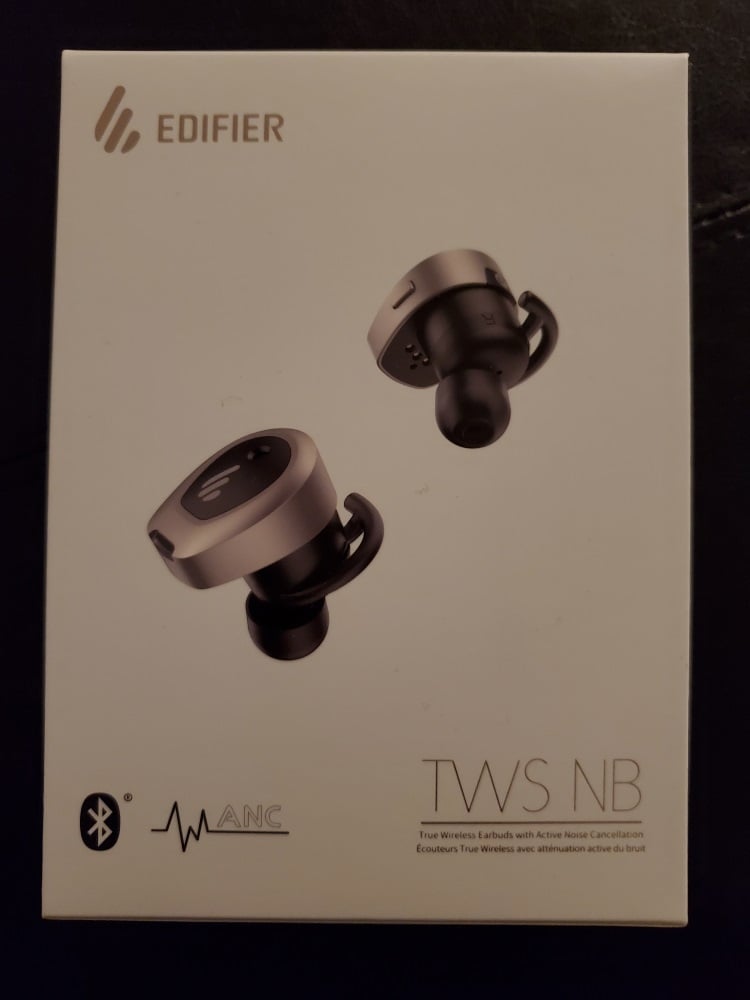 Let’s talk about the packaging really quick. It has a very simple design with a white sleeve covering a black box. The white sleeve has the product photo on the front with the name “Edifier TWS NB” and the product information is listed on the back in various languages. This is a very slick and professional sleeve and removing it shows an equally as cool black box with just the word “Edifier” on it. Within that box are all of the goodies!

The product comes with the earpods themselves and the very cool charging case. The manual, USB-C charging cable, and various ear caps and wingtips are come included in a separate black cardboard box. I was impressed to see five different earpods but I really wish there was a third size option for the wingtips as I struggled with the small and large options I had to choose from—I’ll get to that in a little bit. 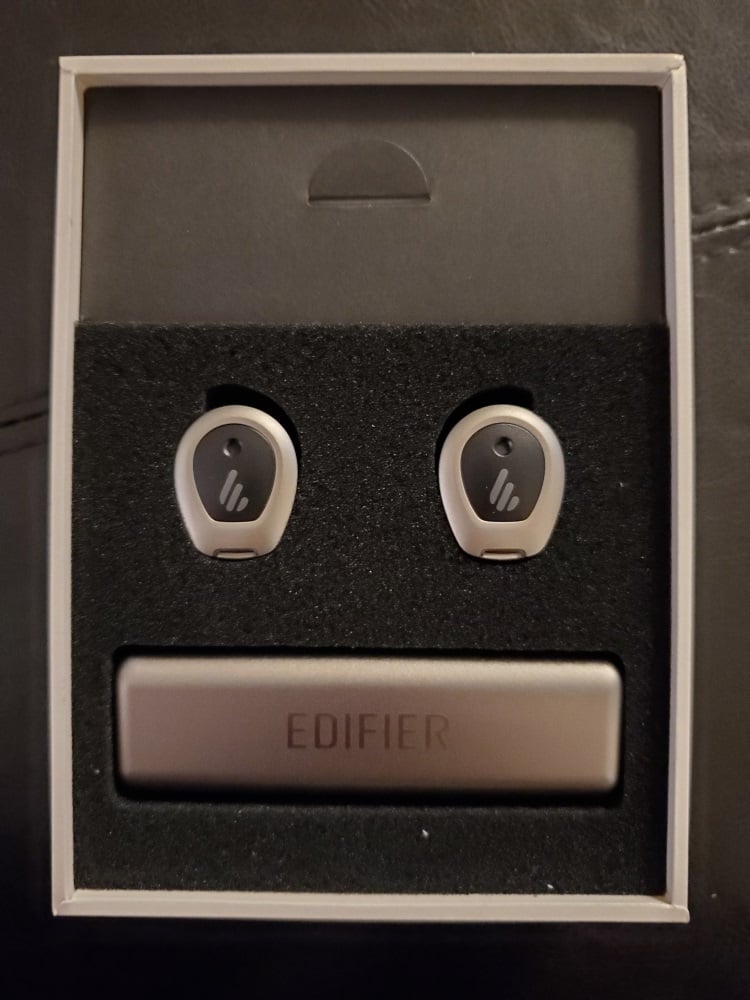 The charging box has a stylish matte texture with the word “Edifier” at the top and the charging indicator and charging port on the back. Because it is silver, fingerprints aren’t noticeable, and the case is compact enough to throw in your pocket, backpack, briefcase, or purse.

The charging case opens and closes using magnets instead of clasps, but the headphones themselves sit snugly in the case by the plastic buckles. Placing and removing the earbuds from the case is a battle of attrition because I felt at first they were going to break with any amount of pressure I put on them. However, the earbuds and buckles are sturdy enough that it can handle the pushing and pulling it takes to move the earbuds in and out of the case. 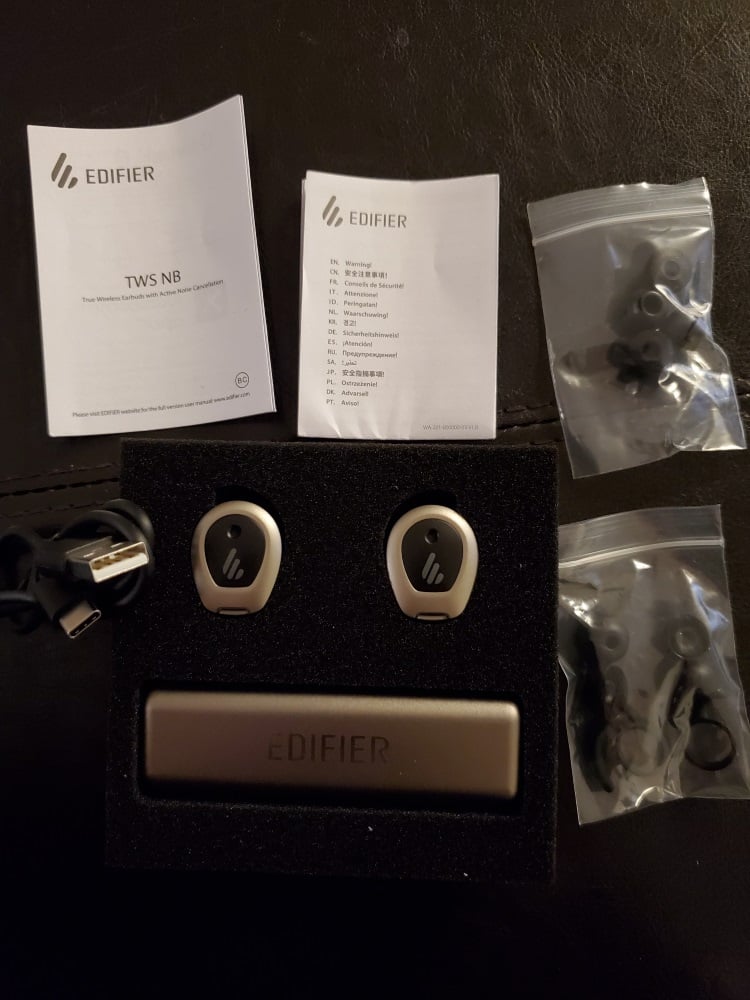 As impressive as everything looks, I have to be a little controversial and say that the biggest flaw here lies with the earbuds themselves. These things are huge and stick pretty far out of my ear. The size is to power the noise cancelling and ambient sound features, while putting a decent quality microphone in it. So, perhaps the bulk is necessary to compensate for all of the amazing features, but I think it looks goofy, nonetheless. Speaking of features, the noise cancelling is relatively strong. Obviously these are earpieces and will never be able to compete with the noise cancelling features of over the ear headphones, but it works surprisingly well for what it is. I try to use these headphones while walking primarily so I used the ambient sound feature much more often than the noise cancelling. The ambient sound feature turns on the external microphone and projects outside noise into your ear. This allows you to listen to music while staying aware of your surroundings and I found that very beneficial. These options, as well as options to pause, restart, replay, and skip music are all controlled by the one button on each headphone. Using the controls is intuitive and the manual explains it very well.

I have been using the TWS NB to make calls lately, and the other line can always hear what I am saying, although they clarify that it sounds like I’m speaking through a tunnel. The microphone cuts out a lot of background noise while talking and of course it isn’t as clear as simply talking without an earpiece, but it is very serviceable. Just don’t get this product if you plan on using it to record professional quality audio. 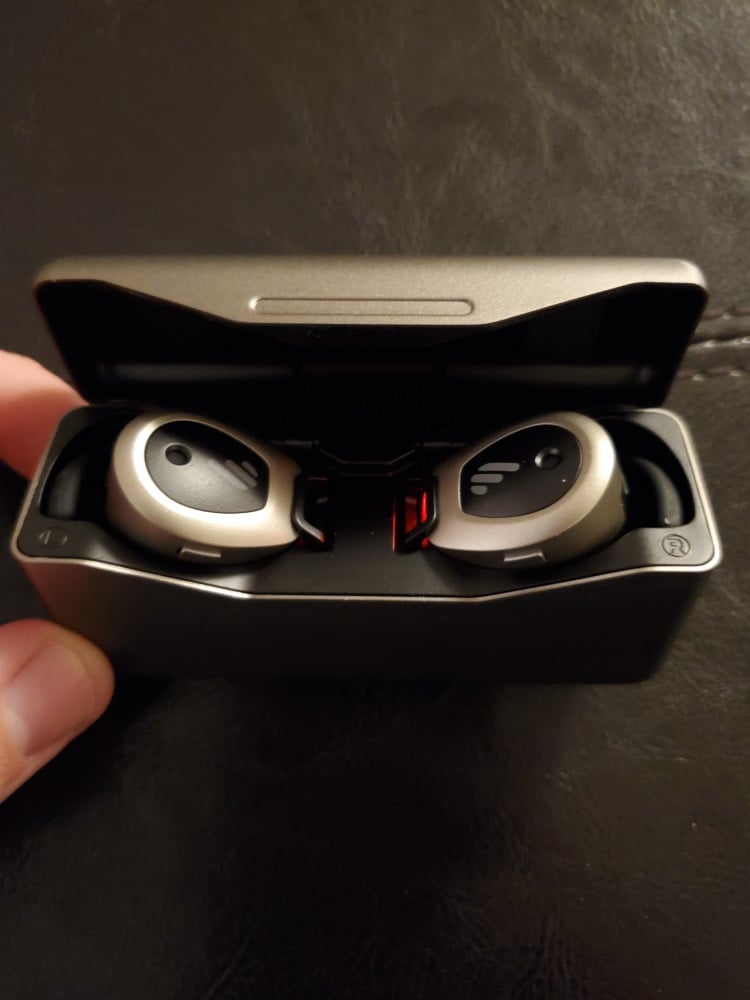 Unfortunately, I have to end this review on a con. I really struggle with keeping these earpieces in place. Because of their bulk they come with wingtips to keep them secured in your earhole. However, they only had two size wingtips and I can’t for the life of me get them to stick in properly. I’m like Goldilocks, one is too small and one is too big, but I can’t find the one that’s just right. This is unfortunate, because when it does work it works very well, but unfortunately I’m too worried about them falling out in public, so I have to stick to using them indoors or in secure areas. As a result, I’ll stick to my wired earbuds for a while longer while outside. 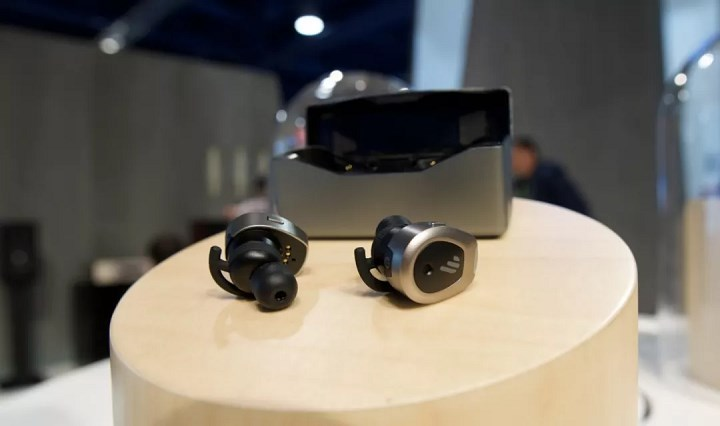