Have you ever wanted to play as a duck that can wear a top hat? How about a top hat wearing duck that has a jetpack, and is wielding a machine gun, while quacking like a maniac? Welcome to Duck Game.

Duck Game, as the name implies, is a game about ducks. Particularly, ones that battle against each other using all manners of weapons, whether they be guns, grenades, or saxophones. The concept is extremely wacky, but incredibly simple. Originally released as a launch title for the Ouya, of all things, Duck Game has made its way to the Nintendo Switch, a console much more suited for the game’s multiplayer hijinks. Existing within a lineup of incredibly fun indie hits like Nidhogg, Towerfall Ascension, Lovers in a Dangerous Spacetime, and Overcooked, there’s a high bar to surpass when it comes to games you can play with your friends.

In the case of Duck Game, it takes that bar, and flies high above it. There's a level of insanity to Duck Game that's hard to put into proper words; when you play it for the first time, you'll have to quickly adapt to the madness of jumping around to avoid an enemy duck holding a machine gun, barely surviving after slipping on a banana, and then dying to a nerf dart shot from the other side of the screen that slightly nudged you off the arena, while hearing your opponent quack repeatedly at your demise. If you're not already sold on the concept, I'll try to break things down a bit further. 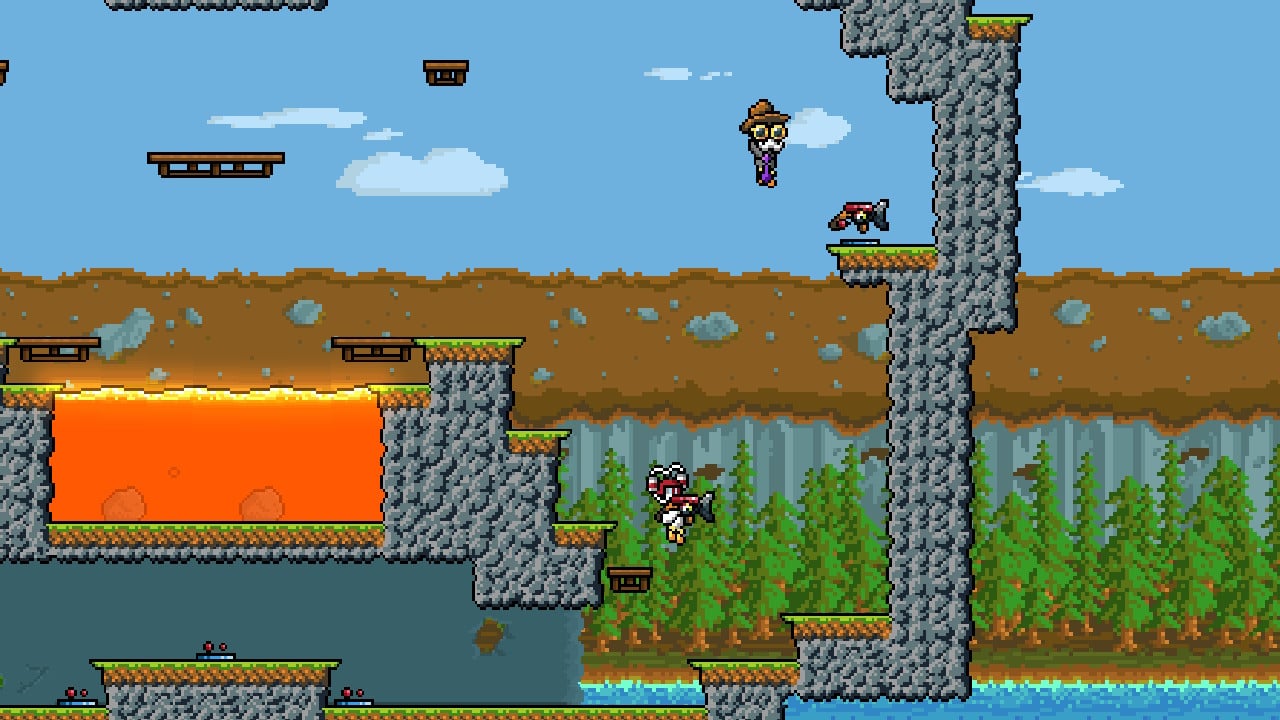 Duck Game is a bit of a 2D action-platformer game, where up to four players can face off against each other, trying to gain the most amount of kills. You die in only one hit, and the last man standing receives a point for that round. Each round will throw you into a randomized level, littered with various means of killing your foes, such as the basics like shotguns, revolvers, and swords, or if you're feeling a bit more creative, missile launchers, nets, magnets, and mind control rays. Getting to a weapon as quickly as possible is one of the keys to winning in Duck Game, so you might have to grab whatever is closest, and hope you're familiar enough with it to take your opponent down. You'll never be able to tell what range of items will spawn in each level, making for a frenetic experience every time. Will everyone attempt to be the first to grab that really cool unlimited shotgun that just appeared, or will someone play it safe and try to plan things out in the ensuing few seconds of chaos and find a better, less desired single-shot pistol? There's a near-endless variety of weapons, all of them hilarious, quirky, and ridiculous in some form, but they're also all viable. Each weapon has a set limit of uses, range, knockback, and other idiosyncracies, so being able to be adaptable, calculating, and strategic are major gameplay factors.

Each round tends to be very short, as most players will lead their duck to an untimely demise in the first few seconds. The game moves incredibly quickly, which makes it so fun to play, as you can jump in for a few quick bouts, or you can customize there to be dozens upon dozens of rounds, for those long party sessions.

If you find yourself wanting to play alone, there's some single-player content as well, in the form of the arcade mode. However, it mostly serves as a tutorial to teach you the ropes for when you do go up against other players. Some of these arcade missions can be really difficult though, bordering on almost impossible to perfect, so if you’re looking to get the highest rank on each challenge you’ll be at it for a while. It’s short, but sweet, and lets you learn how all the major mechanics work on your own through trial and error. 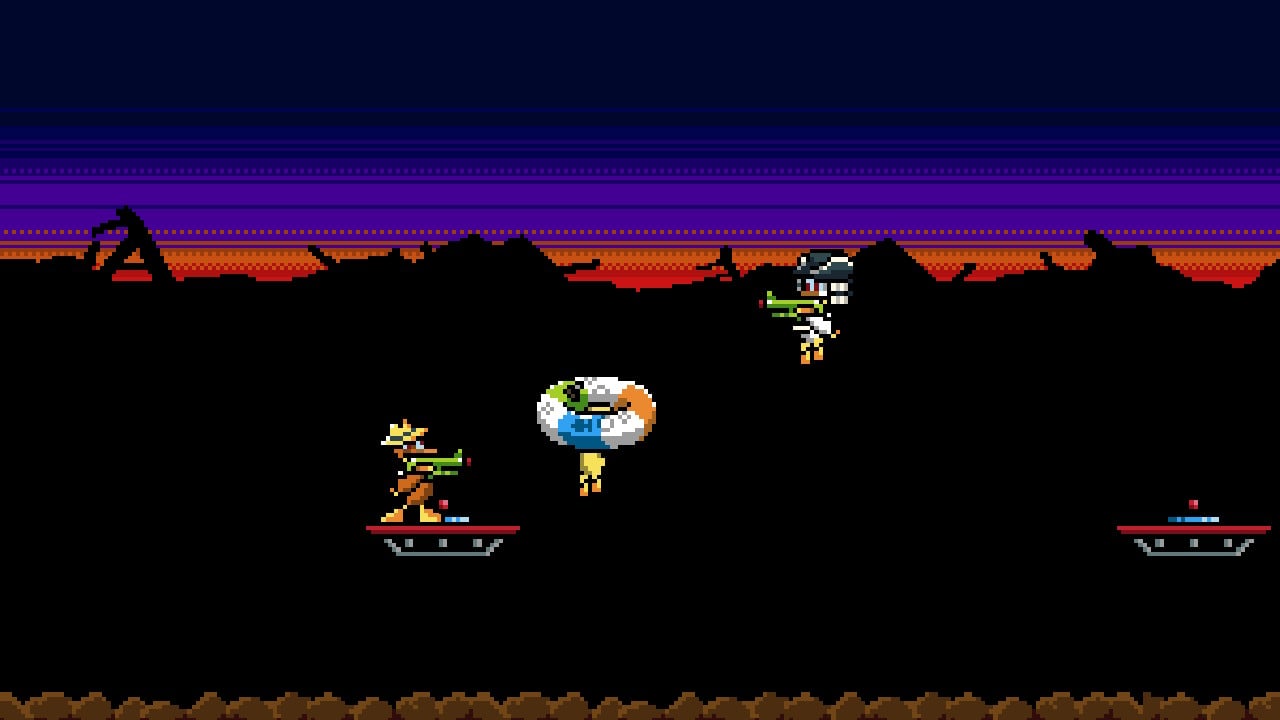 Duck Game supports both local and online play, meaning any and all your friends can have a grand old time quacking it up, no matter where you are. As far as online connectivity goes, this is one of the games that tend to fare better than others when playing with friends across the world on the Nintendo Switch. There were, of course, some moments where I could notice some lag, but on the whole, there were minimal issues when it came to playing online.

The game’s visuals are simple sprites, and everything has a retro vibe to it, which is further enhanced by the music tracks in Duck Game all featuring that familiar synthetic twang soundfont that many will associate with the Sega Genesis. I will always have the lobby music from this stuck in my head. Forever. Permanently. Aesthetically, it’s a game that’s pleasing to both look at and listen to, befitting of the retro-futuristic era that Duck Game uses as its setting.

Not only does it look good, but a large part of the game hinges on you being able to react quickly to what’s going on. A very crucial component to the gameplay is when you have but a split-second to get a grasp on the layout of the stage, see where every weapon and hazard is, and then plan accordingly. Every single sprite stands out; from weapons, to armor, to bananas, you’ll know exactly what they are, because they all look distinct from one another, even during the wildest of mayhem. 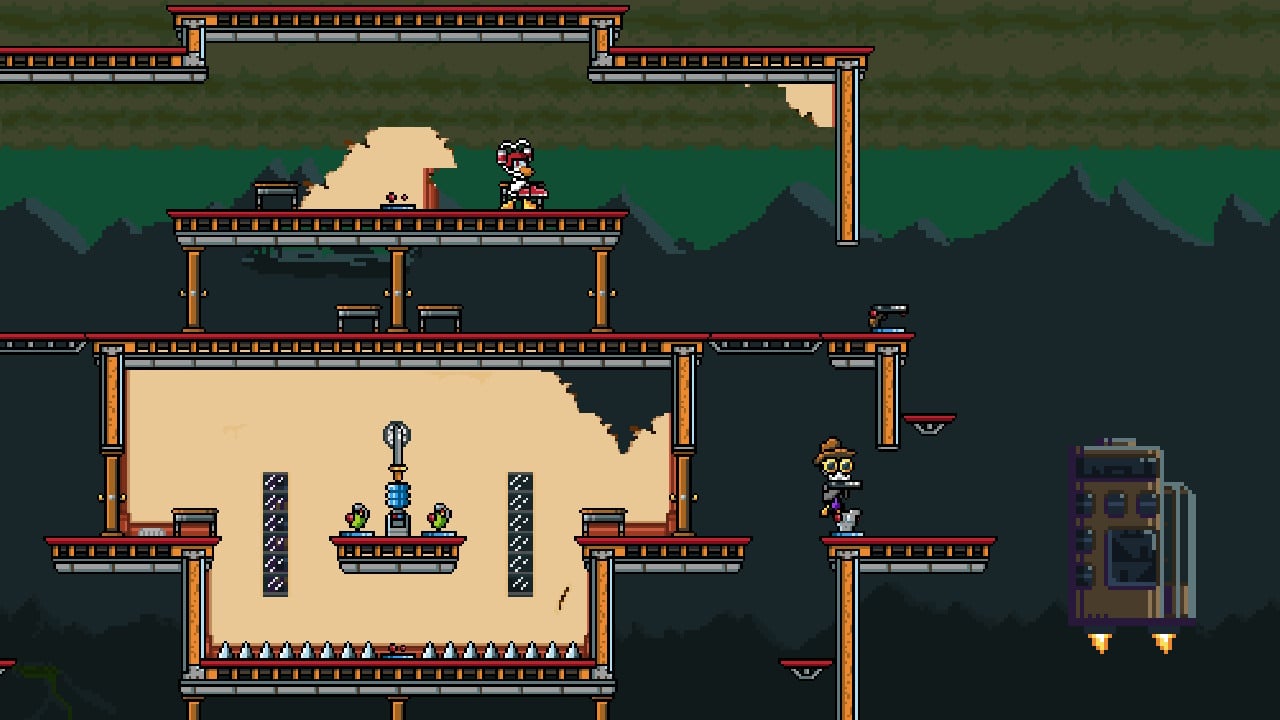 There are also many small details that add to the charm of Duck Game, in the form of decorating your own little lobby with collectibles earned through playing the game, unlocking hats for your duck to wear, or, the most important part; having a dedicated quack button. Finally, there is a video game that allows one to quack at any moment they want. This game just has so much personality and quirky fun to it, making for such a perfect multiplayer game that you and your friends can play competitively, while also being able to laugh at every ridiculous and over the top moment.

When you need to take some time to cool off from the Mario Party-esque rage you'll no doubt be feeling towards your friends, there is a robust level editor to mess around with. Creative players will certainly find many hours of fun in making their own custom stages, where you can set weapon spawn rates, place any type of block in the game, and hide all manners of secret death traps for your friends to walk into. Even after you've exhausted all the standard levels, you can rest assured that there will always be custom levels to amuse and surprise yourself with.

As far as multiplayer games go, Duck Game is one of the best ones out there. I can't recommend it enough, be it the PC or Nintendo Switch version. Putting this on the Switch is a no-brainer, as it's the perfect platform to play such an enjoyable, wacky game with your friends, both locally and wirelessly. Duck Game definitely deserves a spot on any Switch owner's home screen.

Verdict
You, Meteor7, gnmmarechal and 7 others like this.
Unlike this review