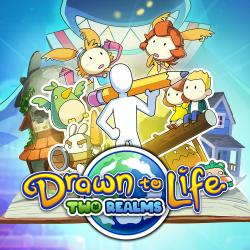 Create your own character, and explore the fantasy land of Raposa in this quirky little platformer. Dive between worlds and use the Book of Imagination to enter the townsfolk's minds to engage in 100 new challenges. Mike has awoken and the Human is revealed beckoning you alluringly, to explore, resolve conflicts, and defeat the evil shadows wizardly overlord: Aldark! 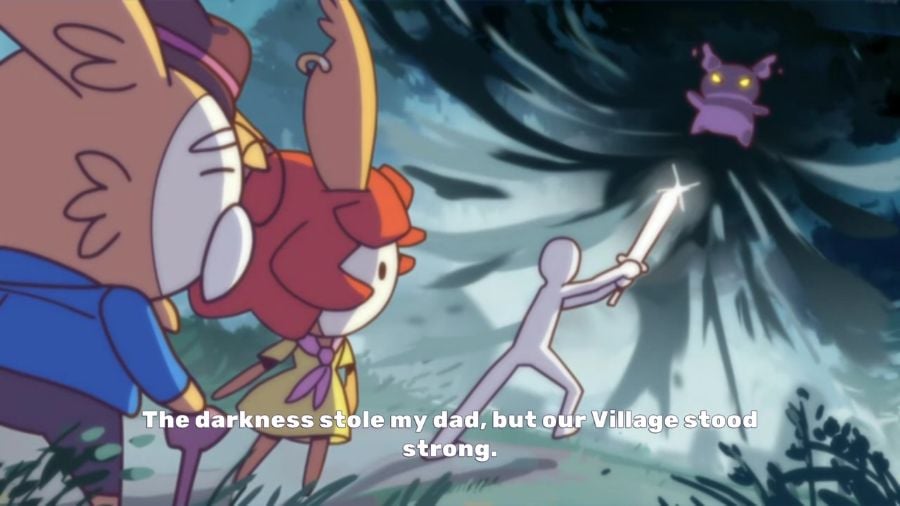 Based on the description above, Drawn to Life: Two Realms sounds great, but in practice, there have been some weird decisions made here that just don't quite gel for me. Characters waffle on, the story is relatively basic and yawn-inducing, yet somehow confusing due to all the lost focus and drivel, and, worst of all, the fully refurbished new creation mode doesn't employ the one thing the Switch has going for it: the humungous touchscreen. You cannot use a stylus, at all. This is a huge own goal for a game based on creativity. In order to make something amazing, you have to endure literal burning pains in your thumb joints while using the analogue sticks to draw. It's a painful experience, mentally and physically.

You begin the adventure with a totally blank slate, a character that you can design, it can be anything you like as long as it fits within the humanoid constraints of a head, two arms and two legs. It feels wonderous that you can do this, and that the game can include your very own creation as the character at all. Breaking it down, you have a mannequin character that you design two-dimensional elements on like stickers placed over the main skeletal features. You have a range of parts to pick from should you not wish to get in deep and draw you own titular hero, but that takes away from the creativity, so I dove in. For the purposes of the review, I immediately called upon the super sexy image that is TEMPY. I began by roughing out the shape of his head, adding ears, crafting the quiff, and painstakingly cleaning up the edges with the smallest possible sized eraser tool. It felt like I was using the most remedial version of MS paint money could buy. The editor technically does everything you need, altering cursor speed, undo and redo, swapping between brush sizes and selecting from a select palette of colours, but for something that is supposed to be so free-form, it's all too clinical yet inaccurate in its methodology. 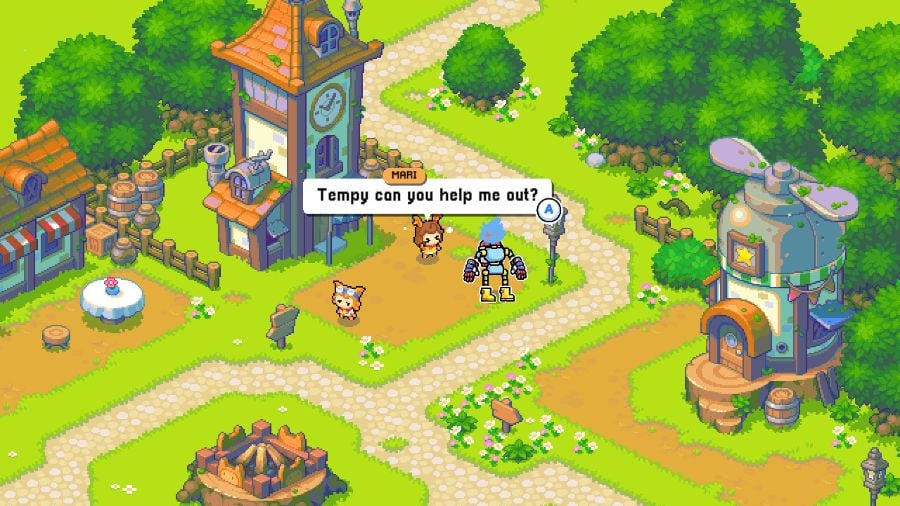 The whole process is frustratingly draining if, like me, you just want to get your vision down from your grey matter to the screen. I kept trying to touch the screen, poking listlessly at the colours and brush options, hoping it had to be a feature they had included but alas no: touchscreen is out the window. Instead, you have to painfully, and I mean painfully, attempt to draw circular shapes with the analogue dexterity of your thumb. For our older readers: it's like using an Etch-a-Sketch for the first time and realising that drawing anything circular was going to be an absolutely abysmal experience. I persevered with it and after several attempts and hundreds of undos, I managed to get a vague likeness down and honestly gave up with any idea of getting the pale blue and white outlines included at all. I kept it simple and settled for what I consider to be a ham-fisted job that could only be done better if you spent absolutely ages dobbing on each individual pixel. I don't get why we couldn't simply choose from a full colour-picker to get any colour your heart desires, and let us touch the damn screen. Limitations on creative freedoms make no sense to me and only serves to fuel my discomfort with the editor. I defy you to draw anything as good as any of the stickers and items you find or purchase around the towns and shops. It's just not possible. Having got the face down, I honestly lost all interest in customising the rest of my "Hero". I opted for whatever gloves and boots I could slap on the blank spaces, and proceeded to name it Tempy. For what should be an enjoyable opening to this game, I was already on the back foot, entirely miffed at the draining experience I had. 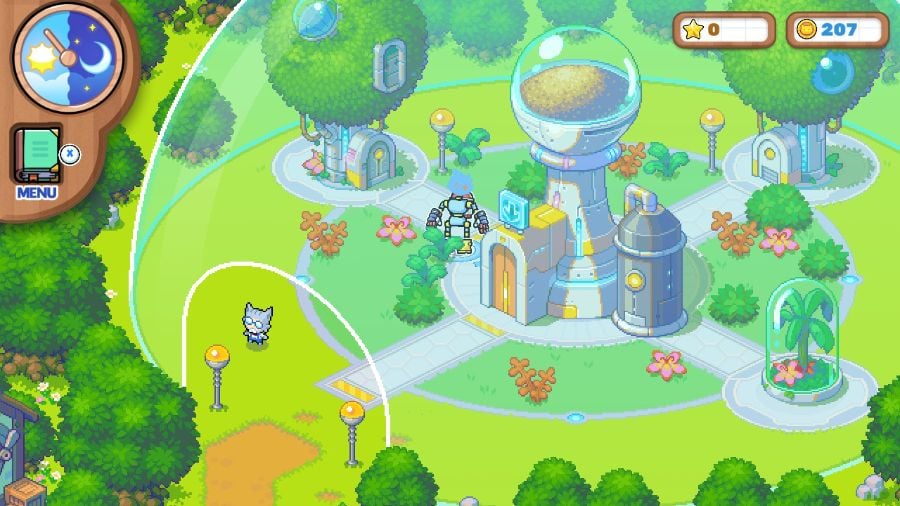 Graphically, the overworld environmental backgrounds are wonderful. There is some really nice artistry at work here and the quaint farming towns have a warm, humble feel that starts the game off nicely. Belleview is your first location and serves to let you wander around in the "human world", talking to people who seem to like to drone on about their dreary existence. Each character is relatively unique with a lot of creativity going into the diversity of NPCs, but the majority have next to nothing going on. You can go around and chat to them if you want, but it won't further your understanding of the storyline in any way. Simply follow the blue arrow around your feet and jog to the next objective to power through and avoid time-drainingly long dialogue sessions.

The 2D sections, as you progress, contain an increasing variety of items to deploy in the editor sections, but only relevant pieces, not the entire library. Typically, you do a couple of levels of short lightly puzzling platforming, and then the final level is one you have to edit in order to complete. This final stage is invariably the more taxing of the group with a more lateral thinking approach per stage depending on the pieces you have available and the design of the tiny little sandbox-style landscape. You can wall jump, body slam and slap your way through the stages, but all the while I felt like this was an aggravatingly poor Super Mario Maker clone. The physics and level design are extremely basic, and the overall impression I had was that it feels just very lacklustre. I was quite disappointed with the platforming as overall it was more of a chore than an adventure. The isometric overworld was far more fun to explore, but there was hardly anything to do other than scout out secret parts and coins to spend. 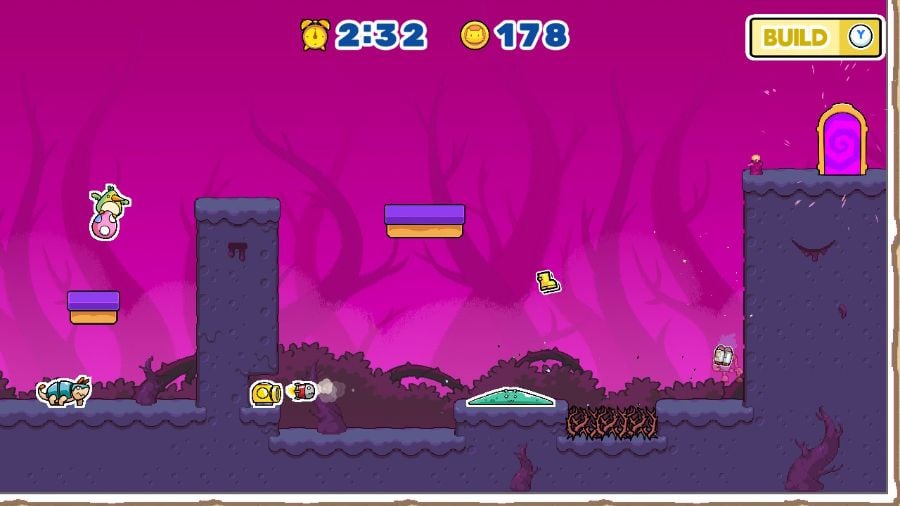 The music is nice throughout. I mean, really nice. It's chilled, it builds tensions when needed, and it tootles along nicely in the background without agitating you and stressing you out. As there is no voice acting, there is no real persona to inhabit the majority of the characters. I suppose it's similar to how you would read a book in silence, giving each character a distinctive voice and building a mental image of their traits as you learn more about them through the journey of the narrative. Drawn to Life gives you the images and leaves the rest up to you to make enjoyable. It may be a "beloved franchise", but I feel it's a niche franchise, and, sadly, one that only hardcore series fanatics may enjoy. It does what it says on the tin: platform, puzzle, adventure; however, it doesn't particularly excel at progressing or pioneering anything within any of these broadly sweeping genres.

Drawn to Life: Two Realms is definitely a game for a younger audience in my opinion, and I personally didn't find much enjoyment with it, which is a huge disappointment. To be honest, I would also find it difficult to recommend to a younger demographic due to the repetitive and monotonous nature of the gameplay, but if you break any two-dimensional platforming game down to its base elements of jumping and running, you can make every game sound boring. What differentiates one game from another is essentially a spark of a certain something to get you gripped and raring to complete it. For me, Drawn to Life:: Two Realms is missing this spark, and ends up feeling like a weirdly average flash game of yore, and will unfortunately forever be relegated to the depths of my review pile, where I will probably never pick it up and play it again.