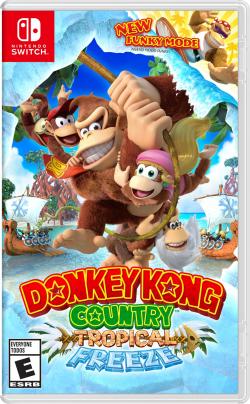 It's time to return to Donkey Kong Country and save your home from the clutches of nature's most evil and nefarious creatures: Penguins. Let's take this journey and find out just how well this new addition stacks up to the classic titles this series is known for.

Donkey Kong Country: Tropical Freeze is the latest in the series, developed by Retro Studios. Originally released on the Wii U, it’s nice that it finally came to Switch so people will be able to try it out. I actually originally avoided this title, under the assumption it wouldn’t live up to the older games. Seeing it on Switch I knew it was time to give it a chance and see how it is.

Donkey Kong Country: Tropical Freeze starts out with with the Kongs having a nice, simple birthday celebration for DK. Unfortunately, looming just off the shore is an armada of nature’s most fierce and territorial creatures: penguins. That’s right ladies and gentlemen, we are in fact trading in beavers and bees for penguins and owls in this title. After being blown off of their now frigid island, the Kongs have to fight their way through several islands full of nasty new threats and enemies to reclaim their lost home. 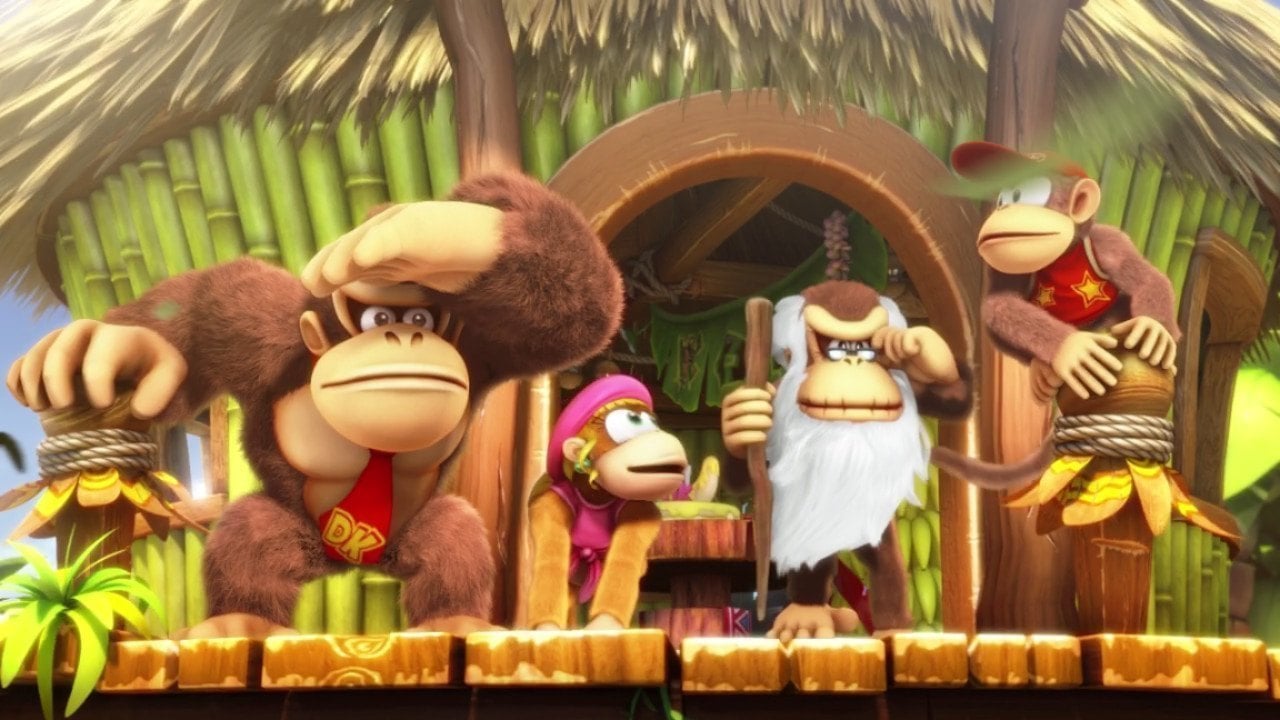 Right off the bat you’re given a choice between two difficulties, which is always nice. An improvement over the original Wii U title is a new “Funky Mode”, which allows you to play as Funky Kong. Funky has a total of five health and significant amounts of movement options to compensate for the fact that he is the lone hero of this new journey. Funky is able to blitz through levels with ease, and access every nook and cranny while doing it.

The original mode from the Wii U also exists, where you play as DK and are assisted by Diddy, Dixie and Cranky. Each of the three Kongs serve to enhance DK’s movement capabilities, as well as adding a two HP buffer on top of DK’s own two health points. If you lose two hitpoints, you lose your companion. Sadly for fans of the original series, you’re unable to play as the three assisting Kongs without tremendous effort unlocking a special mode, or playing in multiplayer. Out of the gate I found this to be the weakest part of the game, and a bit of a strange design decision given most people favoured the other Kongs over DK in the original games.

DK definitely still has a familiar heft to him, which ends up feeling clunky at times when trying to execute things quickly without a companion. There were more times than I cared to count where I’d attempt to roll+jump for an extended jump, and instead DK just lazily hops off the ledge to his death. In general, it’s fine and you’ll get used to how he plays. But again, it’d be nice to have the option to be one of the more agile Kongs right off the bat.

Once you’ve decided your play style, it’s off to the races. In typical Donkey Kong Country fashion, you traverse from level to level, and finish off the island with a boss fight. Levels are crammed full of secrets to find, like alternate exits to different levels, bonus games, and even some simpler nods to previous games which are always fun to find. Every level also has the classic K O N G letters, and medallion pieces to discover. It’s actually quite difficult to find them all as well; some are very cleverly hidden and require very keen eyes and exploration to 100% a level. 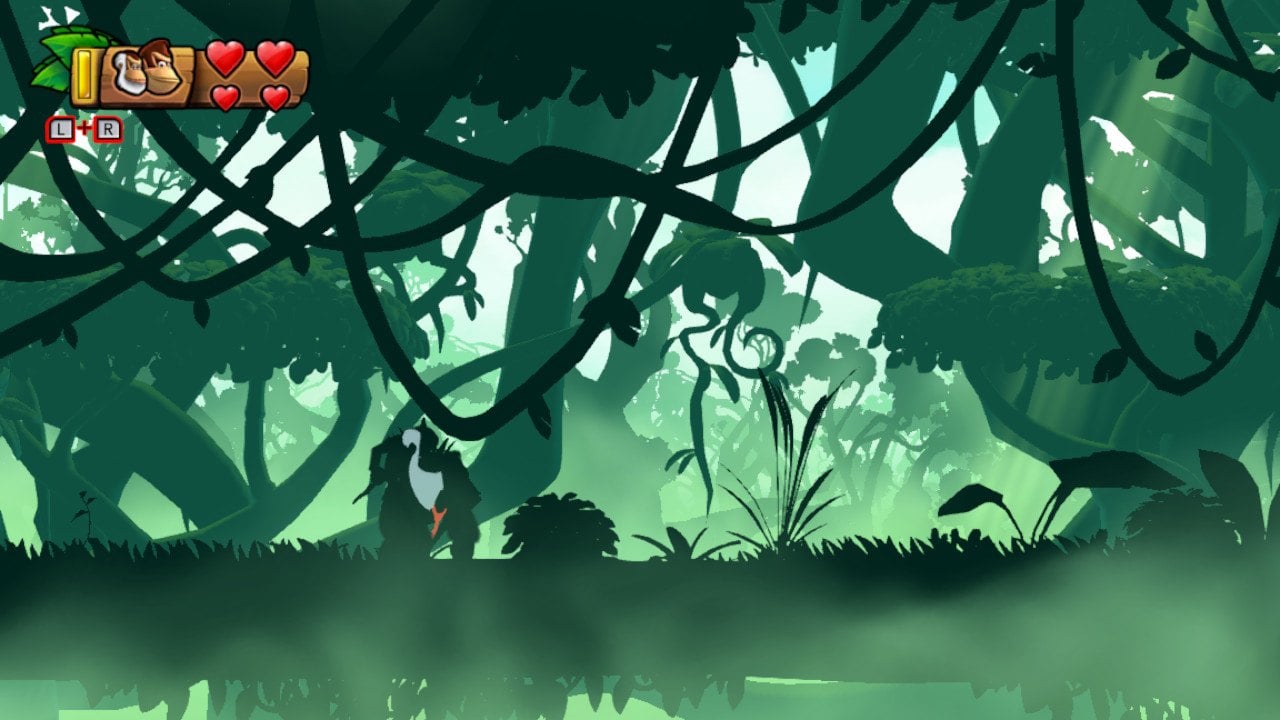 It was quickly quite apparent why this version included an easy mode. This game is not afraid to kill you. It’s not uncommon to drop several lives to get past a section, especially on later islands. I wouldn’t consider myself amazing at platformers, but i’m certainly no slouch given I’ve been around them for 20+ years of my life. But there were sections where I was rapidly dropping lives. Luckily the game is pretty generous about giving you more lives to keep you going, and there is a store that allows you to buy lives or goodies to bring into a level to turn the odds in your favour.

On top of the classic minecart levels returning, you also have new additions this time. Which consists of a fairly similar log ride, as well as flappy-bird style rocket segments. These add a nice level of variety to levels, which also often times will have fun and interesting ways to spice things up and keep you interested in seeing more. It’s also worth noting that the classic barrel blasting is back to frustrate and infuriate you as you attempt to perfectly time those presses to keep going from one barrel to the next. 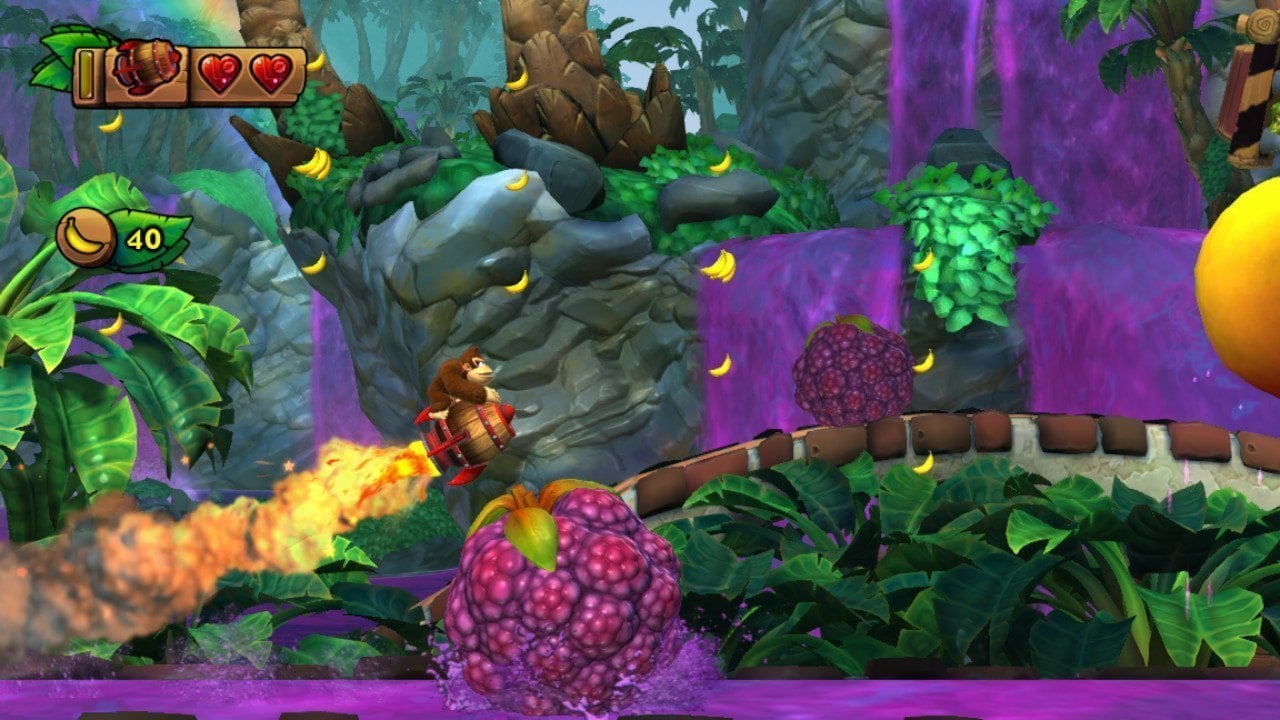 Bosses at the end of each island are all unique and fun to fight. Each having their own distinct fighting style to keep you on your toes as you continue to free islands from the clutches of those wretched penguins.

That does bring me to probably one of my bigger complaints, though it’s perhaps fairly minor in the grand scheme of things. Aesthetically the game looks great. It’s very well defined so you aren’t often tricked by the scenery into plunging to your death, and rich but not so cluttered as to cause a visual overload while traversing. However most of the enemies really don’t feel very Donkey Kong Country-esque. They’re by no means poorly designed, but I feel like in this one specific aspect the game really doesn’t capture the charm of the kritters, gnawty, zingers or otherwise. It’s a bit of a departure with really none of the more iconic enemies showing up. Nor do any of the new additions really stand out stylistically.

I’m glad to say however, that the music does not disappoint. Just like older titles, Tropical Freeze has a fantastic soundtrack of funky beats and catchy jazz tunes to keep you hopping from level to level. They really captured the essence of what made the older titles awesome to listen to. Sound design overall was really on-point and definitely a highlight. 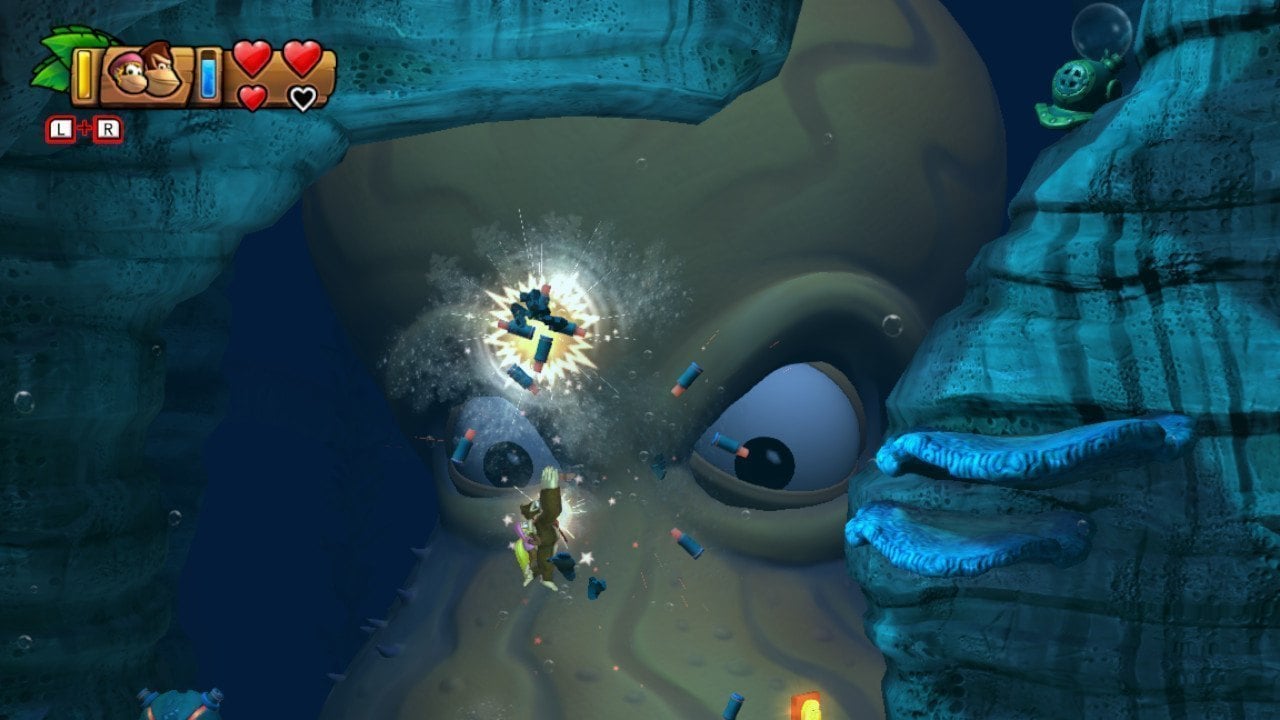 Overall I was honestly surprised by how much fun this game was. Aside from enemy design, they really captured what made the classic titles so beloved. From the funky atmospheric tunes, to a tough but fun difficulty curve, and levels jam packed with goodies to explore and find. I can easily recommend this title to fans of the series, and it runs great on the Switch. The addition of Funky mode was a solid choice for people wanting to experience the fun of Donkey Kong Country, without experiencing all of the (at times) brutal difficulty, and still capturing the fun of exploration and platforming. It’s a little disappointing not being able to truly experience the classic Kong dynamic, but it’s still fun to play as DK and have the option of enhancing his movement with the other three Kongs to better traverse each level.

Verdict
You, damiano2712, supergamer368 and 3 others like this.
Unlike this review