Log in Register
Menu
Install the app
You are using an out of date browser. It may not display this or other websites correctly.
You should upgrade or use an alternative browser.
Official Review Retro Updated 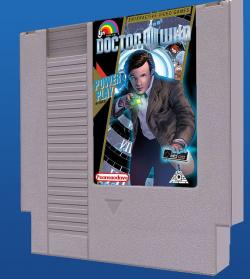 Single player
Local Multiplayer
Online Multiplayer
Co-operative
Doctor Who for the NES is a hack of the 1988 Nintendo Famicom release, Cosmo Police Galivan. As the Doctor, you must defeat many familiar enemies on a quest to save the world.

Overlords of foreboding cyber planets seem to have a knack for staffing convoluted mazes with an assortment of odd creatures designed to slay at every turn. Cosmo Police Galivan takes all of these things, and more, and combines them into an 8-bit action-platformer with RGP-like elements. Exclusively released in 1988 for the Nintendo Famicom in Japan, CPG combines Metroidvania level design with action reminiscent of early NES platformers such as Castlevania and Strider. 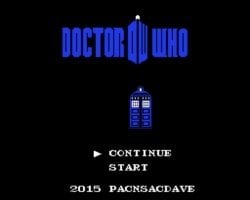 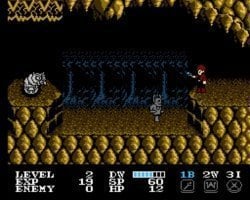 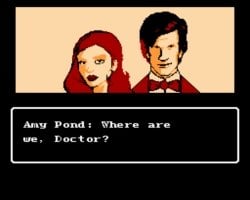 Doctor Who retains a few parallels to the gaming elements that CPG incorporates. The Doctor travels to distant worlds, fights a strange assortment of creatures, and gets mixed-up with overlords bent on world domination. Perhaps these are some of the reasons this game was chosen for a ROM-hack. In regards to the hacked elements, the released game includes mostly sprite-hacks, such as graphics for The Doctor and popular enemies such as Cybermen and Daleks. It even includes a sprite of his loyal robot dog, K-9. The game’s text appears to be a rewrite of the the original English translation hack to include Doctor Who story elements, such as references to sonic “weapons” (screwdriver attachments), and the Doctor’s name in various conversation bubbles. The few cute scenes, by comparison, have been heavily altered. They now contain images of the 11h Doctor and Amy Pond having a conversation about saving the world. In addition to these changes, a palette swap brightens up most areas, but impacts the story with contradicting information, such as using the beam to open red colored doors, which are now yellow in color. Besides these few and most basic changes, the game remains identical to the original from level design and weapon usage, to boss battles.

The game is broken up into 6 areas that utilize relatively straightforward platforming design elements. As The Doctor, you will explore each area with Metroidvania “backsploration” level hunting. As you transverse elevators, pitfalls, secret walls, and locked doors, you will progressively move towards level-completing boss battles. With each enemy kill, you will gain experience points that are automatically applied to both character and weapon improvements. This is where the RPG-like elements come into play. For The Doctor, these level upgrades will result in a more powerful character by increasing your hit point and “sonic point” reservoirs. The “sonic points” will be used by all items, and having a larger reserve to draw from becomes important as some items double as special attacks. The original game’s sword attack as been sprite-swapped to look like a sonic screwdriver. This attack continues to function and upgrade in the same way as in the original game. Depending on which sonic screwdriver is selected, points will be issued for each kill that when maxed out will raise the attack by one of three levels, with each maxed out weapon doing double the damage of the previous weapon. The Doctor can carry one weapon and two items at a time. Weapons and items can be quickly selected from the inventory screen and it is possible to swap between them on-the-fly. 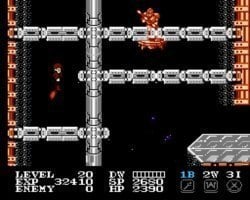 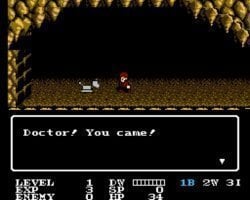 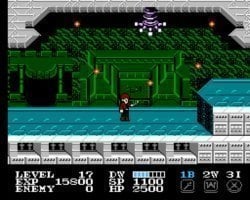 Cosmo Police Galivan did not reinvent its genre nor did it create any new gaming elements. Those that it does incorporate do not always work well together. From the very start the game feels confusing to navigate. Elevators shafts, doors, and backgrounds are extremely similar between different areas. Managing to not get lost becomes dependent upon memorizing the direction you came from, so when you return to the same area you can hopefully recall where you have already been. Platforming elements are hindered by poor jumping mechanics and hidden dangers that include invisible pitfalls and small sections of ceiling that cause damage. Attacking is fairly straightforward and makes extensive use of simple patterns. Most boss battles can be won the first time as patterns constantly repeat. The range of the sonic screwdriver "sword-like" attack is short and coupled with the poor gaming mechanics, can add a level of frustration to most action scenarios.

Leveling up both the Doctor and his weapons becomes an exercise in patience. Experience is gained only a few points per kill and it will take hours of grinding to sufficiently upgrade in relation to the challenges each specific area provides. If you do not make use of certain spawning enemies, you will end up spending more time leveling up than it actually takes to play through the game at full power. Comically, there are ways to do this without any interaction. For example, there is an area in level 2 where wasp-like flying enemies drop from the ceiling two at a time. This area is excellent for “farming” experience points. Utilizing a controller with auto-fire and a rubber band, it is possible to fully upgrade the Doctor with the TV turned off. Once you fully level up the Doctor or the current weapon, the level of difficulty drops substantially. 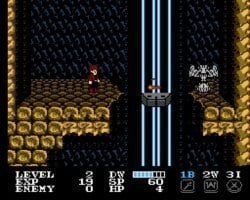 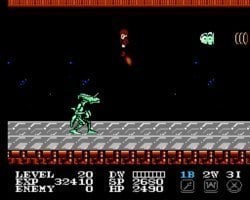 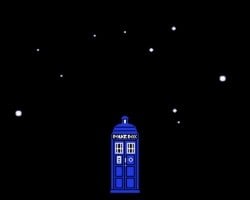 As easy as it is to complain, there were moments of enjoyment and entertainment. It’s not that Cosmo Police Galivan is a horrible game, it is just not an excellent game. It tries very hard to successfully merge many gaming elements but ends up hurting itself with poorly integrated mechanics. The Doctor Who hack adds an interesting twist to the graphics and story, but does not expand with any ASM hacks that could have put it over the top. If you are a fan of retro gaming, you may find something fun in the challenging quirks of this game. Doctor Who fans that are interested in owning this game, rest assured it is a high quality reproduction down an original shell and new label sticker. It would make a nice addition to any obscure retrogaming or Doctor Who collection.

Cosmo Police Galivan suffers from poor gaming mechanics in an otherwise interesting merger of action-platforming and RPG-like elements. This Doctor Who hack brings new sprites, English text, and palettes to a previously Famicom-only release. Those serious about retrogaming may find enjoyment in this game's mechanics and quirks. There is just enough here to entertain, especially if you are a fan of The Doctor.
Reactions: bradzx, kudofan, Jiehfeng and 2 others
Share:
Facebook Twitter Reddit Pinterest Tumblr WhatsApp Email Share Link
I am really don't understand why this game already release cart and not ips patch. I do really want play this game so badly on my computer for emulator.