Cheap and portable Bluetooth speakers are a dime-a-dozen these days; every company has their take, whether it's tiny, pill-shaped, waterproof, or just really loud. They're speakers, and they do what speakers tend to do best: play music. However, there's a little company out there that's looking to create the "evolution" of portable speakers, by adding in a rather interesting feature: sprite art. Think of the Timebox Evo as a modern equivalent of the Lite-Brite, with a speaker attached.

Having grown up playing 16 and 32-bit games, I can recall having spent countless hours playing around with Microsoft Paint or Animal Crossing's shirt designs, trying to make my own sprite-art, meticulously attempting to draw each pixel-square perfectly. To me, and likely many others who had those same experiences, there's an allure to the retro look of sprite artwork. That's why the Divoom Timebox Evo stood out so much to me, when I first laid eyes on it. While this is a product of many features, such as an alarm clock, a speaker, a personal assistant, and a sleep aid, most importantly, it's a canvas for your creativity. 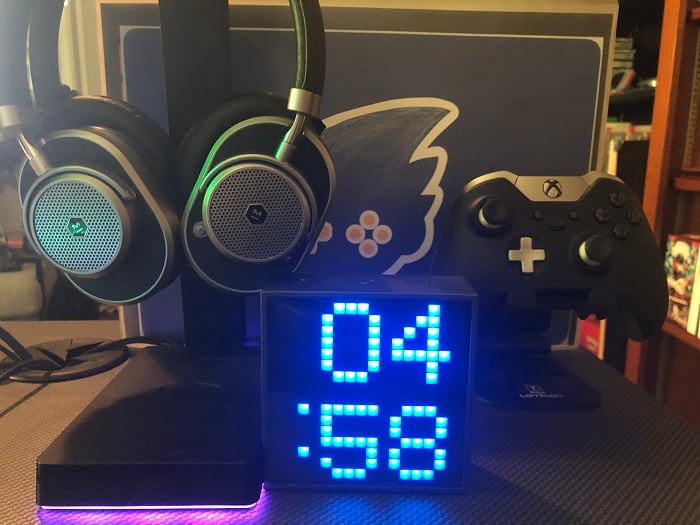 Measuring in at about 4 inches tall, the Timebox Evo is small enough to fit in your hand, but has a screen large enough to be clearly visible. When holding it, you can tell there's a definite heft, and it feels nicely built. The sides of the device are coated in something akin to a matte rubbery material, and while you would never want to drop any electronic, it could cushion a short fall, should an accident happen. There's a power button on the right side, while the top has buttons for play, vol up/down, brightness, and clock. I've never made use of these outside of pressing power to turn the Timebox on or off, since you can control everything within the app, but it's good to have if you need to change something and are within arm's reach. The LED screen itself is bright and colorful, and has a screen protector placed over it, in order to keep the front scratch-free. I found that, on average, if I didn't keep the Timebox plugged in and instead used it in portable mode, at max brightness and with a constantly-moving image, I could get about 6-7 hours out of the 3000mah battery.

On the back of the device is the speaker, which can be classified as "simply alright". It won't win any awards for high-quality sound, and audiophiles won't be dancing in the street praising it, but considering the price point and featureset of the Timebox Evo, the speaker alone isn't the main appeal here. Songs sound fine when played over Bluetooth, though considering you're going to be displaying the LED screen towards you to look at, the speaker portion will be pointing away from you, which isn't an ideal setup. However, there's not much to be done about that, without compromising the overall look of the Timebox--if it really bothers you, you can turn it around so the speakers are facing frontwards when playing music. While there's not much to write home about in terms of sound quality, the Timebox can really blast things when it comes to volume. A couple of times, I forgot that I had the speaker connected, and I'd click a YouTube video, only for it to be heard echoing halfway across my house. If you're in need of something that can really crank it up and play loud, then you'll be satisfied on that front.

Now, this is where we get to the fun stuff. When you turn on the gadget, it'll boot directly to a digital clock screen, and that's just about all you can do with the Timebox--at least until you download the Divoom Smart app from either Google Play or the App Store. From there, you simply pair your device, after which, you unlock a bevy of settings. There are a surprising amount of different things you can do; as I mentioned before, there's a setting for alarms and voice-memos, but you can also use it to see your local weather, act as a calendar, display a scrolling word, alert you when your phone has a notification, play music from radio channels, and, most amusingly, play Tetris. 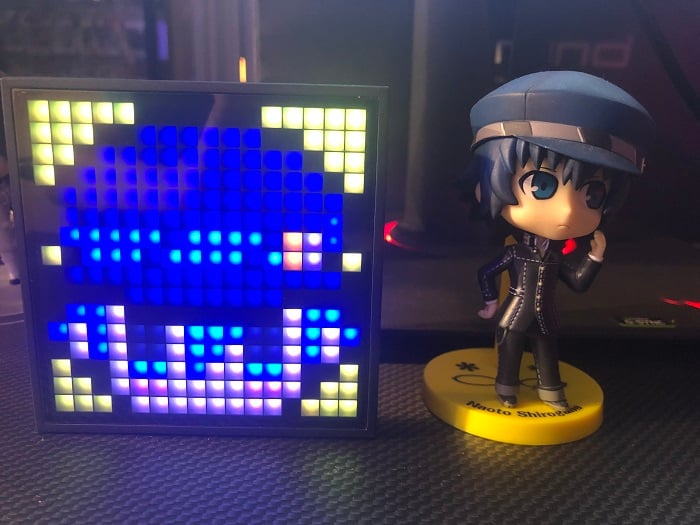 By turning the Timebox to its sleep mode, the lights will gain an orange hue to them--in the same vein as f.lux--and a customizable list of soothing sounds will play in order to help you fall asleep. I didn't expect to really make use of this function, but I have to admit, the sounds were warm and calming, and I ended up dozing off shortly after. And after you've slept, the Timebox can also wake you with its alarm setting, making it a nice little accessory to put on your nightstand. During the day, it can display pixel art, at night, you can set it to play music, ambient noise, or podcasts, and in the morning, it'll show the time and help get you out of bed.

All these bonus functions are great to show off the Timebox as a novelty item, and some of them are genuinely useful, but I always find myself using it to display pixel art. You're given the freedom to create your own drawings, or choose from hundreds of existing animations and static sprites. You might be wondering where do all these premade options come from, to which Divoom has curated a list of artists and other users in order to form a community of creators. Whenever you create a new drawing, you can post it to Divoom's online gallery, which is viewable in their mobile companion app. There's already a wide variety of shared artwork, all sorted into different categories, ranging from nature, to animations, and of course, video game characters. 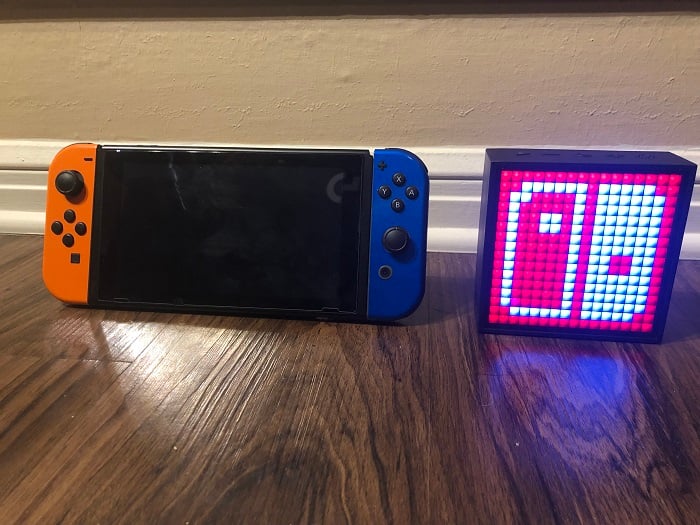 The drawing tool is nice and has everything you'd need it to. A grid will pop up on your phone, alongside a color wheel, and other basic art toolbars. You're then free to draw anything, so long as it stays in the boundaries of the Timebox's 16x16 screen. There's also an option to add multiple frames to your art, if you intend on making an animation; for example, I tried to re-create a running Sonic sprite. Afterward, you can then save the design to your profile and display it on your Timebox, whenever you want. It's all very simple and easy to use, yet has the deeper editing tools that more experienced users can make the most of.

Overall, I absolutely love the Timebox Evo. It takes two concepts I love--LEDs and pixel art--and mixes them into a single product. On top of that, you get a decent Bluetooth speaker, and a range of fun novelty features, of which some are genuinely useful. For me, a price point of $49.99 felt reasonable, and my only real complaint is that I hope that Divoom releases a product that can support a larger canvas than 16x16, in the future. Even so, I highly recommend the Timebox Evo, especially for those that love to play around with pixel art. 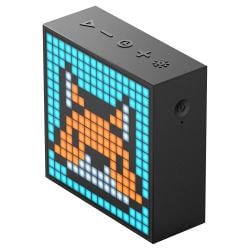