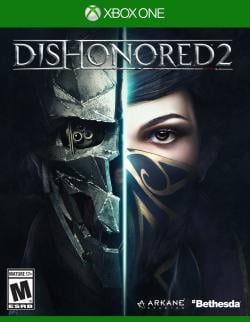 Four years ago, Arkane Studios brought us a brand-new series in the form of Dishonored. The game was a creative take on the genre, giving players the choice to either sneak their way through exceptionally designed levels, or slaughter every enemy they came across by using all kinds of magical powers. Now, Arkane Studios is back for more, with the release of Dishonored 2.

The game takes place 15 years after its predecessor, and while it’s highly recommended that you play the first game beforehand, to appreciate references and the lore, knowing the backstory isn’t essential for this adventure. Previous protagonist Corvo is the Royal Protector to his daughter, Empress Emily Kaldwin, and the land she rules over, Dunwall, has been thriving in a time of peace. That all changes, however, when the Duke of a faraway country, Serkonos, visits Emily on the anniversary of her mother’s death to bring her a gift; the previous empress’s long lost sister and “rightful” heir to Dunwall. Emily and Corvo are then the victims of a coup d’etat by the Duke, the sister, and a group of corrupted individuals, and must flee Dunwall, being labeled as disgraced traitors. The characters escape to the land of Serkonos, and try to find a way to reclaim the throne, as well as discover the mystery behind the late empress’s sister. 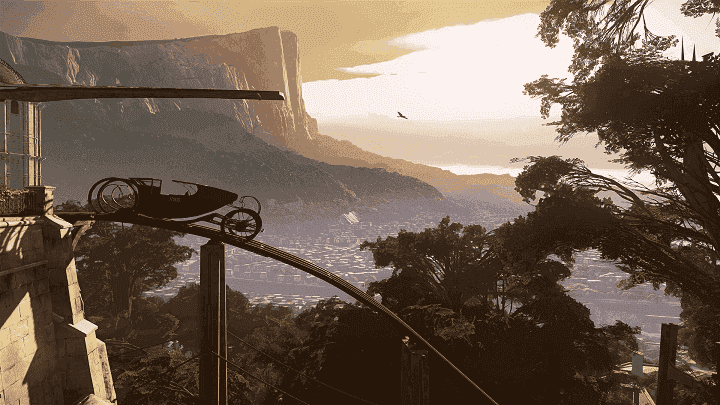 It is here that the game offers you one of the biggest new features, the choice to play as either Emily or Corvo. However you will not be able to swap between the two in a given playthrough, as the choice is permanent until you begin a new save file. While the basic gameplay mechanics remain largely unchanged, the two have widely differing movesets and methods to taking down or sneaking by your opponents. Both characters wield a sword, a silent crossbow that can put people to sleep, or cause fires, a pistol, and smaller grenades and traps that help you accomplish your missions. However, Emily and Corvo’s differences become apparent once you are granted supernatural powers by the Outsider. Emily can link people’s fates together with the Domino power, so that if one linked individual dies, so does everyone else. Corvo’s Slow Time ability returns, and can once again be upgraded in order to eventually stop time completely for a short duration. Each power can be leveled up by collecting runes, blueprints, and bone charms which are scattered within every level. It’s a great way to reward players that go out of their way to explore every nook and cranny. Returning fans will be glad to hear that their no-kill runs have gotten a bit easier, with the ability to parry a guard’s attack and quietly knock them unconscious. Long gone are the days of having to waste a precious sleep dart and run, or kill them outright and reload the save file. Should veterans be looking for a more difficult mode, you can forgo the special powers, and rely only on the basics. This “No Powers” mode is a nice addition, forcing players to really take in their surroundings to find the best path possible, as most shortcuts won’t be available without access to those powers. The game offers a wide array of options and choices for players, and allows for a lot of mixing-and-matching up different playstyles to see what works best for you. Each level is large and open-ended enough so that you can replay them multiple times without retreading the same ground. It’s a fantastic way to increase replayability. 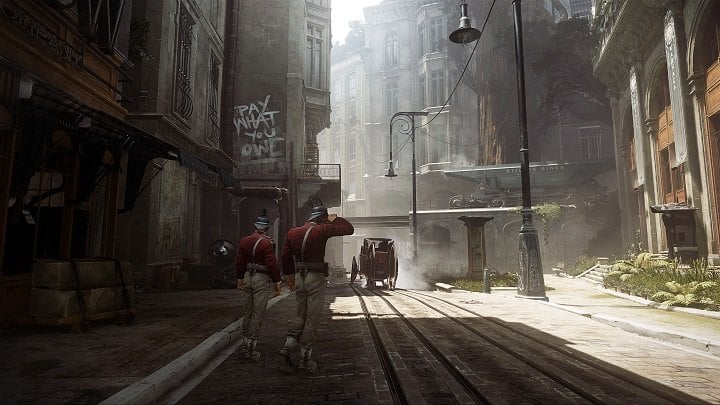 Not only are there different ways to play the game, but there are also different outcomes of the story, depending on how you decide to tackle each mission. If you take a more chaotic path and kill everyone you come across, the world will reflect that, becoming darker and filled with more danger. When you complete a stage without being seen, or killing anyone, the world will be more hopeful, and you will have less obstacles to overcome. Emily and Corvo’s reflective dialogue in-between each level will also change depending on your methods, once again lending to the game’s replayability factor.

The presentation of Dishonored 2 is its weakest point, though it is not terrible by any means. While the game definitely looks pleasing graphically, with its Victorian-steam-punk art style and boasts a wider variety of colorful locations than the first entry, character models retain that typical “Bethesda charm”, and appear lanky and awkwardly animated. Voice-acting is also sub-standard, with only the protagonists really having a semblance of emotion to their voices. Spoken dialogue would also get cut off frequently, with characters suddenly interrupting their initial sentence in order to start another one. Although the game looks good for the most part, it’s also a problem, because if too many enemies engage you in combat, the console versions of the game will take a steep dive in terms of framerate. It’s acceptable, but not optimal. 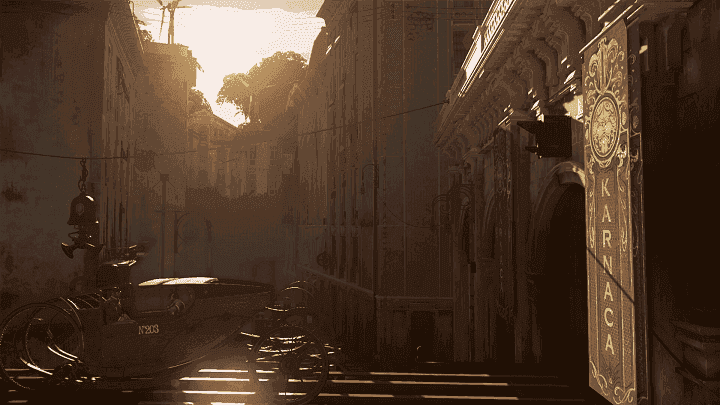 Dishonored 2’s story can be summed up with a single word; revenge. The two main characters don’t have much of driving force besides that, but at the same time, they don’t really need much more reason to go from Point A to B than that, despite it being a bit of a cliche. The details behind each mission are given to you in a brief run down before each level, but if you take your time to read some of the books that are abundant in each area, or quietly tail guards and listen to their conversations, you can learn important things about the world, your objective, and other characters. The subtle storytelling here is a great addition for players that want to invest themselves more in Dishonored 2’s lore.

All-in-all, Dishonored 2 is a sequel that takes the groundwork from its previous entry, refines it, gives it some more polish, and adds upon what made the first game so good. Just like Dishonored 1, this game is absolutely brilliant.

What We Liked ...
What We Didn't Like ...
9
Gameplay
This game has exceptional gameplay, ranging from the insanely well-detailed environments that you get to explore, filled with interesting puzzles and paths, to the choice of being able to tear through guards with an arsenal of fun magical powers, or using them to sneak by undetected.
7
Presentation
Serkonos is a beautiful looking world, and a lot of effort has clearly gone into the architecture and design of each level, but it's hampered by framerate issues and lifeless, monotone voice acting. Sound mixing also seems to have been done badly, and subtitles are a must if you want to know what's being spoken.
9
Lasting Appeal
Arkane Studios has done a wonderful job of meticulously creating these expansive areas for players to explore, and combined with the multiple paths and ways to take targets out makes for a game that players can experience many times without becoming bored.
9
out of 10

Dishonored 2 takes everything that made Dishonored 1 great, and improves upon nearly every aspect. With a wealth of different ways to play, as well as fantastic level design dotted with collectibles, this game is sure to please returning fans and newcomers alike.
Reactions: Red9419 and T-hug
Share:
Facebook Twitter Reddit Pinterest Tumblr WhatsApp Email Share Link
Looks like they polished it up from the rushed demo they showed at e3
Reactions: Chary

Joe88 said:
Looks like they polished it up from the rushed demo they showed at e3
Click to expand...

Absolutely. It was looking pretty bad, but they managed to turn it around completely by release date.
I loved the first one. Replayed it multiple times, got all the endings...
I can't wait to get this one.
Reactions: Chary
I'm on my second run now, high chaos with Corvo and it might be my personal GotY.
First run was pure stealth no kills or powers and it took me 19hrs.
Second run is high chaos trophy clean up and I'm halfway through in half the time.
The gameplay is fantastic whether high or low chaos and the attention to detail in enviroments is incredible.
I'm also playing on a PS4Pro now and notice load times are way faster then the standard PS4 and I have seen no framerate issues.

Oh and I thought mission 7 was amazing!
Reactions: vonfnas and Chary
Dishonored 2, still better than yo kai watch 2...
Reactions: Deleted member 370671, DaFixer and Chary
Great review, still I must play the first one.
I will also get this one, if it get cheaper
Reactions: Chary
Next month, Dishonored 2 will offer even more options to play your way. In a free update, Dishonored 2 will include a New Game + mode and new custom difficulty settings. We’ll have more details on the content of this update (including the exact release date) in the coming weeks.

https://bethesda.net/en/article/6d1WZlmqe4sUmkQEAo2qSe/dishonored-2-play-your-way
Reactions: Chary and smileyhead
cant wait for it to be cracked
Reactions: PaBo and smileyhead
@T-hug you completed it in 19 hours?!
ATM I'm at 20 hours, and I just started the sixth mission xD

vonfnas said:
@T-hug you completed it in 19 hours?!
ATM I'm at 20 hours, and I just started the sixth mission xD
Click to expand...

Yes but I was just getting through as quick as I could I didn't really explore or anything as that was for my high chaos run. Interestingly my second run time is already past my first even though I know what to do in each mission, the amount of stuff to find in each level is insane!

Noctosphere said:
cant wait for it to be cracked
Click to expand...