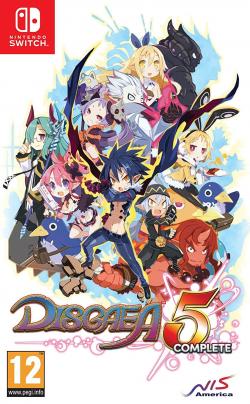 One of the best strategy RPG's has made its way to the Nintendo Switch before the 4 millionth Fire Emblem could. Rest assured, I'm here to tell you why you should care way more about this game! This is Disgaea 5: Complete!

Right out of the gate, Disgaea 5: Complete gives you access to all the season pass content of the original release on PS4. This allows you to obtain a ton of past Disgaea characters to add to your party, access to a ton of extra playable stages and sets you up to play the game a bit more casually out of the gate if you choose to. For the purpose of the review, I went ahead and played the game with a ton of the DLC characters to move through the story a lot faster. Keeping in mind that while this does make the game a LOT easier since you have access to incredibly powerful characters very early, you still can level progress with them and have an overall enjoyable experience. That being said, you may want to hold off if this is your first time playing the game, so you don't kill the Disgaea experience for yourself.

For those unfamiliar with the Disgaea story, the game takes a more serious tone and follows Killia, a mysterious demon with an enflamed passion for revenge against the menacing demon emperor, “Void Dark," and his terrible army known as “the lost.” With the help of Seraphina, the beautiful and rich Overlord of Gorgeous, you’ll form an alliance of those that wish to dismantle Void Dark’s hold on the netherworlds.

Disgaea is the epitome of Japanese over-the-top storytelling, and it's beloved for it. It's serious moments are enthralling, and its insane comedy is incredible.

The Switch version and the PS4 version have virtually no differences, and that is saying a lot for the scale of the game being on a hybrid handheld device. Aside from some slightly longer loading times, the game looks, feels, and plays fantastically on the Switch. Much like the PSP/Vita ports of Disgaea games, the Switch port of 5 is a wonderful transition.

One feature I was particularly happy with was the in-game achievement system, which replicates the trophies earned in the PS4 version to make up for the fact that the Switch has no achievement system. Some users may not care as much about such a minute little addition, but it made me feel like I was accomplishing just as much in this game as I did in the original version.

To pull back a bit and introduce Disgaea to those more unfamiliar with it, Disgaea is a more over-the-top grid based strategy RPG then your average Fire Emblem. The gameplay of Disgaea 5 is largely unchanged and instead just adds a few more interesting mechanics. The new revenge mode for overlords adds more craziness to the maps, along with some devastating new attacks. Red Magnus’ Super Olympia for example, causes him to grow into a giant for three turns and lets him pummel enemies with massive damage. Revenge is obtained by a small gauge on your characters status page, which increases whenever teammates are attacked or vanquished. Revenge can be battlefield by all characters which gives various bonuses, but only the Overlord characters can utilize special abilities in revenge mode. Revenge also increases your critical rate to 100%, and all abilities will only cost one point from your SP gauge.

Revenge can also be used to initiate Squad attacks. Squads can be formed in the hub world when unlocked, and Squads allow you to perform various tasks both on the battle field, and around your hub world. When a Squad Leader is in revenge mode, a Squad attack can be initiated, which allows you and any members of your squad to attack a multitude of enemies at one time! Revenge also extends to all the DLC characters as well, so they fit right into the newer mechanics of the game wonderfully.

Squad assignments vary from capture squad, which allows you to capture enemies for possible recruitment later, or even large squad, which automatically makes characters giant when they first enter a map for three turns. Other mechanics return to the game, including dual attacks, tossing and throwing, monster transformation, classes and upgrades and more.

Where previous games allowed you to abuse leveling and buy overpowered weapons quickly, Disgaea 5 sought to rebalance the item shops and gameplay to make the experience a bit more challenging. That isn’t to say that you cannot do the typical protagonist kills everything story and continually grind your characters to overpowered strengths, but it does do a good job of toning that experience down a bit to a less grind heavy pace. This can be a wonderful thing for newer players to the series, and veterans can now enjoy the added DLC content for a unique experience.

The main campaign is still 16 chapters long, each with their subset of stages. The DLC adds another 12 or so sub-chapters that each have a unique story experience for recruiting past characters. Originally the game had a decent pace and was still hours long, and now the complete version adds even more hours to your overall playtime.

For those who owned the original PS4 version, you may not see an overly enticing reason to pick up this version of the game. However, as anyone who has been playing these on the console and then playing the updated ports to a handheld, this game is no exception to the replayability rule. Disgaea 5 is just as fun, runs just as well, and feels just as good on Switch as it did when I originally played and reviewed it.

Verdict
You, splymb, TheVinAnator and 5 others like this.
Unlike this review